In Extremadura we stay just north of Trujillo which is a central position from where you will discover the delights of this unique area. Extremadura has vast areas of open grassland steppe and hundreds of square miles of dehesa.

Dehesa is by far the most dominant feature of Extremadura. It is a multifunctional cultural landscape comprising of open woodland, combined with grazing pasture. The trees grown in dehesa are oak, some cork but mainly holm oak. This is home to Spain’s most iconic domesticated animal, the Ibérico pig, which wanders among the oaks feasting on the sweet acorns, giving the ham its unique flavour. Local breeds of Cattle, Sheep and goats also graze the land and fertilize the soil. Dehesa supports many species of birds, insects and mammals. 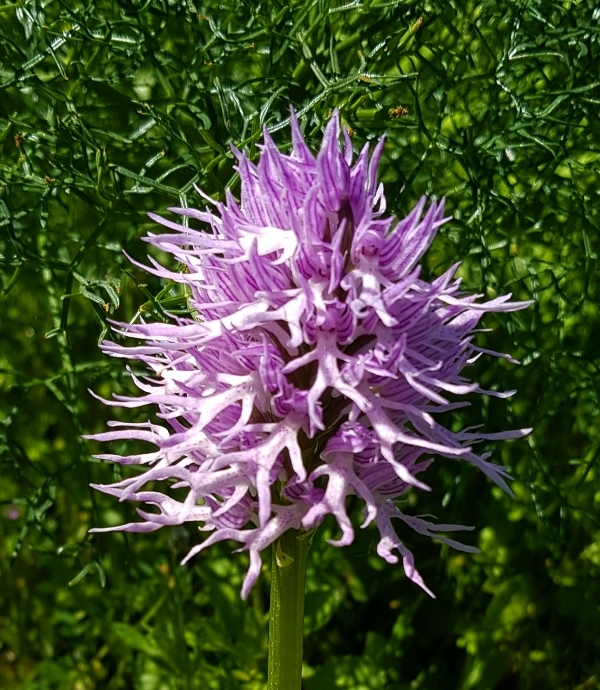 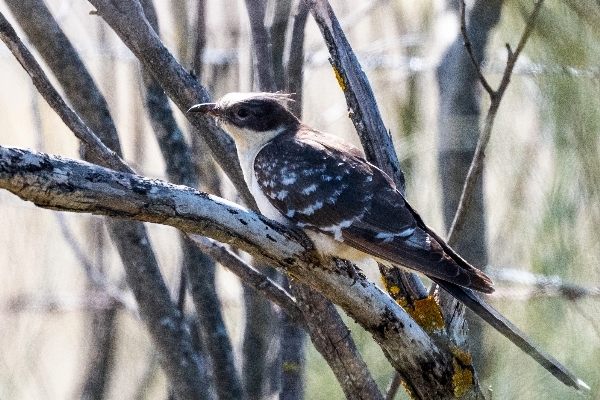 We make an early start from Madrid Airport and set off for Extremadura making several stops along the way. We may see Black & Red Kites, White Storks, Booted & Short-toed Eagles, Spotless Starling, Corn Buntings and Spanish Sparrow during a coffee stop and from the windows of the bus as we travel along.

At lunchtime we arrive near a town called Almaraz where we visit the ‘Orchid Garden’ which will be our first stop! This unique area has a limestone outcrop which supports many orchid species seldom seen elsewhere in Extremadura. Naked-man Orchid (Orchis italica), Conical (Orchis conica), Champagne (Orchis champagneuxii), Mirror Ophrys (Ophrys ciliata), Woodcock (Ophrys scolopax), Yellow (Ophrys lutea),) and Tongue Orchids (Serapias species) may be seen. We shall also look Sawfly (Ophrys tenthredinifera), Giant Orchid (Barlia robertiana) and Dull (Sombre) Orchid (Ophrys fusca) in other areas during our stay. 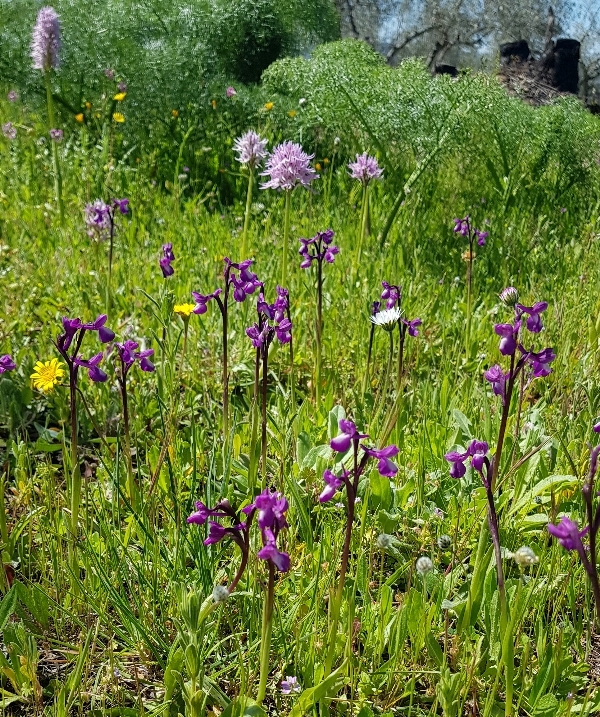 Champagne Orchids with Naked-man Orchid in the background

After lunch we visit Embalse de Arrowcampo ( a storage reservoir used for cooling the Nuclear Reactors at the nearby Power Station), the area has been designated a Parque Ornitológico and has boardwalks, tracks and raised hides where you can look over the vast reedbeds and open water. In early April you are likely to see Purple Swamphen, Purple Heron, Great, Little and Cattle Egrets, Night Heron, Squacco Heron, Whiksered and Gull-billed Terns. Ferruginous Duck have bred on the laguna for the last few years and other goodies included Penduline Tits, Black-winged Kites, Savi’s Warbler and many other species. 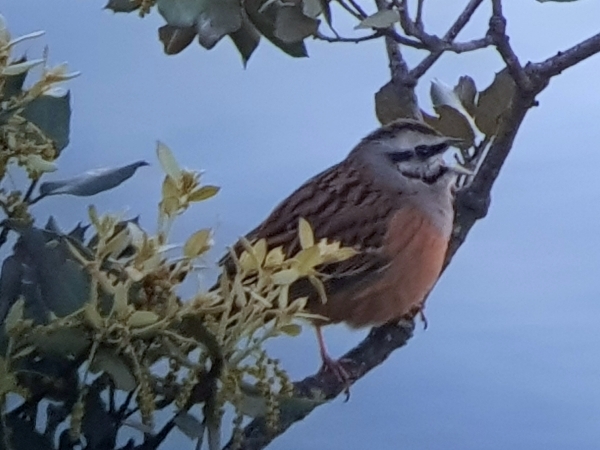 Further along our route we stop at the Heathland near the village of Jaraicejo where a good population of Dartford Warblers breed with Sardinian Warblers, along with the summer visitor Spectacled Warbler. It is a good place to see Iberian Grey Shrike, Woodchat Shrike, Iberian Magpie, Thekla Lark and the sky always has vultures, eagles and kites drifting over.

On the south side of the village we visit a medieval bridge standing alongside two modern bridges that span the river Almonte. There we may see Iberian Yellow Wagtail, White & Grey Wagtails, Spanish Sparrow, Hawfinch, European Bee-eater, Hoopoe and maybe one or two warblers.

If time allows we can stop in the dehesa as we head towards Monfragüe National Park where our hotel is found.

Just a stone’s throw from our hotel lies Monfragüe National Park, Spain’s flagship nature reserve and a wonderful place to visit. We shall spend all day discovering the miradors, tracks and out-of-the way areas to discover the fantastic wildlife of this exquisite area.

Expect to see all three Vultures species and up to four Eagles, Kites, Kestrels, Peregrines, Sparrowhawks and Harriers, you will enjoy a raptor fest!!  But its not all about raptors, the steep cliff faces are also home to Blue Rock Thrush, Rock Bunting, Black Redstarts, Crag Martins, House Martins and Red-rumped Swallows. Alpine Swifts breed beneath the bridges whilst Serin. Siskin, Black-eared Wheatear, Woodlark, Crested Lark, Iberian Magpie and many other species can be found in the dehesa and cistus scrub.

A late afternoon walk in a section of dehesa may turn up more woodland species such as Short-toed Treecreeper, Eurasian Nuthatch, Iberian Green, Great & Lesser Spotted Woodpeckers, Rock Sparrow, Common Cuckoo, Iberian Magpie and maybe some early arriving warblers. If weather conditions are right we should find Tongue Orchids in the woodland.

DAY 3 – THE PLAINS OF SANTA MARTA, CASÉRES AND BELEN

An early start is made today as we take our breakfast with us in a box. We set off in the dark hoping to arrive on the plains at sunrise. A quick stop in Trujillo will be made to look at a thriving Lesser Kestrel colony where up to 40 pairs are now breeding.

On the plains we shall spend the morning searching for both species of Bustard and both species of sandgrouse. The air will be alive with the sound of larks ascending, mainly Calandra Larks, but also Crested Larks, Skylarks and maybe Short-toed Larks.

Most of the morning will spent out on the plains, will we take lunch in Santa Marta village before moving on towards Caséres. An area where a nest-box has been attached to every telegraph pole is our next destination, we shall hope to see European Rollers (if they have returned from their wintering grounds in Africa), but also Stone Curlew, Red-legged Partridges, Harriers (both Montagu’s and Marsh and maybe a late Hen Harrier).

In the afternoon we shall drive a little to the north-east of Trujillo to visit the plains of Belén. This has similar habitat to the steppe around Santa Marta but on a smaller scale. We concentrate our search for Great Spotted Cuckoo in areas of tamarisk and broom scrub where the cuckoo likes to feed on furry caterpillars.

A little later start today gives us the opportunity to enjoy the lovely breakfast spread at the hotel. We then drive towards Caseres stopping several times along the way. We visit some ancient woodland to look for species we may have mist in the National Park such as Woodlark, Orphean Warbler, Subalpine Warbler, Lesser Spotted Woodpecker.

We also stop at another bridge over the Almonte River where we can look for Black Wheatear, Alpine Swift, Crag Martin, Blue Rock Thrush and one or two Orchids.

The Embalse at Talavan, had a large reedbed where we may find Reed & Sedge Warblers, Zitting Cisticola and Spanish Sparrow. The reservoir itself sometimes holds some species of duck, sandpipers, terns, gulls and the scrub around the water is an excellent place to look for Great Spotted Cuckoo. The area also has a good number of nest boxes attached to the poles and we can make a final search for European Rollers before we head back to the hotel for the last time.

DAY 5 – RETURN TO MADRID WITH A SECOND STOP AT ARROCAMPO

We shall have time to re-visited the Embalse at Arrocampo to try to add to our species list, just a few days in early April can make a lot of difference to what species have arrived, the weather conditions play a huge part in the birds we see.

You have to arrange your own flights but we can help you with your selection. You should aim to arrive in Madrid as early as you can on day 1 and book return flights from Madrid around late-afternoon or early evening on the day of departure. We can arrange overnight accommodation near Madrid Airport on the 31st March if you cannot find suitable flights on nthe Ist of April. Please contact us before booking anything!