The “Lake District” of Andalucia 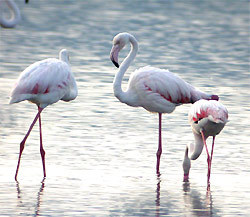 The largest inland lake in Andalucia is found just north east of Campillos, La Fuenta de Piedra, it plays host to Iberia’s largest colony of Greater Flamingos. It is a Ramsar site, ZEPA and a ‘Reserva Natural’ of some 1400 ha. The lake has no drainage outlet and with an impermeable bed its water has nowhere to go. During the summer months in hot, windy conditions, evaporation reaches catastrophic proportions, such that the lake completely dries up most years. Due to this the waters are extremely saline and support many salt tolerant plants and animals. Ancient dykes lie just below the surface of the shallow waters, evidence of Roman saltpans, these are particularly attractive to breeding Flamingos. An enormous population thrive there, some 20,000 pairs breed and are joined by Gull-billed Terns, Avocets, Black-winged Stilts andCollared Pratincole.

The brackish lagoons and freshwater inflows around the lake margins encourage a different flora and fauna.Red-crested Pochard, Pochard, White-headed Duck, Purple Swamphen, Kentish Plover and one or two pairs of Red-knobbed Coot may be found in the marshes and reed-fringed lagoons. 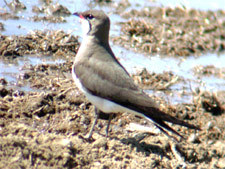 Four other seasonal lagoons, called the ‘lagunas de Campillos’, have protected status (reserve natural) and will be visited during this day tour. These lagoons attract smaller numbers of most of the above bird species but offer the opportunity to gain much closer views. With reed fringed margins we may catch up with Marsh Harrier, White Stork, Reed, Great Reed, Cetti’s, Olivaceous, Fan-tailed and Melodious Warblers. Little Bittern, Squacco and Purple Herons can also be found.

Teba and the Tajo de Torro.

Our return journey will take us passed the Tajo de Torro, a spectacular high sided gorge, near to the town of Teba. Making short stops along the road we can scan the rugged hillside of the Sierra de Teba and the gorge itself. Black Wheatear, Blue Rock Thrush, Rock Bunting, Rock Sparrow, Alpine Swifts, Vultures and Eagles will add to an impressive day list.

The Rio de la Venta flows out of the gorge and across a broad flat plain, its banks are reed fringed and tree lined giving further variety of habitat to explore.

A day out to the lakes and the gorge will produce a wonderful variety of bird species at most times of the year, mid-June to October being the least productive. Spring and early summer, March to early June, are the best times whilst winter birding November to March will also be very rewarding on the lagoons.

Other sites that may be visited during our day tours include: Embalse de Taraje, the Rio Guadalmansa, the Cancelada Hills, Los Reales and the Arroyo Vaquero.