A WALK FROM WEYMOUTH TO FERRYBRIDGE AND BACK

Celia drove over to our flat at 9am and she joined Dawn and I as we drove down to Weymouth to walk the Rodwell Trail, one of our favourite walks. We parked near the northern entrance to Radipole Lake RSPB Reserve and took the track through the reserve. We noted Mute Swan, Mallard, Tufted Duck, Common Pochard, Grey Heron Cormorant, Moorhen, Coot and a bunch of gulls which included Common & Mediterranean Gulls. 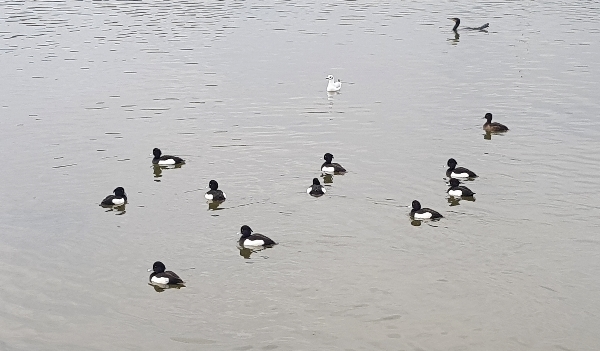 We arrived at the closed visitor’s centre in the Swannery car park in the centre of Weymouth and walked towards the harbour crossing the Westham Bridge to the start of the Rodwell Trail.

It was fairly quiet along the first part of the trail, not many people or birds were encountered, after the first mile we turned off the trail to make a short detour to the ruins of Sandsfoot Castle which sits on the northern shore of Portland Harbour and provides a good vantage point from which to scope the harbour for birds. 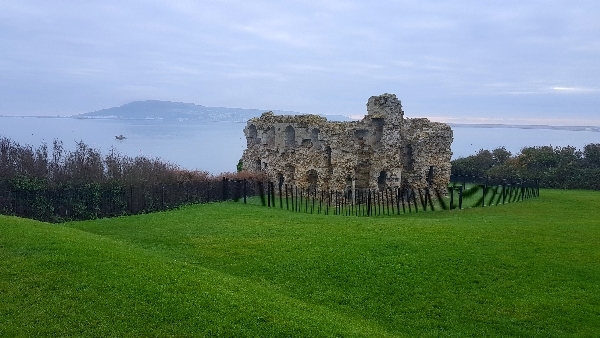 Very rarely do you find Portland Harbour so flat calm, it was like the proverbial Mill Pond, a glasslike surface. I quickly set up my scope for a scan. There were lots of birds out on the water but unfortunately most of them were about a mile away, in fact every bird I saw during this first scan was at least a mile off.

I picked out one, then two and then a third Great Northern Diver, but they were just tiny specks in the scope, using the zoom on my phone I got some record shots. 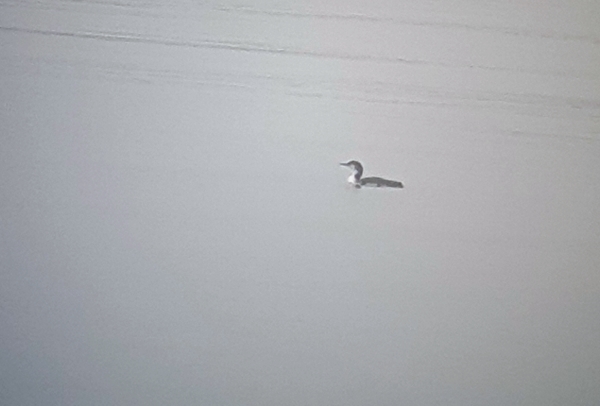 one of the Great Northern Divers in Portland Harbour this morning

I also found a group of 8 Black-necked Grebes, then another appeared a little further off and then I found a single Slavonian Grebe. Other birds seen from the Castle grounds included Great Crested Grebes (10), Red-breasted Merganser (20+) and a stack of Herring and Great Black-backed Gulls.

We all sat and enjoyed lovely hot chocolate drinks at the café before resuming our walk along the Rodwell Trail. It wasn’t long before I stopped again, this time I was standing high above the Weymouth Sailing Club. Through the scope I quickly picked up a Razorbill which was fairly close in, I also found two Common Shelducks, two Brent Geese and I had better views of the Black-necked Grebes (but they were still far out). 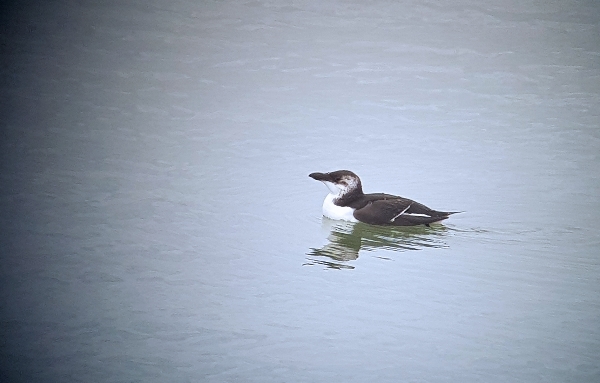 The trail terminates as you reach the main A354 at the Old Ferrybridge Arms (incidentally this pub has been closed for over 10 years and its demolition has just begun), we crossed the road and viewed the waters of the Fleet as we walked to the visitors centre at Ferrybridge Nature Reserve. As we crossed the actual Ferry Bridge we could see a huge number of gulls on the mudflats with a few Brent Geese dotted about. 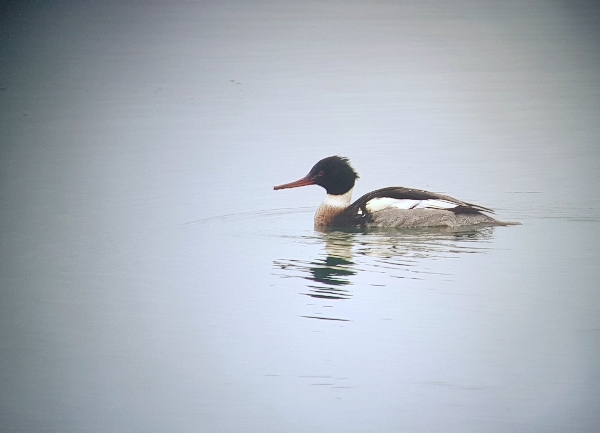 The gulls were very skittish and so were a mixed flock of Dunlin and Greater Ringed Plover, many flew off down the fleet never to return. I looked to see what the cause of the commotion was but never found a bird prey lingering anywhere. I picked out four Bar-tailed Godwits, a single Oystercatcher and a couple of Ruddy Turnstones. Most of the gulls were the Mediterranean species, I noted a few hundred were present but someone counted 1200 here yesterday! 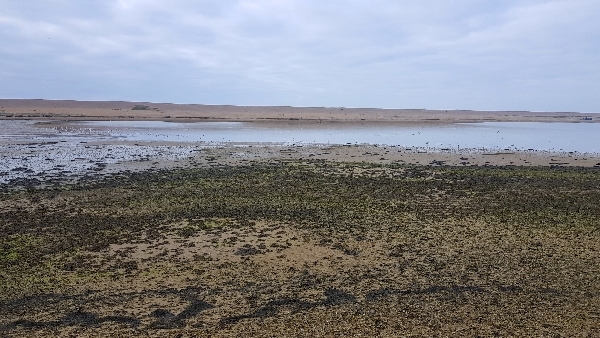 We sat outside the café at the Ferrybridge Centre and ate our picnic lunch, I noted Pied Wagtail, Common Kestrel, Raven, Starlings, Goldfinches and Red-breasted Merganser (in flight) whilst we ate our lunch. 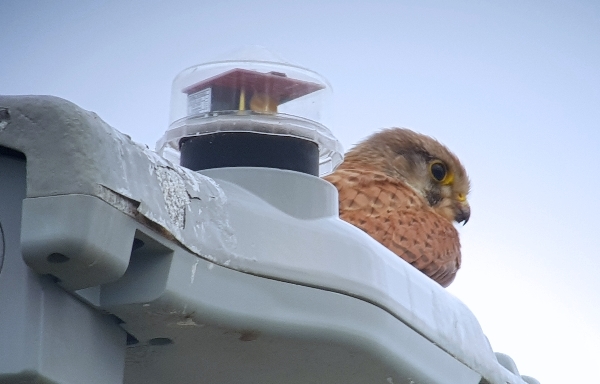 Common Kestrel seen whilst we ate our picnic lunch

During the journey back I scanned the harbour from various viewpoints and found that some of the birds were a little closer with better light conditions. I picked out two Slavonian Grebes with 8 Black-necked Grebes, another Great Northern Diver and over 50 Red-breasted Mergansers. The Razorbill was still close in and I found two Little Egrets, more Oystercatchers and more Med Gulls. 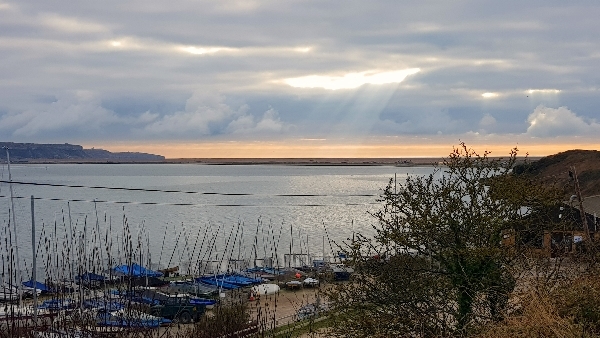 We arrived back in Weymouth centre and as we approached Radipole Lake Reserve from the Westham Bridge I saw Little Grebe (my fourth grebe species of the day) and dozens of Tufted Ducks, I also noticed five Grey Herons descending onto the reedbeds at Radipole Lake just ahead of us. They caused pandemonium amongst the roosting gulls and unfortunately many of them flew off towards Weymouth Bay. 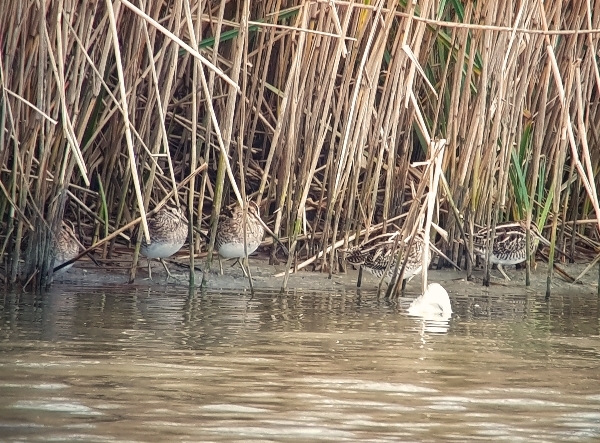 That was a pity because I was hoping to spend some time sifting through the gulls hoping for a sighting of the Iceland Gull which has taken up winter residence here in Weymouth.  I know this bird prefers Lodmoor but you never know. Anyway, I did stop at the wooden bridge to look over the main lagoon at Radipole, I saw the usual gull species and I picked out seven Common Snipe along the edge of the pool at the base of the reeds.

The reedbeds at Radipole were unusually quiet, I never heard a Water Rail, a Cetti’s Warbler or the pinging of Bearded Tits, not even a Reed Bunting flew down onto the track just Robins and Dunnock was all I saw. 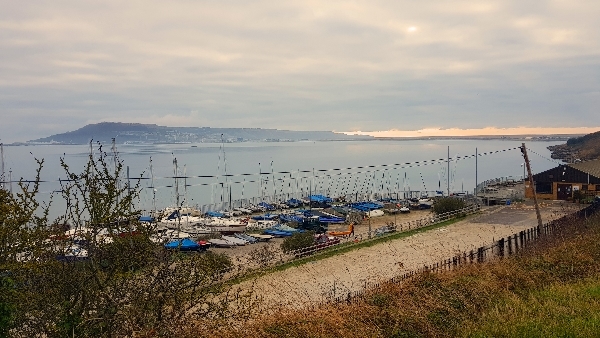 I got back to the car around 3pm (the girls were far ahead of me), we had walked 16,240 steps, enough for one day!! It was just getting dark as we arrived home, I heard news from my local WhatsApp group that the Caspian Gull had returned for its fourth day at Sutton Bingham Reservoir.