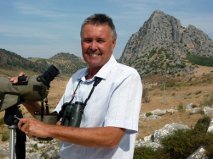 Bob Buckler is the proprietor of Wingspan Bird Tours, which was founded in 1995 after Bob had been leading week-end tours for some 5 years for the Portland Heights Hotel in Dorset, UK. Wingspan began with weekend breaks based in Dorset, UK. The short breaks business soon expanded to week-long UK tours taking in Cornwall and the Isles of Scilly, Norfolk, South Wales, Scotland and also Northern France.

The birding business was put on the back burner for 3 years whilst Bob attended a full time degree course during 1996-1999. In 1999 Bob ventured to the Greek Island of Lesvos and since 2000 has led tours there. Spain was an old favourite and after revisiting the Coto Donana, Extremadura and the Pyrenees during 2000/1 these destinations were added to WINGSPAN'S repertoire. Portugal and Morocco were obvious progressions from Spain and these were added in 2005/6.

During this time period the lure to Spain was overpowering and because the birding is fabulous, the weather superb and the scenery fascinating Bob and his wife Dawn bought a home in the mountains of Andalucia in southern Spain. They spent 3 years commuting and renovating their new holiday home before opening the house for summer lets in March 2009. Wingspan Bird Tours is now based there for a few months of the year. Plans are afoot to include a few more destinations to the growing list on our programme, we have added The Gambia, Costa Rica, Sri Lanka, Colombia, Bulgaria, Australia, Guyana, Northern Greece, whilst Oman, Isle of Scilly and Poland are in the pipeline.

Wingspan has a small but loyal following with a database of less than 1000 clients, however it is very rare that a tour has to be cancelled due to lack of support. With Wingspan you are assured of a competitively priced holiday, you will stay in good quality accommodation, you will travel in comfortable buses and you will visit all the relevant birding hot spots. For those reasons people return to us time and time again. 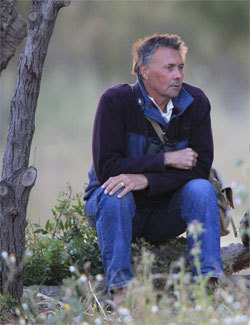 Bob is now a very experienced tour guide, with over 35 years of field craft under his belt and he has led over 400 tours during the last 25 years. He has travelled extensively in the UK. Spain, Portugal, France and Greece and made birding trips to parts of the USA, Canada, Israel, Morocco, The Gambia, Costa Rica, Guyana, Oman, Australia, Colombia, Ethiopia, Northern Greece, Egypt and the Balearic Islands. Bob offers a casual approach to bird-watching and guides with an easy going, friendly nature. You are not lectured to or confused with too much “expert” knowledge, the trips are good humoured and suitable for beginners and accomplished bird-watchers alike.

Bob currently leads tours to several destinations in Spain and also to Morocco, Portugal, The Gambia and Lesvos, Northern Greece, Bulgaria, Sri Lanka, Colombia. He operates his Wingspan business from two locations. During the winter months Bob and his wife Dawn are based in Somerset, UK and during summer they are based in Gaucin, Spain, from where an extensive range of bird-watching holidays are available.