DAY 1 OF THE AUTUMN DORSET TOUR

WEATHER:  a lovely bright start, with no wind. Cloudy later with a light breeze. Temp 14C

What a great start we had for our autumn break in Dorset, all the participants arrived last night so were ready for an early start. In the meantime, Nigel Bleaken drove over from Wales arriving at my home at 7:30am. to complete the group.

After collecting the bus and the other four participants from a local pub/hotel we set off for Wareham, passing through Dorchester where we stopped to pick up lunch supplies.

A few miles east of Dorchester is an area of disused gravel pits, it has now been landscaped with lakes and rolling hills. In the last few years it has become quite an attractive site for ducks, geese and a few waders. The surrounding scrub habitat has developed nicely too and is an excellent place to find Woodlarks.

We parked the bus and walked down towards the large open lakes where we quickly started listing a few species of ducks and geese. We saw Tufted Duck, Gadwall, Mallard, Wigeon, Teal, Coot, Great Crested Grebe, Mute Swan, Canada Geese and a few Black-headed  Gulls.

We then heard a Woodlark singing, in fact two birds burst into song, but it took us quite a while to actually locate the birds, in fact they came to us. Two WOODLARKS chased one another over the scrub and one of them perched up nicely for us, we all had excellent scope views, wow, Woodlark in the bag!! 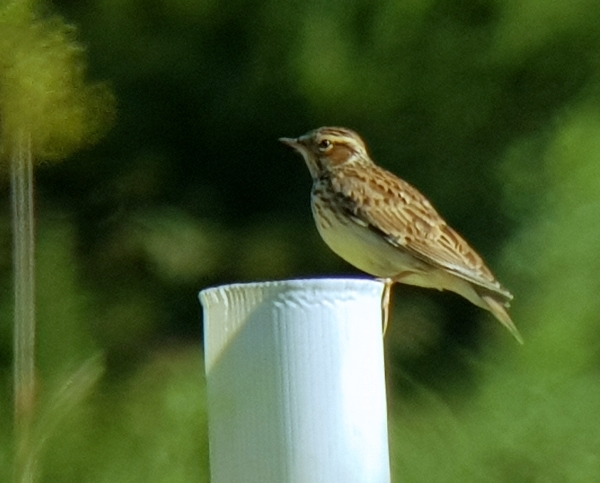 our bird of the day Woodlark, seen at Silverlake

Scanning the area we found a single Wheatear, a couple of Stonechats, a few Meadow Pipits and at least 5 Jays. A Peregrine Falcon swooped down over the pool and tried to take a Sand Martin but it missed and landed on the far bank. Scoping the far lake we saw more geese including Greylags and just before we left a Buzzard flew over.

Before visiting Wareham Forest we made a brief stop at Crossways Water Cress Beds, where a 10 minute scan produced both Pied and Grey Wagtail and more Meadow Pipits, Nigel saw a Bullfinch fly across the road as we pulled away from there.

We spent two hours walking the pine glades and open heathland found at Wareham Forest, we parked at Sherford Bridge. A few birds were seen along the track as we walked through mixed woodland, Long-tailed Tit, Goldfinch, Chaffinch, Jackdaw, Jay, Magpie but not many of the ‘star’ species. 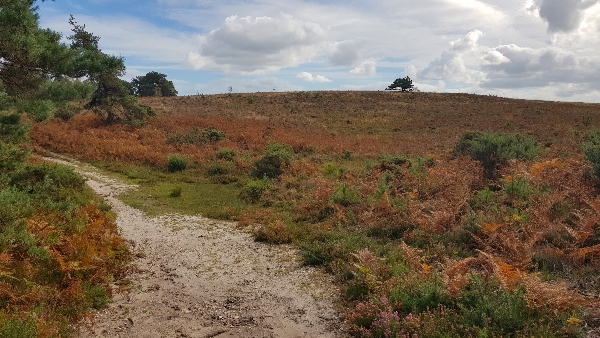 the autumnal colours of the Dorset Heath

On the heath we found more Stonechats and not a lot else, so we sat and ate our picnic in a sunny spot in a woodland glade. Before we left the glade a mixed flock past through the trees, Blue, Great and Coal Tits were joined by a Chiffchaff and two Goldcrest, the ‘crests showed very well. 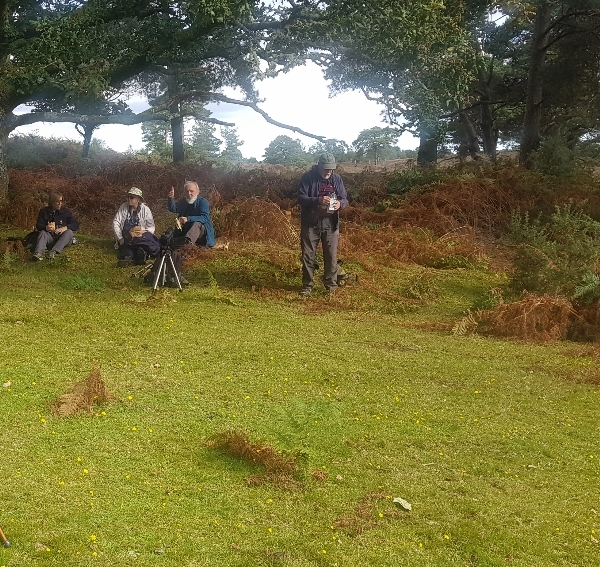 four of the group having a picnic

Back on the heath it took us all of five minutes to find a DARTFORD WARBLER, we saw at least four individuals and Mike Ambler managed to shoot off a few pictures of it.

Back at the car park we walked into pine forest on the easterly track, after a short while we found another ‘tit’ flock with at least 20 Long-tailed Tits and to our great delight a Treecreeper was with them. 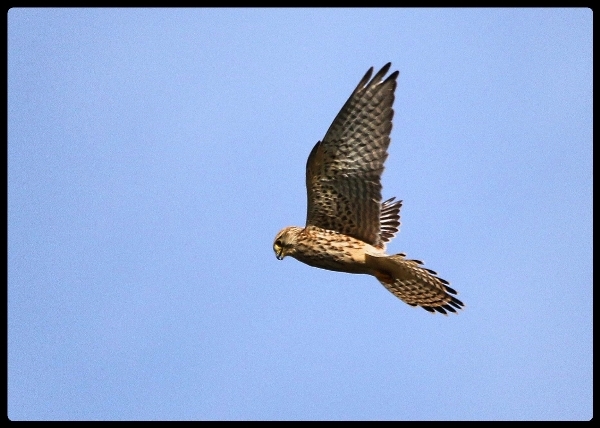 Another stop about a mile down the road produced a flurry of raptor sightings, we saw a Common Buzzard being chased by two Ravens, then we saw a Sparrowhawk flying above them, quickly followed by a Kestrel sighting which flew over the top of us.

We made a short search for a Yellowhammer without luck but we did find another Dartford Warbler, this one was singing in the afternoon sunshine. Once again Mike was the only one to get pictures of it. We also saw more Stonechats, Goldfinches and Meadow Pipits.

Our last stop was made at the RSPB Reserve at Lytchett Fields near Poole Harbour. This marshland floods during high tide and provides a haven for many resting waders, ducks and gulls. It was high tide when we got there and quite a few birds were present. Black-tailed Godwits were dotted all over the marsh and gangs of Dunlin fed on any exposed mud they could find. 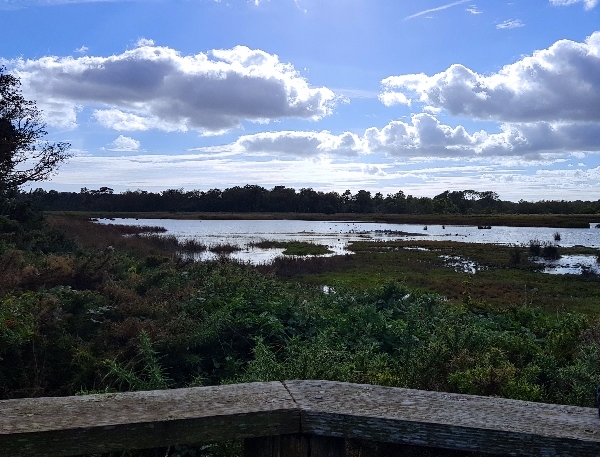 the flooded marsh at Lytchett Fields 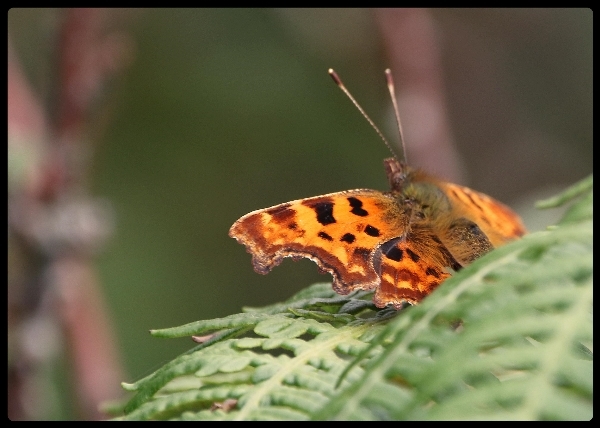 Small groups of both Redshank and Greenshank were present and we also saw a single Green Sandpiper, a few Common Snipe and lots of gulls. We saw our first Common Gull of the Autumn with dozens of Black-headed and the odd Great BB with a single Lesser BB Gull. 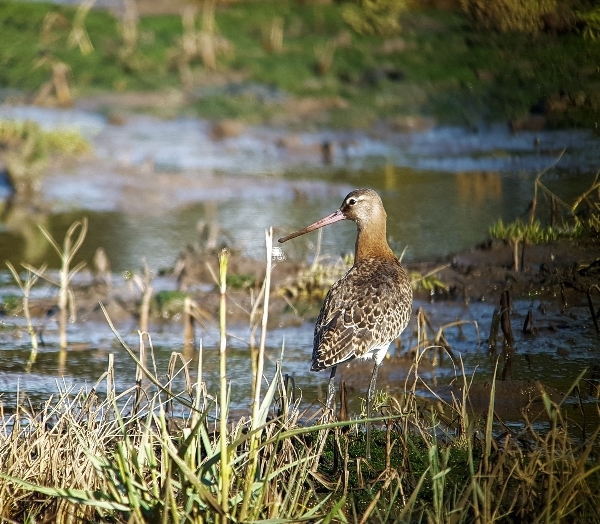 Passerines were few and far between but we did see a Northern Wheatear and lots of Swallows, a few House Martins and a Common Buzzard. 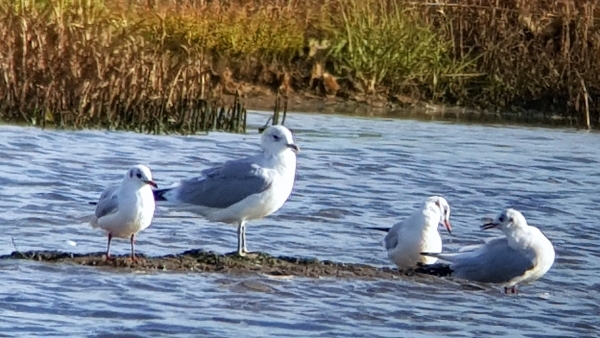 Common Gull, my first of the autumn

We got to our hotel in Wareham a round 5pm and thus ended day1 of autumn tour of Dorset.