Today was our last day because we had brought our departure forward by 24hrs due to pending bad weather, a wise decision by the looks of things to come. After breakfast we headed out to Peninis Head which was just a short walk from our guest house. We saw Goldfinches and good numbers of Linnets along the way as well as Meadow Pipits and usual common garden species. 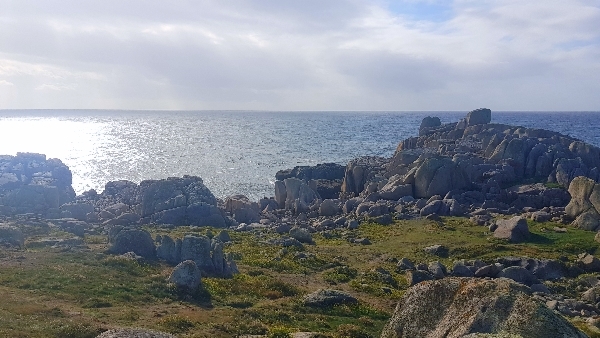 Peninis Headland in the morning light

At the Headland we found a single Wheatear and nothing else, a few Gannet were flying by as were Herring Gulls and Gt BB Gulls, a few Shags fed in the sea and a couple of Grey Seals ‘bobbed about in the sheltered areas. The views of the rocky scenery was worth the walk it was beautiful out there. On the north side of the Headland we followed the track into Old Town Bay and the beach area. We saw plenty of Oystercatchers, Ruddy Turnstones, a Grey Heron and more Seals. 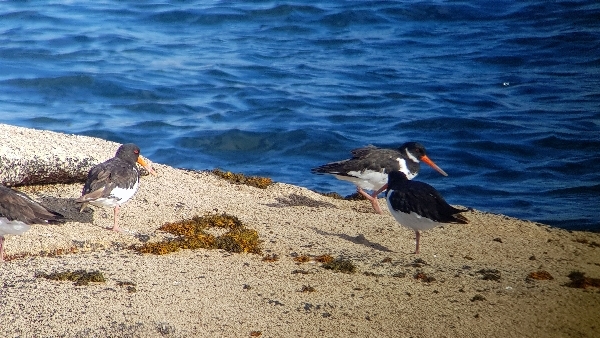 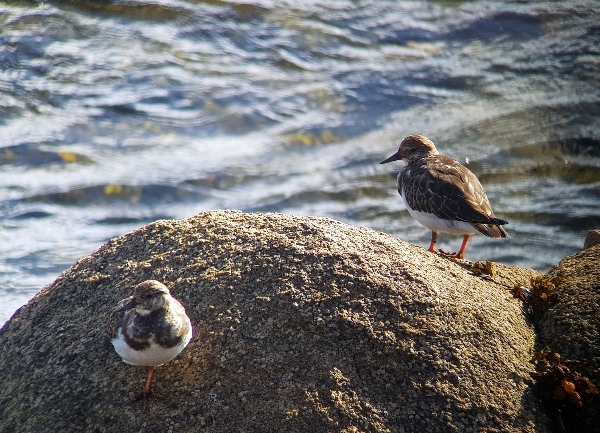 Ruddy Turnstones, not so ruddy in teir winter garb

As we approached Old Town Beach we nipped into Old Town Churchyard where Harold Wilson (UK  Labour Prime Minister 1964 -70 and 1974-76)  is buried, the group wanted to see the grave. The Churchyard can be very good for migrant birds but today it was devoid of birds. 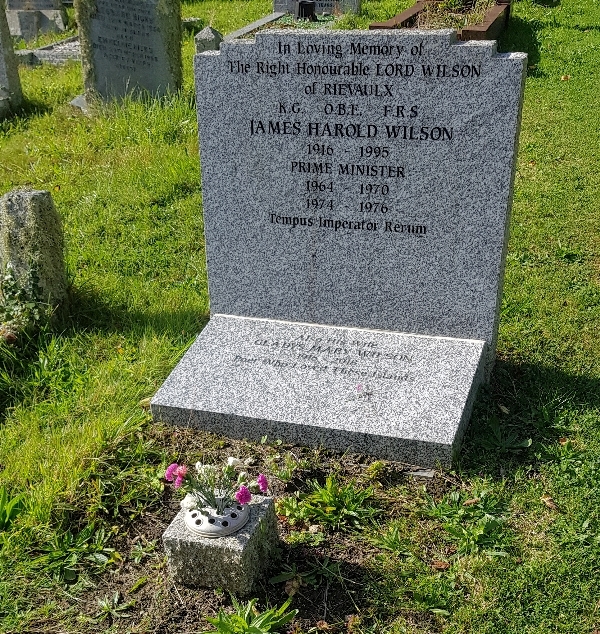 The group then dragged me into a café where we enjoyed a lovely cuppa and a piece of chocolate cake, from where we were sitting the view over Old Town Bay was stunning.

Our walk though Lower Moors produced very little too, we sat in a bird hide and ad great close up views of a Greenshank what an elegant looking wader that one is. Also present was a few Moorhens and some Mallards. To think that in a few days time there will be Jack Snipe, Common Snipe and few other species of duck present there. 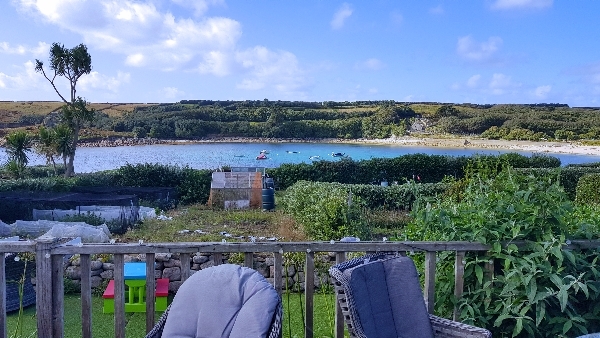 looking into OLd Town Bay from the cafe

We crossed the road at the end of the trail through Lowers Moors and entered Rosehill Gardens where found a few Common Darters, Peacock and Speckled Wood Butterflies, but no birds. 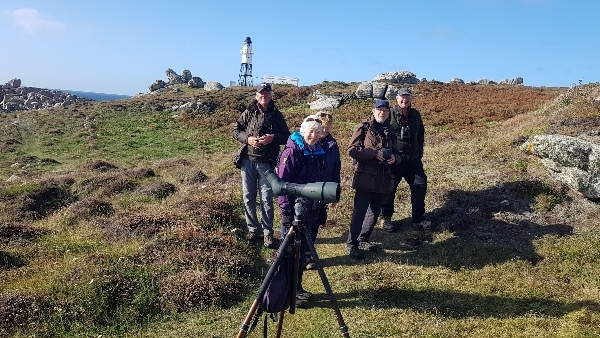 It was quite windy at Porth Loo Beach but we managed to find a few species of waders. A roost of Black-headed Gulls were joined by some Sanderlings and Ruddy Turnstones and out on Heron Island we saw Grey Heron, Oystercatchers, Eurasian Curlew and our first Bar-tailed Godwits of the trip. A couple of White Wagtails fed on the shore  and a number of Rock Pipits flitted about in the piles of dead sea-weed. 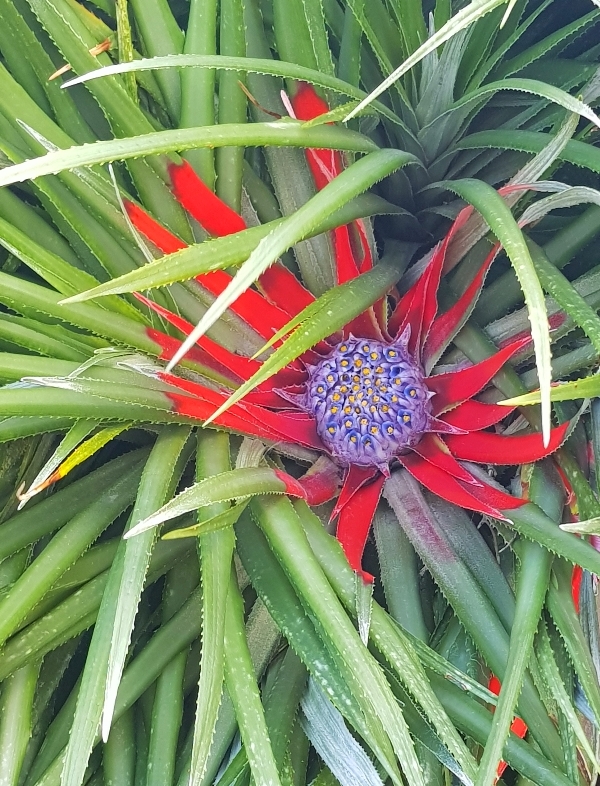 I think this is a species of Bromiliad. perhaps,  Fascicularia bicolor

We got back to the guest house in time for last minute packing before we walked down to the quay to catch the afternoon ferry service back to the mainland at Penzance. The ship set sail on time in lovely weather and a relative calm sea. It was a lovely, calm crossing, the wind had dropped and the clouds cleared. The trip was wonderful we saw many birds of a few species. Stand-out sightings were of Storm Petrel, Sooty Shearwater, Great Skua, Manx Shearwater, Razorbill and Guillemot. Gannets were remarkable because of their sheer numbers, we found a couple of large feeding groups where they were performing their kamikaze dives into the water. 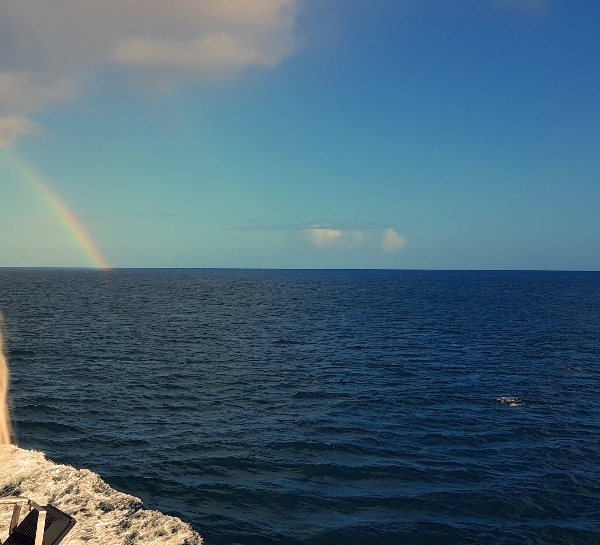 we had a light rain shower as we left the harbour at St Mary's, hence the rainbow 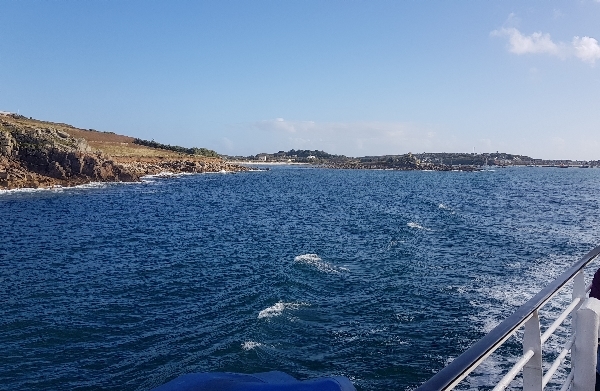 It was almost dark when we arrived at Penzance dock, we said our goodbyes, the trip was over, we all had to find our way to alternative accommodation because of the date change of our return trip. I was collected by my friend David, the son of Brian and Mary, they put me up for the night and looked after me very well. Before long I was sitting by the fire with a home-made pastie and a can of beer, watching the footie on the tellie, aaaaaaaahhh………bliss!! 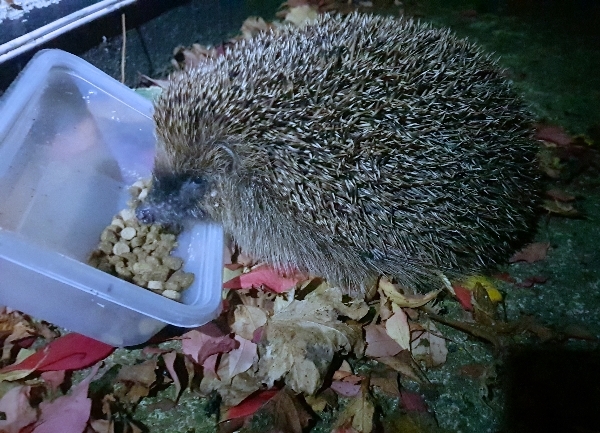 Mary feeds the local Hedgehogs, there are usually two or three in her garden every night.