DAY OUT IN DORSET

WEATHER; dull and overcast to start, brighter later, then rain at 4pm. Light southerly wind. Banner picture shows some of the 12 Goosanders found in Portland Harbour.

Last night my birding pal Nigel Bleaken drove down from Chepstow to stay with us in preparation for today's Dorset birding extravaganza!

We were up and out by 7am this morning, heading down to Portland via Dorchester and Weymouth. It was light by the time we got there at 8am but it was very dull.

After parking near Portland Bill we walked down to the lighthouse noting Raven, Herring Gull, Jackdaw, Pied Wagtail and Carrion Crow along the way. At the cliffs near the lighthouse we saw Eurasian Oystercatcher, Ruddy Turnstone and several Northern Gannets off-shore. We searched the rocks for Purple Sandpipers without success. 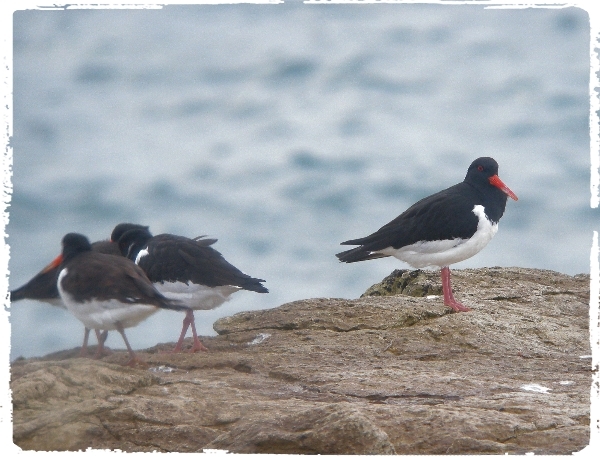 A brief sea-watch produced a great many sightings, dozens of Razorbills and Guillemots dashed back and forth and often settled on the water. We also saw many Great Cormorants, European Shags, Kittewakes a few Fulmars and Nigel pointed out a single Red-throated Diver. 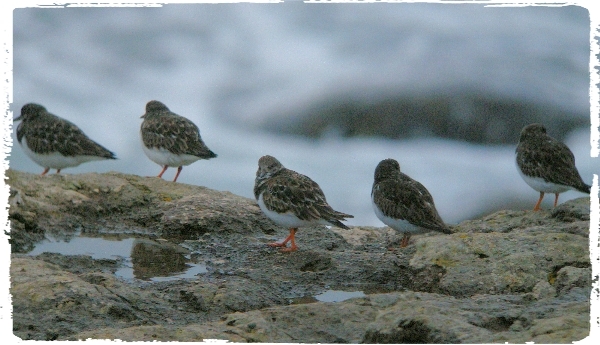 We then walked around the old quarries near the 'Bill' where we found a single Black Redstart, European Robin, a small flock of Goldfinches and a few Common Starlings. Further searching along the cliffs for Sandpipers resulted in disappointment but we did see another target species, Rock Pipit.

We left the area making a short stop at Reap Lane, Southhill,  where we saw a single Greylag Goose, Lesser Black-backed Gull, Black-headed Gull, House Sparrow and a small flock of Linnets.

We next visit Portland Harbour and over the next two hours we scanned the Harbour from Pennsylvania Castle, Ferrybridge and Weymouth Sailing Club. In the harbour we saw scores of Red-brested Mergansers, 3 Eider Ducks, 4 Black-necked Grebes, Common Kingfisher and our best sighting was of 12 Goosanders. 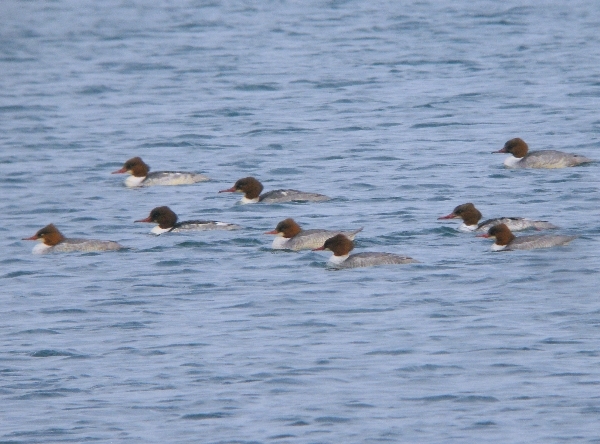 Ferrybridge Sand-flats produced very nice coffee but not many species as the tide was at its highest. We saw about 80 Brent Geese, lots of Mediterranean Gulls and not much else. 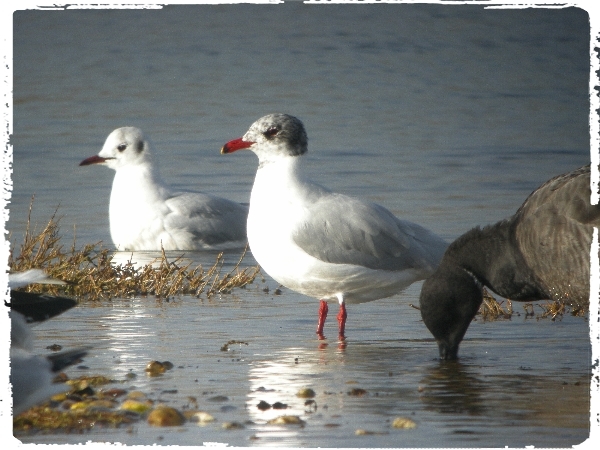 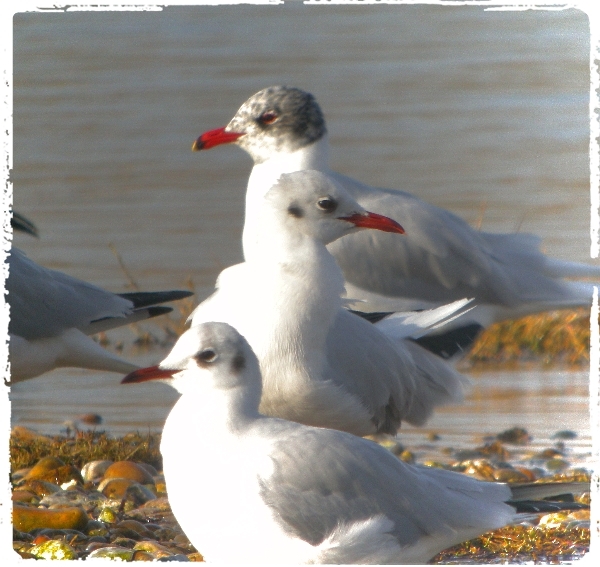 Our walk around Radipole Lake was nice, the light was good but it was a little breezy. We added Eurasian Teal, Shoveler, Common Pochard, Tufted Duck, Gadwall and a Hooded Merganser (escapeé). From the hide on the 'Buddleia Loop' we watched two Marsh Harriers and a distant Common Buzzard and as we walked back to the car park we heard Cetti's Warbler. 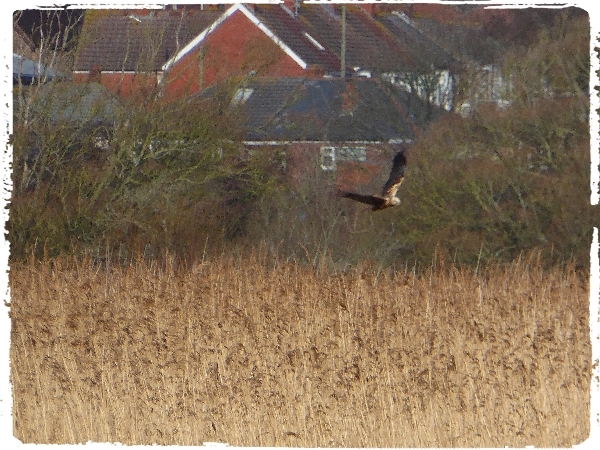 Our route to Abbotsbury Swannery took us through Nottington where at least four Cattle Egrets failed to show. However, once we arrived at the Swannery we scoped two Cattle Egrets in the nearest field. Other species seen were hundreds of Mute Swans, several hundred Lapwings and countless Tufted Ducks, Pochard, Mallard, Teal, Gadwall and Shoveler. We added Wigeon to our list and nearby we saw Canada Goose, Redwing, Mistle Thrush, Little Egret, Grey Heron and Common Pheasant but we couldn't find the recent sightings of Scaup and Long-tailed Duck. 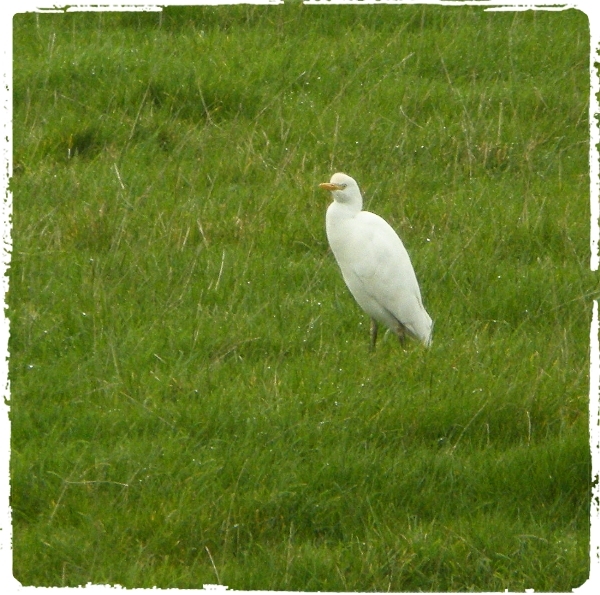 Cattle Egret is now on my year list at last!

Next we spent nearly an hour walking the streets of the suburbs of Dorchester where a Rose-coloured Starling kept well hidden from us the whole time we were there. We had better luck at Maiden Castle with the Golden Plover flock.

Lastly we headed back into Weymouth to visit Lodmoor reserve hoping to see Scaup, we didn't see any but we did enjoy watching a great number of birds including Lapwings, Common Snipe, Golden Plover and the seven common duck species. 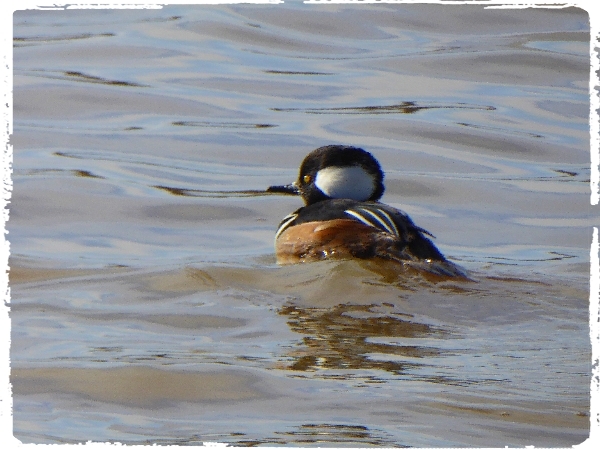 the Hooded Merganser at Radipole Lake

At 4pm the light faded, it started to rain so we left for home, arriving back in Stoford some 45 minutes later, it rained all the way back. After a nice cuppa Nigel set off for home, we counted our bird list which totaled 75 species, it could have been a lot higher with a little more luck and if Nigel had stayed awake all day!!