The very hot weather continued, we recorded 49C in the car this afternoon!! So our birding was restricted to early morning with an early finish........nevertheless we saw over 50 species............

I collected Katie and Oliver and their twin children Alfie and Sasha at 7am from their apt in the village. It was just getting light as we drove out of the village on the Algeciras road heading towards the coast. Our first sighting was of a Short-toed Eagle that was roosting on top of a pylon, we then saw a Common Buzzard doing the same in a road-side  tree. We turned off the main road at San Pablo and drove the six kilometers to the Marchenilla Track, along the way we stopped to admire two Little Owls perched road-side and showing well. 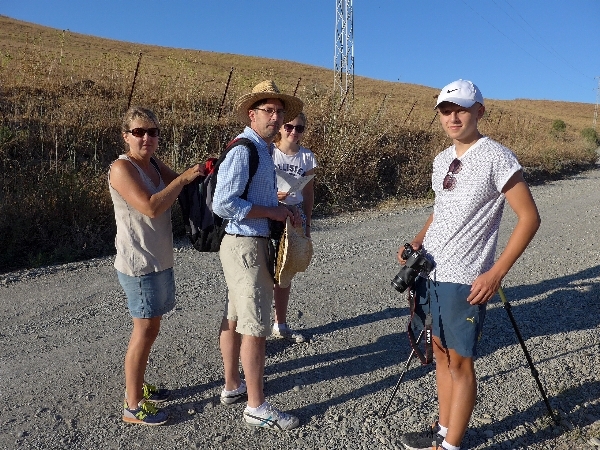 The Close Family, pictured on the Marchenilla Track

At the track we remarked on the high number of House Sparrows, they were joined by Greenfinches, Serins and Goldfinches, we also saw several Collared Doves, Spotless Starlings, Barn Swallows and a few Common Swifts. Another Little Owl sat just below a tin roof in a makeshift animal shelter and both Sardinian and Melodious Warblers dashed about in the scrub on either side of the track.

Plenty of Woodchat Shrikes kept us entertained as they perched on fence-lines and electricity cables, we saw both adults and juveniles showing off their diverse plumages. As we progressed along the track the landscape changed, open grass fields covered the rolling hills that streched ahead of us and a line of electricity pylons spanned the length of the track as it climbed the hills. On the pylons and interconnecting wires we found Lesser Kestrel, Stonechats, Greenfinches, more shrikes and a few Corn Buntings. On the track itself a number of Crested Larks were being chased around by a juvenile Tawny Pipit. At that point we turned around and set off back to the car, a small party of beautiful Bee-eaters grabbed our full attention for a while before we made the final walk back to the car. 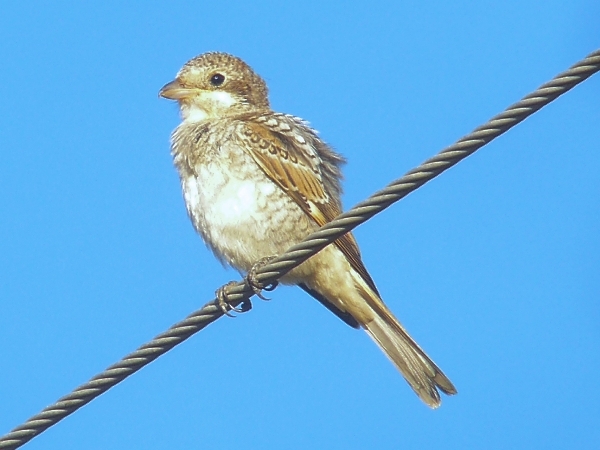 WOODCHAT SHRIKE - a juvenile, one of many seen today.

Before driving off we made a short stop on a bridge that overlooked the Rio Guadiaro and although we saw a lot of birds flitting around we only listed Grey Heron, Reed Warbler, Blue Tit, we heard several calls of the Golden Oriole before 3 of them dashed through the canopy and I think that it was just me that spotted a Cetti's Warbler.

Next we drove the whole length of the track across to the tiny 'hamlet' called Marchenilla, we stopped several times along the way to watch a number of species. A juvenile Montagu's Harrier, the first returning migrant of the autumn season that I have seen this year, put on a great aerial display as it dodged a flock of mobbing Lesser Kestrels. Then we watched a huge flock of over 50 Bee-eaters as they fed from the power lines and distant sightings were made of Griffon Vulture, White Stork and Short-toed Eagle. We also stopped to look at yet another pair of Little Owls as they perched on a pile of rocks and an Iberian (Southern) Grey Shrike showed well a little further along the track. 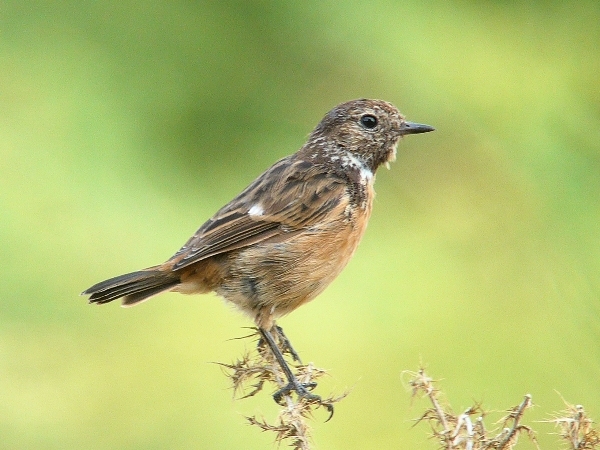 At Marchenilla we crossed over the main road to another track that took us to the Hozgargante River where we took another walk. It was now getting very warm so we kept under the shade of large eucalyptus trees as much as we could. A small pool attracted many birds to drink and bathe, we had good views of a Common Nightingale there as well as finches and an Iberian Chiffchaff.

Our walk failed to produce much, we noted quite a few Chaffinches, a single Common Whitethroat, a Booted Eagle and a 'Kettle' of soaring Griffon Vultures. The return journey produced sightings of Jay, Wood Pigeon and despite hearing severalmTurtlecDovescwe never saw one!

We ate our picnic lunch by the small pool where Melodious Warbler showed well, Spotted Flycatchers whizzedcabout and a surprising sighting of a Spanish Sparrow was a bonus. 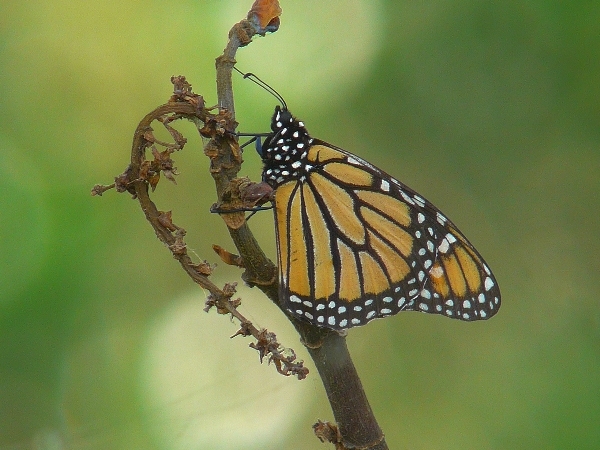 Our last venue of the day was the Castle situated on the pinnacle at the 'old' village called Castellar, but before we arrived there we made two stops to look at a couple of special butterflies. A colony of the Monarch Butterfly can be found near a small bridge over the Rio Guadarranque, we saw them easily and Alfie got a cluple of good pictures. Not far from there we quickly found a Two-tailed Pasha which was holding territory around its host plant the Stawberry Tree. 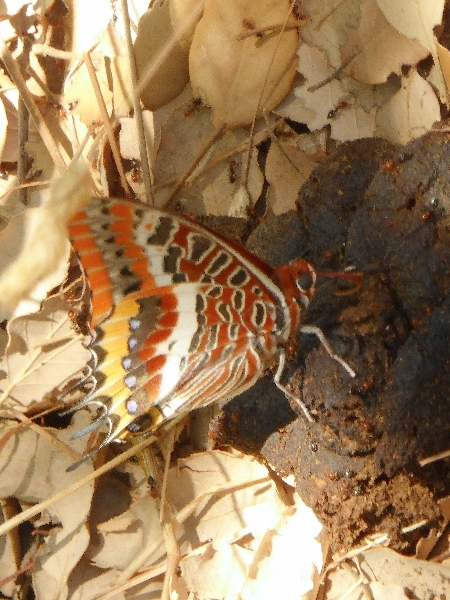 TWO-TAILED PASHA - on a pile of 'poo'

At the Castle we recorded the highest car temperature of the day, 49C. so we made our visit short and sweet. Crag Martins showed very well we even saw a chick inside one of their nests, but for me, the best sighting by far was of WHITE-RUMPED SWIFTS. Two of these special birds drifted by, it was really amazing especially as I have visited this site many, many times and this was my forst sighting of them, smashing!

We concluded the tour after a walk around the old village which is ensconced within the castle walls, fascinating, narrow cobbled streets form a maze where many houses are, in fact, art and craft shops.

We arrived back in Gaucin around 3pm, hot and tired but well pleased with our birding accomplishments of the day.  Bird of the day, no competition:  WHITE-RUMPED SWIFT