We had a full-on birding day today, we visited a lot of places, drove a long way, but it was all worth it as we saw some super birds.

I collected Pete from his apartment down on the coast at 8am just as it was getting light. We drove along the cost some 30kms to Palmones, where in recent days two Lesser Crested Terns had been sighted including prolonged views yesterday by my companion Peter.

What luck we had, the tide was low and the sand spit where the gulls and terns usually roost was deserted, but just as we arrived a Tern flew over us calling loudly. It was, of course, one of the LESSER CRESTED TERNS, fantastic, the bird flew up river over the salt marsh but returned a few minutes later and flew off into Algerciras Bay.

Well, after that stroke of luck we jumped back into the car and set off for Laguna Medina, which was a drive of about 40 minutes. It was a fantastic morning, no wind, nice temperatures and the light was superb. We walked down from the car park to the raised boardwalks noting, Common Stonechat, Zitting Cisticola, Cetti's Warbler (heard) and Greater Flamingo also heard but no seen, yet. 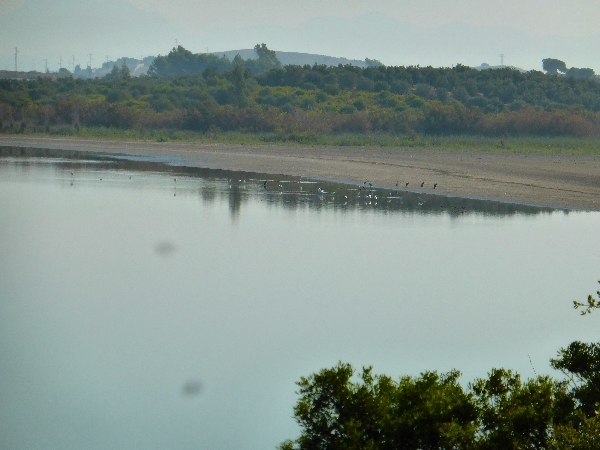 A view from the only hide at Laguna Medina

From the boardwalk we could see that the water level was very low with a large margin of mud around the edges of the laguna, we saw Eurasian Spoonbill, Greater Flamingo, Eurasian Teal, Pied Avocet, Black-winged Stilt and a few smaller waders. We 'scoped the waders and discovered Little Stint, Common Ringed Plover and to our delight a TEMMINCK'S STINT. ​This was most probably the same bird that I saw here 12 days ago. 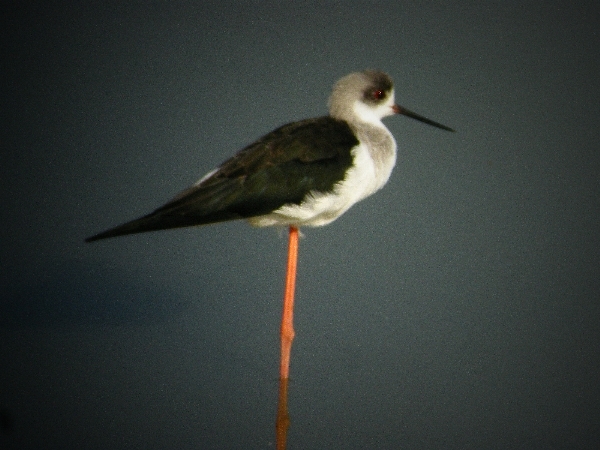 After that second bit of excitement we walked to the hide where a nice selection of species were seen. After scanning the distant shoreline Pete looked down below the raised hide and found a second TEMMINCK'S STINT! ​It was definitely a second bird as the markings were different on the two birds. We also saw Common Sandpiper, Dunlin and on the return journey we saw Curlew Sandpipers too. 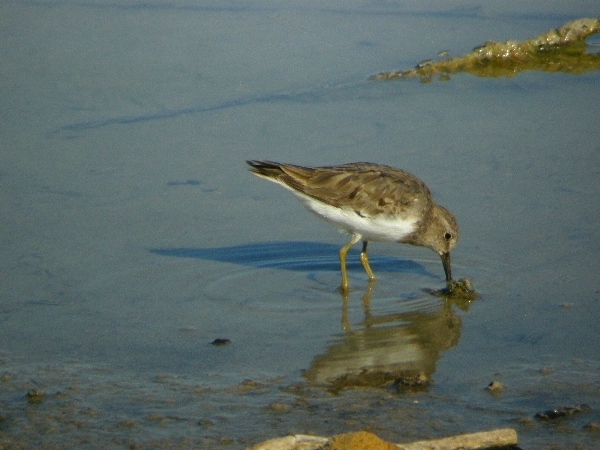 two pictures of one of the Temminck's Stints at Laguna Medina 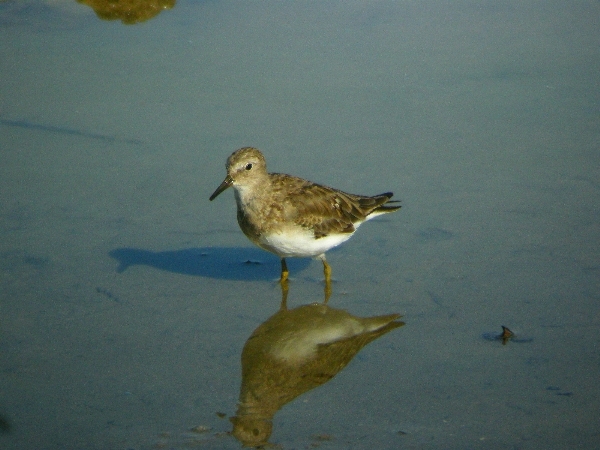 Driving on to Bonanza we spent an hour or so scanning the small 'ponds' looking for ducks, bitterns, swamphens and anything else of interest, last week I saw another Temminck's Stint at the 'ponds' but we couldn't see one now, perhaps it had flown off to Laguna Medina, who knows? 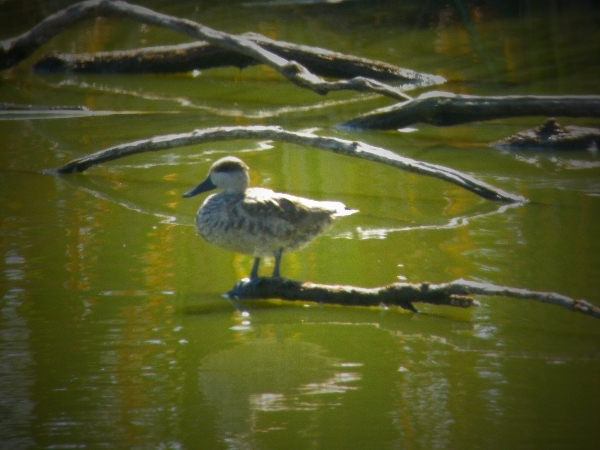 ​In another pool we found a RED-KNOBBED COOT, a smashing bird and another great sighting for our day list.

At the salt pans we found that the number of birds present had increased but the number of species remained low for this time of the year. Our highlights included: Red Kite, Osprey, Caspian Tern, a large flock of 50+ Whimbrel, good numbers of Slender-billed Gulls, Greater Flamingos, Black-tailed Godwits, Pied Avocets and the first few Common Shelduck of rhe autumn for me. 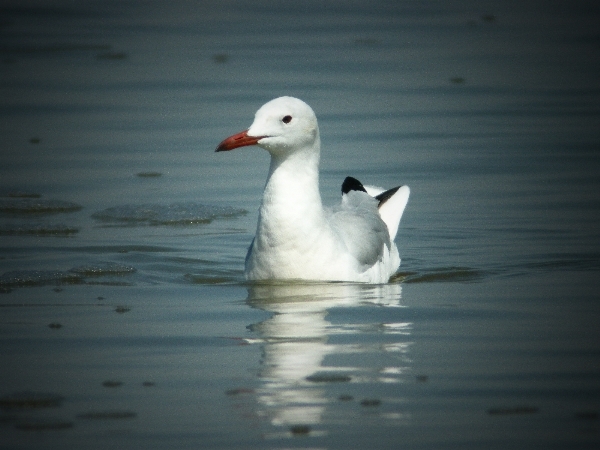 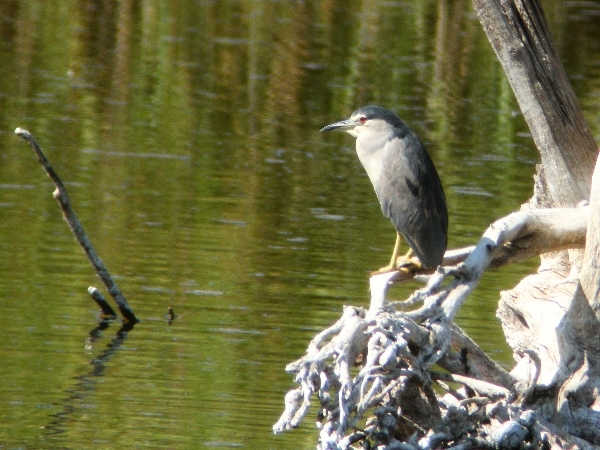 A quick visit to Laguna Tarelo produced a massive 27 MARBLED DUCK, ​I don't think I have seen so many together in Spain, we also added Northern Shoveler and we saw several more Night Herons. 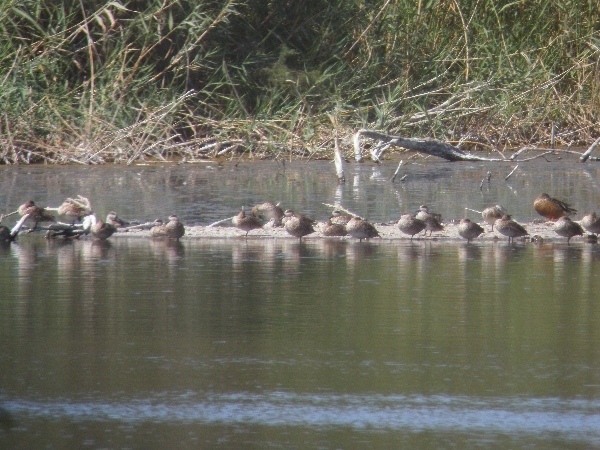 some of the 27 Marbled Ducks

Lastly we visited Chipiona Marina to look for the resident LITTLE SWIFT ​at the usual colony, wesaw three of them, a great bird to end a terrific day's birding. 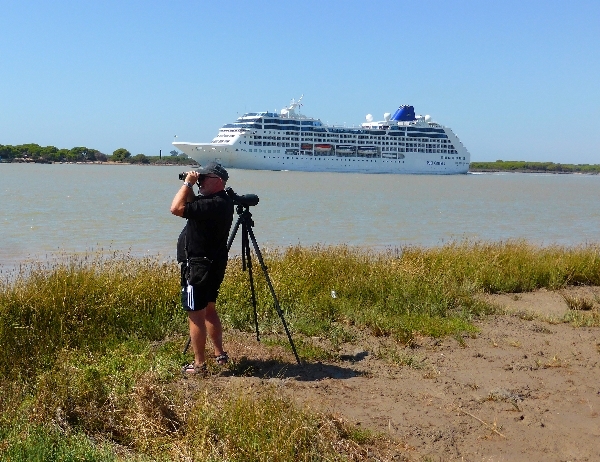