Well I finished off my tour to the Isles of Scilly in windy and wet conditions and I have now started my tour of Dorset in worse conditions, how nice!

I met Mike and Lorna at our guest house in Weymouth late morning and by 12 noon we were out birding at Lodmoor. Despite the very strong wind we managed to find shelter along the west side of the reserve behind the trees and bushes. We quickly found Black-tailed Godwits, a single ‘white’ Ruff, some Teal, Gadwall, Wigeon, Little Grebe and Canada Geese. The pools were covered in gulls, mostly Black-headed but also Mediterranean, Herring and Great Black-backed Gulls. 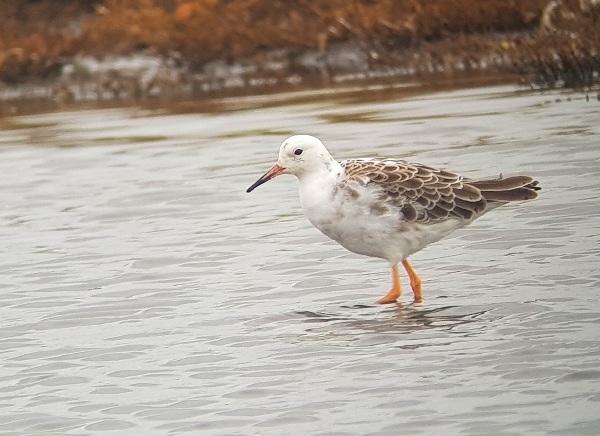 Our main target bird was the GREY PHALAROPE which had been seen recently on the far side of the reserve, fortunately for us the Phalarope flew over towards us and landed at the far side of the nearest pool. Smashing, we had great views of it, but before we had time to take pictures it was off again, this time it disappeared behind the reed beds back along the path that we had arrived on. 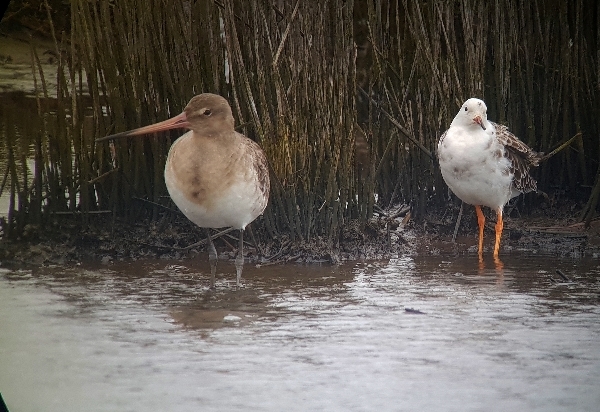 Black-tailed Godwit with the Ruff

We couldn’t relocate the bird but we did have great views of Cetti’s Warbler, Marsh Harrier and both Little and Great Egrets. A light brown flash of colour dashing through the reeds was most probably a Bearded Reedling but we couldn’t be certain. 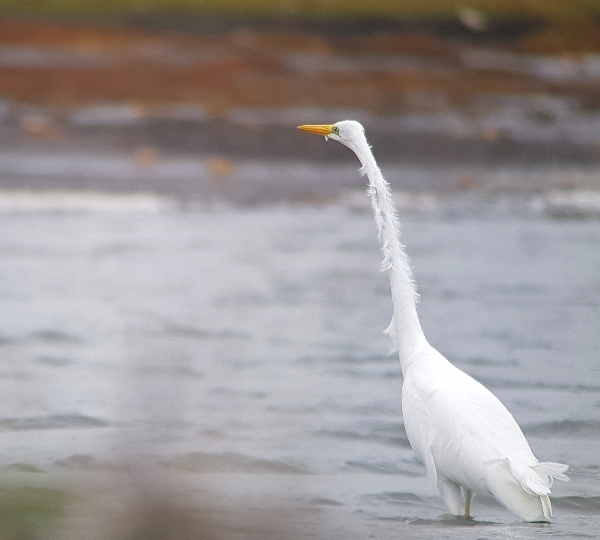 The Great Egret, feathers ruffled by the wind

After buying lunch and eating it near the tennis courts along Radipole Lane we looked over the main pool at Radipole Lake RSPB reserve. We added Tufted Duck, Shoveler, Common Pochard and Grey Heron to our list.

Just before we collect Rita and Ann from the train station in Weymouth we took a coffee in the visitor’s centre at Radipole. The car park was covered in Black-headed and Mediterranean nGulls and a few Pied Wagtails.

Ferrybridge in the wind

After collecting Rita and Ann we drove across town to our guest house, our new comers were too tired to come out birding so Lorne, Mike and I continued without them. A short drive found us at Ferrybridge, we parked the bus and walked from the Ferry Bridge (derelict) pub up to the visitor’s centre. 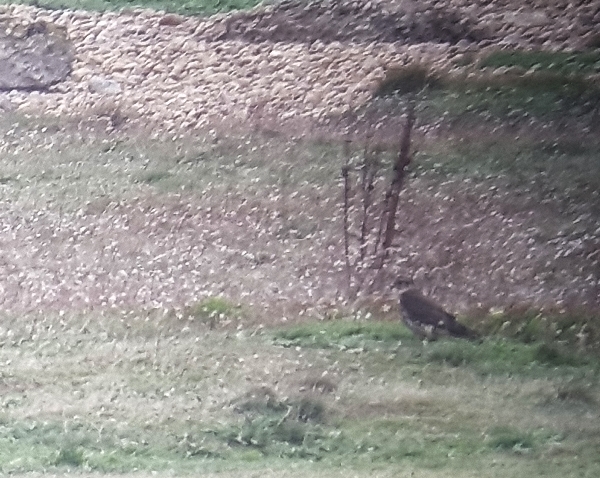 a record shot of the Merlin

Because of the strong wind we didn’t find many birds until we reached the shelter of the visitor’s centre buildings. We scoped the mud flats and found many birds, there were dozens of Greater ringed Plovers, fewer Dunlin, three Ruddy Turnstones, two Bar-tailed Godwits and a single Oystercatcher.

All of the wader took tom the air as a Merlin dashed across the mudflats, it chased a single bird but missed it. Then the Merlin returned and landed on Chesil Bank, we scoped it and had reasonable distant views.

Our last bit of birding was done from Portland Castle where we found shelter to scan the harbour. We only saw Cormorants, Shags, Ruddy Turnstones and a couple of Rock Pipits. It was now approaching 5pm, the light was fading and it started to rain again, that was our cue to leave and call it a day.