WEATHER: All day sunshine, top temp 27C it felt like 30+ at times, not much breeze.

Today Barbara and I left Gaucin around 9am and head eastward up to Ronda, it was a glorious morning, fantastic light and a cloudless sky. We notched several groups of Bee-eaters along the way along with numerous sightings of Barn Swallows, House Martins and the odd swift sp.

Our first stop was in the rugged mountainside 10 km south of Ronda, we parked at the side of the road and scanned the limestone ridges above us. A Black Wheatear was found immediately and at the same time an adult Bonelli’s Eagle drifted away over the same ridge, wow, what a start. We then had brief views of both Rock Bunting and Blue Rock Thrush but both were distant and I found it hard to get Barbara to see them.

Brown and barren? No, the Encinas Borrachas Track is full of wildlife

looking back to the gate and the car, Barbara can be seen sitting there

Next we parked up at the entrance to the Encinas Borrachas Track where the a flat rock-strewn plateau sits between much higher limestone ridges. We got on to a Black-eared Wheatear as soon as we pulled up and then several Common Stonechats went on to the list. 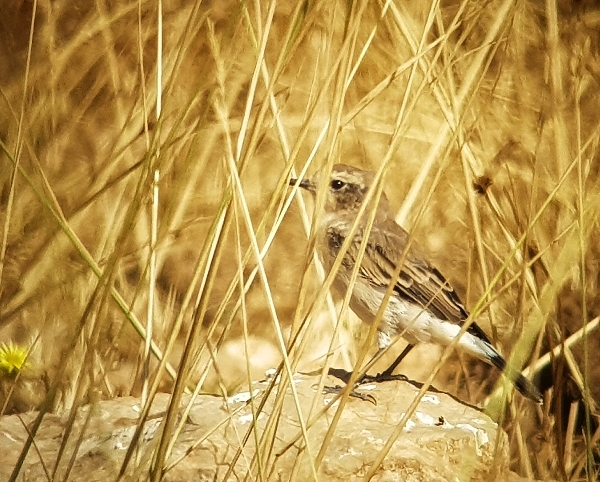 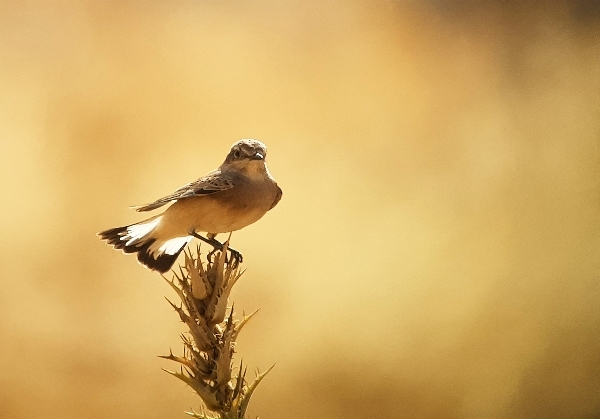 After settling down on the edge of the track we spent an hour just scanning the plateau and the scrub on the slopes of the mountains. Another great sighting appeared shortly afterwards, it was a female/juvenile Common Rock Thrush. It was a bit distant and it sat still on a fence for quite a while which was fortunate as Barbara had a lot of trouble seeing it through the scope. 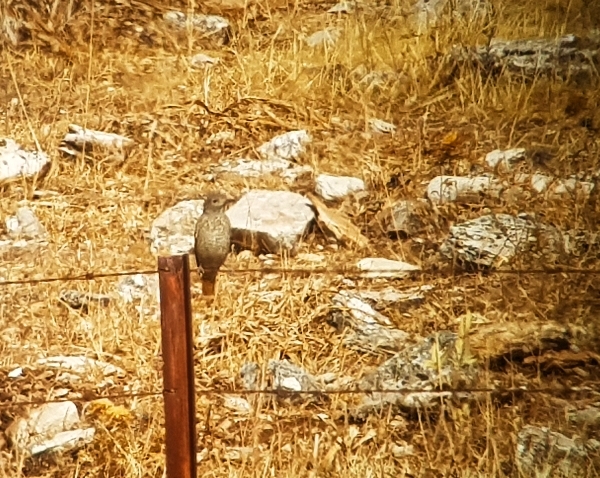 record shot of the Common Rock Thrush - it was distant!! You can just make out the red underside to the tail

We then watched an adult Iberian Shrike and a few Goldfinches dashed around, the plateau looked quite barren but with careful scrutiny you see a good deal of movement. I went for walk alone as Barbara is limited on her feet which is a pity. I had much better views of Black-eared Wheatear but did not find much else. 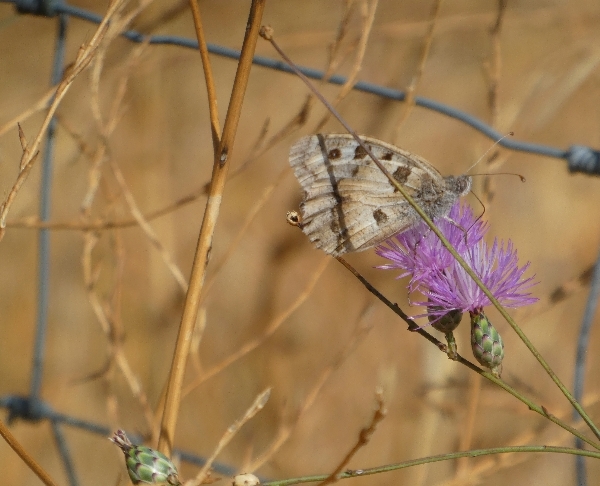 From there we drove to the outskirts of Ronda and turned onto the San Pedro road where Barbara forced me to stop for coffee. From our table we saw the only Honey Buzzard of the day along with Booted Eagle and several Griffon Vultures. 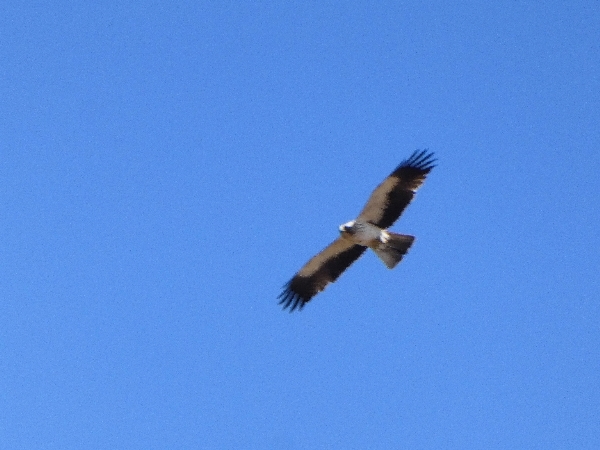 At the natural park of Sierra de las Nieves we parked in the entrance car park and sat in the shade at one of the picnic tables. We then enjoyed a fabulous hour of bird watching. Several Common Redstarts dashed from tree to floor and back again, always perching nicely out in the open. We saw a huge flock of Bee-eaters, another Booted Eagle, Eurasian Sparrowhawk and a Woodlark.

From time to time we picked up warblers in the small trees scattered around the barbeque area, I picked out a female Subalpine Warbler and then to my great delight an adult male Spectacled Warbler, fabulous but I couldn’t get a picture of the latter. 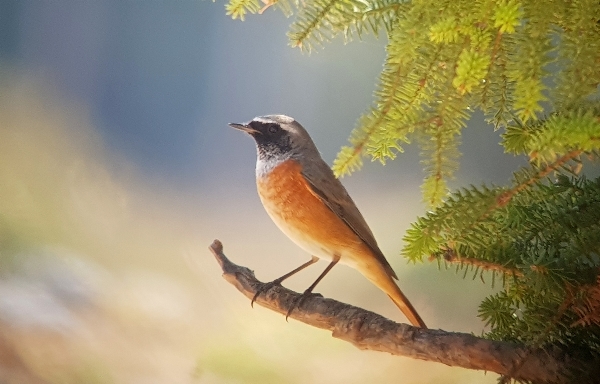 Common Redstart sitting in a Pinsappo Pine - a rare tree indeed, look it up 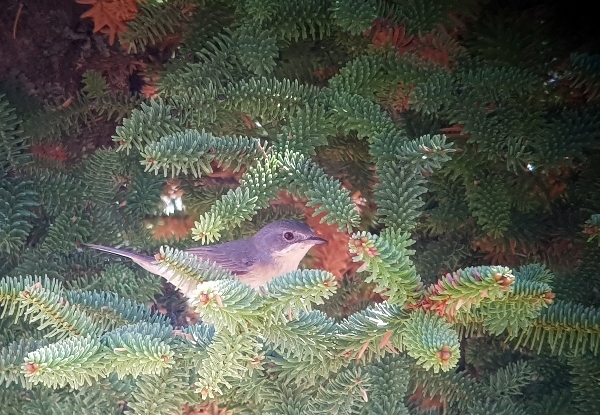 Subalpine Warbler in the same tree as the Redstart

Lastly, we drove a short way into the park and set our stall out right next to a drinking trough. This is a regular Autumn stop for me because the trough leaks and small pools of water can be found around the immediate area and birds love to bathe there. It was tremendous birding again, we sat in the car for an hour positioned very close to the trough and watched 12 species of birds come down to drink or flit around in the trees nearby. 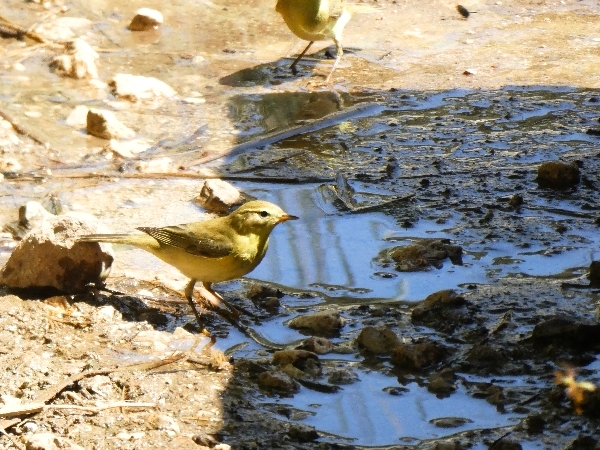 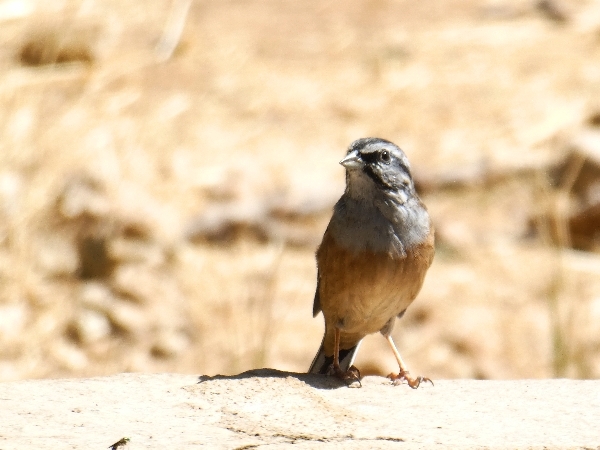 Rock Bunting on the trough 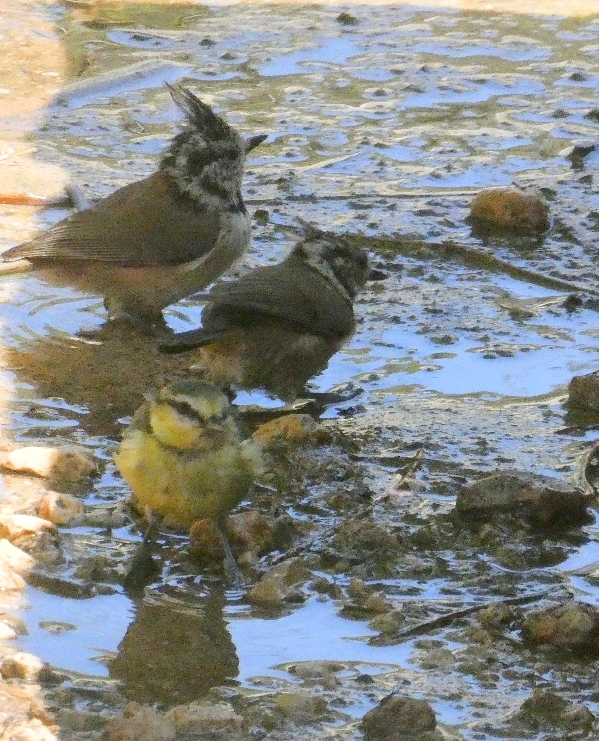 Blue Tit with a punk rock Crested Tit and its youngster 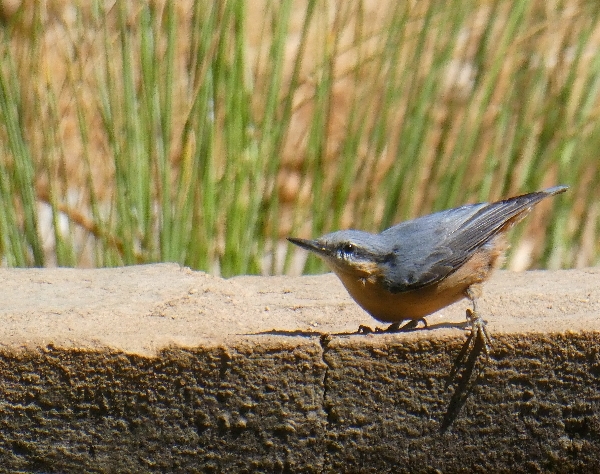 At one stage we had Blue, Great and Crested Tit with a Willow Warbler in one small pool!! We also watched Cirl and Rock Buntings, Great Spotted Woodpecker, Chaffinch, Eurasian Nuthatch, Chiffchaff sp and both Spotted Flycatcher and Firecrest (well found by Barbara) fed in and around a nearby tree. 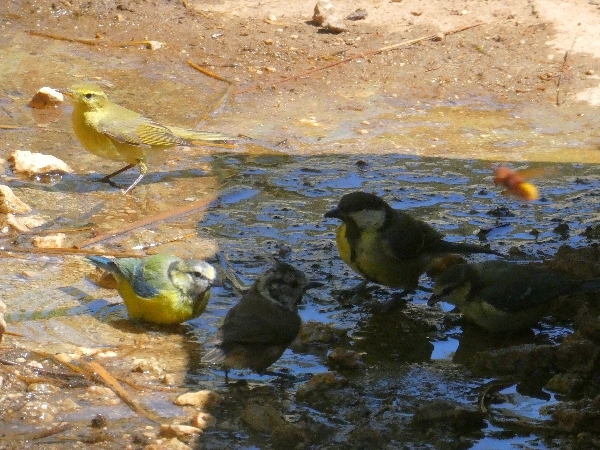 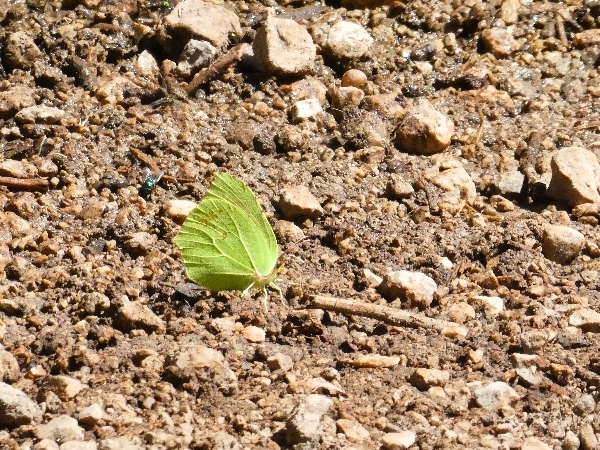 It was 2pm when we left the drinking trough, Barbara was thrilled to bits to see so many birds, so close up. We stopped just outside the park to eat lunch at roadside restaurant. Barbara enjoyed Carrillera (pig’s cheeks) for the second day running!!!