WEATHER:  Atrocious!! Very windy, low cloud and rain for most of the day!

Despite what the weather could throw at us we decided to take the boat to Tresco, but before sailing at 10 am, we left the guest house at 9am and walk around to Porthmellon Beach, which was relatively sheltered from the southerly wind that was battering the island. It was high tide so not much sandy beach was visible all we saw was two Ruddy Turnstones.

New Grimsby as seen from the boat

The next stop was the pastie shop, we then went to the quay to board our boat to Tresco. The sea was quite calm as we were in the lea of St Mary's it was quite a pleasant trip across to Tresco, we saw a few species such as Sandwich Tern, Shag, Grey Heron, Oystercatcher and the usual gulls.

On Tresco we had three main target species, Eurasian Hoopoe, Short-toed Lark and Ortolan Bunting, so once back on terra firma that's what we looked for.

the harbour at St Marys

From our landing point at New Grimsby we marched across the island towards Old Grimsby we saw a few Meadow Pipits, Stonechat and Common Sartings. We found ourselves in Back Lane, the site of where a Eurasian Hoopoe had been favouring for the last 6 days. It was blustery and raining and not very pleasant standing at a five-barred gate looking into a grass meadow. We did find our first Spotted Flycatcher and we saw a flock of over 100 Linnets, but not the Hoopoe. 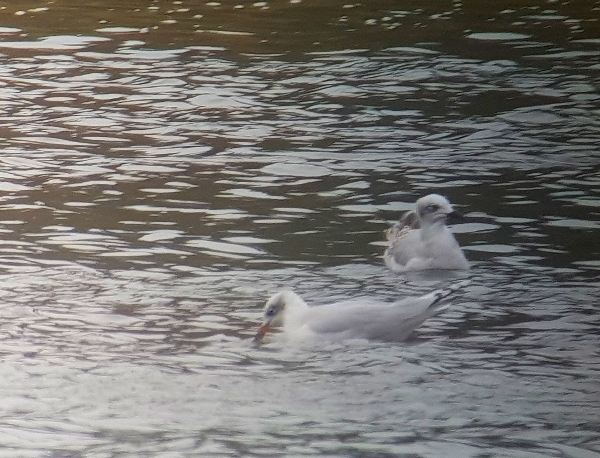 a couple of Med Gulls seen on Tresco Great Pool

With our first dip-of-the-day in the bag we walked back to New Grimsby and on to the Tresco Great Pool, the pathway along the northern side was really quite calm , sheltered by the dense line of trees and bushes that run along the margin of the lake. Several Barn Swallows were feeding there, we also saw a lot of common species such as Robins, Wrens, Dunnocks, Blakbirds, Song Thrushes, Blue Tits and Great Tits.

We settled into the first hide we came to, the 'Swarovski Hide' and enjoyed a nice time watching many birds out on the lake whilst eating our pasties!  A remarkable 17 Greenshanks dropped in, we had already counted four Redshanks and singles of Common Snipe and Dunlin and we added Gadwall, Teal, Mute Swan, Common Coot, Med Gull and Moorhen to the list.

We continued along the sheltered northern edge of the pool noting Grey Wagtail, Chaffinch and more common species, we then visited the 'David Hunt' hide. Very little was seen from there and the wind was blasting us in the face through the windows of the hide.  So we battled our way round to the Heliport where our second and third target biords were supposed to be.

The small airfield was littered with small birds and a few Common Pheasants, mainly Meadow Pipits but also Northern Wheatear, White Wagtails and Common Stonehats. We searched for an hour before diving into the only cafe open on the island for a nice warm cuppa and a cake. We saw a Red Squirrel whilst drinking our warm drinks. 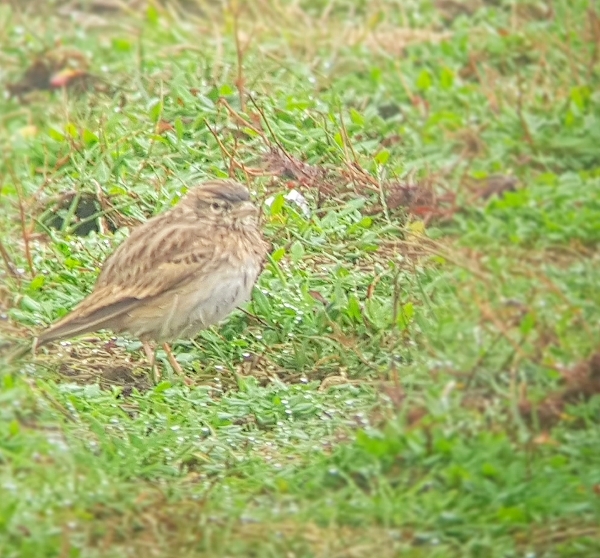 In a short space of time the rain stopped, the wind eased off and the light improved somewhat, so we made a second attempt to see our target birds on the airfield. Soon we found the Short-toed Lark, a bedraggled looking specimen, hardly recognisable as a lark, but it was the bird. We then spent a further 45 minutes looking for the Ortolan Bunting but it never showed, we find our first Whinchat of the trip.

At the quay at Carn Near we added Little Egret to the list before boarding the boat back to St Marys, ironically the sun came out during the journey back! Everyone was too worn out to continue birding so we called it a day and went straight to the guest house for a hot shower and a lovely dinner.