The boat trip around Lake Kerkini was, for me, the highlight of this tour, it was fabulous and we had perfect weather for it. A bright morning and no wind, the lake was like a mill pond absolutely stunning. We arrived at the Jetty at 8am a full hour before the boat trip so that we could enjoy the birds in the reedbeds, trees and marshy area. As usual birds were everywhere and bird song came from the all directions, the Great Reed Warblers were making the most noise of course. 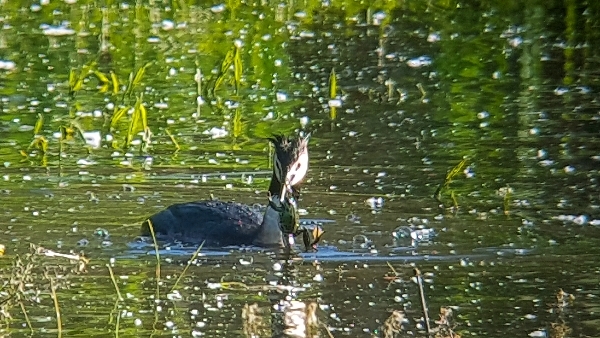 Once on the boat we set off for the centre of the lake where we saw our first Black-necked Grebes of the trip and ahead of us were dozens of both Black and White-winged Terns, none of those could be seen from the shore. The lake was covered in Great Crested Grebes I have never seen so many, thousands of pairs are nesting here, Cormorants number in tens of thousands and Pelicans too are in huge numbers. 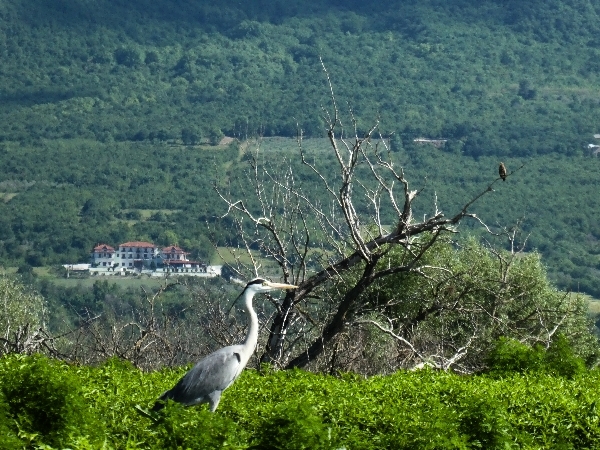 Our rip took us along a river mouth where hundreds of Sand Martins were breeding in the banks, we passed through the nesting colonies of the Cormorants , both Great and Pygmy, they were joined by hundreds of Egrets and Herons. We saw Little, Great and our first Cattle Egrets (there are now 3 pairs nesting in the colony), these were joined by Eurasian Spoonbills, Squacco and Black-crowned Night Herons, it was colourful, noisy and a bit smelly! But still an amazing experience! 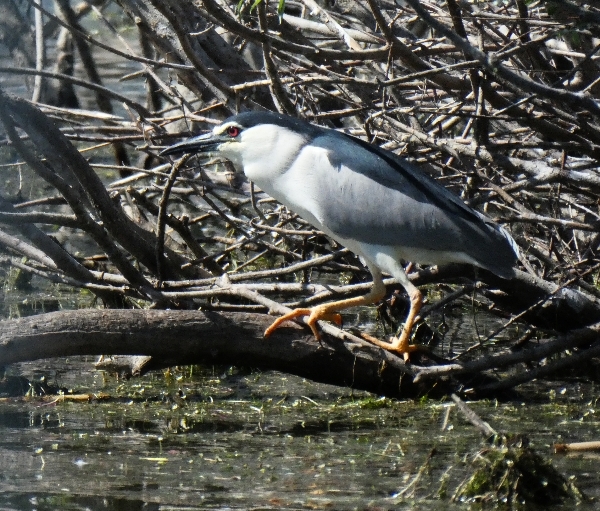 We added Greater Flamingo to our list as we drifted past just three of them, the last remnants of a wintering flock. We saw Lesser Spotted Eagle perched on a dead tree, Marsh Harrier, Common Buzzard and Levant Sparrowhawk flew over us. 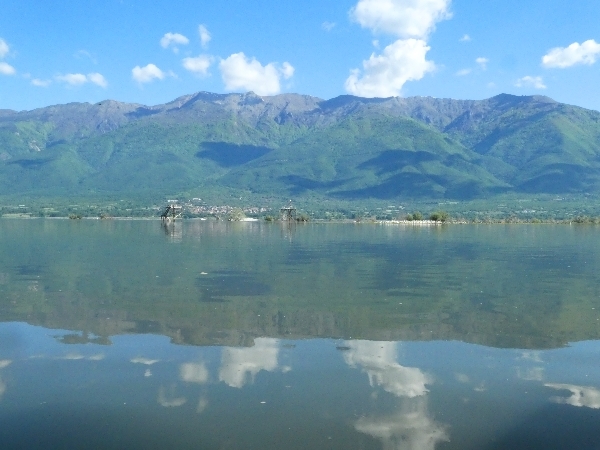 Our trip lasted 3 hours and it went by in a flash, our cameras were red hot and we were ready for lunch, but what a great experience, a truly magical wildlife encounter. 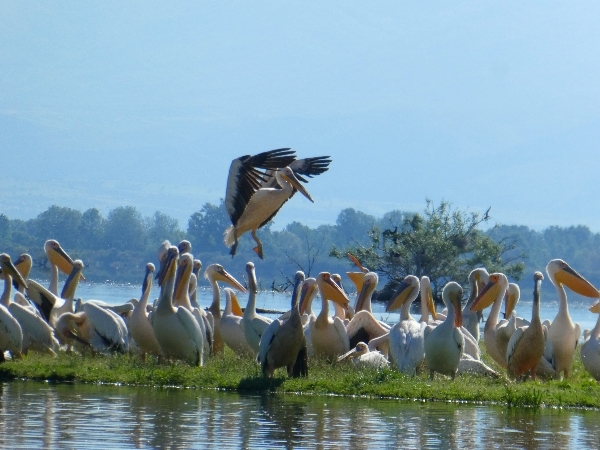 BOTH WHITE AND DALMATIAN PELICANS ARE SHOWN HERE 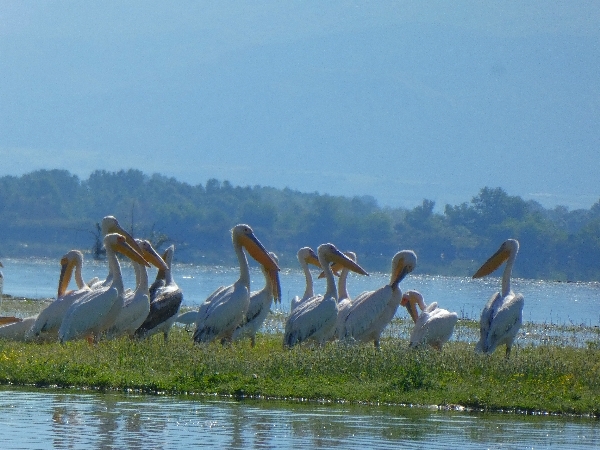 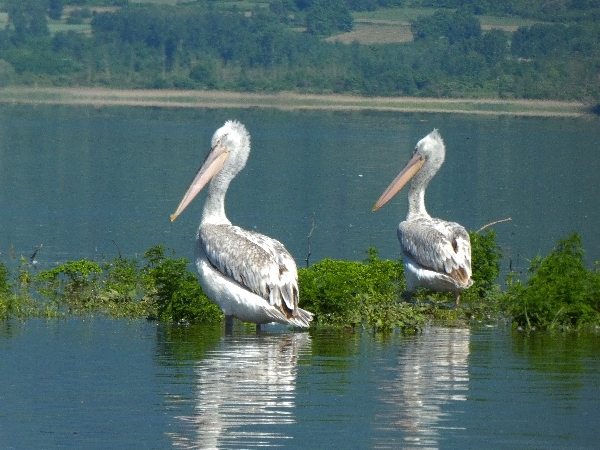 Anything else we achieved today would be a little underwhelming but we soldiered on. We bought our lunch in the village of Kerkini, we sat and had coffee near the main square and we ate our lunch at the ‘port’ of Kerkini. A brief stop at some small reed-fringed ponds just after lunch produced Little Bittern and a possible Moustached Warbler but we didn’t get a good enough view of the warbler.

For the rest of the afternoon we visited another large Lake on the border with Macedonia about 40 kilometers away. This lake is deeper and the water much cooler so that the number of breeding birds is very much lower. We saw the usual species but our main efforts were direted at searching the reedbeds and scrub for warblers and such-like. We found a Penduline Tits nest, a beautifully constructed ball of fluff! The nest was active and had great enjoyment watching the parents bringing food to the chicks hidden inside.

One stop was made to look at our first Northern Lapwings and in the same area we saw Black Stork, Whinchat, Black-headed Yellow Wagtail, Lesser Grey and Red-backed Shrike, Turtle Dove and Olivaceous Warbler. 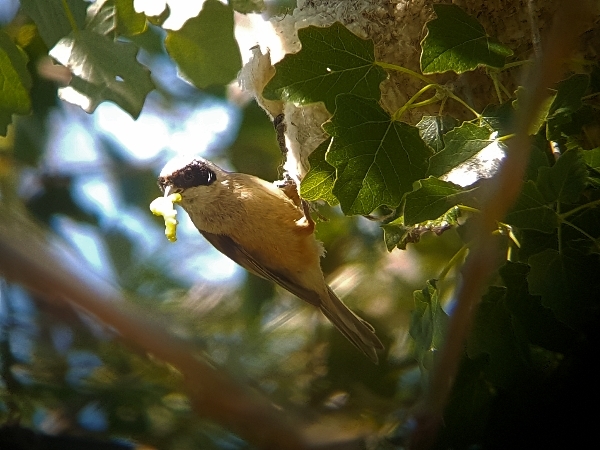 A reedbed held singing Reed Warbler and one of the group wandered off and came back with a report of a calling Savi’s Warbler but it never called whilst we all looked and listened for it. We walked along a concrete walkway very close the to border and scanned the lake, we added a few species seen in Macedonia such as Black Tern, Pygmy Cormorant and Great Crested Grebe. We found Sedge Warbler and Tree Sparrows along the walk.

Our journey home went uneventful, we arrived back at the hotel at 5:30pm and had an hour’s siesta before setting off out again for an early evening jaunt to a nearby quarry. An Eagle Owl had been reported in the quarry quite early in the evening last night so we thought we would give it a shot.

We arrived at the quarry at 7pm, it was still quite light, we found Black-eared Wheatear, Blue Rock Thrush, Cirl Bunting and not much else. We scanned the quarry for the better part of an hour when some other birders turned up, they pointed us in the direction of last night’s sighting but still the owl did not show.

At 8pm we were leaving when Dancho our local guide found the owl, a Jay was mobbing it and that drew his attention to a rocky area quite high up. We all had superb views of this giant of an owl, a great bird to end our perfect day.