WEATHER; our hottest day today with 29C and not much of a breeze.

It was a ‘bitty’ day with lots of short stops as we drove to sites for specific target species, we hoped to ‘clean-up’ some of the island’s most wanted species.

Kruper’s Nuthatch was the first target species, we decided to go early for this bird. It was a 20 minute drive from the hotel we set off at 6am. A short walk into the forest produced the goods, we bumped into a family party of Kruper’s, Mervyn heard them first and quickly got onto them. We also found Long-tailed Tits, Serins and we located the nest of the Short-toed Treecreeper with both adults going to and fro with food. On our return journey we stopped off at Mesa Marsh where we found two Garganey and had ‘scope views of Great Reed warbler and a fine male Whinchat. 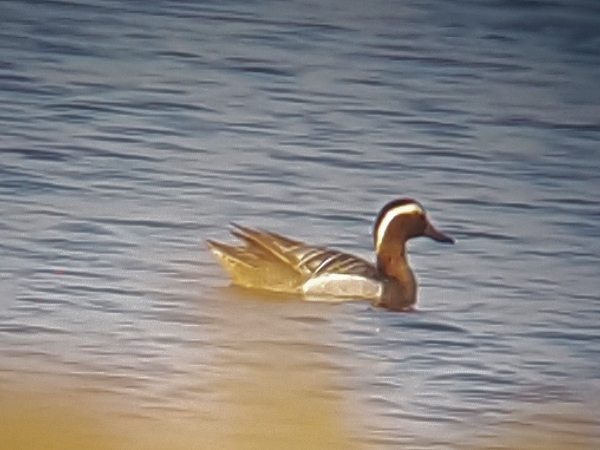 One of the two Garganey seen today at Mesa

After breakfast  we made an unscheduled visit to the eastern side of the salt pans where the presence of a DALMATIAN PELICAN had been reported. We saw the bird in a distant ‘pan’ but with the scope we all had reasonable views of it. Other birds seen from the raised bank were 41 Grey Plover (this is an incredible record as previously only small groups have been recorded), there was also a flock of 17 Marsh Sandpipers (this was the remainder of a flock of over 40 birds – another incredible record).

Our main plan was to visit the north coast on this bank holiday Monday on the way we pulled into the ‘Scop’s Copse’, a disused five-a-side football field where a collection of mature Eucalyptus trees have been attracting roosting Scops Owls for years. We saw two birds in separate trees, they weren’t showing too well but enough for our enjoyment of them. 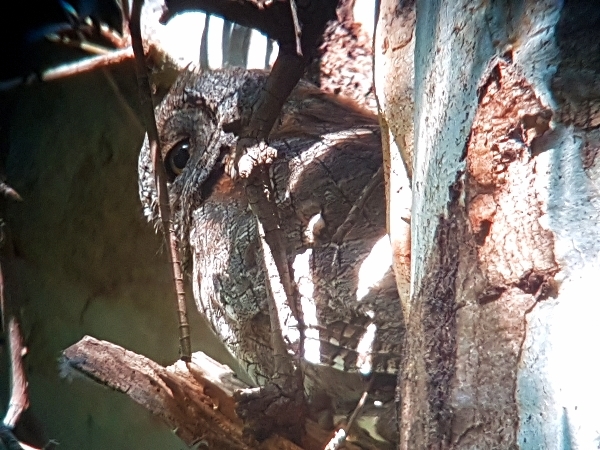 a poor record shot of the Scop's Owl

At the raptor watch point we stayed an hour in very warm sunshine, the band stand gave us some shelter from the sun. Two Goshawks flew over a ridge and circled to a great height and then distant Short-toed Eagles flew along the ridge. Long-legged Buzzards showed on and off and a single Black Stork flew over. Birds seen on the rock hillside behind us include: Black-eared Wheatear, Western Rock Nuthatch, Cirl Bunting and Orphean Warbler.

Kavaki is the name given to cliffs above Petra as the road climbs toward Molivos, the scrub on the hillside leading down to the cliffs is home to the resident Ruppell’s Warbler. A single male was seen and did he perform well, what a lovely little gem. We also saw Bottle-nosed Dolphins in the bay, Blue Rock Thrush, Eastern Black-eared Wheatear and some Linnets. 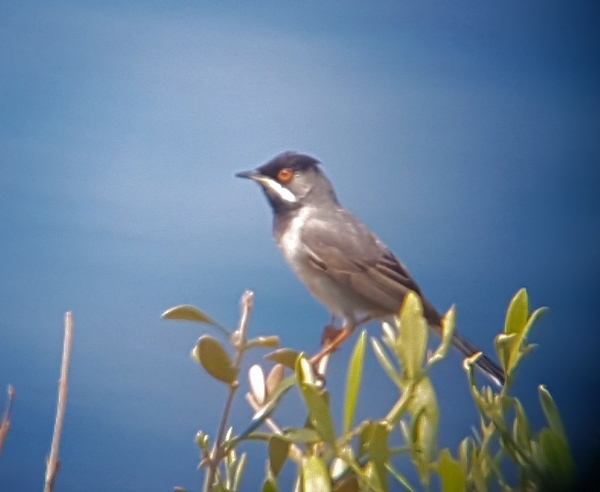 We ate our lunch sitting next to the Reservoir at Petra where over 500 Yellow-legged Gulls loafed in the water or on the exposed reservoir lining. We scanned through the gulls for a single Audouin’s Gull without success, the bird wasn’t there. We did see Ruddy Shelduck, Common Coot and Wood Sandpiper. The butterflies around us were amazing with dozens on every flower, Meadow Brown, Marbled Whites, Cardinal Fritillary, Copper Brown and Scarce Swallowtails were the main species.

From Petra we drove straight to the Kremestis Track which is kind of a short cut between Petra and Napi, the famous bridge, built by the Turks is an island treasure. Very few birds were seen along the track, we stopped a couple of times and we did see Middle Spotted Woodpecker and a Short-toed Eagle but nothing more. On the Napi Road we stopped to venture into an olive grove to look for an Olive Tree Warbler. Despite hearing one call we failed to see it, we also heard Eurasian Hoopoe and Common Nightingale. 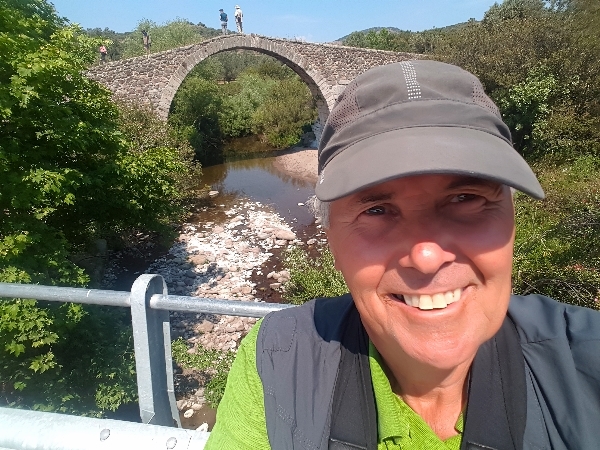 A selfie at the Kremastis Bridge

Our penultimate birding stop was at the mouth of the Tsiknias River we searched the Tamarisk Scrub for a reported Rufous Bush Robin and after a short while we located one from its song. The bird flew around quite a lot but we managed to see it well and photograph it. A nice showy Olivaceous Warbler was also nice to watch. 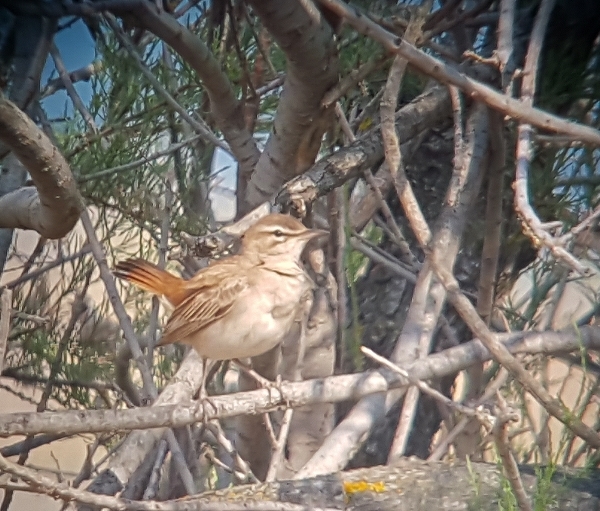 Finally we drove out to the west side of Kalloni to Kalloni Village where a bridge crosses the Potomia River. A Great Bittern was supposed to present for the last two days. It was quite windy when we arrived, our chances of seeing the bird were slim to no chance. We opted for the latter and came away empty handed.

A relaxed dinner was taken at 7:30pm, the bird log revealed that our trip count is now 130, with 3 days to go it looks like being a low total of around 160 for the trip.