WEATHER; It rained this morning but very lightly, the clouds cleared later and it became very hot and humid.

Today was our last full day on this birding ‘treasure Island’ but instead of dashing around trying to see species that we had missed during the past few days we took a leisurely approach. The truth is, most of the group were getting a little tired and the long days had taken their toll. However, at 6am it was a full turn out for our early morning jaunt.

The Rose-coloured Starling was still appearing at the Tsiknias River-ford favouring a mulberry bush which was now fruiting. We stopped at the river mouth on the way and saw a wonderful group of Squacco Herons, 15 of them were standing in full view in and along the eastern bank, they looked superb in the morning light. A nice surprise was the appearance of a Spur-winged Plover, this little beauty worked its way up the river and eventually disappeared round a bend. 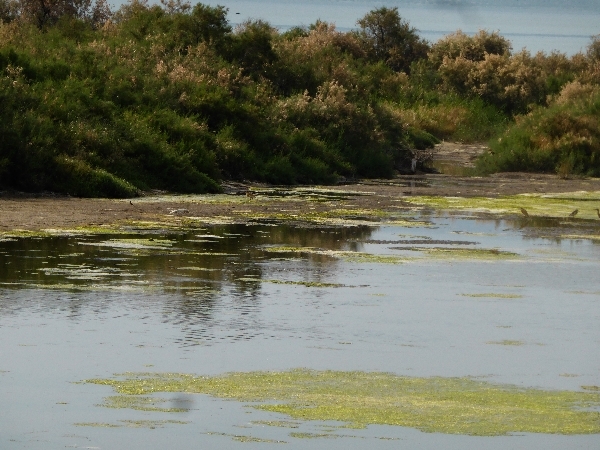 We drove round to the small lake at Metochi, it is always a favourite place for my groups and this group was no exception. It is a fabulous place at this time of the day, always tranquil and the water, dead still. We saw the usual Little Crake, Little Bittern, Little Grebe, Reed and Sedge Warblers as well as a family party of Mallards. We took a quick look at a second pond not far away to try to add Night Heron to our list, but we were unsuccessful, so we returned to the hotel for breakfast. 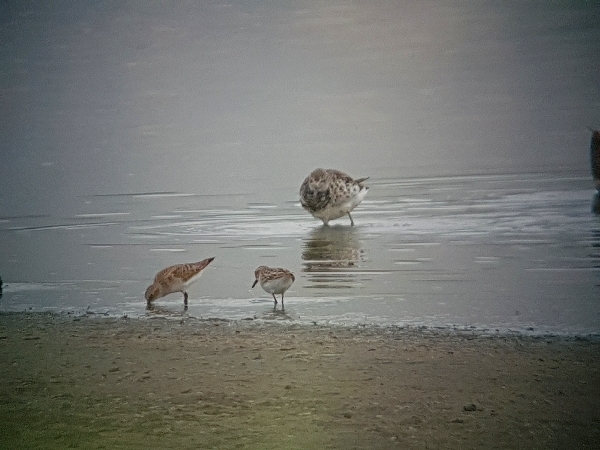 News of the appearance of two Broad-billed Sandpipers o the Kalloni Salt Pans was gathered during breakfast and as the site was en-route for us we dropped in not long afterwards. We found the Sandpipers, about 300 meters away at the back of the most eastern ‘pan’, they were dots in the scope and not everyone in the group could make them out. Other waders present included; Little Stint, Curlew Sandpiper, Grey Plover, Pied Avocet, Ruff, Marsh Sandpiper as well as dozens of Greater Flamingos and the Dalmatian Pelican.

At the Marshes near Mesa we watched a Single Garganey, yet another Citrine Wagtail (female) and the usual Wood Sandpiper, Ruddy Shelduck and Moorhen. Further along the marsh we looked for Great White Egret but found only Little Egret, Grey Heron and a fly-over Black Stork.

For our picnic lunch stop we drove back towards Kalloni and turned down a track to the beach, a deserted beach-café area had a couple of picnic tables and seating, a lovely breeze came in off the sea. There was a sand-bar just along the shore where a gathering of Yellow-legged Gulls sat. We scanned the gulls and found two Gull-billed Terns and a single Black-headed Gull, it is worth mentioning that the Black-headed Gull is uncommon on Lesvos and it was our first of the trip. A Whimbrel flew by as we sat and ate our lunch. 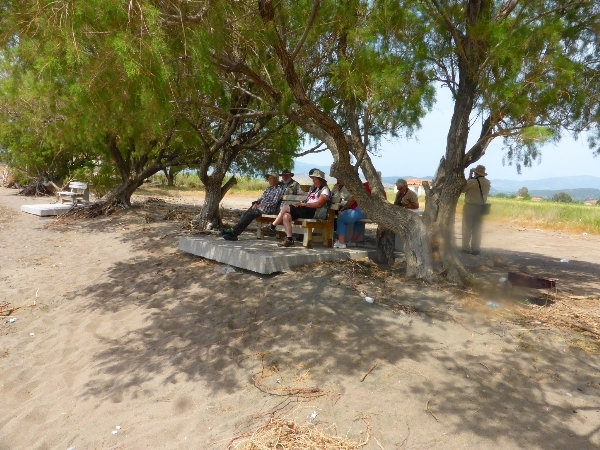 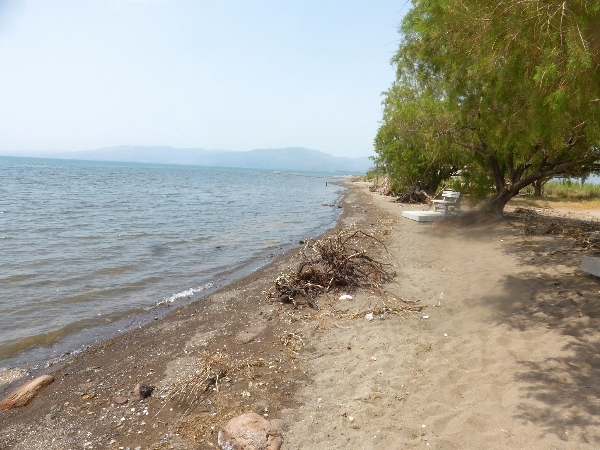 After we had eaten we went for short walk to an inlet just passed the sand-bar, we found the Whimbrel on the bank and an Oystercatcher both were new birds for the trip. A couple of Grey Plover, one of which was in full summer plumage, also fed in the inlet. We ‘scoped Whinchat, Corn Bunting, Crested Lark and Black-headed Bunting. It was now very hot and approaching 2pm so we decided to take a siesta and we returned to the hotel.

At 4pm we reconvened for another couple of hours of birding, it was still very hot but the edge had gone off the glaring sunshine. A quick visit to the marshes at Paralika to the west of Kalloni produced one of our wanted species, the Great White Egret. Two of them were present along with a single Little Egret and not much else on the water. 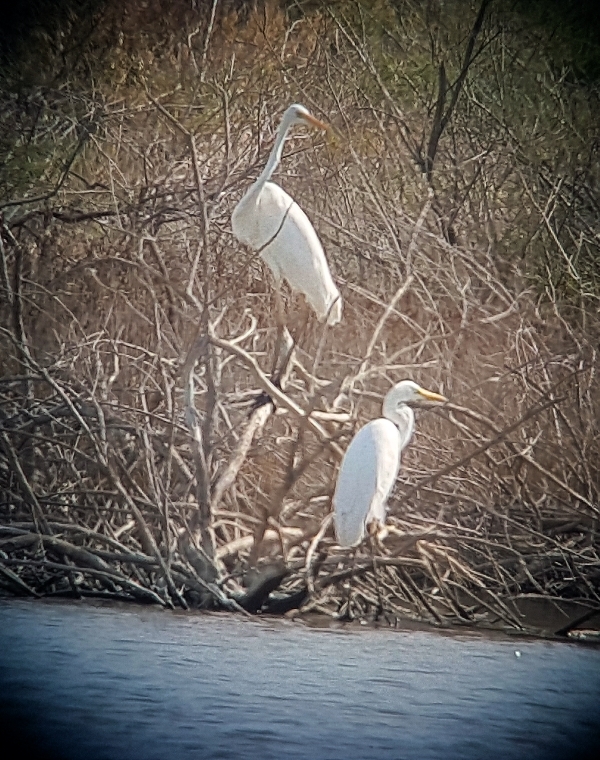 In the surrounding scrub we saw Cetti’s Warbler, a Whinchat and a Pied Flycatcher, scanning the hills we saw Short-toed Eagle and Long-legged Buzzard, a very brief sighting of two Sparrowhawks, raised our hopes of seeing a Levant’s Sparrowhawk but the birds were distant, the views were very brief and the light wasn’t good.

From the marshes we drove back to Skala Kalloni and onto the Tsiknias river bank to take another look at the Rose-coloured Starling by the ford and as luck would have it the bird showed very well, now everyone got to see it in the scope at last, a female Blackcap was also a very good find and our first for the trip. After watching the starling feeding on mulberries we were distracted by a fly-over Night Heron, another first for the trip. 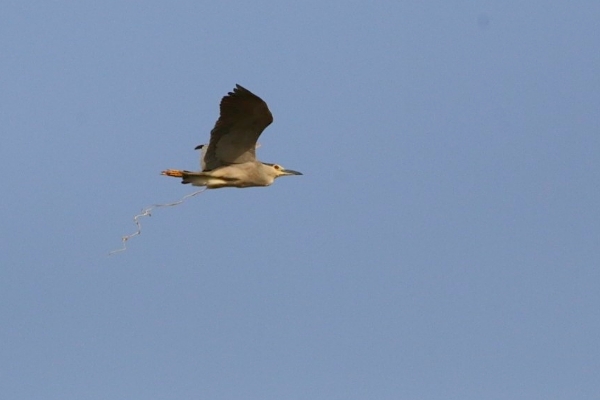 another picture taken by Mike Taylor of the Night Heron

It was now 6pm and we had decided to call it day at that time in order to get some packing done and to prepare ourselves for an evening in the village square where we intended to eat. It was a lovely night out, plenty of laughter at the table. We took a vote for bird of the trip, the Rose-coloured Starling took 9 votes out of 12.

We counted our trip total which reached 153, which was a great effort in a very poor year for most migrant species, well done to all the group.