A great start to the holiday as the group assembled in Gatwick departure lounge on time,  our flight was as scheduled, the bus was waiting at Mytiline Airport and the staff at the hotel were pleasant and efficient on our arrival. All we needed was good weather and lots of birds! We got the birds but had to endure cold and damp weather. A few sightings were made on the journey from Mytiline airport; Common Cuckoo, Hooded Crow, Raven, Greater Flamingo and Pied Avocet to name but a few.

We were unpacked and back out on the hotel terrace by 3:30pm, a Common Nightingale sang from the hotel garden as we made our way to Kalloni Pool, recent rain meant some water was still present in the marsh fringes. We found Squacco Heron, Purple Heron, Glossy Ibis, Wood Sandpiper and Yellow-legged Gull at the pool and added White Stork, Greater Flamingo, Common Tern, Corn Bunting, Crested Lark, Spanish Sparrow and Little Egret in the salt marsh next to the Christos River. A Common Nightingale sang from high up in a poplar tree showing extremely well in one of the hotel gardens we all had in-the-scope views.

From the bridge over the Christos river we found a fly-over Black Stork and a Gull-billed Tern, it was quite cold in this exposed area so we jumped back into the bus and drove to the River Tsiknias where we spent the rest of the afternoon. It was fairly quiet by Lesvos standards but excellent for a group of island ‘freshers’ like ourselves. From the vantage point near the river mouth we found Common Tern, Wood Sandpiper, Temminck’s Stint, Little-ringed Plover, Cetti’s Warbler and Common Swifts. 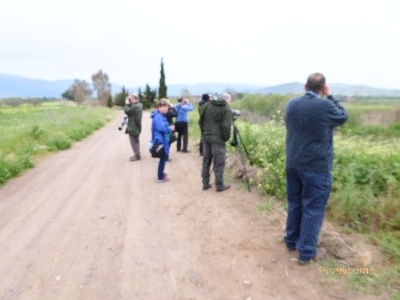 the group looking into the Tsuknias River along the raised bank

In surrounding fields we saw both Common Buzzard and Long-legged Buzzard as well as Black-headed Bunting, Greater Short-toed Lark and several large flocks of Spanish Sparrow. Then we hit a purple patch, we watched a pair of PENDULINE TITS nest building, followed by great views of Little Bittern and we scoped Red-footed Falcon sitting next to a Lesser Kestrel! 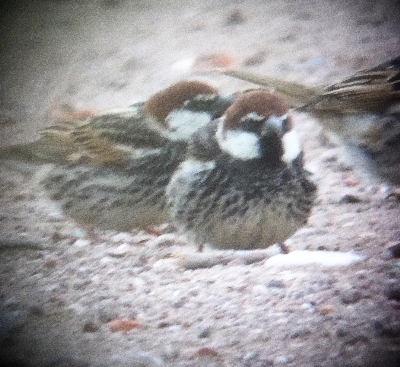 Lastly, as the light was beginning to fade, we re-visited the Tsiknias River-mouth from where we watched a couple of Black-necked Grebes just offshore, we also ticked our fourth tern of the day when we found 3 Little Terns.

A relaxing dinner was enjoyed at 7:30pm. Followed by an early night, it had been a very long day.