WEATHER: wall to wall sunshine all day, with a nice breeze.

What a fiasco we had this morning with getting up on time!!  We knew that the UK were changing to British Summer time and the clocks were going forward by 1hr and we were told that Morocco was following suit, so we all set our alarms accordingly. HOWEVER, the Moroccan clocks went backwards because of Ramadan, which threw our alarm clock out by two hours, most of us were woken up at 4am instead of 6, it was crazy.

One small gain with people getting up early was that they heard the Magreb Tawny Owl but never saw it.

Eventually we all had breakfast and got the bus packed up ready to go. Our journey today was to be to the coast at Agadir and we had one major stop about 40 kilometers away, we set off at 7:30am I think!!!

The River Sous flows through the Gorge and provides some great habitat for passing warblers, waders, herons and egrets……but not this year! It was almost dry and lots of work was being done to repair the supports to the bridge. There was bulldozers and diggers and trucks all over the place.

As soon as we got out of the bus we heard a Black-crowned Tchagra, it took a while but all got to see it well. We scanned what little habitat there was left on the west of the river from the bridge and found a single Squacco Heron and two Moorhens.

To the north we spent a lot of time searching the reed beds from a raised track and found a few more species. We walked beneath part of the gorge cliff-face where we saw a Long-legged Buzzard, House Buntings, a Blue Rock Thrush, Serin and a few Chaffinches. 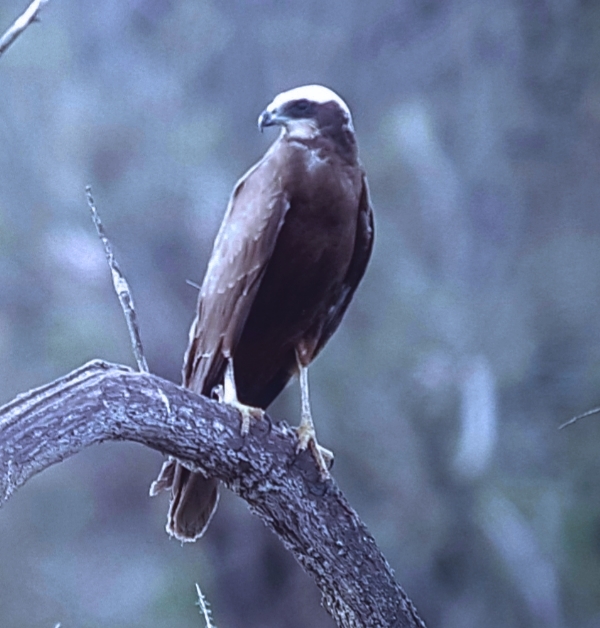 In the reeds and along a little bit of open water we found several Sedge Warblers, Cetti’s Warbler, Sardinian Warbler, Common and Green Sandpipers and a couple of Ruddy Shelducks flew past, twice.

Above we saw Booted Eagles, White Storks, Swallows, Swifts and Martins but no real passage of migrants. A Purple Heron flew up river and we picked out a couple of Little Egrets before we left. I was quite disappointed with our visit, it had been so much better in past years.

For the next 4 hours we made our way to Agadir, stopping for a another short walk which produced nothing much except for lots of Greenfinches and a few European Bee-eaters. We also stopped for lunch at a roadside café eventually arriving at our hotel around 1:30pm.

After checking in we decided to meet up at 2pm for a visit to Oued Sous nature reserve. It was lovely out there walking along the upper estuary, warm and sunny with a lovely breeze. Most of us were tired out but the lure of bird sightings encouraged us to walk. 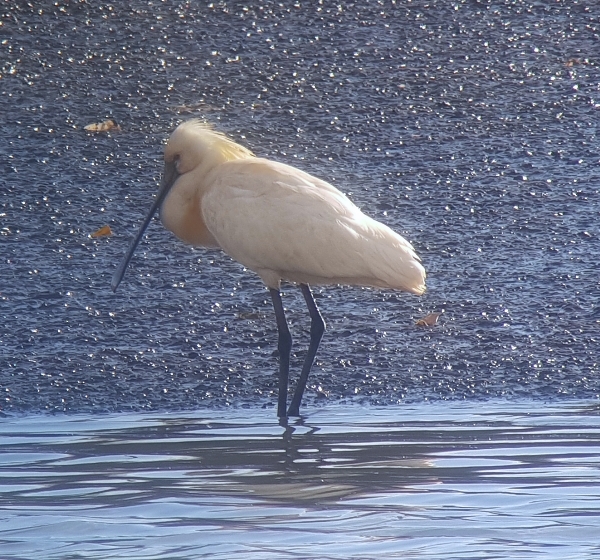 Before we reached the tidal river we found many Magreb Magpies, Spotless Starlings, Zitting Cisticolas, a single Eurasian Stone Curlew and many White storks. We had flyover Eurasian Spoonbills, Greater Flamingos and Little Egrets, Gulls were ever present in the sky too. Most of then were Yellow-legged Gulls but we also saw a single Greater Black-backed Gull, Mediterranean Gull, Black-headed Gull and Lesser Black-backed Gulls.

It was a complete wader fest once we reached the banks of the river, there were hundreds out there: Curlew, Oystercatchers, Black-winged Stilts, Avocets, Black-tailed and bar-tailed Godwits, Greenshanks & Redshanks, Ruff, Grey Plover, Knot, Dunlin, Sanderling, Great Ringed Plover, Kentish Plover and Little Stints. We also saw a nice flock of Greater Flamingos, lots of Gull-billed Terns, Mediterranean Cormorants, more Spoonbills and a nice find was a flock of Collared Pratincoles. 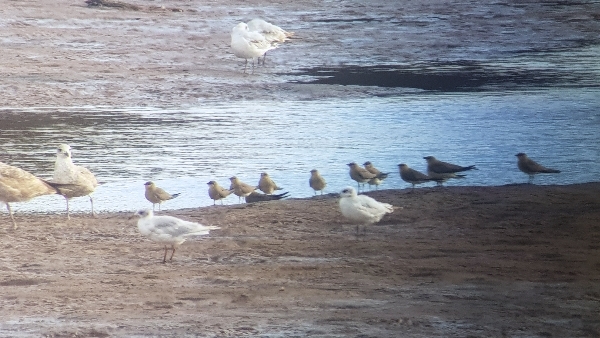 Collared Pratincoles with Mediterranean Gulls in the foreground

We also found a pair of White-faced Pintails, escapees of course but the male was stunning nevertheless.

From there we made a slow walk up towards the beach, we added Slender-billed Gull to the list and saw a few Black Kites and a couple of Marsh Harriers. It took and hour to reach the beach area where a seasonal pool usually holds a few duck and more waders.

On the pool, viewed from some raised dunes, we saw 3 Marbled Ducks (our target bird), and Grey Plover, Black-winged Stilts, Grey Herons, Little Egrets and a couple of Avocets. Some of the group walked onto the beach and found a single Audouin’s Gulls but not all of us saw because we were moved from the beach area by security guards from the Royal palace.

On the way back to the bus we saw another Marsh Harrier, a large flock of Black Kites, smaller flocks of Spoonbills and lots of Common Swifts.

It was getting dark at 7pm as we boarded the bus, some of the group wanted hang around to look for Nightjars but most of us we shattered and wanted a hot shower and dinner.

Most of us had a cold showers and dinner was uninspiring, it kind of spoilt the ending to a lovely day. This is a new and modern hotel that we have never stayed in before and perhaps will not stay again.