We ate our continental breakfast at 7am and it was just getting light as we left the hotel at 7:45 am. We drove south from Agadir for an hour before arriving at Souss Massa. One stop was made to look for a colony of Little Swifts,  however the disused garage that the birds nest in had been demolished! So there were no swifts to be seen.

Souss Massa national park surrounds the river Massa and the main track through the park lies on the north bank and runs all the way down to the beach. It is one of my favourite walks, the weather is always glorious, today was no exception, a shroud of very high cloud weakened the sunlight and made perfect birding conditions! 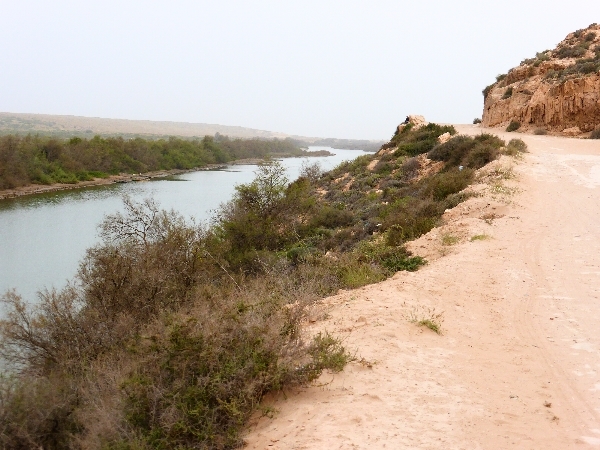 We got off the bus and walked about 1km through small farmland plots it was like walking alongside large allotments, the track undulates and on the peaks we had splendid views of the river, the wide flat bottomed valley and the distant hills about 5km away.

We listed a good number of species but generally the migrant numbers were down, a few Chiffchaffs, Subalpine and Bonelli’s Warblers were seen along with Common Redstart and our only Garden Warbler of the trip. It was the resident species that stole the show, with House Bunting, Moussier’s Redstart, Zitting Cisticola, Laughing Dove, Sardinian Warbler, Serin, Common Bulbul and a Cetti’s Warbler. 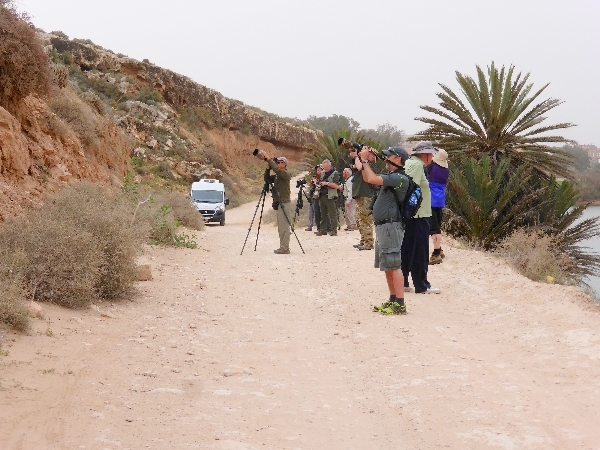 We also had some good sightings on and near the river, with a group of Night Herons, several Purple Herons, Little Grebes, Grey Heron, Little Egret. Also Greenshank, Common Sandpiper and Redshank.

Once we arrived at the reserve entrance the track is much higher giving great views over the river, we walked due west with the sun behind us, the light was great. We added Turtle Dove, Eurasian Linnet, Black-eared Wheatear and our main target bird, the Black-crowned Tchagra, this bird did not show for long but we all saw it. 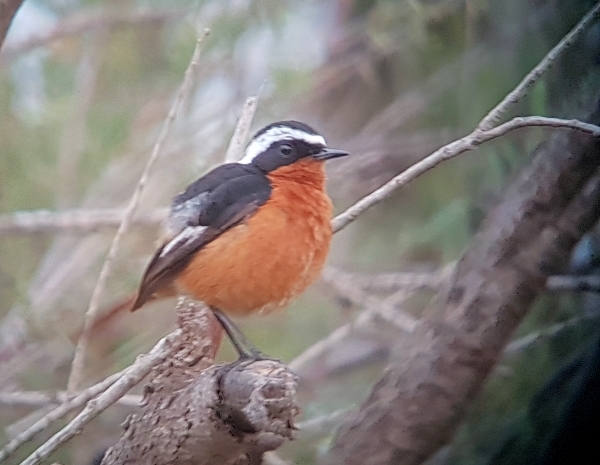 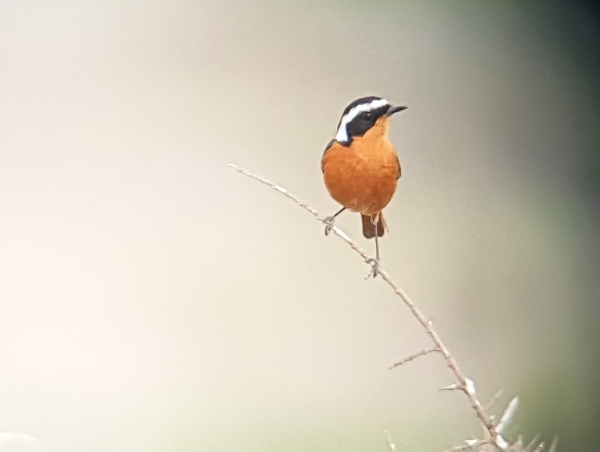 Not too many birds were on the river but we enjoyed Eurasian Spoonbill, Great & White-breasted Cormorant, Osprey, a fly over flock of Glossy Ibis and both Caspian and Gull-billed Terns quartered the river. We walked most of the track and stopped at a viewing area where we could scope open muddy areas that were exposed during this low-tide period. A number of wader species were counted there: Ringed Plover, Grey Plover, Greenshank and Redshank. Another great find was that of a Water Rail on the opposite bank on the edge of a reed-bed. 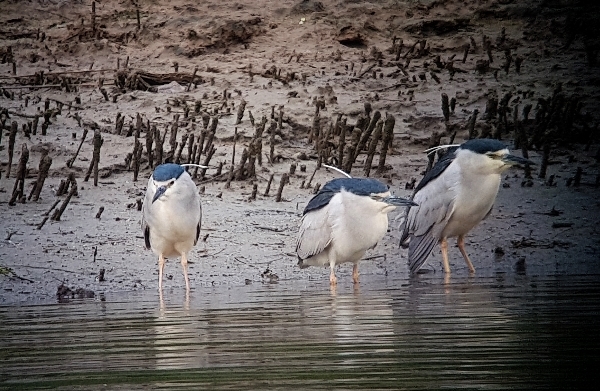 some of the Black-crowned Night Herons

We saw a few more species on the river and shoreline but the main sighting was of another Black-crowned Tchagra, this one showed much better.

Moving on we scoped the beach area where a gull roost held many birds. We picked some  Sanderling, a Gey Plover and a host of gulls and terns were loafing on a sand-bar in the roost. We looked for our first Audouin’s Gull without success but we did see both Caspian and Sandwich Terns standing near the gulls. 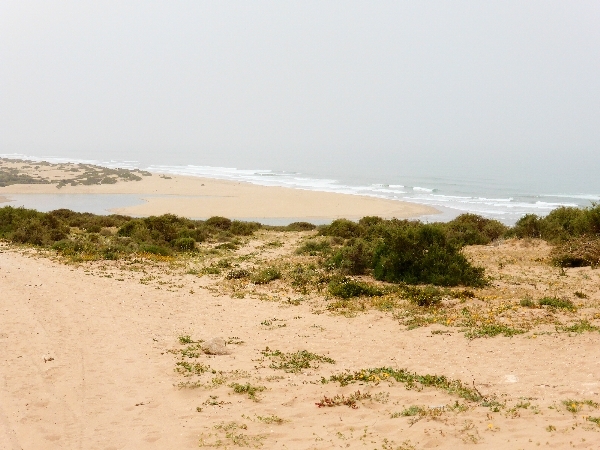 A few butterflies were on the wing, we listed: Painted Lady, Greenish Black-Tip, Lang's Short-tailed Blue and both Large and Small Whites.

We then walked up to a village and into a hotel restaurant where we had lunch out on the terrace watching Spotless Starlings and Common Kestrels, we also listed Stone Curlew on the way up.

From there we drove back into the village and down to the river, parking the bus by a bridge we got out for a walk. From the bridge we saw; Grey Heron, Night Heron, Common Moorhen, Reed Warbler, Yellow Wagtail, Common Sandpiper and White Wagtail.

We also saw a Laughing Dove perched in a nearby tree and whilst watching the dove one of the group picked out a Wryneck. Further scrutiny of the same tree produced a few more brief sightings of the Wryneck so mthat all group got to see it. We also found a singing Olivaceous Warbler, lots of Serins, Linnets, House Sparrows, Crested Larks and a few Cattle Egrets. Another group of 9 Glossy Ibis flew over and we located two Turtle Doves before we left the area. On the way out of the village of Massa we found a Little Owl on a dry-stone wall, the bird showed really well and posed for our cameras.

Driving back to Agadir we arrived around 3:30pm and after a short break at the hotel we left to visit Oued Sous for a second visit. This time we walked down river to the sea and to a fresh water pool hidden in the heathland. The pool held lots of birds with dozens of Pied Avocets, Greater Flamingos, Eurasian Spoonbills, both Ruddy and Common Shelduck, Northern Shoveler, Eurasian Teal and a great find was of five Marbled Ducks. 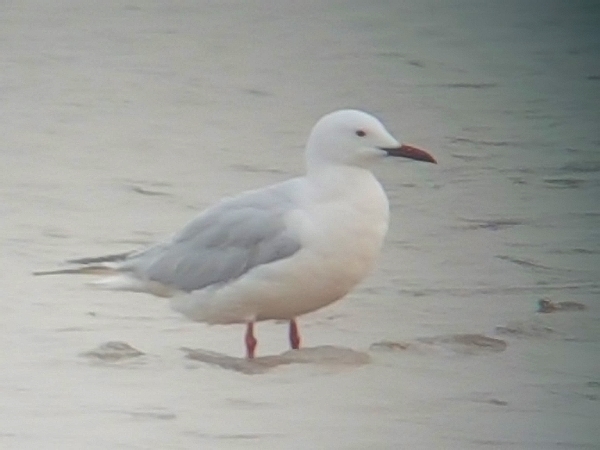 one of my favourite gulls - what a beauty. Slender-billed Gull

The estuary itself held all the same birds as yesterday except that today we had much better views of Slender-billed Gulls, Little Gull, Osprey, Marsh Harrier and dozens of other wader species. It really is a wonderful place to visit if you like wader watching and who doesn’t?

At 7pm we left and returned to the hotel, dinner was at 8pm, a delicious fish dish. During the courses we went through the bird log, we had added 8 new species to our list today, which now stands at, 181.

Tomorrow we travel north along the coast to Essaouira for our last night!