DRIVE FROM CHEPSTOW TO LYNFORD ARBORETUM AND TITCHWELL RSPB RESERVE

Our long awaited trip to Norfolk and Scotland had finally arrived and what a wet and miserable start it was!!  Guy Campbell and I drove to Chepstow last night and stayed at Nigel Bleaken’s house in preparation for an early start today this morning.

It was pouring with rain as we set out at 6:30am the visibility on the motorway was horrendous but got better as the miles flew by. We arrived in one piece at Atherstone near Birmingham to collect Mervyn and Leesa at 8:30am.

Along the way (once the rain had ceased and visibility improved) we saw Red Kites, Buzzard, Lapwing, Fieldfare, Kestrel, Jay, Magpie, Crow and Pheasant.

We were supposed to stop off to look for a ‘Red-head’ Smew but Mervyn our navigator missed the turning because he was using a map from the Victorian era and of course the motorways had changed a little since then, dipstick!

The actual birding began at Lynford Arboretum and what a great place for birding that is! From the car park we walked towards the ‘paddock’ where Hawfinches are the main attraction. We only walked a few yards when Mervyn called a Brambling! We watched a secluded cleared area where someone had obviously been throwing seeds down for the birds and within a few minutes dozens of birds came down to feed. 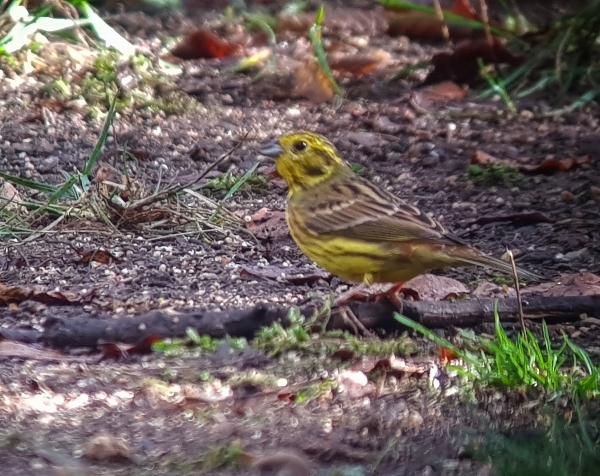 Yellowhammers (4), Bramblings (15+), Chaffinches, Robins, Blackbirds and Dunnocks all came down to feed. In the trees around us we found Nuthatch, Blue and Great Tit, Redwing and Fieldfares. As we walked down the main track to the ‘Paddock’ we noted Marsh and Coal Tits and a lot more Redwings, a couple of Goldcrest and also a couple of Song Thrushes. 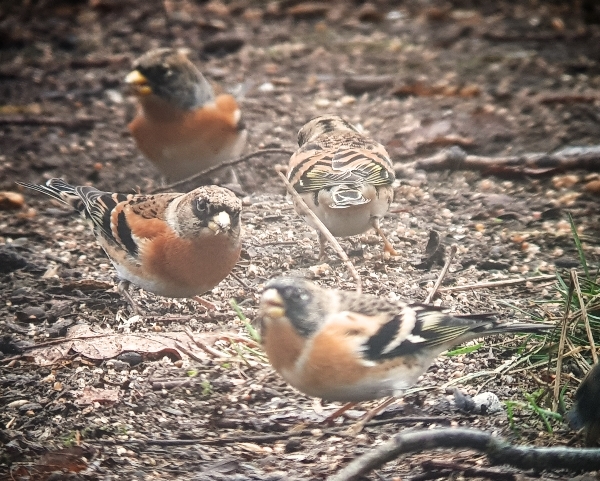 Brambling seen with Chaffinches and Yellowhammers 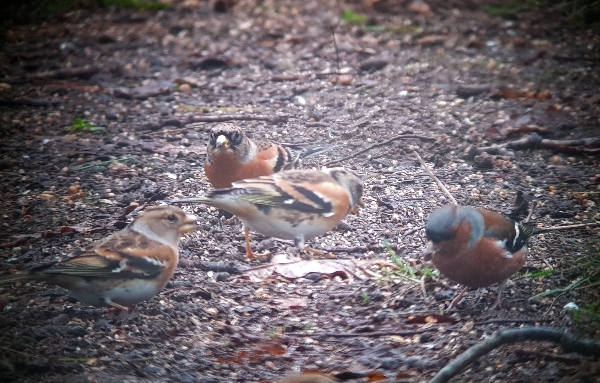 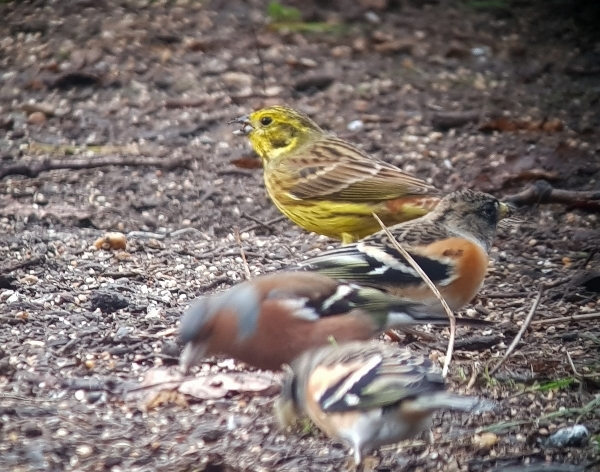 Within minutes of arriving at the designated site we found at least 10 HAWFINCES, they were a little distant but very scope-able, shazam, our instant bird of the day. In the same area Meryn found two Mistle Thrushes, Leesa found our first Greenfinch and Guy just drooled over the Hawfinches. 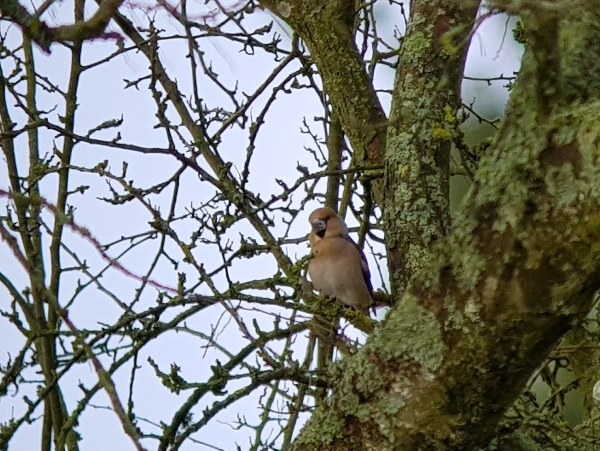 Hawfinches in the paddock at Lynford Arboretum 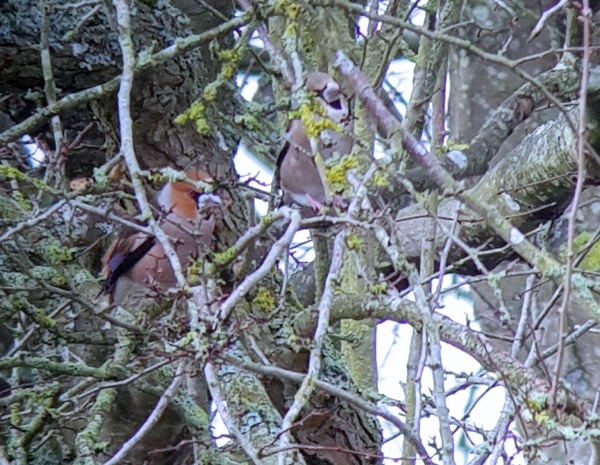 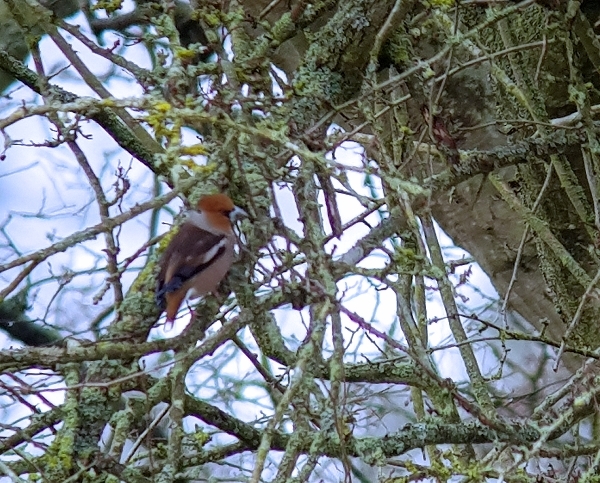 On the way back we found our first Long-tailed Tits, a Siskin and an Egyptian Goose flew over usWe then watched the Bramblings a little longer. At the car we spent time eating our picnic lunch before moving on. 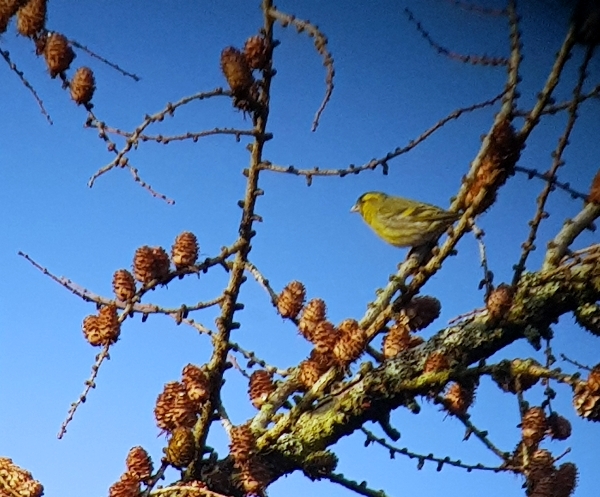 It took just over an hour to get to Titchwell from Lynford along the way we saw three more Red Kites, a single Grey Partridge, three or four Red-legged Partridges, another Kestrel and lots of Common Gulls in the fields. Muntjac Deer were also seen on a couple of occasions.

It was quite windy at Titchwell and with the temperature now at 2C it felt quite cold in the wind. We wrapped up warm and headed down towards the beach along the main track our first bird was a very close Water Rail seen in the ditch alongside the track. 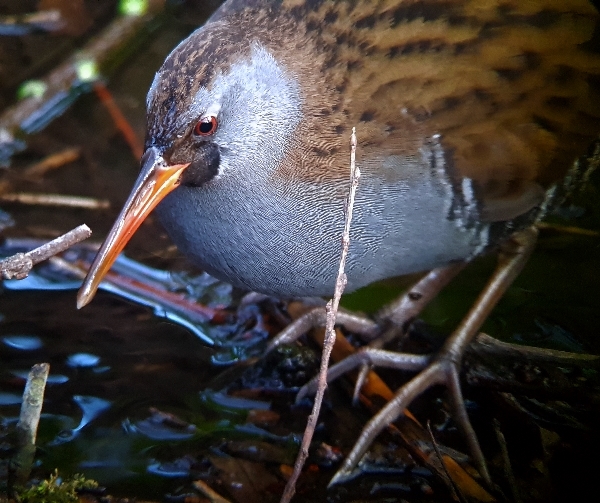 this Water Rail was too close to digiscope properly 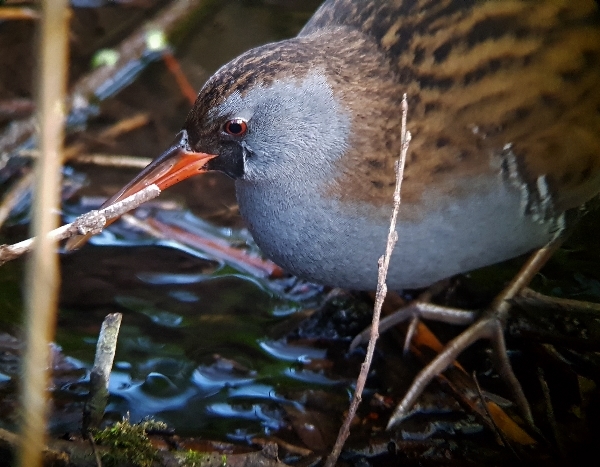 We went onto to see 11 species of waders, lots of ducks, geese and other waterfowl. The highlights included the sighting of a Spotted Redshank, a Barnacle Goose, Pintail and all the waders and other ducks.

I love walking down the beach at Titchwell and scanning the shoreline before raising the scope to view the sea. The wind was in our backs and so wasn’t so unpleasant, we enjoyed 30 minutes down there. The waders on the beach included Bar-tailed Godwits, Knot, Curlew, Oystercatcher, Dunlin, Turnstone and Sanderling. On the sea we saw a single Wigeon and Mervyn found a first year male Common Scoter. 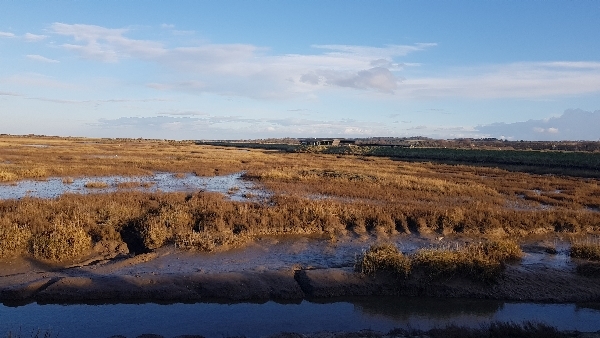 the marsh at Titchwell

The light was beginning to fade as we walked back, the sky cleared and a beautiful sunset lit up the western sky. The Marsh Harrier roost can be quite a spectacle at Titchweel so we waited around to see it. 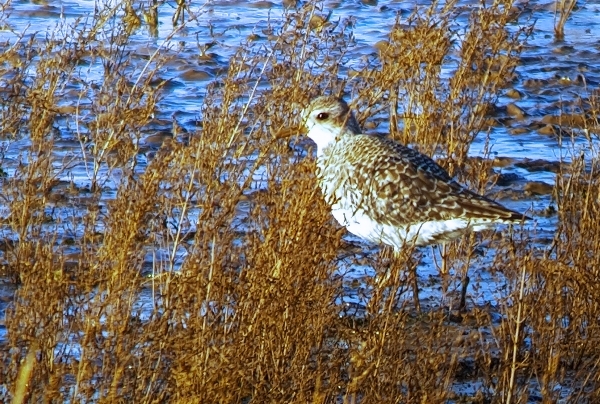 Grey Plover (I know it looks like a Golden Plover in this picture but its not!!)

It was disappointing today, with only about a dozen birds appearing, what was more interesting was a large flock of Golden Plover coming into roost on the reserve. It was almost dark as we got back to the car, it had been a thoroughly enjoyable day despite the wet and windy start. 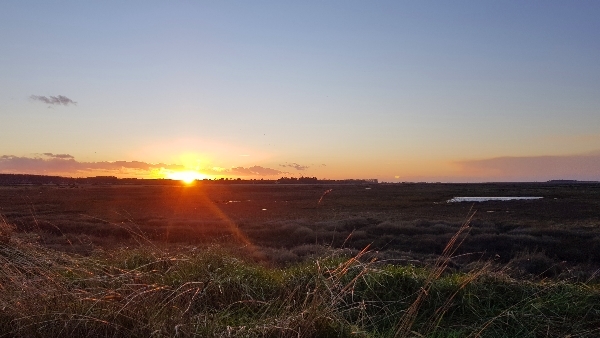