We met at 6am in the dark, it was cold, wet and very overcast, not quite what we expected according to the forecast! However we continued to the ‘Bustard’ reserve near Castro Verde taking the entrance at Guerreiro. It was just getting light as we got there having travelled for 45 minutes and seeing few species. We stopped to watch a group of three Hares and we saw Carrion Crow, White Stork, Common Buzzard and lots of Iberian Magpies. all seen along the narrow roads. As soon as we got to the reserve we saw Iberian Grey Shrike and Red-legged Partridge. 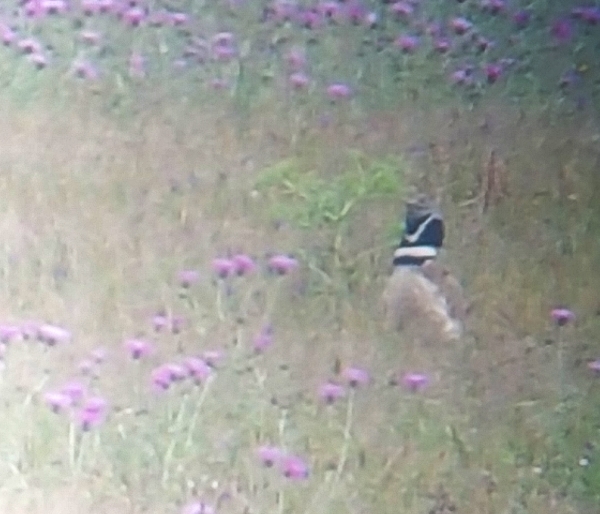 The rain stopped and the light improved a little as we drove onto the reserve we immediately found a Little Bustard, this fine male was calling but not displaying we had great views of it my group were thrilled to bits. Over the next hour we ventured further into the reserve, the landscape consisted of rolling hills of grassland as far as the eye could see in all directions, The array of colour became apparent as it got much lighter, we were looking at the biggest wild flower meadow in Europe it was truly amazing. 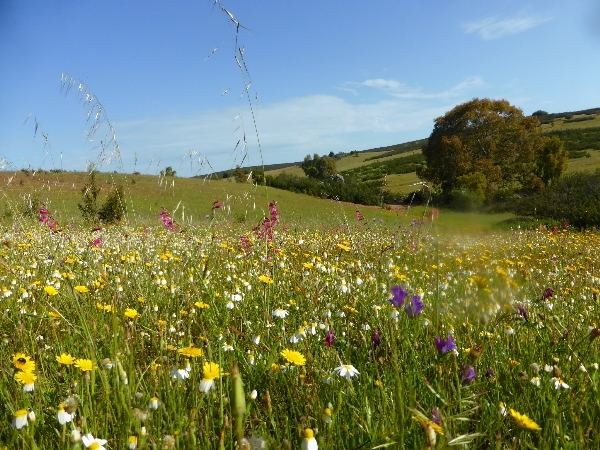 the frlowers taken later in the day

The grass was fairly high throughout the reserve, we could see Great Bustards dotted all over the plains in groups of two’s and three’s but not much else. Some of the Great Bustard were fairly close, we had much better views that yesterday but there was no sign of sandgrouse or more Little Bustards. We found many larks and Corn Buntings, the population of these species must be astronomical, they were everywhere especially Calandra Larks, Crested and Thekla Larks. We saw several Greater Short-toed Larks because they landed on the track ahead of the bus, lots of Common Quail were calling but as usual we had no sightings of them. 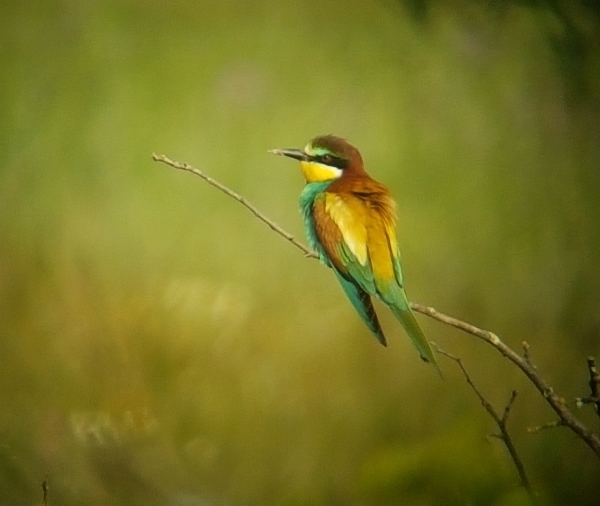 At the exit Gate we again watched Little Bustards, this time two or three were flying around chasing one another and also calling from the grass fields. It was 9am when we finally left the reserve, we parked near the village of Guerreiro and ate our picnic-breakfast whilst watching Iberian Magpies, Iberian Grey Shrikes and lots of larks, a Marsh harrier flew over. Making our way back towards Castro Verde we stopped many times, the weather improved and the sun came out this brought out even more species especially Montagu’s Harriers. At one point 5 male Montagu’s Harriers were visible at the same time, we pulled over near a stream where some scrub was growing, we found European Bee-eaters, Eurasian Hoopoes, Cattle Egrets, iberian Magpies and some beautiful Red-rumped Swallows. 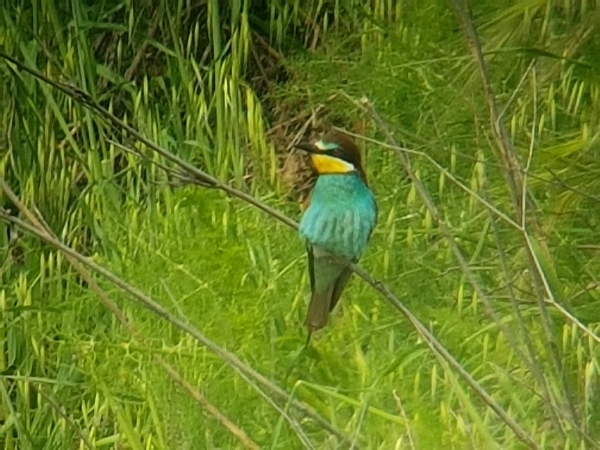 We made our way into Castro Verde where we stopped for coffee and on the way back south we pulled over and stopped near a farm track which ran alongside a small river. The place was alive with bird song, mainly Common Nightingale but also Cetti’s Warbler and Sardinian Warbler, Bee-eaters were calling too.

We walked about 1km before turning back, a Short-toed Eagle was our next new species, it circled over the farmland and disappeared over a hill, we had good views of it. Just as we were leaving we spotted a Rufous Bush Robin which in fact was our target species. With patience we all got great views of it as it moved from song-perch to song-perch, what a great find. 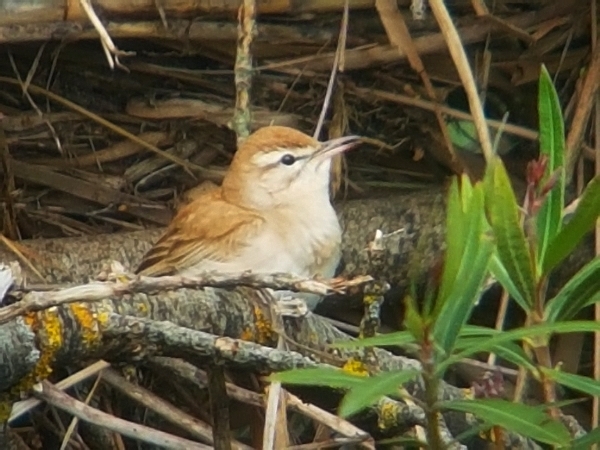 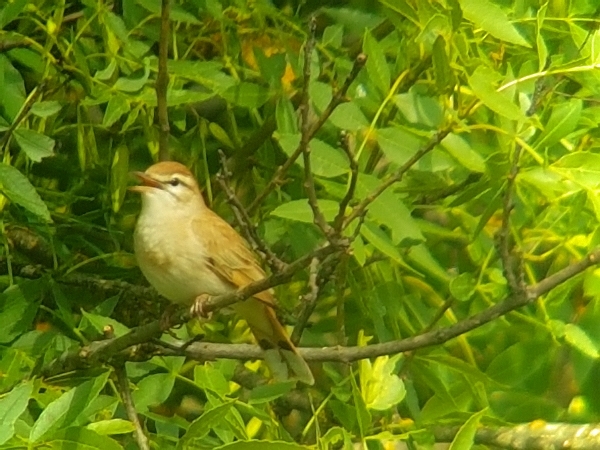 Next we drove to the Pula da Lobo (‘Jump of the wolf’) a very popular tourist spot where a steep rocky gorge has a cascading river flowing through it. The rock formation is quite a spectacle and many birds enjoy the gorge too. We drove through oak woods and open ‘Dehesa’ hoping for a view of Black-winged Kite which never happened. 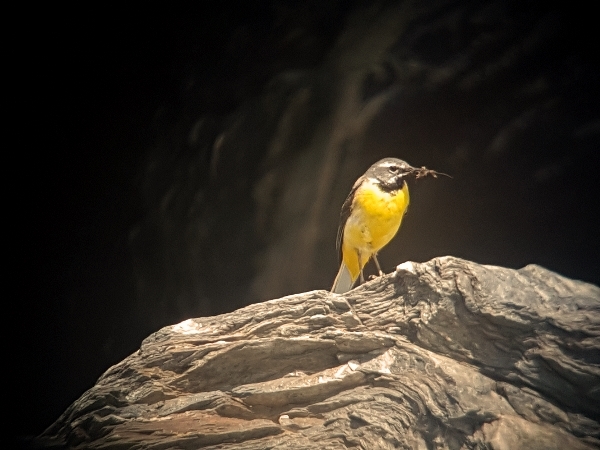 We did see Golden Oriole, Serin, Blue Tit (our first), Sardinian Warbler and Iberian Magpies on the way down. In the gorge we were hoping for a sighting of White-rumped Swift but instead we saw lots of Crag & House Martins, Barn & Red-rumped Swallows and White & Grey Wagtails. We scanned the sky for swifts without seeing a single one, we did pick up a Griffon Vutlure and a distant Bonelli’s Eagle but not much else. After we had consumed our picnic lunch we drove off back towards Mertola. 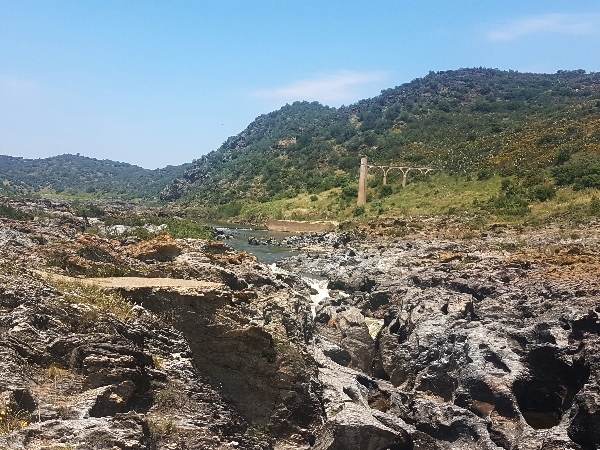 No far out of Mertola to the east lies an area of heathland where Spectacled Warblers are known to breed, this is a rare breeding species for Portugal. It was a little windy when we got there and after sveral stops and short walks we gave up without seeing one. Plenty of Common Stonechats, Woodchat & Iberian Grey Shrikes but no warblers.

We got back early to the hotel around 5pm, it had been a very long day, so we chilled until 7pm when we went out to dinner.