TRANSFER FROM FUENDETODOS TO HECHO VALLEY, PYRENEES – WITH STOPS AT EL PLANERON NEAR BELCHITE – RIO EBRO NEAR QUINTO – LOS MONEGROS

WEATHER: A very windy day with heavy cloud cover to start and a clear sky later.

I hate the wind as much as the rain you can’t watch birds very well in strong winds which is exactly what we had all day. We met up at 7am in the hotel foyer and went for a short walk behind the hotel grounds, the clouds above us looked menacing and threatened rain but clearer weather could be seen in the east.

A small number of Serins, Greenfinches, Chaffinches and Goldfinches were listed as we walked along a lane which took us past an ornamental pond filled with dodgey ducks, a Greylag Goose and both Mute & Black Swans.

We located a Melodious Warbler from its persistent song and logged Spotless Starling, Common Swift and a very obliging Cirl Bunting. But, the best sightings were made of Golden Orioles, we watched one particular male feeding in the grass, it perched in dead branches, it hovered over the grass and later we saw another male catch a Praying Mantis, it sat out on the ground in full view whilst it dealt with the mantis, marvellous birding. 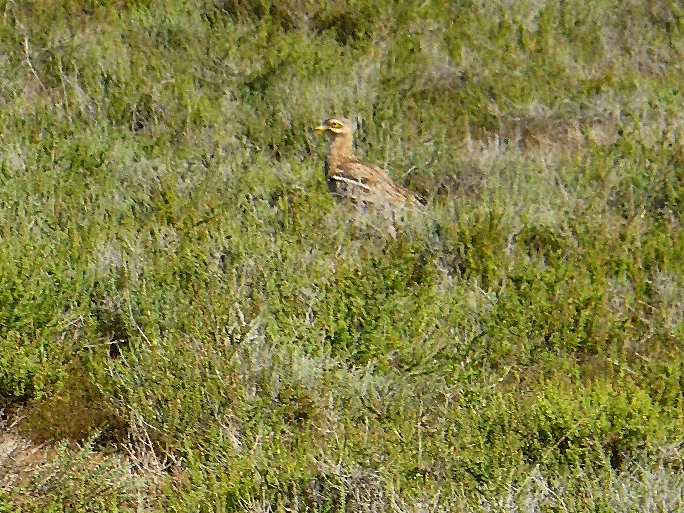 One of the Stone Curlews seen today

After breakfast we checked out of the hotel and set off for the Pseudo Steppe at El Planeron near Belchite. The wind had got up but the clouds had cleared. We then spent a couple of hours scouring the open steppe landscape of El Planeron with only short excursions out of the bus because the wind was so bad. We ended up with a fairly good list but it could have been much better had it not been for the wind. 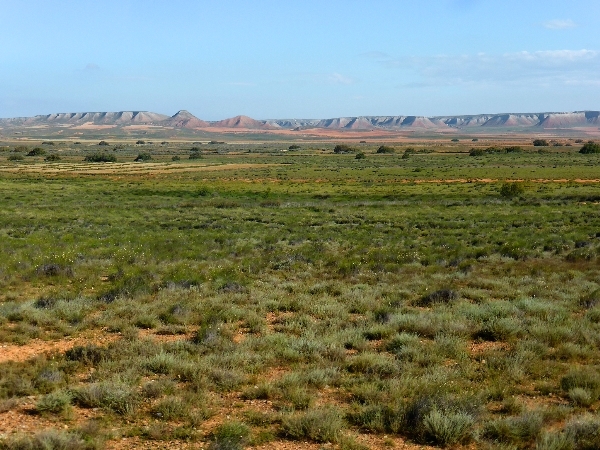 Larks were everywhere, we got good views of Crested, Calandra and Short-toed but only glimpses or distant views of Lesser Short-toed and Skylarks. A fair amount of  Raptors flew around the steppe,we listed lots of Griffon Vultures, also plenty of Black Kites, Common Buzzards, singles of Booted & Short-toed Eagles, Marsh and Montagu’s Harriers (the latter seen only by two of us). 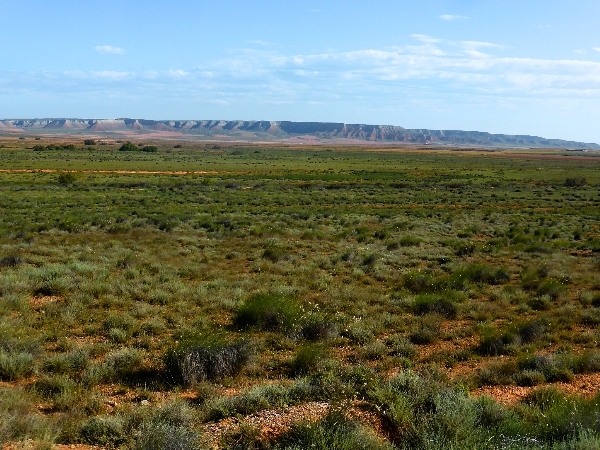 The highlight of our visit was leaving! This was solely because of the very strong winds. We did see a single Black-bellied Sandgrouse in flight which turned in the wind and dropped behind a ridge, probably our best find, although the Stone Curlew was pretty good too.

Driving down to Quinto we noted White Stork, Common Buzzard, Marsh Harrier and Cattle Egret before we turned off onto a track that led us to the River Ebro. The river was very high and was also bursting its banks, the windy conditions didn’t help us find many birds. During our first stop we did see a large number of Sand Martins, a single Grey Heron, many Common Swifts and one person watched an Alpine Swift. 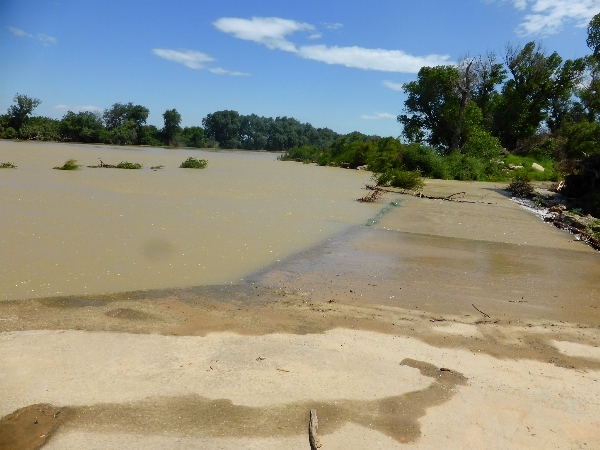 The Rio Ebro almost bursting its banks - we normally walk across this ford but we couldn't go near it today!

The second stop produced Reed Warbler, Common Cuckoo and we heard both Common Nightingale and Cetti’s Warbler. Our third and final stop along the river produced White Wagtail, Serin, Cetti Warbler views and not much else.

Lunch was taken in the centre of the town called Pinar del Rey, we ate our picnic in the middle of the main plaza whilst watching White Storks, Black Kites, Booted Eagles and some of us saw a Eurasian Sparrowhawk just before we left.

Los Monegros lies just east of Zaragoza and consists of rolling hills covered in low scrub and is ideal for several species such as Black-eared Wheatear, Spectacled and Dartford Warblers and unexpectedly Golden Eagle. 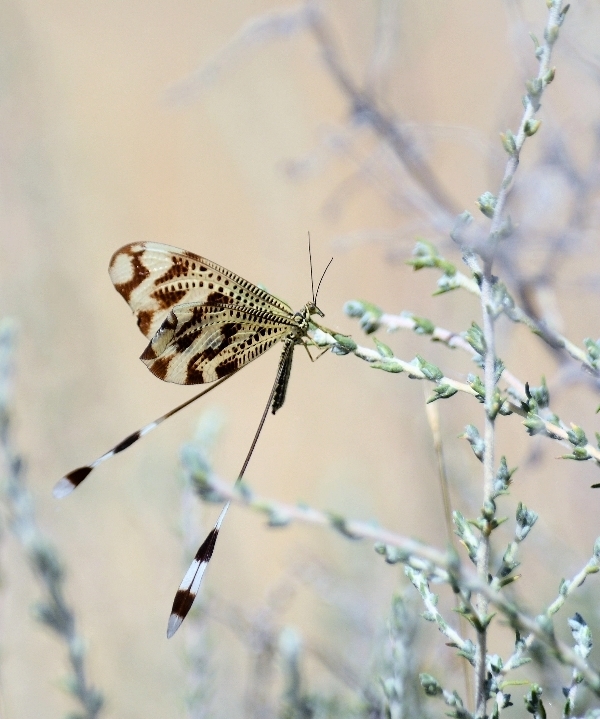 We braved the strong winds to scour the heathland, we did find a few Black-eared Wheatears, some Crested Larks, Jackdaws, Red-billed Chough, a single Hoopoe, some European Bee-eaters and lots of Black kites. Just before we left the area we found two Golden Eagles, but they were only short views of them.

At 4pm we left Los Monegros and headed for the Hecho Valley in the Pyrenees, we had a clear blue sky all the way, the scenery was magical, but the bus was buffeted by the strong winds as we made our way passed Huesca.

Half a dozen Red Kites were seen along the way as well as a single Purple Heron and a couple of Common Buzzards. I saw the only Red-backed Shrike of the trip. We arrived at Hotel Uson around 6:30pm giving us plenty of time to settle into our rooms and get ready for dinner at. 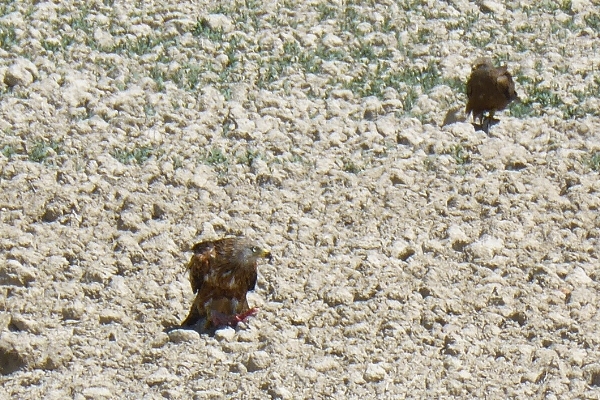 Black Kites at Los Monegros - the nearer bird has food and the other wants some of it!

We tasted the home-made beer from the hotel’s very own Micro-Brewery as we sat down to a delicious dinner, served as usual by Lucia and Imanol, our most welcoming hosts and owners of the hotel. The wind had finally abated by the time we had finished dinner. Tomorrow we explore the Hecho Valley and the weather forecast is good.