A small nature reserve is managed at Cattcott by the wildlife trust, it consists mainly of a flooded meadow with a section of woodland. It can be reached from our guest house in about 8 minutes by car and this is where we started our birding today.

We arrived just after 8am after stopping to watch a small number of Roe Deer in a small paddock, the light wasn't good, but the sun tried very hard to provide more light by piercing the cloud base above us.

The flooded area was mainly frozen over so the majority of the wildfowl were clustered together on the little pockets of unfrozen water. A lot more Pintail were seen with the usual crowd of Teal, Wigeon, Shoveler, Gadwall, Mallard and Common Pochard. Mute Swans, a Marsh Harrier and a few Lapwing made up the rest of the species.

We left after a short while, our destination was the 'new' WWT reserve at Steart Marshes and the NNR at Steart Point both of which promised a good list of species.

It was Steart Point that we headed for first, we arrived at the car park at 9:30 and from the car park we scanned the nearest field where dozens of Lapwing could be seen and with them we saw several Eurasian Curlews, Common Redshank, Stock Doves and  large flocks of Starlings.

We then set off towards the point along the shoreline noting our first Greenfinches on a garden feeder, also Common Stonechat, Robin and Dunnock. The track led us to the shoreline but the visibility looking out to sea was very poor. Over the next hour we walked to Steart Point, the light improved and we were able to scan the shore.

With high tide a couple of hours ahead of us there was a large expanse of exposed mud-flats between the shore and the tide-line, we could see dozens of Eurasian Curlew, Common Shelduck, Common Redshank and flocks of Dunlin feeding out there. Other species noted were: Eurasian Skylark, Eurasian Linnet and not much else.

From the hides at the Point we added several more species to our list: a Peregrine Falcon sat on the beach, scores of Grey Plover were dotted all over as were thousands of Dunlin. A small group of Red Knot fed in a pool whilst Pied Avocet, Brent Geese, Canada Geese and a single Red-breasted Merganser were noted along the river Parrott.

After an hour or so sitting in various hides we made our way back to the bus along a different route, we found several Golden Plover with a large flock of Lapwings in one field whilst over 20 Eurasian Curlews fed in another.

Next we drove back inland a couple of kilometers to the new Steart Marshes Wildfowl and Wetlands Reserve and after eating our lunch in the car park we took to the new trail system on the reserve. Brand new hides and large viewing 'blinds' are dotted all over a very large expanse of marshland, several large pools are found along with tidal mudflats, reedbeds and wild-flower meadows.

As this area develops I'm sure it will become a great place to visit that attracts thousands of birds, today there seemed to be more people than birds! Nevertheless, it was enjoyable and hides were comfortable. 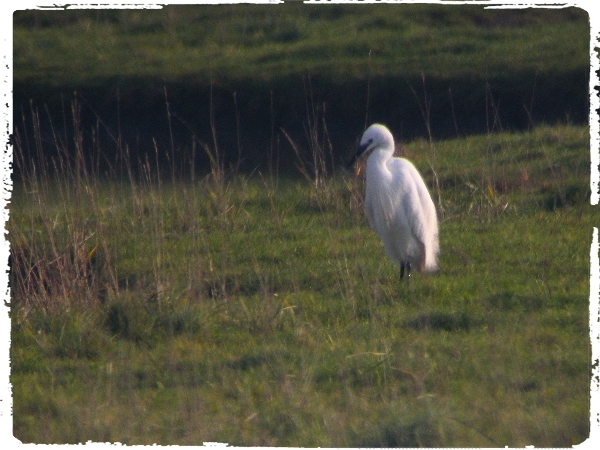 The cloud cover lifted and the light improved around 2pm. We added Black-tailed Godwit, Eurasian Sparrowhawk and Common Pheasant to the list and as we walked from hide to hide we found Meadow Pipits, Redwings, Song Thrushes, more Linnets and a single Yellowhammer.

At 3pm we decided to drive back towards Steart Point to look for Short-eared Owl. Parking in the first car park we walked to an area where rough pasture looked just right for hunting SEO's.

But first, from a raised bank we scanned over another section of tidal marsh where we had good views of Black-tailed Godwit, Pied Avocet and we found our first and only Spotted Redshank.

As the light began to fade around 4pm we walked along a track towards the rough pastures and within minutes we found a Short-eared Owl! What a beauty, we enjoyed watching this fascinating day-flying owl as it quartered the raised bank and open fields, an amazing bird to finish off our day's birding. 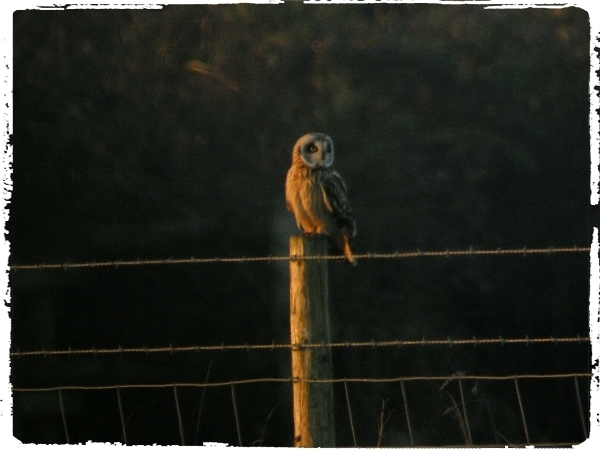 It took an hour to get back to our warm guest house where our very obliging host always had hot tea or coffee ready for 8when we got back.