WEATHER; dull and overcast for most of the day, light rain with heavy showers and quite windy. Top temp 17C

We knew the weather was going to change today and so we prepared for it, rain was forecast from around 10am and that is what we got. Before breakfast we drove to the edge of town to the Puente del Ajoli where we walked in the dark towards the National park entrance. From a second bridge we staked out an area where Iberian Lynx had been spotted recently and waited in silence.

We were joined by a number of mosquitos but not many and the only background noise consisted of singing birds, especially Nightingales, dozens of them! As it got light our expectations grew, the excitement was almost tangible. However, it was not be, we never had a sniff of a Lynx and had to call it day  ½ hour after first light.

As we walked back to the bus hundreds of Glossy Ibis flew over us, also Cattle, Little and the odd Great Egret. We saw Night Herons flying in the opposite direction and Black Kites were also on the wing looking for an early breakfast.

After our breakfast we set off for the huge marshes at Huelva, where the Rio Tinto (Colombus allegedly sailed from there in 1492) and the Rio O'diel meet and flow into the Atlantic Ocean.  But, first we stopped at the cliffs at Matalascañas to watch for bird movement over the ocean. We saw a few Northern Gannets, lots of Sandwich Terns, a trickle of gulls, mainly Yellow-legged but also Lesser Black-backed and a few Sanderling on the beach below us. We watched a Hoopoe from the bus as we pulled away a short time later, it was windy on the cliffs but still dry. 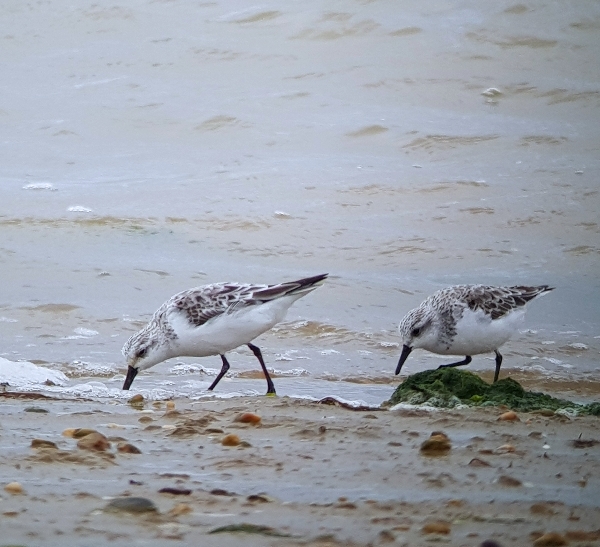 By the time we arrived at the Marismas O’Diel it was raining, a light drizzle with a fairly strong breeze, not good for birding. Our first stop was at the Laguna Grande opposite the salt pans, many birds were roosting during high tide, we scoped the water from the roadside. Dozens of Black-winged Stilts were joined by a few Black-tailed Godwits, a couple of Greenshanks, a single Dunlin and a Common Sandpiper. Also on view was Greater Flamingo, Common Shelduck, Gadwall, Common and Red-crested Pochard, Mallard, Eurasian Coot, Moorhen, Little Grebe, Eurasian Spoonbill and Eurasian Teal. Some of us walked across the road to view the salt pans but were called back by Mike who had found a Jack Snipe in the scrub!! Jack Snipe is a very noteworthy species and I think my first for Spain, well done Mike. 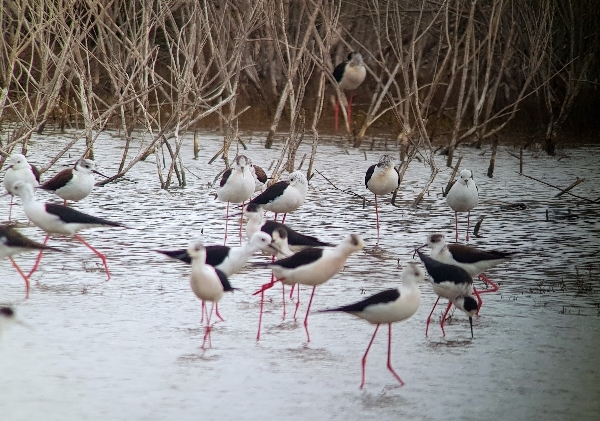 Black-winged Stilts - all legs and bills

The salt pans held lots more Greater Flamingos and dozens of roosting gulls, we added Ruddy Turnstone to the day list and not much else. At the visitor’s centre we noted a very approachable Whimbrel and we used the facilities before moving on. 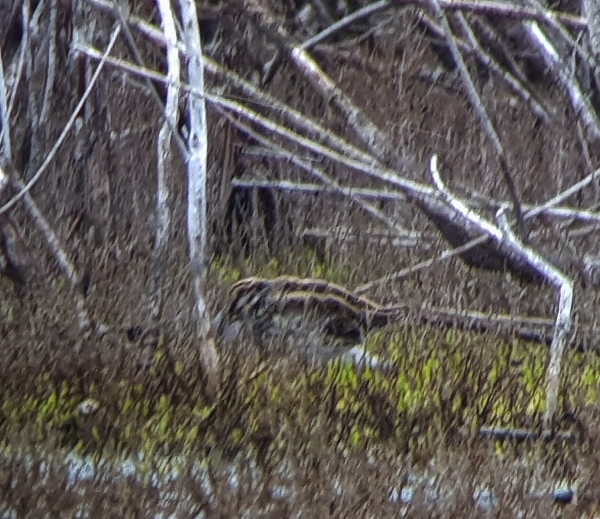 my record shot of the Jack Snipe found by Mike Hails

The wind and rain increased in intensity as the morning progressed, we made many stops as we made our way along the narrow strip of land through the marshes. We watched flocks of Dunlin, Sanderling, Curlew Sandpipers, Grey Plover, Greater Ringed Plover, Redshank, Greenshank, Whimbrel, Ruddy Turnstone and we noted that the three Osprey nest platforms were all occupied, with a sitting adult and another in close proximity to one of the nests. 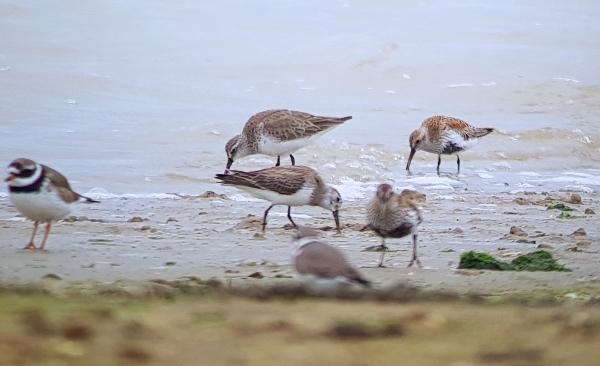 No passerines were noted except for Crested Larks and Woodchat Shrikes, a quick look from a beach area produced sightings of Sanderling and Ruddy Turstone, Sandwich and Little Terns and a few YL Gulls. The weather deteriorated, so we abandoned our excursion. After driving into town to collect picnic supplies from a supermarket we headed for El Portil, the sky brightened and the rain stopped for a while, at the Launga de El Portil we ate our picnic and watched a few birds on the water, nothing new or of great note appeared except for a Cetti’s Warbler which flew around below us in the scrub.

A coffee and toilet stop was made in El Portil before we continued to El Rompido, we drove through heavy rain but it stopped by the time we reached the river bank of the Rio Piedras, the tide had now turned and was receding. We had our best birding of the day there, we stood still by the side of the bus and watched many waders feeding just a few meters in front of us. It was magical to watch so many species at such close quarters: Bar-tailed Godwits, Dunlin, Sanderling, Greater Ringed Plover, Grey Plover, Whimbrel and Curlew Sandpiper all feeding very close to us. Most were in winter plumage but some were changing colour. 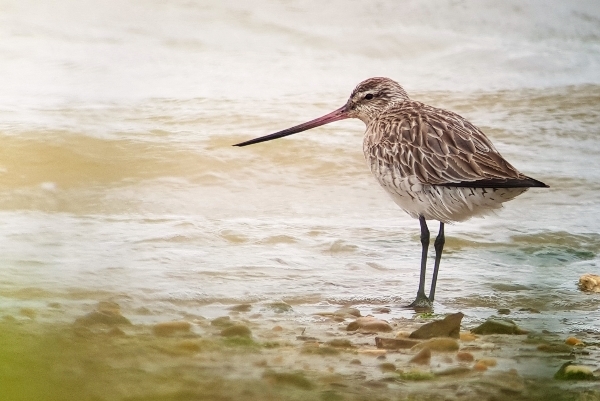 We also noted an Osprey perched on a post, our first Eurasian Curlew, some Sandwich and Little Terns, Common Sandpiper, Greenshank and we had fly-over Audouin’s Gull, Green Woodpecker and Mike spotted a Caspian Tern. Little and Great Egrets were also noted and Sardinian Warblers sang from the scrub, it was a most enjoyable time, but we had to leave and the recommencement of the rain was the cue to get going. 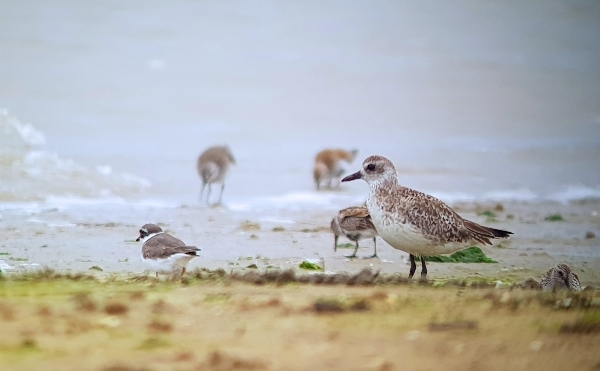 We made a second stop at the Laguna Grande del Marismas O’Diel to see if any new birds had arrived I was particularly interested to see more gulls roosting on the banks of the salt pans but we only added two Mediterranean Gulls to the list.

45 minutes later we were back in El Rocio scanning the laguna Madre de Marismas, the light wasn’t good and the bird numbers looked well down on yesterday’s total, but we enjoyed scanning the islands and the huge Coot flock for unusual species. All the regulars were still present, but far fewer Collared Pratincoles, Terns and ducks were seen. 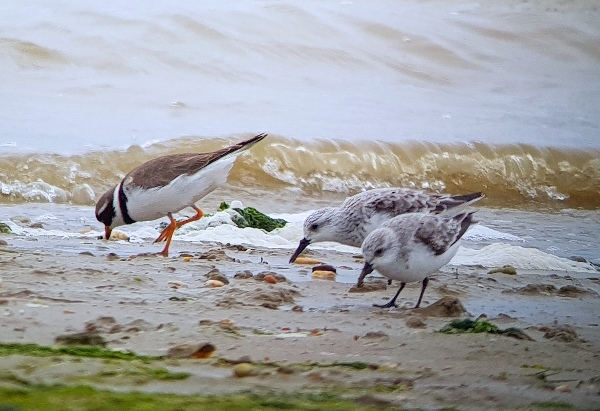 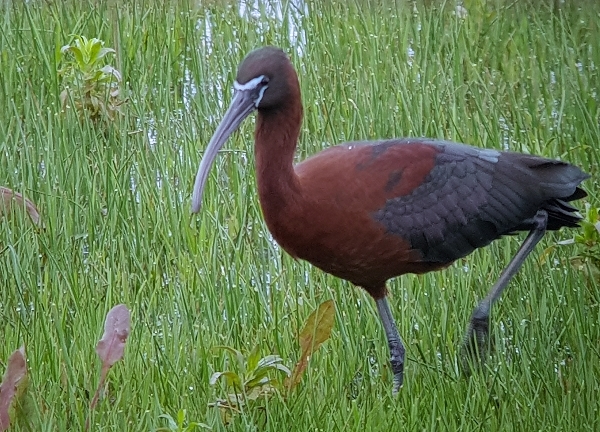 Glossy Ibis back at El Rocio

Bee-eaters dashed about behind us and Glossy Ibis fed fairly close, but things did not look the same with a dull grey sky instead of a bright blue one. The weather looks just as bad for tomorrow when we will be driving to the José Valverde Centre in the middle of the national park!