Oh boy, what a wet day and with two completely contrasting halves, the morning was fine with nice sunny weather whilst the afternoon, as forecast, was a complete wash-out!

As the laguna Madre de Marismas was just a short walk from our hotel we made a quick visit before breakfast, it got light around 7:45 so that is when we met. From the promenade we saw all the usual species looking great in the morning light, a bonus was the appearance and calling of a Little Bittern, we all got good views of both a male and a female. Also calling were Cetti’s Warbler, Great Reed and Reed Warblers, we got brief views of the latter. 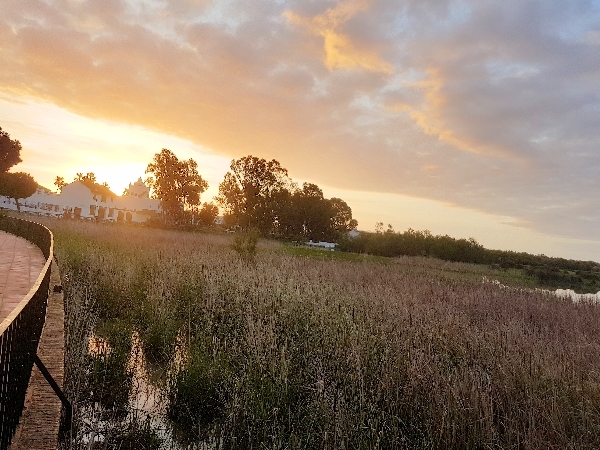 Sunrise over the reeds where we saw the Little Bittern

A male Garganey was nice to see along with Northern Shoveler, Gadwall, Red-crested and Common Pochard. Purple Swamphen, Glossy Ibis, Eurasian Spoonbill, Greater Flamingo and Black-winged Stilts made up most of our other sightings. 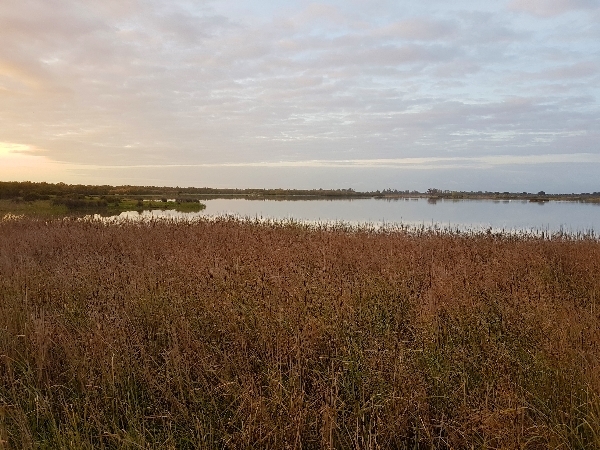 looking out over the Laguna from the promenade at El Rocio

After our breakfast we set out in the bus for the very short journey to La Rocina a section of the Donana natural park. Nearly 4km of boardwalks take you through Umbrella Pine woodland, some dense scrub (algaida) and to a number of hides overlooking the La Rocina stream, which today was a huge flooded area.

From the first hide we enjoyed views of Garden Warbler, Blackcap, also brief views of Reed Warbler and many water birds seen earlier. We heard a Savi’s Warbler but could not locate in the dense reed-beds.

As we walked towards the next hide we found a male LESSER SPOTTED WOODPECKER, Common Nightingale, more Garden Warblers and Blackcaps. Just before we walked onto another boardwalk, we found a pair of LESSER SPOTTED WOODPECKERS. The next section of the boardwalk overlooked another inlet of the stream, we heard another Savi’s Warbler but still could not see it. It started to rain, only lightly and whilst we sheltered we found Iberian Chiffchaff, Long-tailed Tit, Short-toed Treecreeper and both Cetti’s Warbler and Common Nightingale sang from all directions. 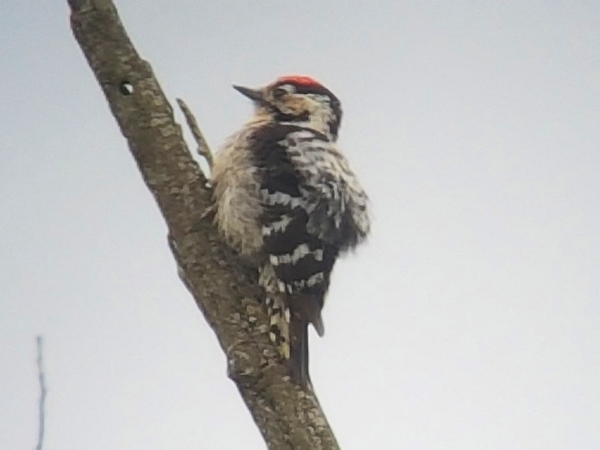 From the next hide a Savi’s Warbler called from very close quarters and it was Gerald who located it first, smashing we all had great scope views of it buzzing away.  Woodchat Shrike, Common Stonechat and even more Garden Warblers, Long-tailed Tits, Great Tit, Chaffinch, Serin and Common Nightingale were all seen outside of the second hide. 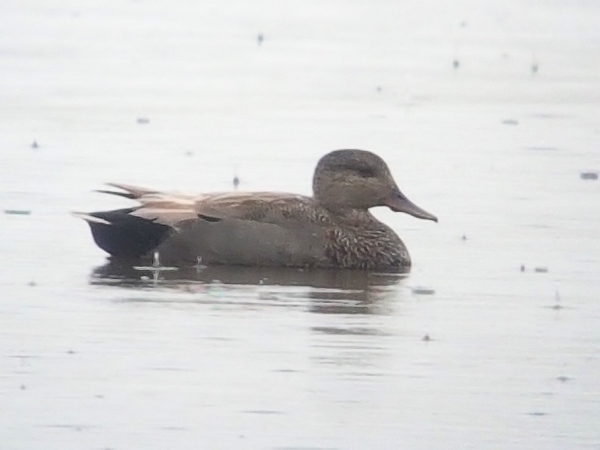 male Gadwall sitting in the rain 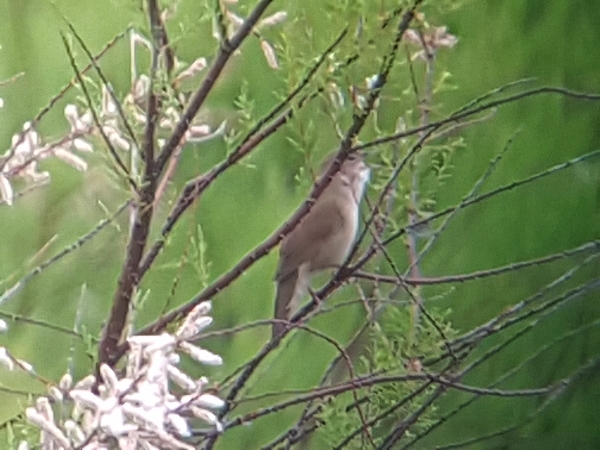 a poor record shot of the Savi's Warbler

We abandoned the longer walk because of the weather so we walked back to the bus and set off for the heathland which was found a couple of kilometers along the track to the Palicio de Acebron. We quickly found a pair of Common Stonechats, then a amle Dartford Warbler appeared but not everyone got good views of it. So we tracked it down as it flew across the road and perched up nicely a number of times, fantastic little bird. We also logged Iberian Shrike (formerly Southern Grey), a pair of Eurasian Hoopoes, a pair of Common Ravens and two Serins. 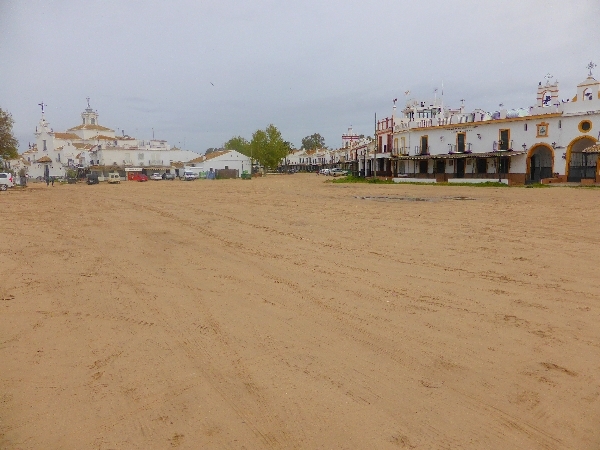 The streets in El Rocio are sand - no traffic noise!

The rain came down very hard as we drove towards the coast to the Acebuche Centre, we quickly walked from the car park into the visitor’s centre where we decided to take lunch. That was pretty much the end of our birding because the rain and wind had increased by a substantial quantity. Some of tried to bird from the nearest two hided but it was hopeless really. We saw Stonechat, Yellow Wagtail and a few water birds before we abandoned for the day. 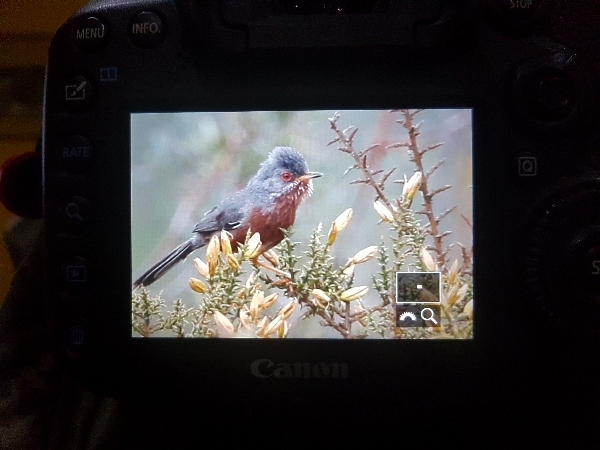 two shots of the back of Steve Zarate's camera after the Dartford Warbler had shown well. 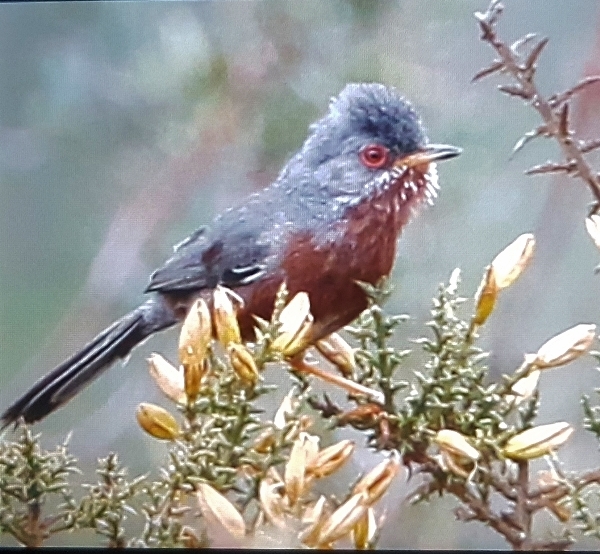 It was 3:30 when we arrived at the hotel and made plans for an early dinner, a couple of the group did go back out around 5pm and had good views of the Great Reed Warbler as well as a lot of the regular habitants of the laguna.