We said goodbye to Finca Santa Marta just after 8am, it was sad to leave, it may be my last visit there, we had had a wonderful stay as usual. But, onwards and upwards, we drove through Trujillo and on up to Monfragüe Park where we had an amazing 30 minutes of raptor watching. Along the way we finally notched a Turtle Dove (seen by 3 of us only), also many Black Kites, Booted Eagle and lots of Griffon Vultures. The usual Iberian and Eurasian Magpies dashed across the road and the obligatory Corn Buntings sat on the wires whilst kamikaze Crested Larks sat on the road. 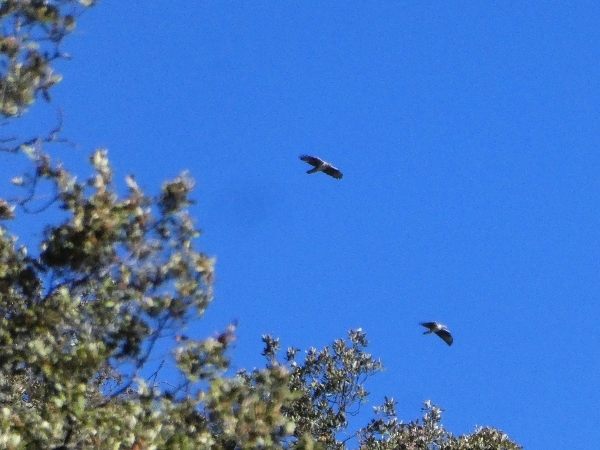 A PAIR OF BONELLI'S EAGLES SEEN IN MONFRAGUE NP. THIS MAKES FOUR SPECIES OF EAGLE IN 20 MINUTES

As we approached the Park we spotted a large Eagle drifting towards us, we stopped and checked it out, it was Golden Eagle, quite a good find for Monfragüe I can’t remember ever seeing one in or near the park before. After watching this magnificent bird for a while, a second, smaller eagle came up and joined it for a while. This second eagle was a Spanish Imperial Eagle, how about that, the birds did not interact but simple drifted off in different directions, amazing. We heard Woodlark singing as we got back into the bus. 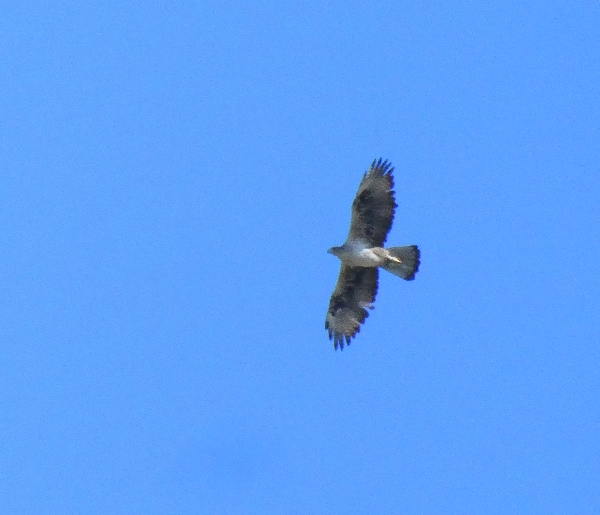 SLIGHTLY BETTER VIEW OF THE BONELLI'S EAGLE IN MONFRAGUE PARK

Our only planned stop in the park was near the main bridge in a pull-in where I have seen Bonelli’s Eagle in the past. Would you believe it, after 5 minutes of searching the sky above a ridge, two Bonelli’s Eagles drifted over the ridge and just held in the wind above us, the light was perfect for viewing. These birds hung around for 10 minutes or so, fantastic!!

After a short toilet stop in Villareal we set off for Plasencia, which lies west of the park, we notched up a Black-eared Wheatear along the way and just when we were discussing he possibility of seeing all 5 eagles in one day I noticed a Short-toed Eagle sitting on a pylon, unfortunately it was impossible to stop anywhere near as we were on a winding road leading out of the park, (so I saw all 5 eagles, but not my clients, its a shame). 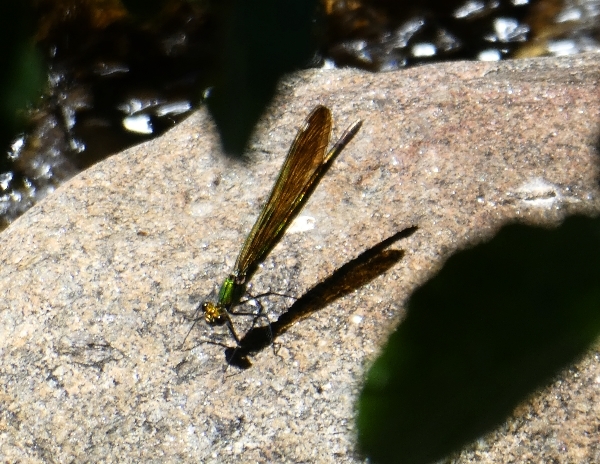 After passing through Plasencia we stopped to buy lunch before driving up the mountainside on the road to Hervas, we parked on a side rack near an oak woodland, it was very breezy up there. We ate our lunch and then chased a few butterflies before walking into the woodland. It was lovely habitat but we saw very few birds: Eurasian Nuthatch, Great Spotted Woodpecker, Blackcap, Common Nightingale, Serin and our first Robin. Some nice butterflies were on the wing,  Brimstone, Silver Washed Fritillary, Pearl Heath, Iolas Blue, Large Tortoiseshell and Wood White. 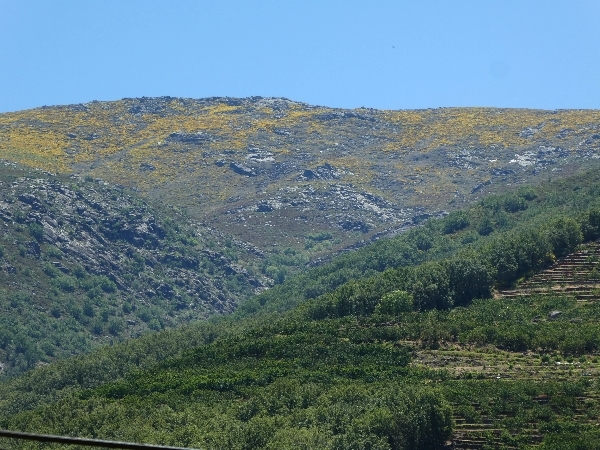 THE VIEW FROM THE HERVAS ROAD 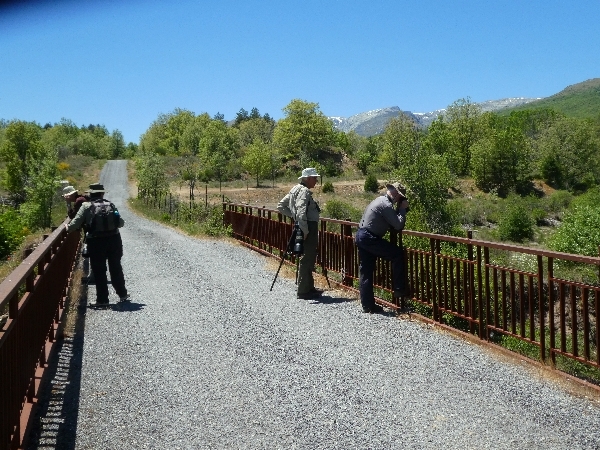 A quick stop at a Mirador at Hoyes del Espino produced a nice variety of species including our first Carrion Crows, Northern Wheatear and Rock Sparrow, we also saw Melodious Warbler, Common Whitethroat (at least 3 were singing from the wires), Black Redstart, Common Stonechat, some brightly coloured Linnets, Woodchat Shrike and Corn Buntings. 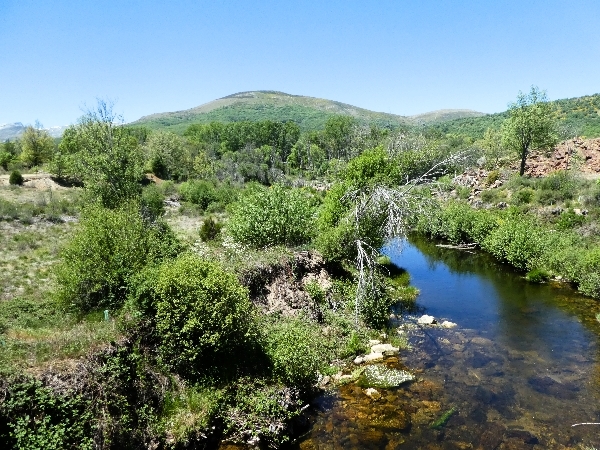 Just below Hoyes del Espino we parked by a cattle pasture, a small stream ran through it and that is where we saw our first Western Yellow Wagtail (iberiae), we also found Tree Sparrow, another Rock Sparrow, Eurasian Hoopoe, Black Redstart and more Carrion Crows than you shake a stick at. 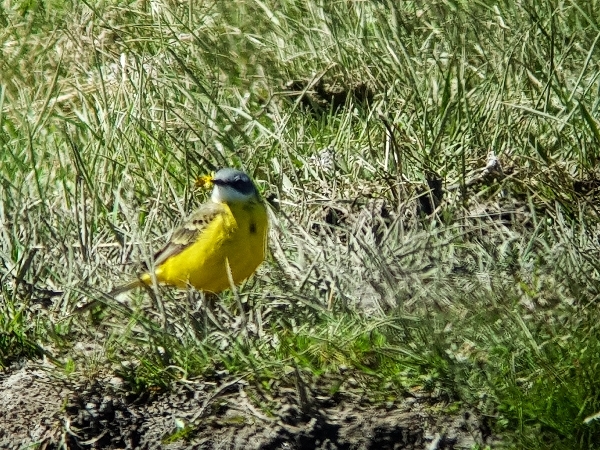 It was 5pm when we arrived at our hotel on the outskirts of Navarredonda, it is a new venue for WINGSPAN, a change for the better. The hotel has 3 bird hides in the wooded grounds, the owners are birders and very birder friendly, the whole place I covered in birdy information, photographs and birdy paraphernalia. After settling in we drove down the valley to look for Citril Finch without success, we did see Cirl Bunting, Mistle Thrush and several other common species. We then returned to the hotel for a short spell sitting in one of the hides, the birds get so close it is a lovely experience. We saw a few species but it was late in the day.

After a superb dinner with a nice glass of wine we sat on the upper terrace and listened out for Nightjars, around 10pm we heard a couple of European Nightjars and 3 of us decided to walk along the main road to find them. Despite getting very close to the calling birds we never actually saw one, tomorrow night we shall be more prepared.