WEATHER: you would think that clouds might appear in the mountains, but no, we never saw a cloud all day, just perfect. Temp ranged from 10 – 25C

It was quite cold when we got up and  the wearing of fleeces was required, but it soon warmed up after breakfast. We met at 7am and spent half-an-hour in the front car park of the hotel just watching and listening to a host of species. We took a short walk into the pine woods adjacent to the hotel and found Coal Tit and an Iberian Pied Flycatcher, the latter was visiting a nest box put up by the hotel owners.

A Green Woodpecker drummed a couple of times without showing we also saw Bonelli’s Warbler, Black Redstart and we had great views of a couple of Crested Tits. Breakfast was nice, the coffee was excellent and by 8:30am we were on our way to the Plataforma de Gredos, which is about 15km from the hotel along a winding mountain road. We stopped at the Camping de Gredos site to look for Citril Finch without luck, but we did find Goldcrest, our first Song Thrush, lots of Serins, Eurasian Nuthatch, Jay and a few common species. 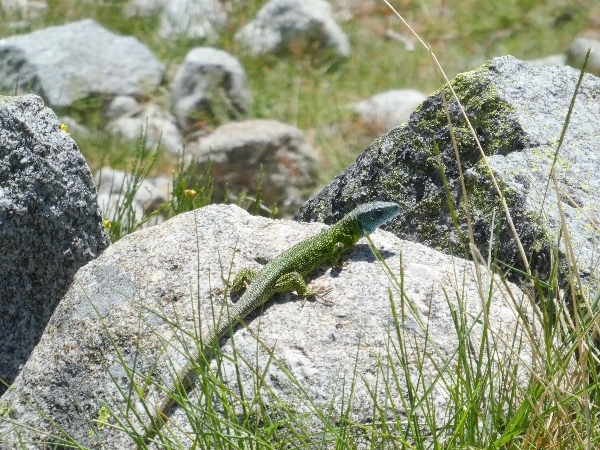 As we worked our way up into the mountains we made several stops to scan the hillsides and to enjoy some nice sightings of Red-backed Shrike, Ortolan Bunting, Common Whitethroat, Linnets, Yellow and Grey Wagtails and Common Stonechat. Near the car park at the top we saw several Rock Buntings and even more Ortolan Buntings. We then heard a Common Rock Thrush singing and soon we had it in the scope, what a smashing bird, furthermore we found a Blue Rock Thrush and a Red-legged Partridge up on the rocks too! A group of Spanish Ibex were seen on the skyline some way above us, we only saw females and youngsters and not the  adult males with their impressive horns. 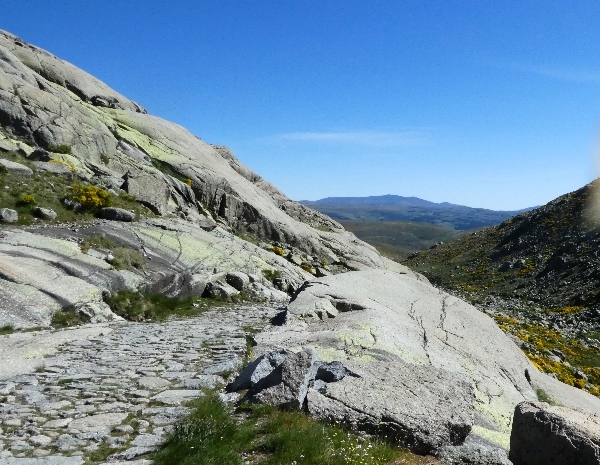 As we walked higher, we found Skylarks, more Ortolan Buntings, Dunnocks and Northern Wheatears, but we could not locate a single Water Pipit! The weather was just perfect for our walk in the mountains and the light was exquisite, we came across a second Common Rock Thrush which posed nicely for our cameras. 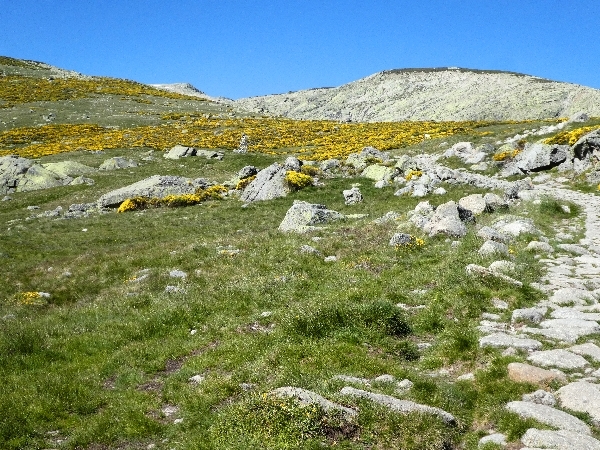 the yellow gorse-type plant where we looked for the Bluethroat

After about an hour we came to a more open area where large tracts of land was covered in flowering gorse, we searched this area for our star bird the BLUETHROAT. 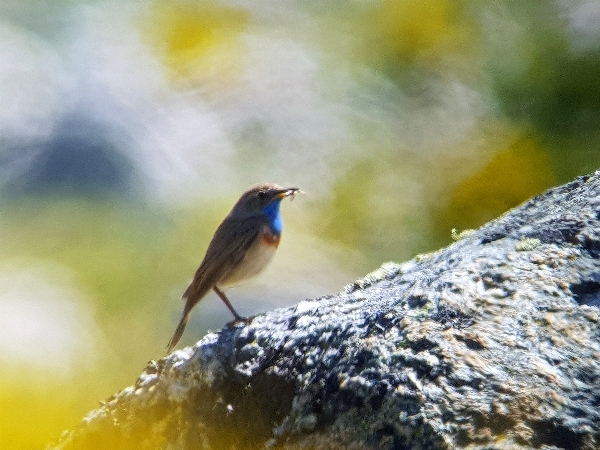 It took a while, none were singing or displaying, but eventually we found a male. We saw it twice perched on a rock and realised that on both occasions the bird was carrying food, so it was obviously feeding young. 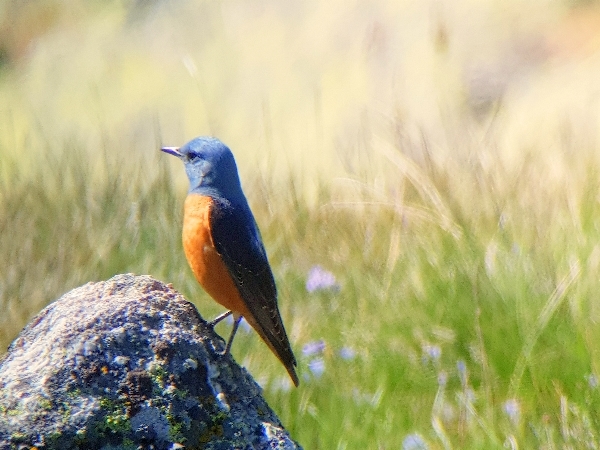 Other birds gave great views as we made our way back down to the car park, a Skylark posed nicely as did the very grey looking Dunnock but we never found a Water Pipit. From the car park we drove down towards Hoyos de Espino, a coffee stop near the river Tormes was much appreciated and after driving into Hoyos to buy lunch supplies we returned to the river to eat it. 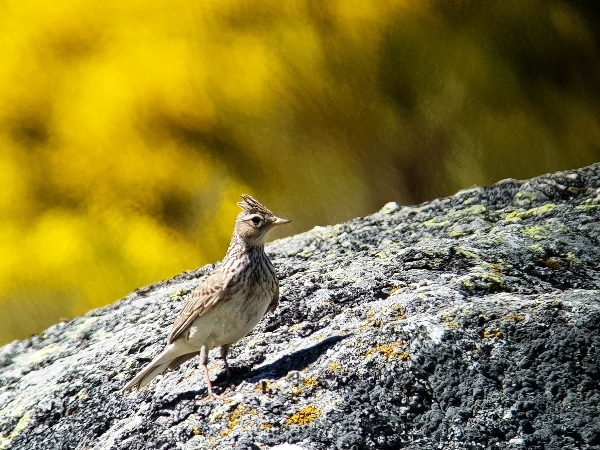 For an hour we searched the river area for Citril Finch without luck, we did enjoy Pied Flycatcher, Eurasian Nuthatch, Eurasian Jay, Short-toed Treecreeper, Serin, Grey Wagtail and lots of Chaffinches. We continued our search by taking a side road that followed the river, after a couple of stops in he heat of the afternoon we still had not seen a Citril Finch, We added Garden Warbler, Mistle Thrush and Red Kite to the day list and our last port of call was just below the village of Navarredonda near the ‘bull ring’. There we watched Rock Sparrow (Paul missed it for the third time), also Yellow Wagtails, Serins and Linnets. 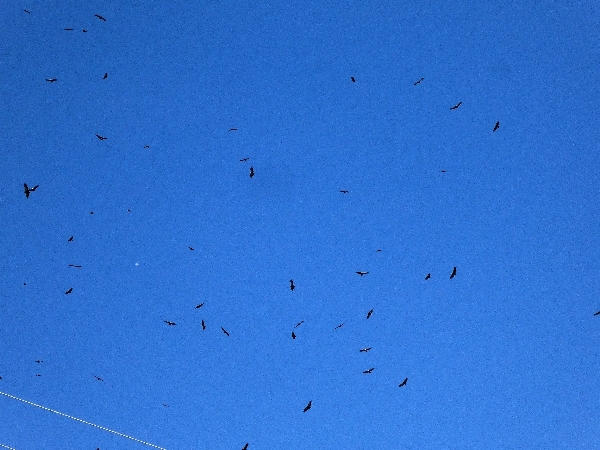 Just before we left a huge swirling mass of Griffon Vultures came up from beyond the village, there must have been nearly 200 of them it was an amazing sight. They were joined by 15 Black Kites, a single Red Kite and two or three Black Vultures, it looked like a ‘mass migration’ often seen down in Tarifa. 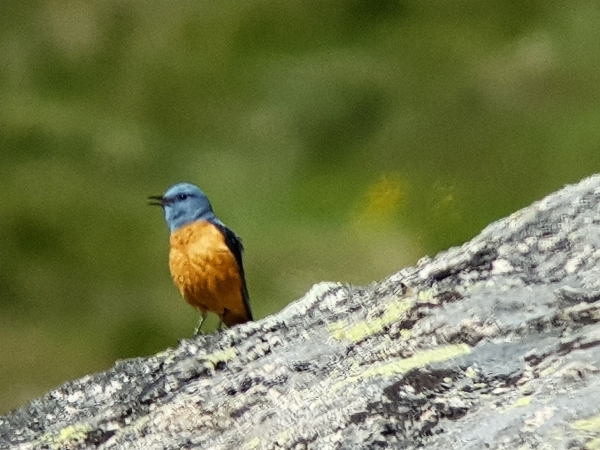 another picture of the Common Rock Thrush - what a stunner

We called it a day at that point and arrived back at the hotel at 5:30pm. We had a couple of hours in which to relax, some went birding others had a rest, it had been another brilliant day with some treasured memories. Today's birding was not quite over yet, three of us went looking for European Nightjars, it was a perfect evening for looking, no wind a lovely sunset and no biting insects. We managed to hear two of them and had excellent views of one, it showed really well flying around our heads at times, job done off to bed.