Flight UK to Madrid – Transfer to Fuendetodos Last night I caught a flight to Madrid in preparation for my last WINGSPAN tour of the spring season in Spain. The Spanish Pyrenees and Picos de Europa.

Today I met my group of 14 clients from the Oxford RSPB members’ group. They arrived right on time at 11am at Madrid Airport however my second driver did not! He should hace arrived last night on an EASTJET flight that was cancelled at the last minute. This resulted in a 4 hour delay before the trip could start proper.

Whilst waiting for Richard, our second driver, to arrive, I drove the group in relays to the centre of Barajas the nearest small town to the airport and it was there that we waited.

During our waiting we had a nice time sitting in lovely sunshine watching birds in the main plaza of Barajas. White Storks were breeding in trees in the plaza, Serins, Spotless Starlings, Common and Pallid Swifts zoomed overhead and a number of Monk Parakeets sat noisily in the fir trees. 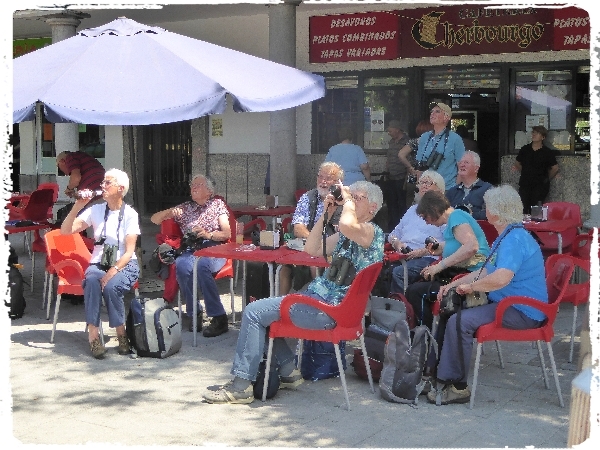 A nice way to while-away a couple of hours, watching White Storks

At 3:30pm we were on our way at last! We stopped for a break half way to our hotel having seen a few species on the motorway including a Black Redstart. As we turned off the motorway we saw more birds: Common Buzzard, Turtle Dove, Black Redstart, Crested and Calandra Larks, Common Raven and a possible Montagu’s Harrier.By the time we arrived at our hotel it was too late to go birding, so after a quick wash we enjoyed a cold beer before a tasty ‘Spanish tapas’ style dinner.

No bird call tonight or photographs, the list will be done tomorrow night.