TRANSFER FROM HECHO VALLEY, PYRENEES TO COSGAYA HOTEL, PICOS DE EUROPA. Before breakfast 8 of the group got up very early and made the journey to Garbadito for a second attempt to see the WALLCREEPER, they set out at 6:40am. It was a misty morning with little wind, cloud drifted down the valley. It was clear up at the rock face where only one of the group managed to see a WALLCREEPER!

Other birds recorded during the early morning walk were: Black Woodpecker (heard), Crested Tit, Coal Tit, Wren and a Citril Finch appeared in the car as the vehicle pulled away.

We set out at 9:45am for the long journey to the Picos, our estimated arrival time was 6pm. We drove for 2 hours before we stopped for coffee etc.  passing through Pamplona and Logroño we had logged several raptors including both Kites, Common Buzzards, Griffon and Egyptian Vultures and a cracking male Marsh Harrier. 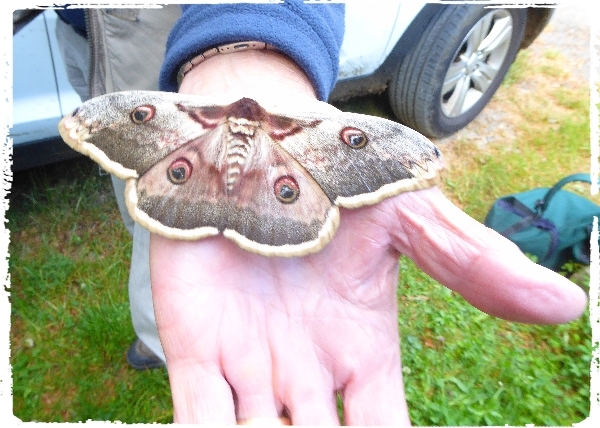 The magnificent Giant Peacock Moth is the largest moth or butterfly in Europe - found on the side of my bus this morning!
We stopped for lunch at 1:30pm sitting in nice warm sunshine at a roadside picnic site. A few minutes before the leading bus had seen a Roller perched at the side of the road, a great bird for the trip. Common Nightingale, Corn Bunting, Greenfinch, Serin and Common Buzzard were seen during lunch. 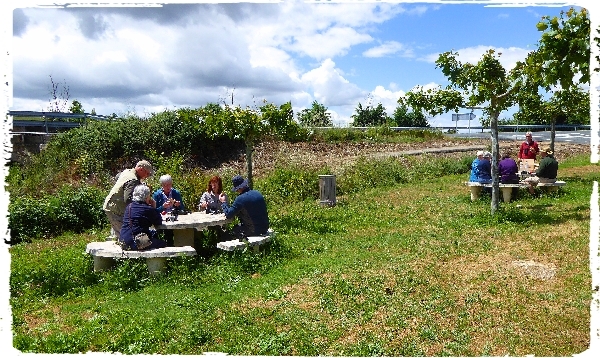 After lunch the two buses unintentionally split up, we both took different directions to the hotel arriving within 5 minutes of one another around 6:30pm. My bus stopped 3 times for short birding episodes, the first was on an open plateau where we logged a flock of some 20 Stock Doves, Curl Buntings, Serins, Linnets and Egyptian Vultures.

Our second and third stops were along the shoreline of the Embalse Ebro where we logged a Hobby, Mallard, Gadwall, both Great Crested and Black-necked Grebes, Grey Heron, Little Egret, White Stork and not much else.

The second bus logged similar species at another reservoir but added Red-legged Partridge to the trip list.

We reached our hotel deep in the Picos around 6:30pm,  Dipper and Grey wagtail were seen on the river Deva which runs just outside our hotel in Cosgaya. We ate a lovely dinner and toasted the England Football team, they actually won a tournament game!