WEATHER:  hot and sunny all day with an ever-increasing wind. Top temp 28C

After an early breakfast we left the the hotel at 8:15 and drove the very short distance to the beach just outside of Tarifa called Los Lances. Our walk along the board-walk and past some open fileds produced a few sightings which included: a mixed flock of swifts containing both Pallid and Common, also House Martins, Barn & Red-rumped Swallows and in the fields we noted a flock of Corn Buntings and a couple of Crested Larks. 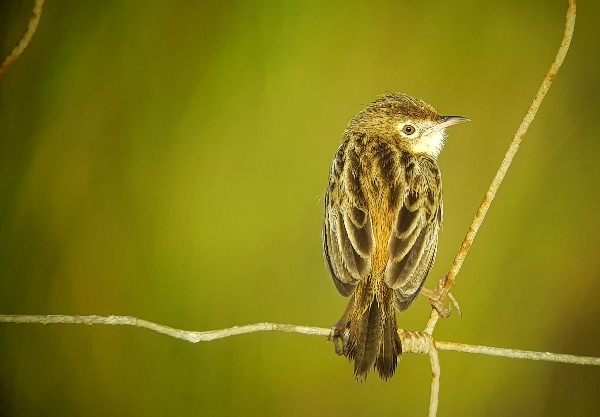 Zitting Cisticola taken near the hide at Los Lances

From the board walk and the only hide at Los Lances beach, we recorded a host of species and enjoyed an excellent couple of hours of birding there. Many waders fed on the exposed mud whilst large flocks of gulls and terns loafed on the sand or sat on posts. Birds of note included: Audouin’s Gull, Sandwich Tern, Knot, Whimbrel, Kentish Plover and dozens of Sanderling.

The old hide overlooking Los Lances beach, I'm surprised its still standing as it gets such a battering from the wind.

About 9:30am we noticed that good numbers of raptors were filling the sky and heading out to sea towards Morocco. Honey Buzzards were the most common, some them flew very low over us. We also noted Black Kites, Booted Eagles and a small number of Marsh Harriers, two Night Herons also flew over at quite a height. 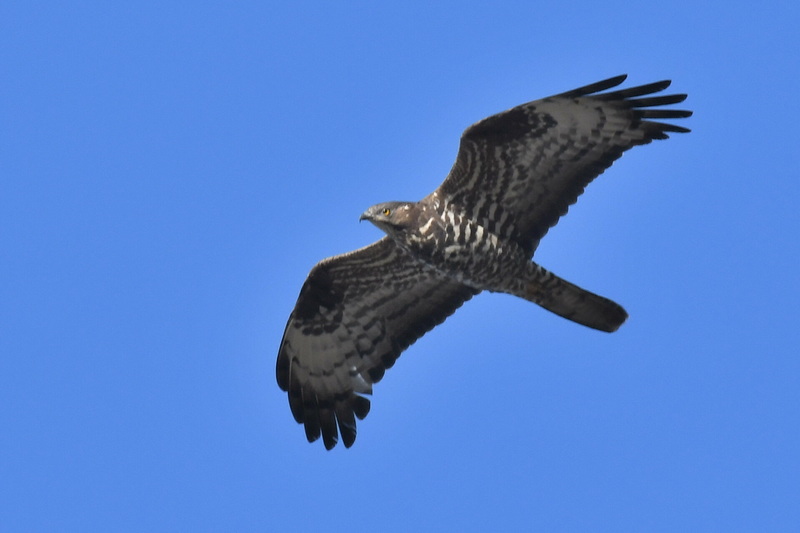 one of many Honey Buzzards that drifted over us at Los Lances beach, taken by Richard Pettett

Out at sea we noticed huge numbers of Cory’s Shearwaters feeding just off shore with the odd Northern Gannet fishing too. We also noted Common Kingfisher (3), Dunlin, Greater Ringed Plover, Dunlin, Curlew Sandpiper, Redshank and we had very close view of Zitting Cisticola.

On the grass meadows behind the beach we found Skylark, Crested Lark, Greater Short-toed Lark, Yellow Wagtail and a few Goldfinches. On the way back to the car we noted a mixed flock of starlings, both Common and Spotless fed together on figs.

on the board-walk with the beach hide behind us

After collecting our lunch supplies at a supermarket in Tarifa we drove to Algorrrobo raptor watch point where we spent an enjoyable couple of hours watching a trickle of bird fly over us. Honey Buzzards were the most common we saw about 400 of those (at least 4000 had crossed over yesterday) also Booted Eagles and Black Kites were in good numbers but that was it. A flock of some 70+ Bee-eaters were very distant and singles of Sparrowhawk and Common Kestrel joined the ever-present Griffon Vulture.

Algorrobo look-out - when its not crowded like today you know you've picked the wrong day to visit.

At lunchtime we left the observatory and drove up the hill to El Bujeo natural park where many picnic tables are scattered around a collection of eucalyptus, cork oak and olive trees. As we sat eating our lunch we were delighted by the antics of many Common Redstarts and Spotted Flycatchers. We also noted Blue and Crested Tit, Common Chaffinch and Goldfinches. 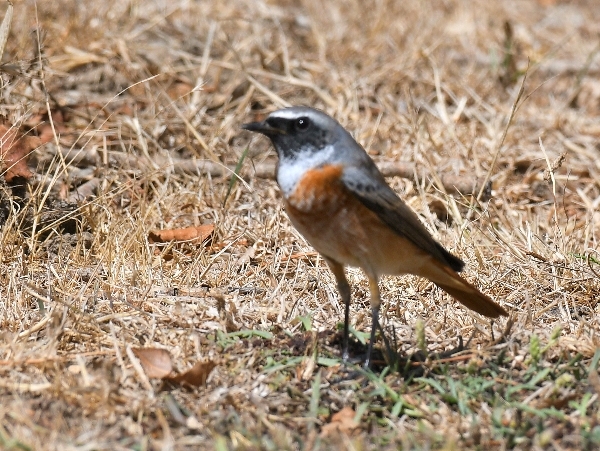 A walk after lunch produced a few more sightings and not all of birds. We had brief views of Cirl Bunting and a few dragonflies and butterflies caught our attention. Both Keeled & Epaulet Skimmers were noted as well as Swallowtail Butterfly, Painted Lady, Monarch and Meadow Brown.

We made a very brief visit to the observatory at El Trafico but the wind was so strong that we were unable to get out of the bus and stand up up straight let alone use our binoculars.

For the last few hours of the afternoon we tried our luck at La Janda but we couldn’t get away from the strong winds it was very windy there too. Our drive along the central track was at first birdless, especially because now the small rice ‘paddy-fields with connecting reedy ditches have been replaced by huge fields of cotton. 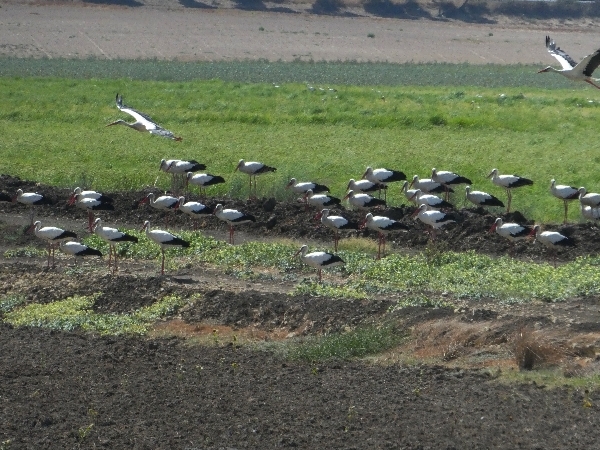 White Storks in the rice fields at La Janda

Marsh Harriers did not seem to mind the conditions and drifted over the rice fields as usual. We also stopped to look at Green Sandpiper, Yellow Wagtail, Woodchat Shrike, Zitting Cisticola and a nice flock of Spanish Sparrows.

Driving up the track to the ‘smelly farm’ the wind seemed to abate somewhat so we got out of the bus to look for roosting Red-necked Nightjars. Nick found the first one and Tony produced a second whilst a third bird was seen by Christine but only in flight, obviously flushed by us I am sorry to say. 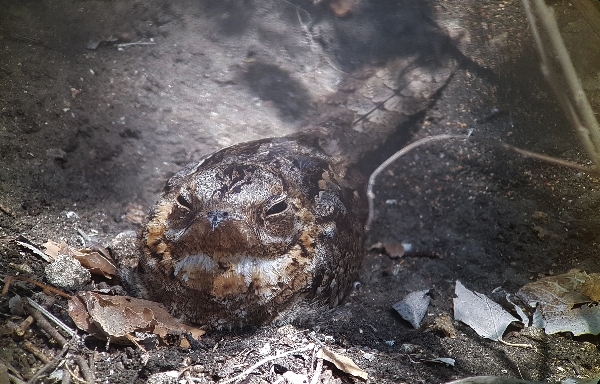 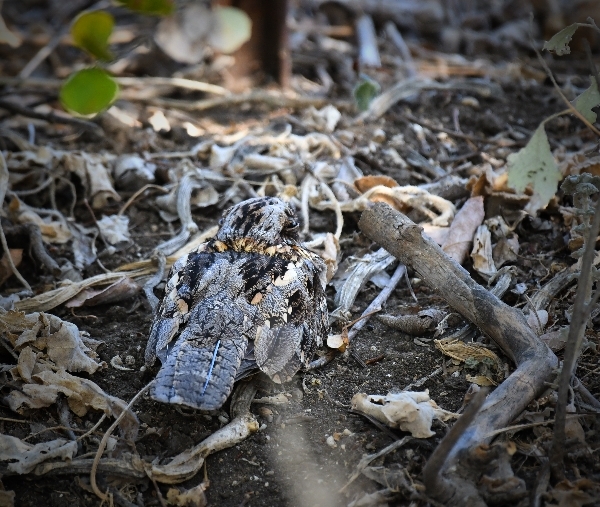 a second Nightjar was much harder to see, found by Nick Goss and photographed by Richard Pettett

On the way back to the rice fields we stopped near some sluice gates and found Common Kingfisher, Turtle Dove, Common Stonechat and a juvenile Woodchat Shrike. As we approached La Janda rice fields on the return trip we watched a huge flock of Wood Pigeons, there must have been a thousand birds, an incredible mass of feathers took to the air as a Peregrine swooped down and missed the lot of them! 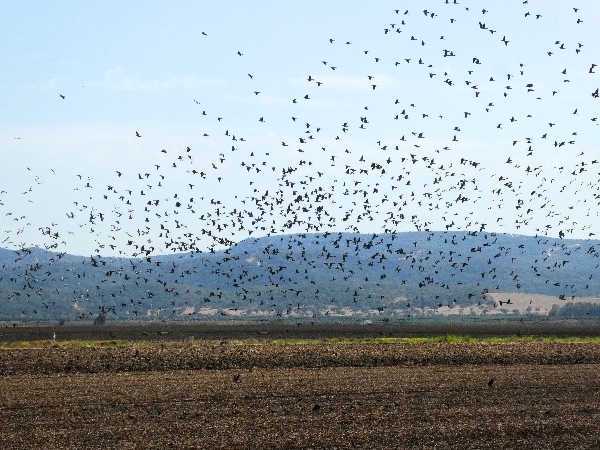 Before we left the area we stopped to watched what we thought was a juvenile Montagu’s Harrier but on closer inspection it turned out to be a juvenile Hen Harrier, a smashing bird to finish the day with. The weather forecast is for very windy conditions for the rest of the week, I don’t know how that is going to affect our birding. 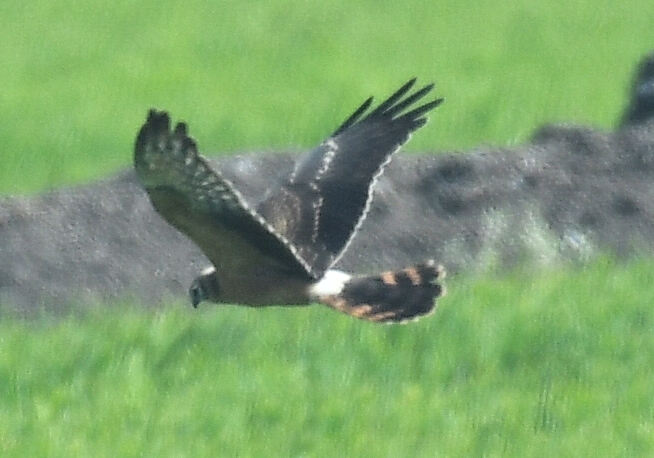