Today was a repeat of yesterday's wonderful day at La Janda except for today the weather was even better, much warmer and less wind.

I met John & Mary, my friends from America who also have a home here in Gaucin. After arranging to meet on the edge of the village at 8:30am we eventually set off around 8:50am, this delay proved to be benificial as I found some Crossbills in the trees near our meeting point whilst waiting! A nice bird to start the day list. 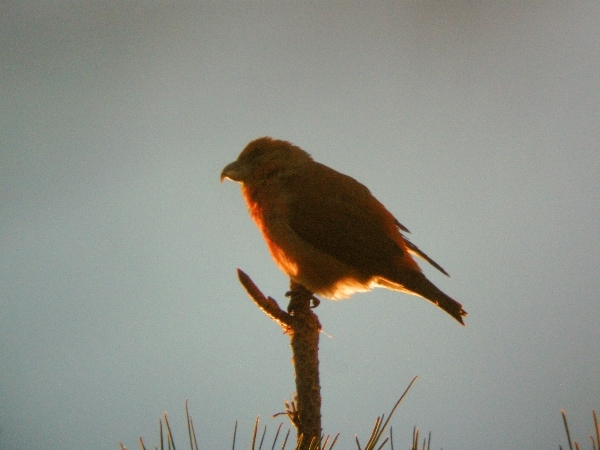 A male Crossbill in the morning light taken at Gaucin.

We drove down to the coast via Jimena de la Frontera noting Common Buzzard, Black Redstart, Corn Bunting and Stonechat along the way. After stopping for coffee, pastries and buying picnic supplies we eventually arrived at La Janda  around 9:45am.

We drove straight down to the central tarck and parked the car, it was bright sunny and warm with plenty of birds to look at. Most of the same species of birds were still around from yesterday except for the large flocks of Calandra Larks which we could not find. We saw Common Cranes, White Storks, Grey Herons, Lapwings, Corn Buntings, Meadow Pipits, Little & Cattle Egrets, Stonechats and Crag Martins. 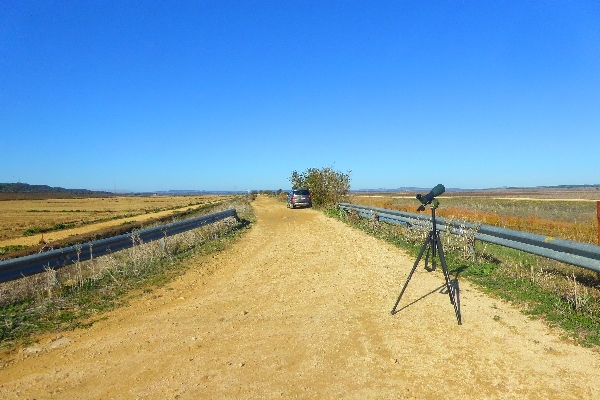 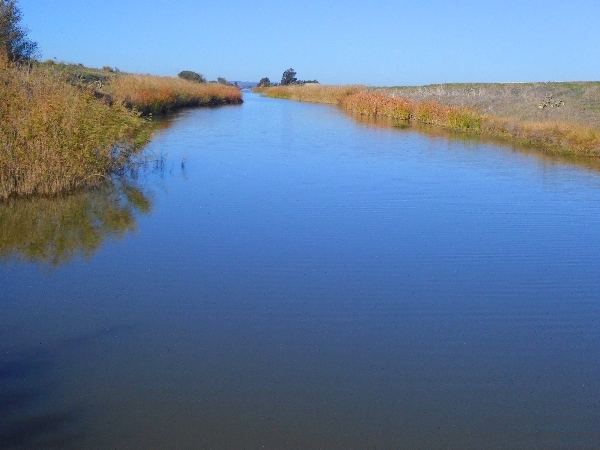 the central 'drain' which runs parallel to the track

Along the drain we found the usual Purple Swamphen, Mallard, Zitting Cisticolas, Goldfinches, Linnets and more Corn Buntings. Our first stop also produced Reed Bunting and a male Bluethroat. A little further along we found a Black Stork which circled above us, later we went to find 3 more Black Storks. 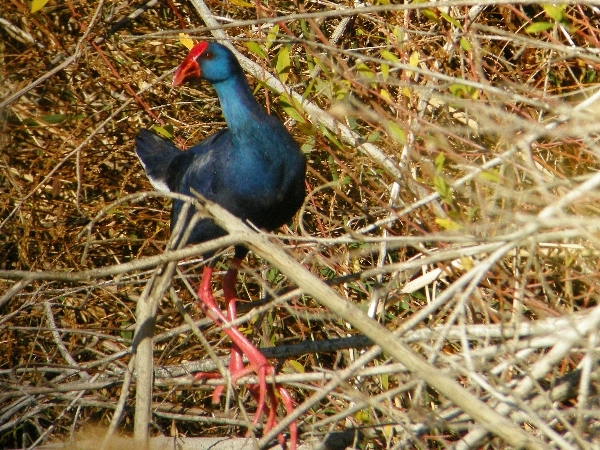 We stopped for lunch and then I took a long walk along the track noting a beautiful male Hen Harrier, lots of Marsh Harriers, 10 Eurasian Spoonbills, another Black Stork, Greater Flamingos and a Bonelli's Eagle. 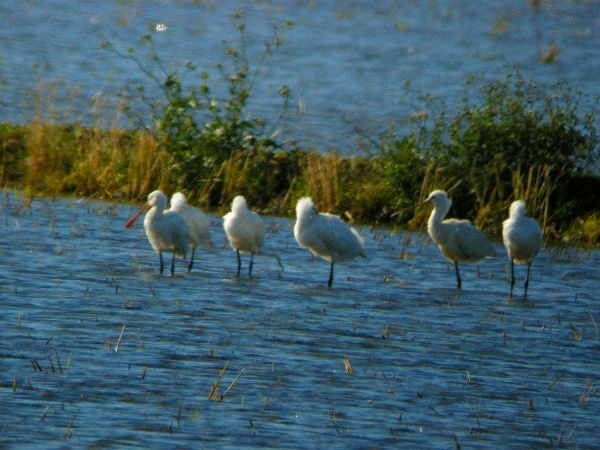 Before turning onto the track to the smelly farm we caught up with a huge flock of finches and sparrows where we saw Chaffinch, House & Spanish Sparrows and a good number of BRAMBLINGS.

Towards the farm we found a Night Heron and then discovered a fantastic adult Spanish Imperial Eagle, this bird showed very well as it circled above us. At the farm we saw Common Pheasant, Red-legged Partridge, Jackdaws and in a field next to the farm we saw a dozen Stone Curlews. 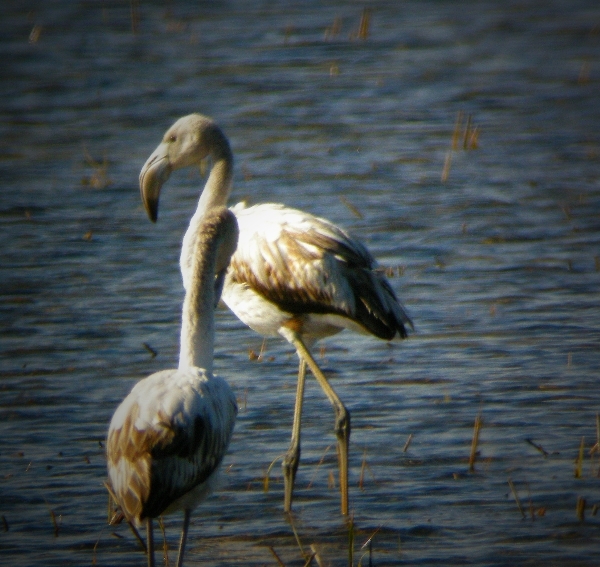 For the last half an hour we stood on the track to Benalup hoping for a view of the GREATER SPOTTED EAGLE that had been seen recently, unfortuately it never showed but we see another Bonelli's Eagle, a Booted Eagle, a Red Kite and quite a few Marsh Harriers. Flocks of Serins, Goldfinches and Linnets kept us busy whilst we waited for the eagles. 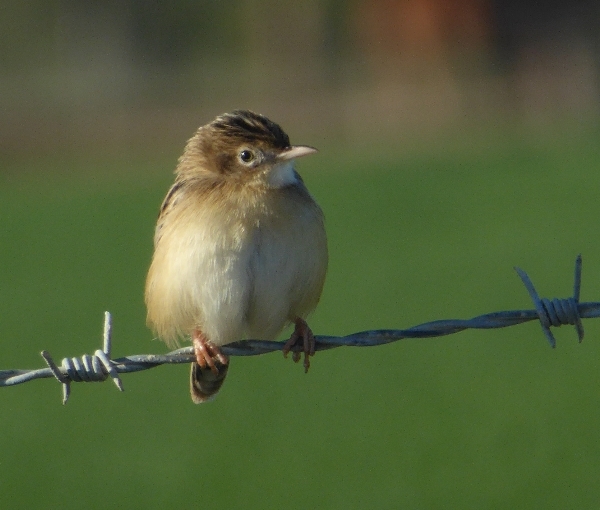 Zitting Cisticola -  a coomon bird along the track side 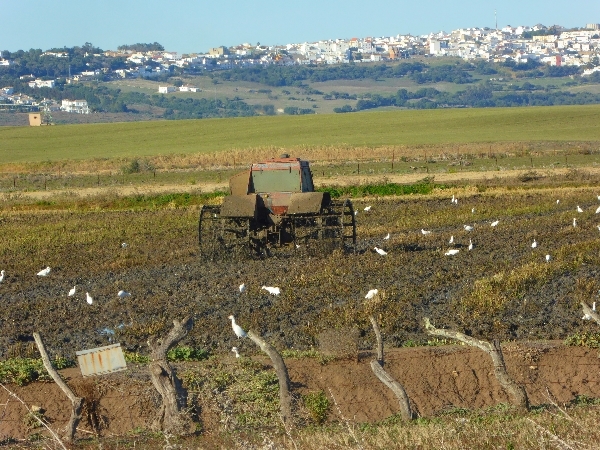 We left the area around 4:30pm and drove home via Benalup and Los Barrios  arriving around 6pm. These last two days at La Janda had produced 80 species of birds including 11 species of raptor, what an amazing place to visit even in the middle of winter!