Today I was joined by four friends as I made a mini tour of the ‘levels’, Cheddar Reservoir and Chew Valley Lake, we had glorious sunshine for most of the day and we saw some great species. I picked up Guy in Yeovil at 7:30am and we drove straight to Ham Wall RSPB reserve on the ‘Levels’ where Nigel was waiting for us. Shortly after 8am the last of our group arrived, Leesa and Mervyn, they are from the Midlands and are down in Somerset for a few days. 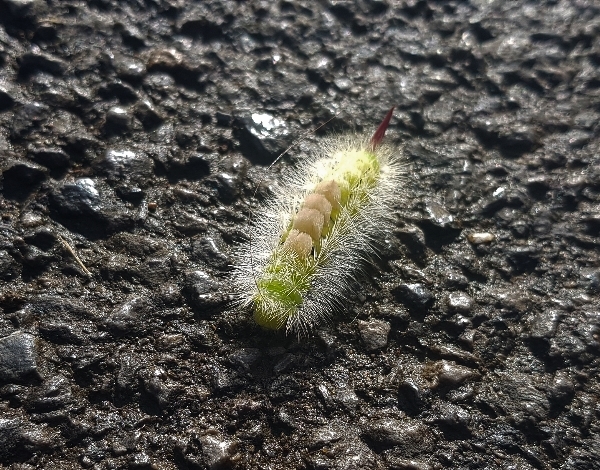 does anybody know what species this is?

We walked to the first viewing platform along the main track at Ham Wall, noting Great White Egret in flight, Gadwall, Mallard, Moorhen and Cormorant. A couple of Grey Herons and a female Marsh Harrier were seen in flight too but not much else could be seen from the viewing platform. 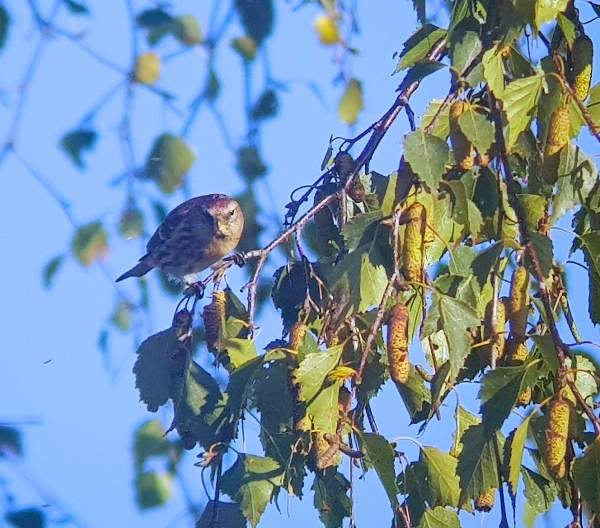 Lesser Redpoll seen along the main track at Ham Wall

We only intended to visit this part of Ham Wall because our main birding destination was Cheddar Reservoir and Chew Valley Lake, so we turned around and headed back to the car park. Along the way back we found a mixed flock of Redpolls and Siskins feeding in the Alder Trees which was nice to see. We also watched Common Chiffchaff and a few common woodland species. 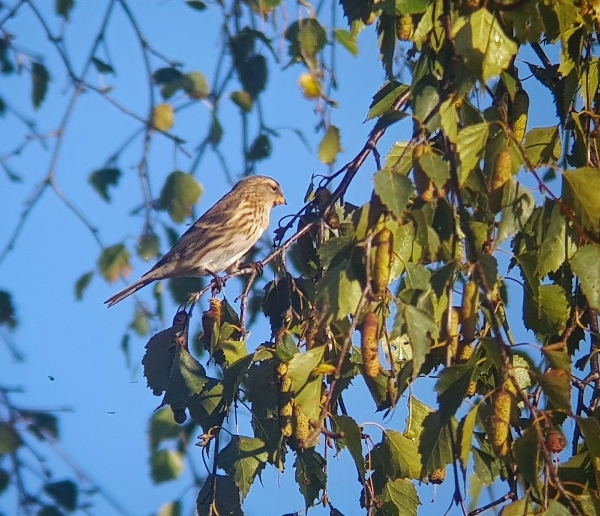 another view of a Redpoll

Next we made our way to Cheddar Reservoir, we took a route through Tealham Moor so that we could add Cattle Egret to our day list, we saw 7 of them just north of Ham Wall and another 20+ on Tealham Moor.

At Cheddar our main target bird was the long-staying Red-necked Grebe, so we parked at the Axbridge car park because that is where the bird preferred to feed. Alas after 15 minutes of scanning we realised that the bird was on the far side of the Lake near the Cheddar car park, so we all drove around to that side (it was too far and time consuming to walk). Once at the Chaddar side we scanned the water and soon realised that the bird had moved into the centre of the water and was heading to where we had just come from!!  Doh!! Nevertheless, the light was much better from this side and we had good ‘scope views of it. 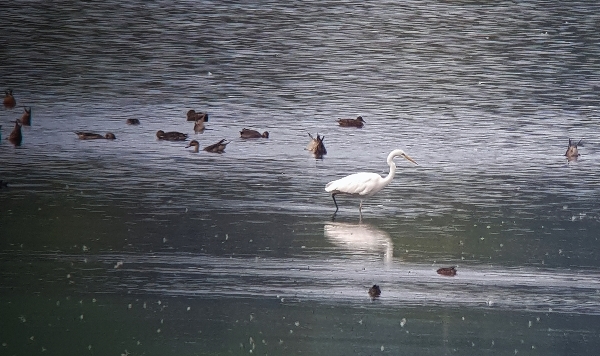 Great Egret with lots of Pintails behind it 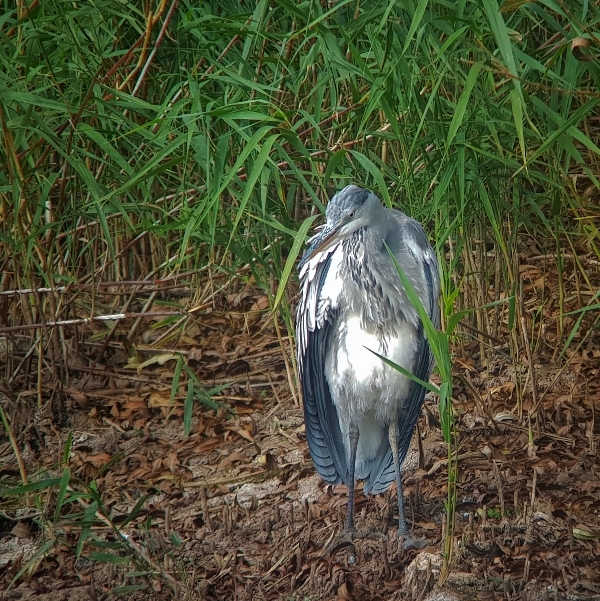 a Grey Heron on the bank of the 'Channel' 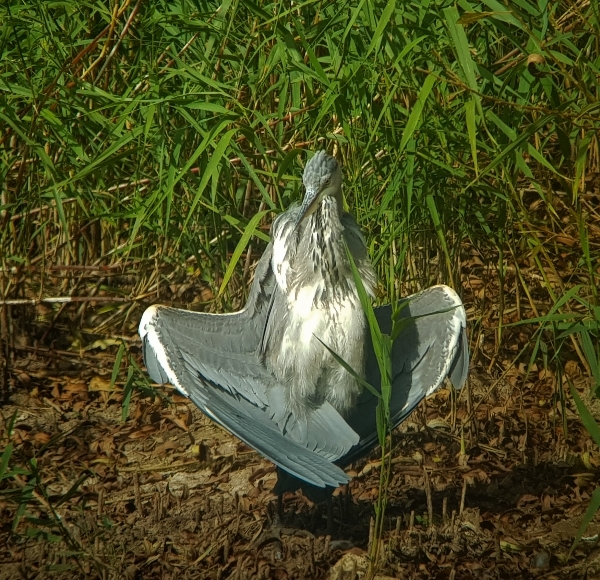 Grey Heron in the crucifix pose.

After a quick cup of coffee we set off for Chew Valley Lake which is about a 20 minute drive from Cheddar, we drove right up through the famous Gorge and down to Chew. Our first stop was at Herriot’s Bridge where we spent a good hour or so, the light was excellent and a light breeze kept us cool. Many birds were on the Pool and thousands were on the lake, you could see over 20 Great White Egrets with Little Egrets, Grey Herons, Mute Swans, Cormorants and all the common ducks. 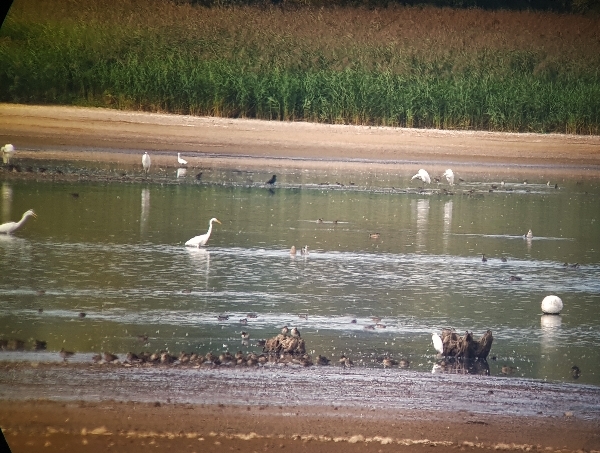 all three Egret species are in this picture, can you spot them?

On the pool fewer waders than of late were seen, just a few Common Snipe and a couple of Green Sandpipers, the water level has risen so the bank of exposed mud that had been present recently was now submerged. We found many more Pintail, some Shovelers and a Common Shelduck. We enjoyed prolonged views of a Water Rail found by Nigel and a Kingfisher sat out nicely in the ‘channel’, using our scopes we picked out a nice selection of waders on the shore of the main lake. 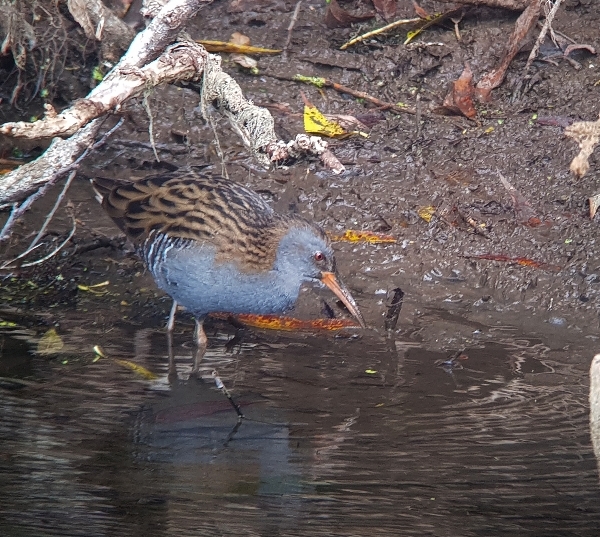 Ruff, Dunlin, Curlew Sandpiper, Greenshank, Spotted Redshank, Black-tailed Godwit, more Green Sandpipers and the star bird for me was a Wood Sandpiper, which Guy got on to. We also found a single Cattle Egret, dozens of Canada Geese and a Marsh Harrier. We heard Cetti’s Warbler several times but never saw one.

From Herriot’s Bridge we drove around to Heron’s Green after eating a ’99 ice-cream (a cone of ice-cream with a chocolate flake inserted into it ), where more of the same birds were seen. Nigel then picked out an impressive adult Yellow-legged Gull whilst we enjoyed even more Great Egrets. Apparently there was a count of 42 Great (White) Egrets at Chew yesterday, that is amazing considering that they were a rarity just 10 years ago. 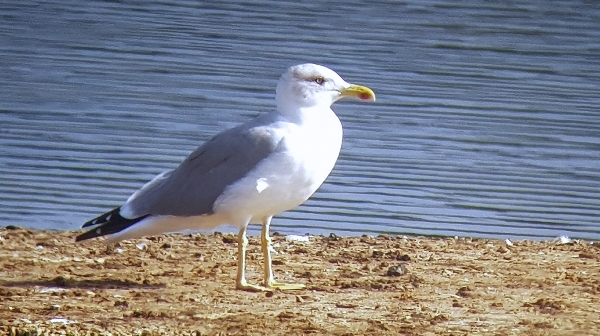 the view of the Lake at Heron's Green

At Heron’s Green we said goodbye to Nigel who set off back towards Wales, via Bristol, whilst the rest of us drove back to the levels to visit Westhay Moor. We arrived at 3pm and sat in the ‘Island’ Hide hoping for a sighting of the SPOTTED CRAKE that had been seen there over past few days. We heard Cetti’s Warbler, Bearded Tit, Water Rail and we saw Gadwall, Moorhen, Mallard and Marsh Harrier but not the Crake. Mervyn spotted an Osprey just before we left. 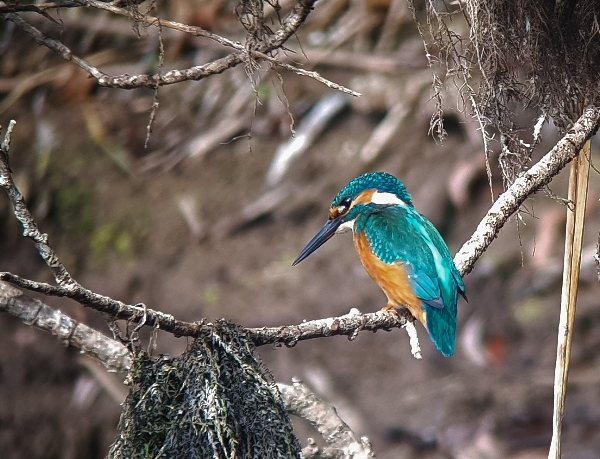 couldn't resist putting in another picture of this beauty

It had been a great day out. Lots of species to enjoy and great company, Guy and I said goodbye to Mervyn and Leesa in the ‘new’ car park (it has just been resurfaced), we were home just after 5pm.