WEATHER: another very cold day, with a cold northerly wind and a grey sky all day. Temp 2 – 4C

This was the first time this year that I went birding with one of my birding pals. After scraping the ice from the car’s windows I set off at 7am and arrived at Chew Valley Lake some 50  minutes later,   met Nigel Bleaken at Herriotts Bridge at 8am, Nigel was already in action with camera in hand.

Over the last few days up to three Ospreys have been seen fishing over the lake and a pair of Slavonian Grebes, in summer plumage, have been a regular sighting from the Bridge. We spent two hours waiting for an Osprey to appear and for the grebes to show. Guess what? Neither of them had the decency to turn up despite our efforts to get there. 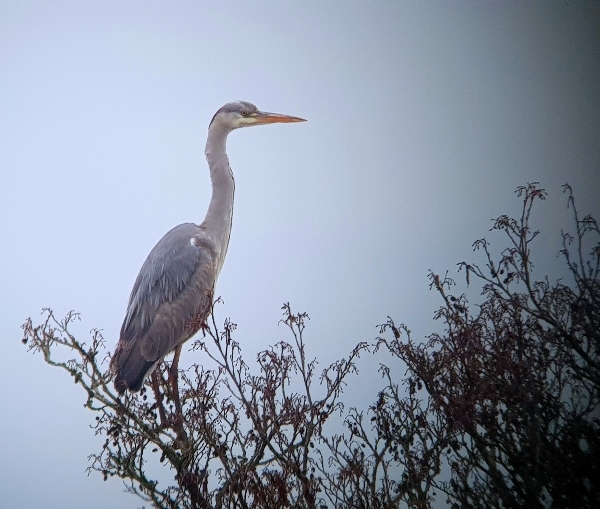 We did see a number of other species, I was delighted to see that at least 10 Goldeneye were present, very distance but easy to pick out from the throngs of Tufted Ducks, Mallards, Gadwall, Common Coots, Shoveler and Gulls. In the pool at Heriotts we expected to see a few waders but the water level was much higher than it usually is and there was no muddy edges to the water. 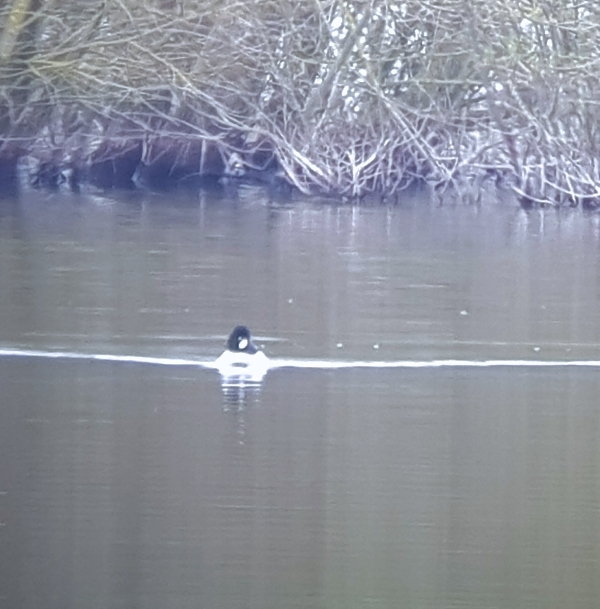 a poor record shot of a male Goldeneye, it was very distant.

Common Shelduck, Great and Little Egrets, Pied Wagtail, Teal, Moorhen and Canada Geese were also present. By constantly scanning the sky for Ospreys we found Common Buzzard, Eurasian Sparrowhawk and Common Kestrel. Nigel poured us a coffee and handed me a treble-chocolate muffin (don’t tell Dawn) before we set off to visit Heron’s Green a few miles down the road, it was another site from where we could look over the lake. 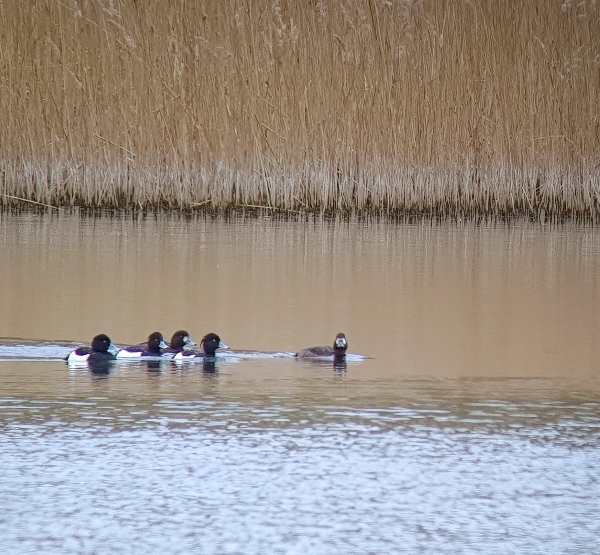 Tufted Ducks numbered in their hundreds in the bay at Heron’s Green, we scanned through them and discovered a couple of 1st summer female Greater Scaup, two other birds looked like adult females. These were a great sighting for my year list, we also saw 11 Little Egrets, a Little Grebe but nothing more new for the day. 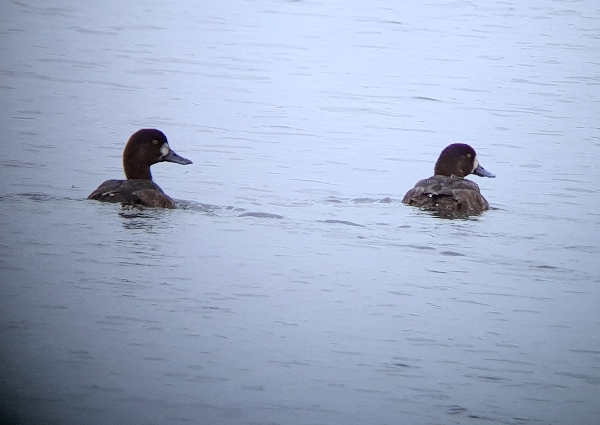 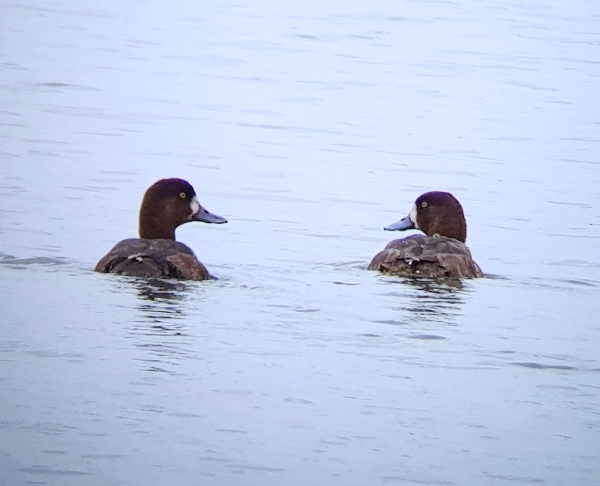 Our visit to the main car park near the dam produced a single Egyptian Goose and many more common duck species, but no waders. Nigel poured another coffee and past me a chocolate bar, I’m sure he is trying to fatten me up for the oven!! We then went to a hide at the end of the ‘Bittern’ trail but it was closed, however we did see a Common Kingfisher. A second visit to Heriotts Bridge was also disappointing, no sign of an Osprey. 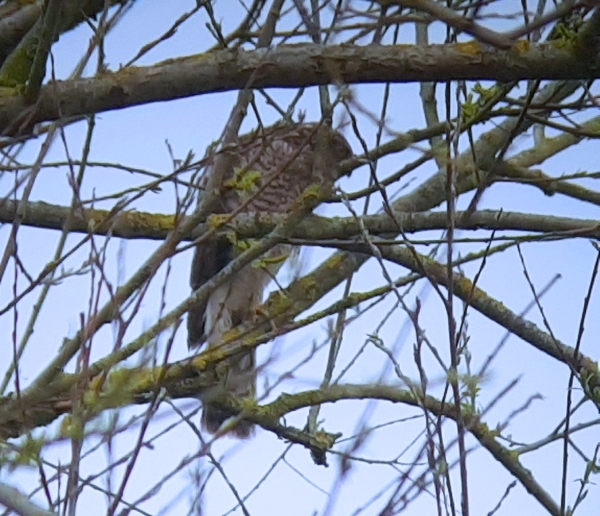 Other species we saw during our circumnavigation of the lake included: Cetti’s Warbler (heard), Green Woodpecker (heard), Reed Bunting, Chiffchaff, Blackcap (heard) and hundreds of Barn Swallows with a few Sand Martins.

We made an attempt to visit Blagdon Lake but the gate was closed so we abandoned our attempt and went to Barrow Gurney Tanks instead. These three large Reservoirs or ‘Tanks’ have hosted a Long-tailed Duck for the last two winters, Nigel had seen the bird earlier this morning so we knew it was still present. 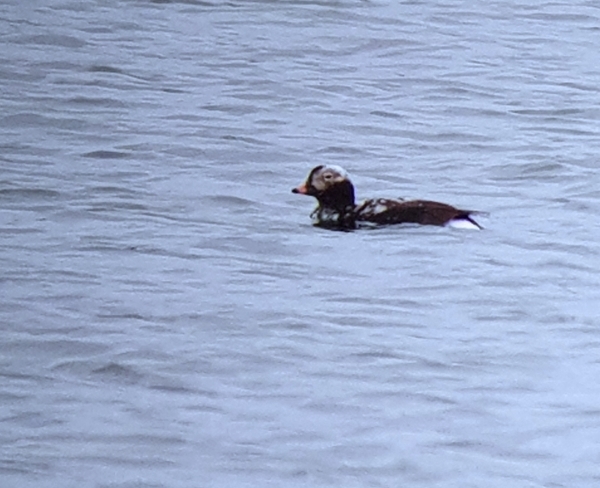 The Long-tailed Duck was located after a short scan, but it was quite far away and despite our efforts to get nearer the duck remained in the centre of the water and quite far away.

We parted company at midday having spent 4 hours dipping on an Osprey sighting, however, it was great to see Nigel again and do some birding together.

On my way home I stopped off at a known site for the now rare-breeding species of Somerset, the TREE SPARROW. I located two or three of them but they were not playing ball, I could not get a decent shot of them, so I left them alone and come away with a record shot of one of them. 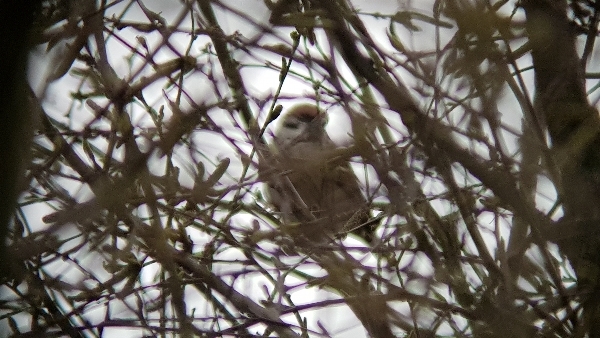 you can see the black spot on the face of the Tree Sparrow but not a lot else!!