WEATHER; a bright start, with light winds and little cloud. By 11am it clouded over, then heavy rain showers. Temp 12C

I made an early start today and collected Guy Campbell from his house in Yeovil at 7am, we then drove out to RSPB Ham Wall which took about 35 minutes. It was sunny and perfectly still when we got out of the car at Ham Wall, the air was full of bird song and then a Great Bittern flew over the top of us – how about that for a great start. 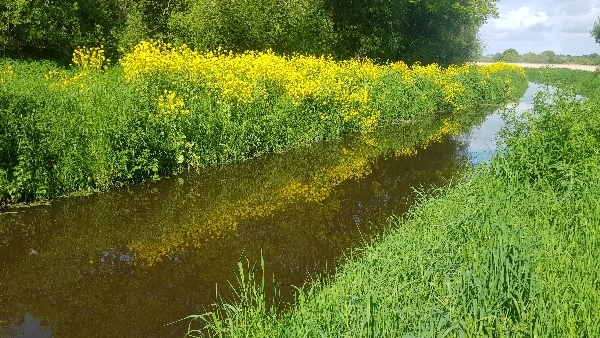 The main 'drain' was looking very pretty this morning

Before we even reached the main track onto the reserve, we had seen Blackcap and Reed Warbler, we also heard Chiffchaff and Garden Warbler. A Sedge Warbler was next onto the sighting’s list, it showed very well, quickly followed by a Common Whitethroat. Guy then picked out a Garden Warbler as we walked past the first of the open lagoons on the marsh. 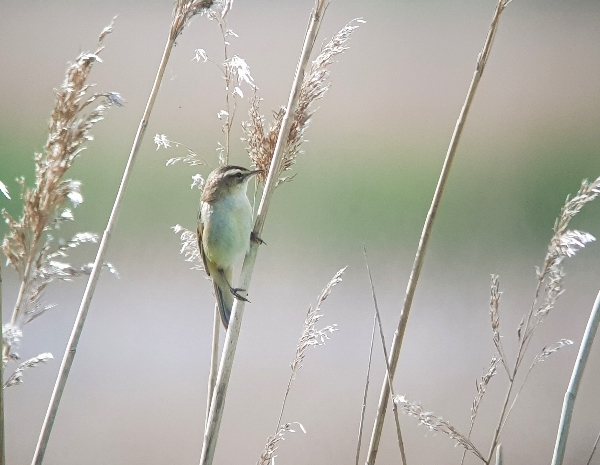 From the first View Point we searched for a reported Garganey which did not show, but we did find Great Egret, Mallard, Tufted Duck, Common Pochard, Gadwall, Moorhen, Coot, Lapwing, Great Crested Grebe and Mute Swan. Many of them had chicks. 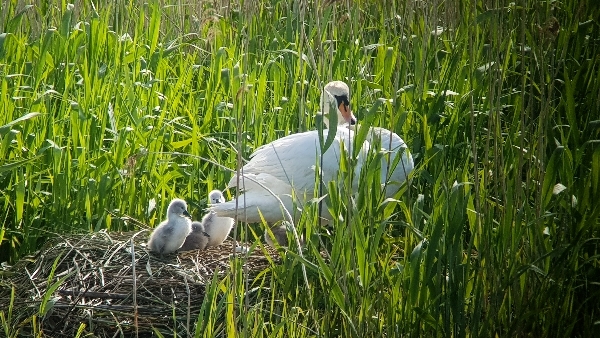 Overhead we saw many Common Swifts a few House Martins and Barn Swallows, a couple of Marsh Harriers drifted over the reedbeds and a Common Snipe dropped into the marsh. We made our way out to the Avalon Hide which was only re-opened yesterday after months of closure due to COVID restrictions. From the hide we had our second sighting of Great Bittern when Guy picked one out flying over the reeds. We added Little Grebe and Reed Bunting to our day list and at least three more Marsh Harriers were seen in flight. 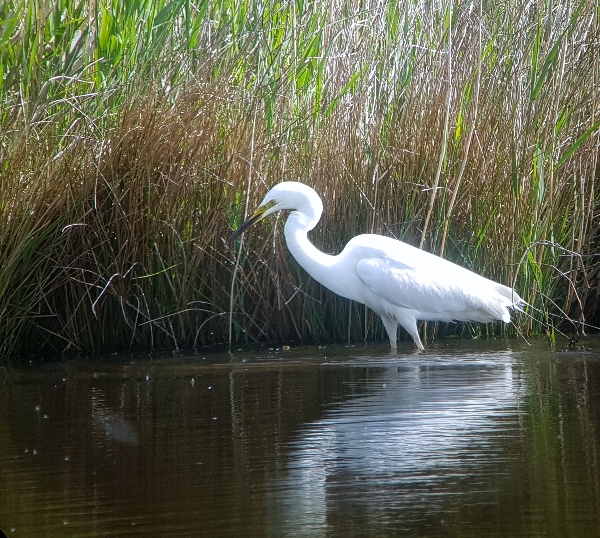 Great Egret with a tiny fish in its bill

The temperature rose quite significantly as the sun broke through the clouds for a prolonged spell, this enticed many insects to take to the wing, including dragonflies and damselflies. During our walk from the Avalon Hide back to the main track we noted Hairy Dragonfly, Azure, Common, Variable and Blue-tailed Damselfly, Red-eyed Damselfly and a Four-spot Chaser (female). 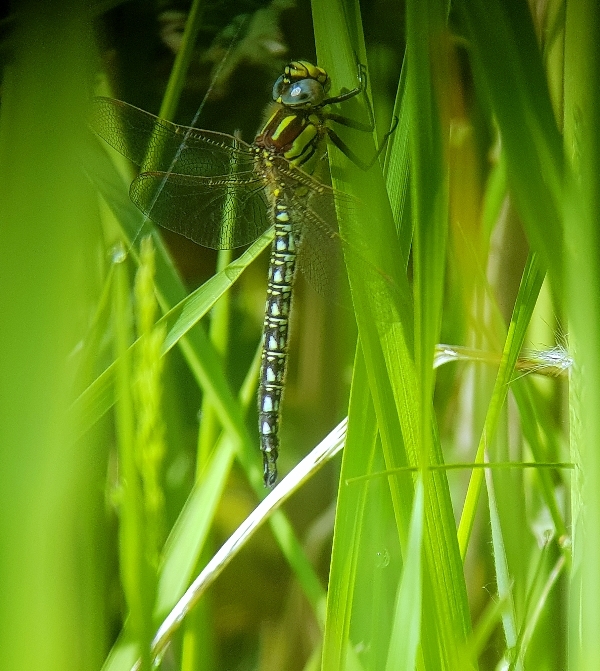 By the time we reached Viewing Platform No. 2 it was quite warm, but a breeze had come up. We watched the Swifts above us, Guy picked out a Peregrine Falcon and we both saw two or three different Hobbys. More Great Egrets fed in the open water but we never found any further additions to our day list. 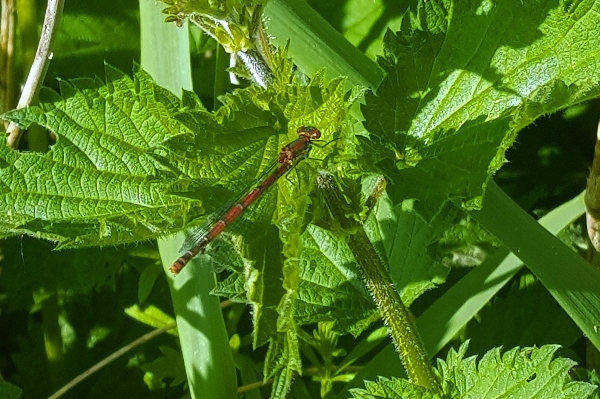 The journey back to the car produced further sightings of warblers, we had brief views of Cetti’s Warbler and more sightings of the other seven species, Chiffchaff, Willow Warbler, Common Whitethroat, Reed & Sedge Warblers, Blackcap and Garden Warbler. We also saw Goldcrest, Long-tailed Tit, Cormorant, Little Egret and many common woodland species. From viewing Platform No. 1 we picked out a Whimbrel which was a nice surprise, the bird flew off whilst we were there, making its distinctive 7-note call. 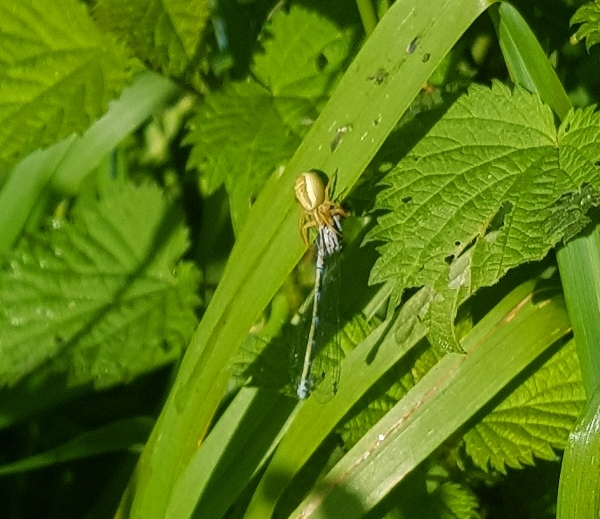 a Damsel in distress, or being eaten alive by a spider

Back at the car park at 10:30am we drank hot coffee and ate a snack before jumping into the car for the short drive out to Tealham Moor, we could see a cluster of dark clouds gathering and heading our way so we knew birding-time was short. Ten minutes later we were watching a Yellow Wagtail from a gateway overlooking Tealham Moor, we had great views of yet another Sedge Warbler and another Common Whitethroat. 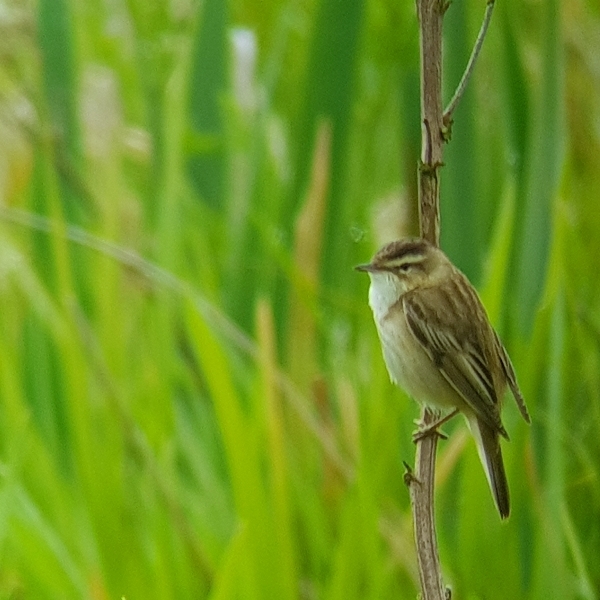 Many Swifts were whizzing around and we picked out a distant Cattle Egret amongst a herd of cows. It started to rain at 11am, we jumped into the car and decide to take an early lunch break. We cracked open our picnic hamper and devoured our respective sandwiches whilst drinking another coffee. During our lunch break the rain hammered against the windscreen and things looked grim. 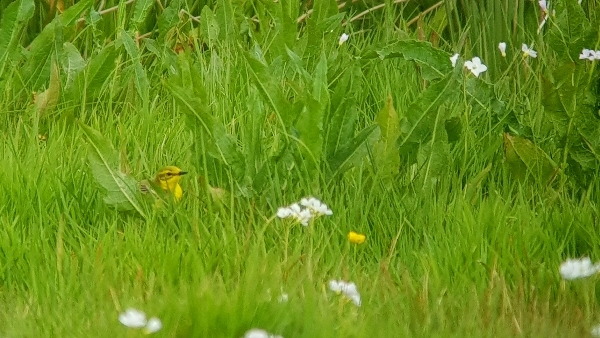 a Yellow Wagtail in the green grass

Guy received a message that a WOOD SANDPIPER was present, just 250 meters from where we were parked on Tealham Moor, it had been seen at 10:30 this morning. We waited in anticipation for the rain to stop, which it did about 20 minutes later. We quickly walked to an obvious marshy area with some open pools of water, that is where we expected the Sandpiper to be. Sure enough, we found the Wood Sandpiper in a matter of a few minutes, bingo!! 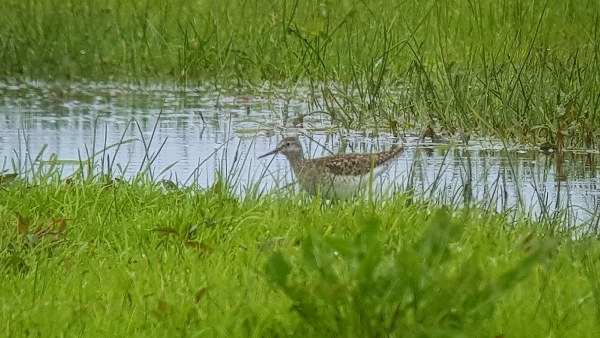 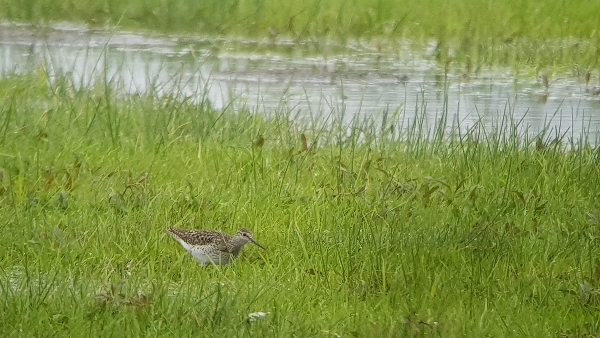 We also found several more Yellow Wagtails (two of which were mating), also Meadow Pipits, Pied Wagtail, Skylark and lots of Common Swifts. Before we left we scanned the marsh and found a Garganey!! Wow! We had completely forgotten to look for that one here, it was a male GARGANEY and it sat right out in the open for us. 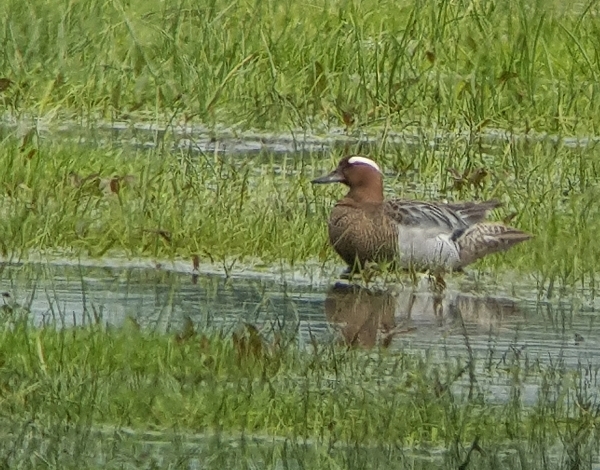 the male Garganey at Tealham Moor

From Tealham we drove a short distance to a lane around Mudgely, where usually you can find groups of Cattle Egrets, but we never saw a single one. The lane led us around the reserve at Westhay Moor where we added Common Kestrel and Common Buzzard to the raptor list, but nothing else was sighted. It started to rain again, it was now 1pm and so we decided to call it a day, a very good day, I must say!! I added three species to my year list: Garganey, Cattle Egret and Wood Sandpiper, nice one!!! My May list is now standing at 130.