WEATHER: Bright and sunny all day with some clouds later.  Quite windy at times.  Top temp. 16C

Today I collected Linda & Richard from their BnB in East Coker, they had booked a day out in Dorset with me and that is exactly what they got.

We drove down toward Wareham Forest  to make our first stop which was near some mixed woodland where Honey Buzzards are found. After a 30 minute stake-out we never saw a single raptor and it was quite chilly in the breeze, we did see Swallow, House Martin, Goldfinch, Greenfinch, Bullfinch, Yellowhammer, Skylark, Crow, Magpie and dozens of Wood Pigeons but not a single raptor. 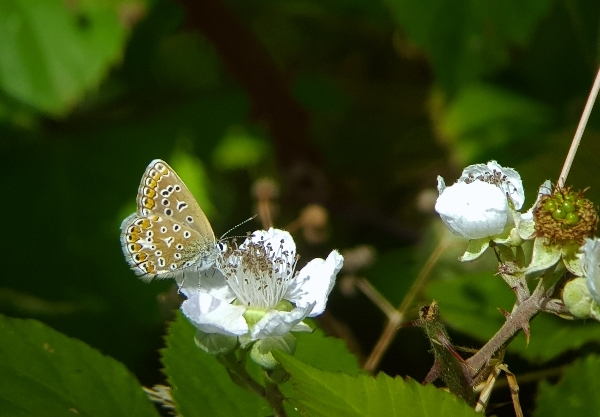 Our next stop was at the RSPB Lychett Fields Reserve near Poole Harbour. A couple of view points in the middle of the fields allow you to scan the tidal Marshes. Before we reached the view points we stopped to watch the prolific insect life along the hedgerow of the main track. 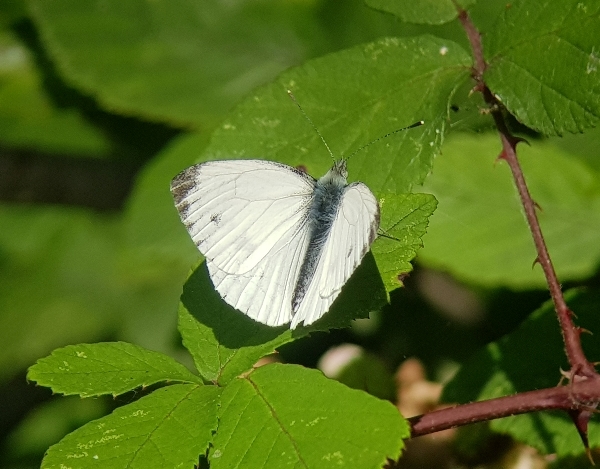 Many butterflies were on the wing in the bright sunshine, a plethora of Gatekeepers and Meadow Browns were joined by a host of other species. Green-veined White, Comma, Peacock, Red Admiral, Brimstone, Large White, Small Copper, Small Skipper, Lulworth Skipper, Common Blue and high up in the oak trees we saw a couple of Purple Hairstreaks. 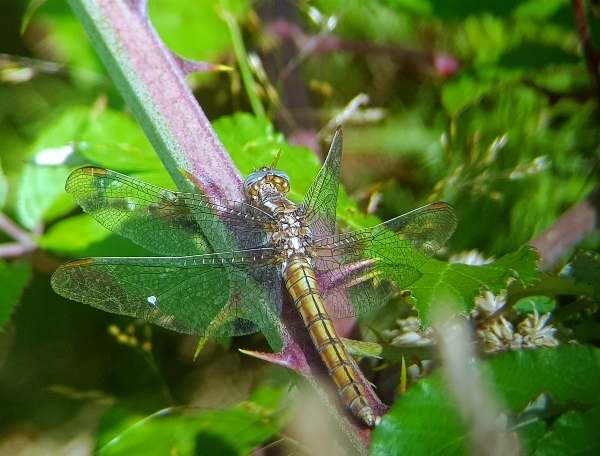 I think this is a teneral male Common Darter

Dragonflies, Damselflies, hoverflies, bees and interesting flies were in abundance we were like kids in sweety shop.

Finally we turned our attention towards the Marshes where we picked out a few species of birds. The tide was low so many birds were feeding out in the harbour and not on te marsh, very few were in view. Several juvenile Black-headed Gulls were joined by a single Little Egret and a single Black-tailed Godwit. The godwit looked moribund and unwell, we were sure it was on its last legs. 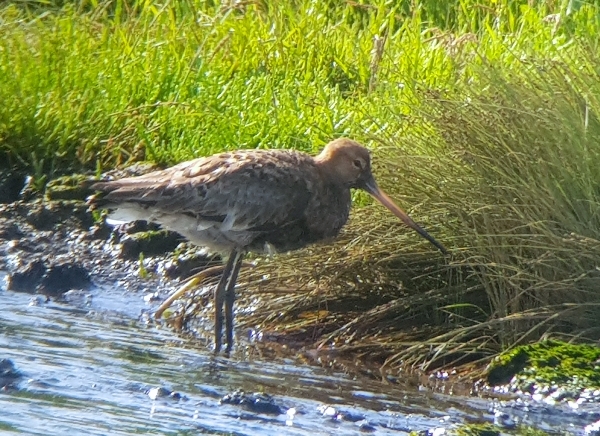 an ill-looking Black-tailed Godwit - maybe a little oiled too?

We ran the gauntlet of the butterfly hedge on the way back but managed to drag Richard and his camera away.

After  a quick stop at a shop in Wareham we made our way down to the heathland at Hartland Moor NNR where we went for another short walk. We were hoping to see Silver-studded Blue butterflies but it was far too windy. We did however see a few birds including: stonechat, Linnet, Greenfinch and to our great delight a juvenile/female Dartford Warbler.

We then drove round to the track to Middlebere and in the car park we ate our lunch. The wind had picked up as we walked to the bird hide at Middlebere, along the way we saw a few butterflies but it was bereft of birds. Richard may have had a glimpse of a Marsh Harrier but no-one else saw it. 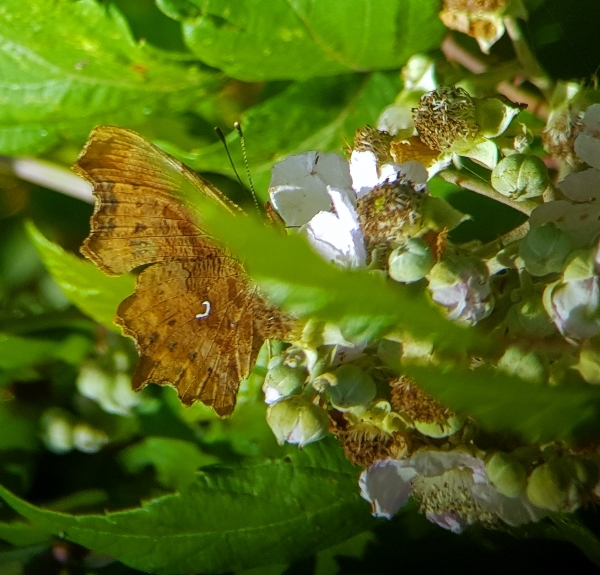 you can see the distinctive punctuation mark on the underside of the wing, giving this butterfly its name, Comma

From the hide we had views across the Middlebere 'Lake' (inlet) which was rapidly filling up as the incoming tide progressed. We saw a small number of waders, namely; Curlew, Greenshank, Redshank and Black-tailed Godwit. Shelduck, Little Egret, Common Tern and lots of Black-headed Gulls were also present. The best bird on show was  a Eurasian Spoonbill and we also saw a doe Sika Deer. 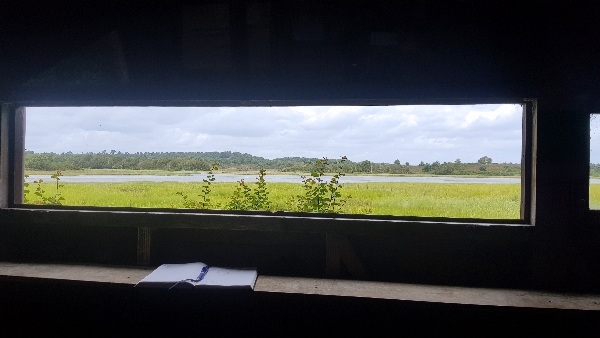 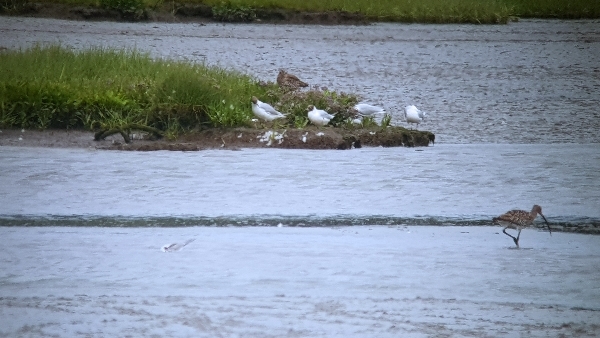 a picture from the hide of Curlew, Black-headed Gulls and a Common Tern (the latter is barely visible in the water)

Walking back to the car we added one more butterflies to our list and we saw several dragonflies. Marbled White g was the new addition to the butterfly list.

Our next venue was the RSPB Reserve at Arne, it was a five minute drive from where we were. After parking in the new and expensive car park (£7 for non-members) we spent a little time watching the feeders in the old car park. Siskins, Greenfinches, Chaffinches, Goldfinches joined Blue and Great Tits feasting on the bird seed. 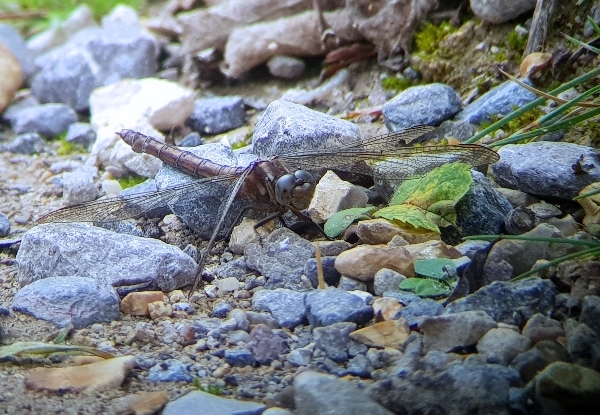 another unknown dragonfly, seen on the track at Middlebere

We saw a couple of Common Lizards on a log before walking along the lane where we searched for Firecrest, of which we saw zilch. After a nice ice-cream in the cafe gardens we set off for our last destination of the day,

We started  the day looking for a Honey Buzzard near Wareham Forest and that is where we ended up, the sky was clear and we were hopeful of seeing something even though it was late in the afternoon. After a sort wait we spotted a Raven in the distance, it drifted much closer before flying off. We had two or three sightings of two different Common Buzzards and our last sighting was of a Sparrowhawk. The usual Yellowhammers were singing and finches were buzzing around us but we never saw a Honey Buzzard. 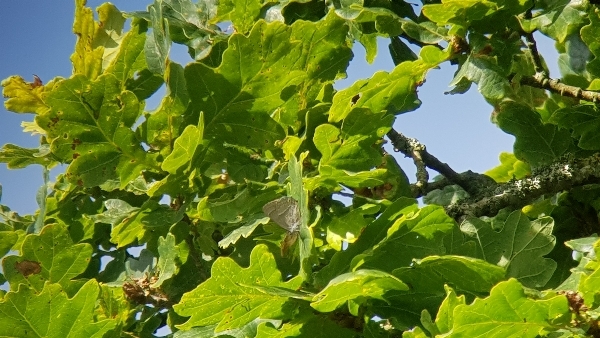 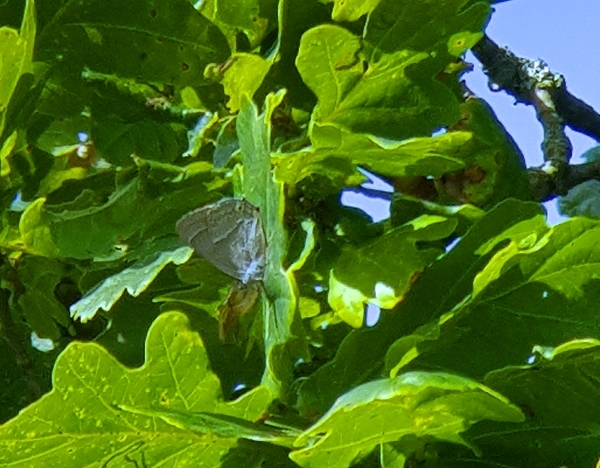 the Purple Hairstreak - also shown in the picture above - did you  pick it out?

We got back to Richard and Linda’s pub-hotel around 4:45pm, it was great to be out with them again I really enjoy their company.

I was home just after 5pm and by 6pm Dawn and I set off for Hitchin, Hertfordshire. We will be ‘furniture removers’ for the weekend as we help our daughter and son-in-law move house – bad back coming up!!!!