Dawn and I left home at 10am and drove down to Uplyme in Devon, we had found a new walk that follows the River Lim all the way to the beach at Lyme Regis. We arrived at 11am in beautiful sunshine, it was so lovely out there. 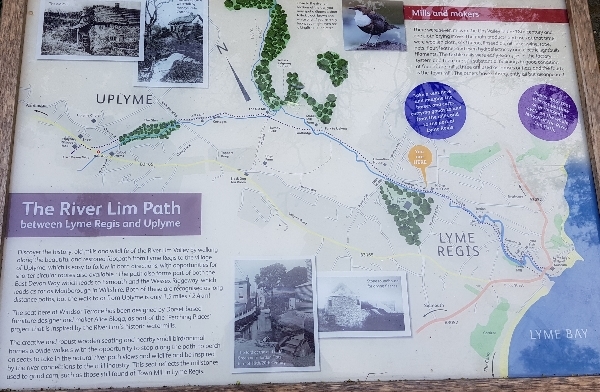 We made one excursion away from the main track when we walked up to the top of ‘Dragon’s Hill’, we expected to have fantastic panoramic views of the coastline and Lyme Regis but there wasn’t one. 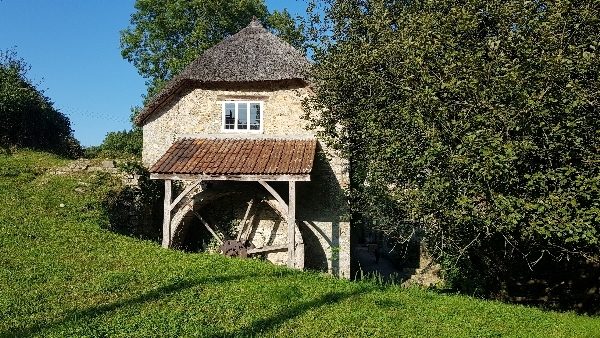 an Old Mill found along the River Lim

Along the River I expected to see Dipper but one never appeared, we did see Grey Wagtail, Robin, Wren, Blackbird, Dunnock, Blue Tit, Great Tit, Song Thrush, Jay and we heard a Nuthatch. 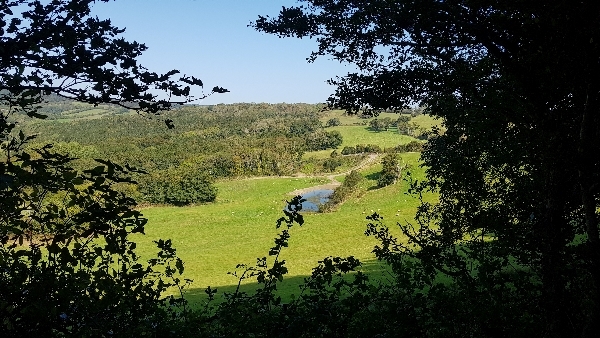 view as we walked up Dragon's Hill.

Once in Lyme we bought some fish n' chips and sat on a bench by the side of the River in a lovely garden area, almost at once a Dipper flew in and land not 5 meters away from us. Wow, what a little beauty, I took a few pictures through my binoculars using my phone, but the bird would not keep still, hence the dodgy photo. 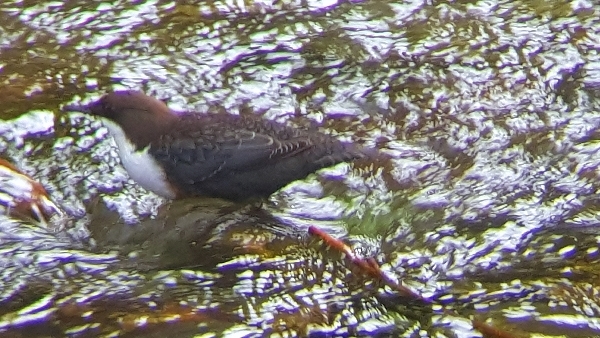 We spent all afternoon on the pebble beach, one of us went to sleep for an hour or so and it wasn’t Dawn. From the beach we saw Cormorant, Shag, Oystercatcher and all three species of the big gulls, also a Kestrel flew along the beach and a Herring Gull snatched a sandwich from a woman’s hand nearby! Such fun! 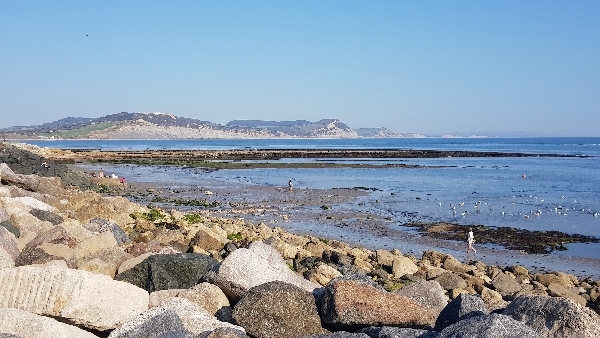 view from our position on the pebble beach

The walk back to the car was uneventful, we did see Grey Wagtail again but not the Dipper.

I managed to get up early for a change and left home at 7am for the short drive to Lankham Bottom which is found on the side of the A37 towards Dorchester from Yeovil. I was walking across the top of the steep escarpment when the sun came over the top of the ridge, it was quite spectacular. 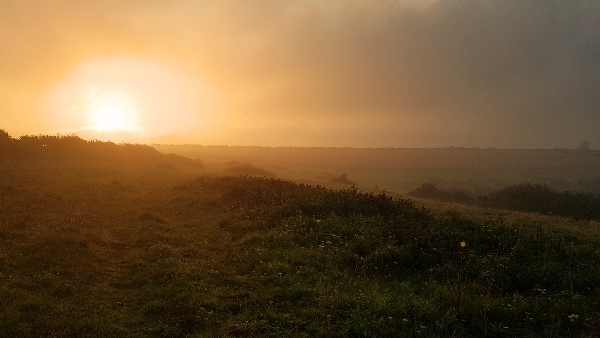 Many Linnets and Goldfinches were flitting about as well as fewer Yellowhammers and Meadow Pipits. I spent most of my time scanning the hawthorn scrub in the hope of seeing an early Ring Ouzel on passage but all I saw was quite a few Blackbirds and one Song Thrush. 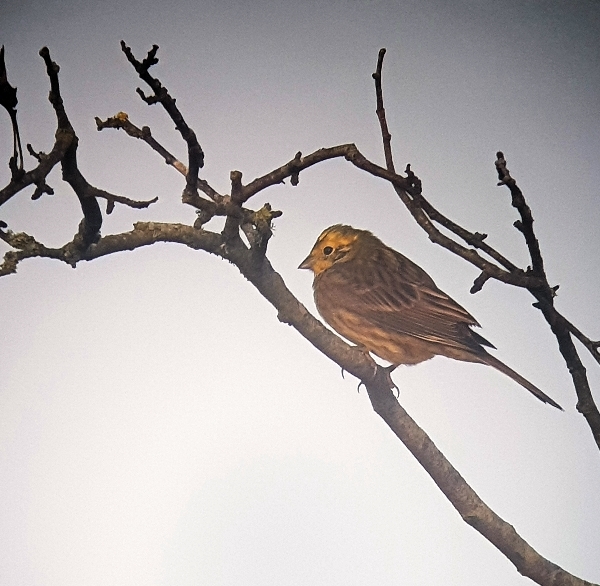 A family party of Stonechats flitted on the gorse and several of the ‘released’ Pheasants and Red-legged Partridges took off from the grass. I saw at least 20 Blackcaps in the berry trees with a few Chiffchaffs, I also saw a fly-over Great Spotted Woodpecker, a Jay, Kestrel and Common Buzzard. A few Barn Swallows flew past heading south and lots of corvids moved from field to field including some Rooks, Jackdaws, Crows and Ravens. Before I left I had a close encounter with a pair of Hares, so obliging and/or oblivious of my presence. 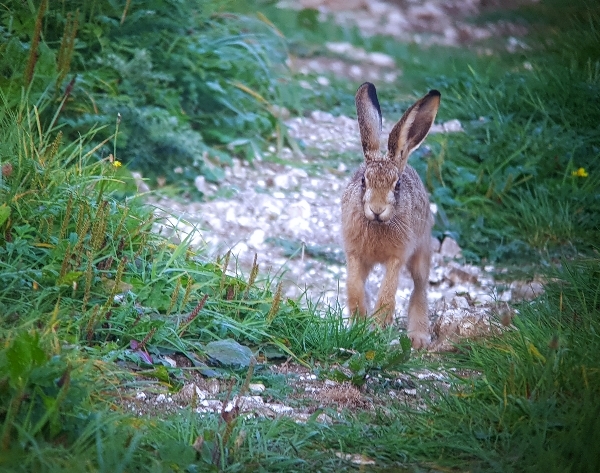 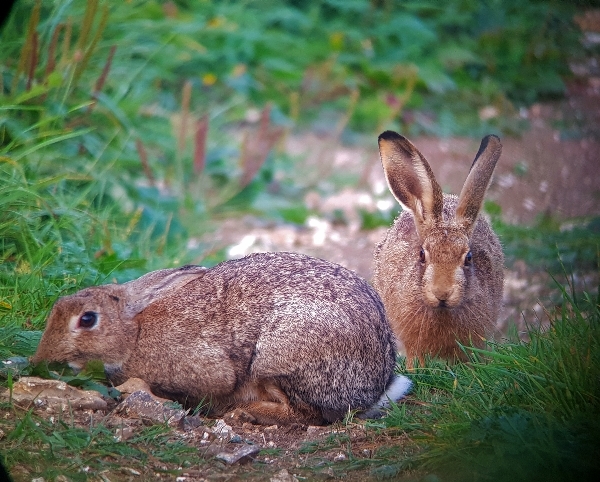 At the exit gate I had a chat with the local gamekeeper who informed me that Grey Partridge had bred in the area as well as Woodcock and Little Owl. He told me that Red Kites were often seen on the carcasses of the Pheasants, some birds to look out for in the future. He also mentioned that they had released over 4000 game birds in the valley and expected that only 30% of them would get killed by hunters!