Dawn and I decided to visit one of our favourite places Lyme Regis, but with a differnce, this time we headed out at 3pm instead of the usual 9am.

It was a little cooler at that time and less crowded, we parked in the usual place at Uplyme and followed the lovely walk along the River Lim (Lym) to the beach. We had a great sighting of Dipper, this adult bird was very close but did not stay long enough for a photo, we also saw Grey Wagtail and the usual common garden birds.

Several butterflies were on the wing and we also saw Golden-ringed Dragonflies and a few Common Blue Damselflies.

We collected our Fish n Chips at 5pm and walked back to the river to eat them, we sat in the shade of some trees whilst sitting on a superbly positioned bench at the riverside.

We then walked along the seafront and after stopping for a quick tea/coffee (we sat in deck chairs whilst embibing our drinks - just like old fogies) we headed to the Cobb. 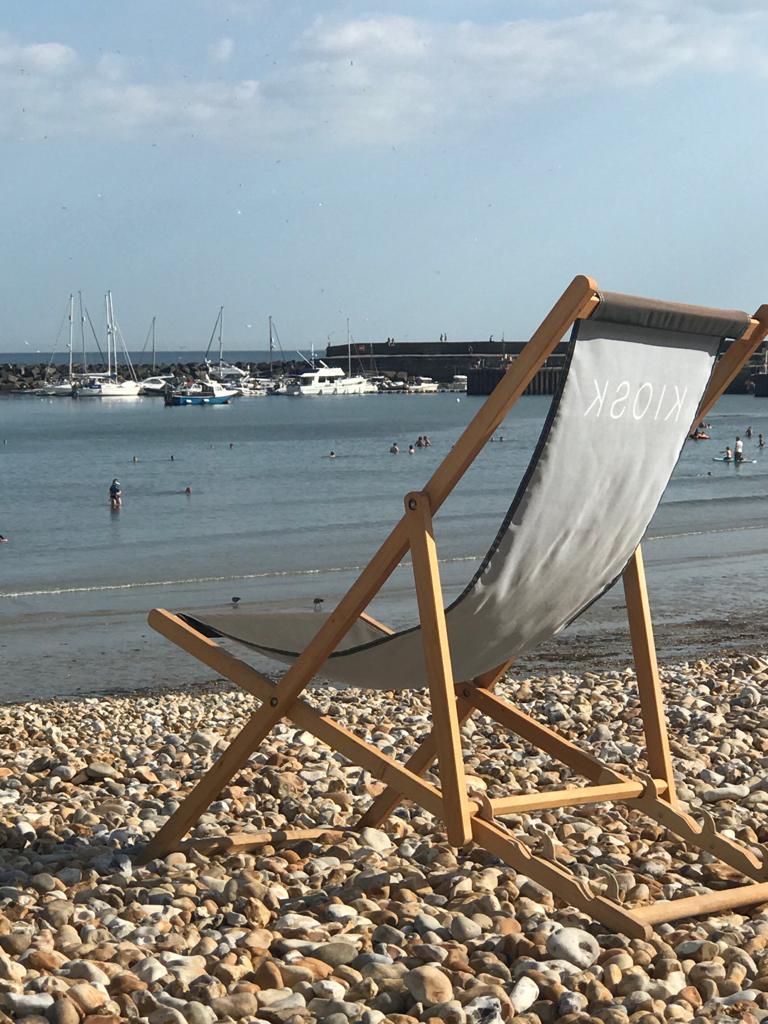 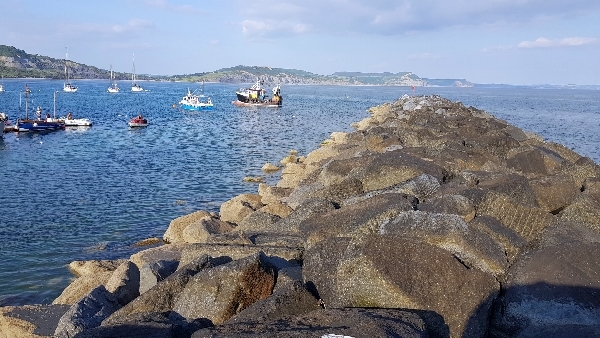 The extension to the Cobb, is a magnet for roosting birds and hosts a flock of Purple Sandpipers during the winter

we then walked along to the Harbour wall which is called the Cobb, no-one knows why? This large man-made concrete construction protects the harbour and has exsisted in some form since 1313!! You can walk along the top of it to view an extension of concrete blocks which extent a further 100 meters or so, it is on these stones that a few birds seek shelter during high tides and stormy weather. 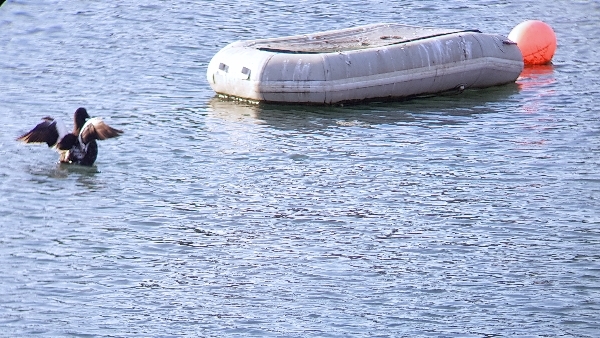 The male Eider Duck is now a resident bird, I think this is its third year at Lyme Regis, it should be hundreds of miles north breeding in Scotland or further north.

Today on the rocks I saw a single Dunlin some Herring and Great Black-backed Gulls,a few Cormorants and a second wader which was too far off to identify, it looked like a juvenile Redshank but I couldn't tell with just my binoculars. 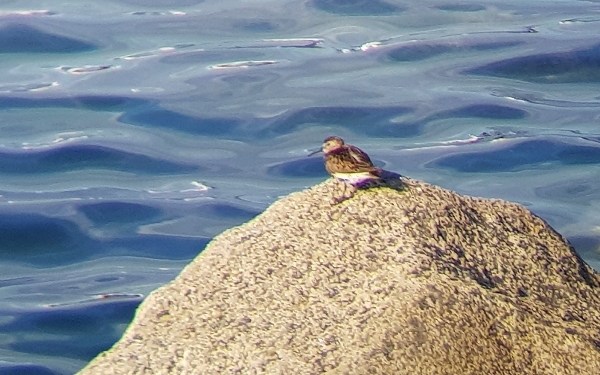 the single Dunlin on the rocks on the Cobb  extension 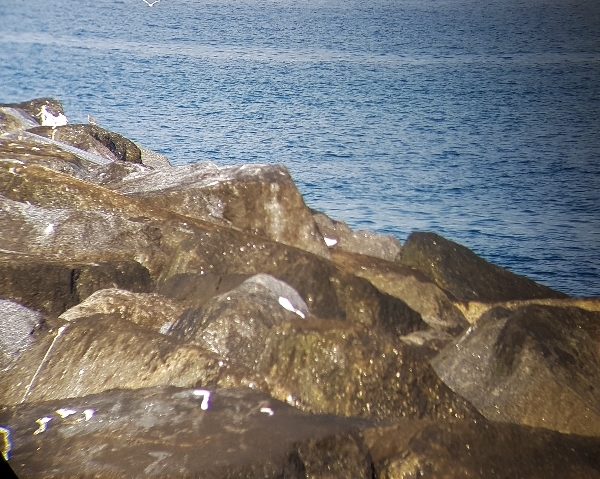 There was a second wader on the rocks, it is shown here, I could not make out what it was, this picture was taken through my binoculars!!

It was around 7pm when we walked back, our only sightings were off Grey Wagtails, Pied Wagtails, Rock Pipits and more Gulls, one of which was a Mediterranean Gull, the first time I have seen one in Lyme Regis.

We spent two full days on the pebble beach at Cogden, two lovely relaxing, lazy days, reading, sleeping with some walking,  it was just bliss.

On Saturday it was a little breezy and we were pestered by tiny flies for a while but otherwise it was perfect. We were joined by Celia, Dawn's sister for most of the day, she went swimming a couple of times but it was too cold for us. 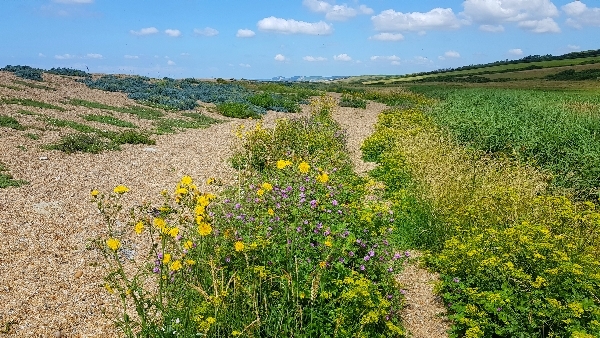 the flowers on Cogden Beach are amazing at the moment

I went for a walk from Cogden to West Bexington and got my 10,000 exercise steps logged in my Tracker App. I saw quite few butterflies but was disappointed not to see a single Clouded Yellow, or a Painted Lady and the number of Small Skippers was very low. I saw Common Whitethroat, Common Stonechat, Skylark, Linnet, Goldfinch, Reed Bunting, Reed Warbler and a Common Kestrel. 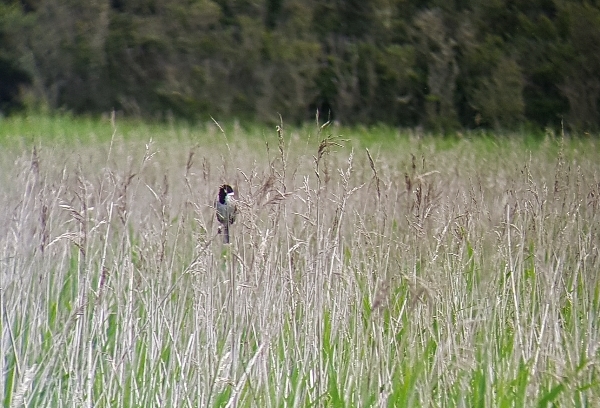 male Reed Bunting singing from the reeds at Cogden

I was amazed that the Common Whitethroats were still singing and performing their flight displays, so were Skylarks and both the Reed Bunting and the Reed Warbler were still in song. 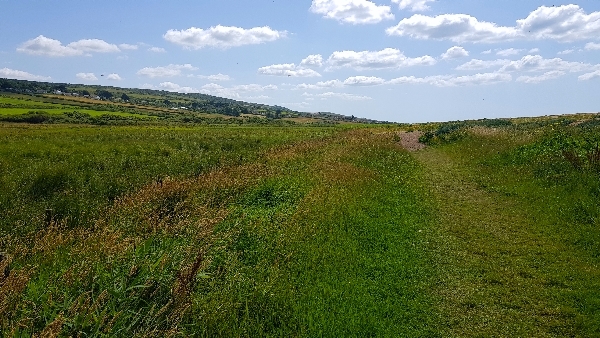 We left the beach around 5pm just as many people were arriving!! Lots of people spend the night fishing and camping on the beach at Cogden.

Today was even warmer aand we repeated yesterday's day on the beach. It was magicasl down there, the air was absolutely still I have never seen the sea so flat and calm, hardly a wave broke on the shore. The air was crystal clear you could see for miles, Portland to the east was easily picked out. 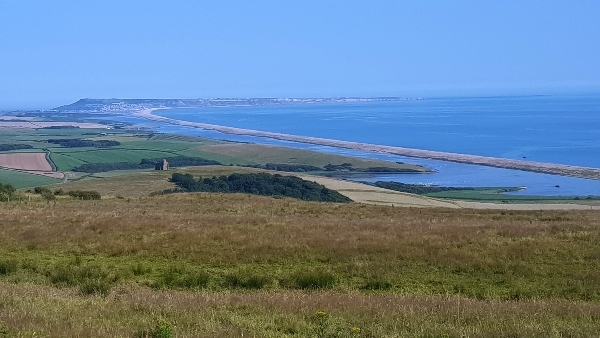 this is the view from Abbotsbury Hill, looking eastward you can see Chesil Bank, the full length of the Fleet (8 miles of briny water) and Portland. In the nearest section of the Fleet you can see Abbotsbury Sawannery with a 'herd' of Swans in view.

Miraculously the plague of flies from yesterday disappeared it was a serene and tranquil bliss. I noted Sandwich Terns, a flock of ten Oystercatchers and usual trickle of Herring and Black-headed Gulls, the odd Cormorant dashed by too. 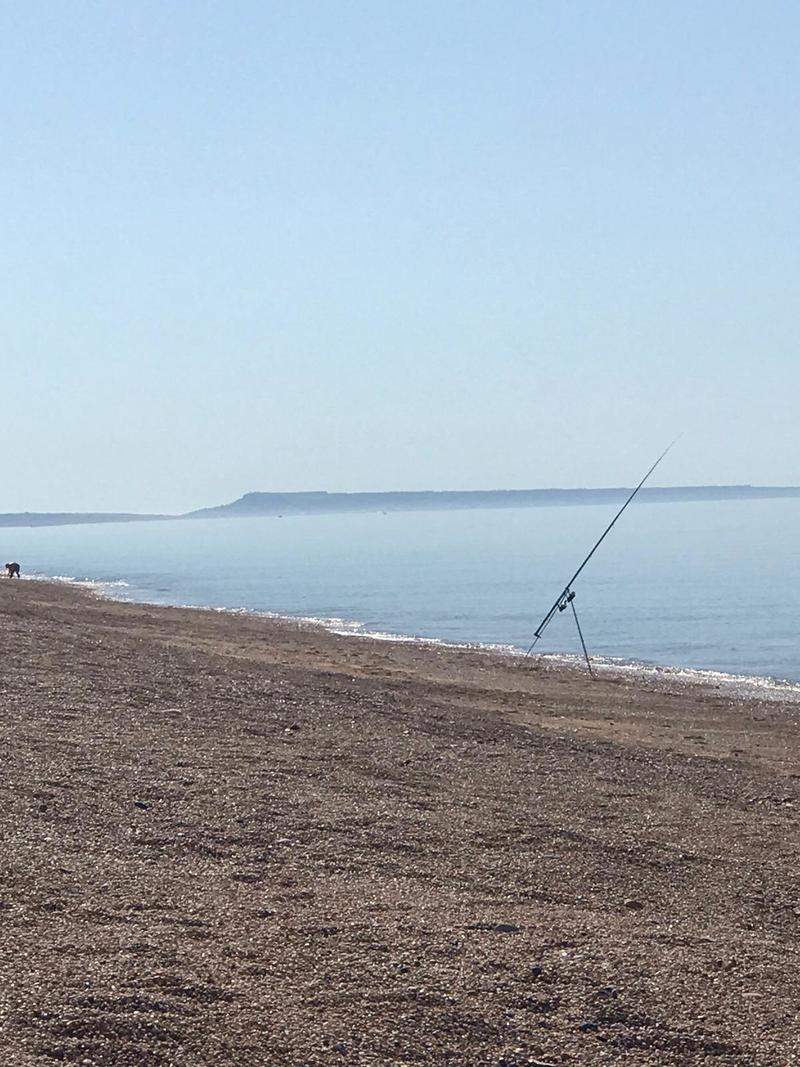 a flat, calm sea with Portland in the distance, taken by Dawn

I never went for a walk but I got into the sea, only up to my knees, ha!! At 3pm we were joined by Celia and a couple of her friends and by 5;30pm we set off back home, regretably we had not brought enough food or drink otherwise we would have stayed until dark, maybe next time. 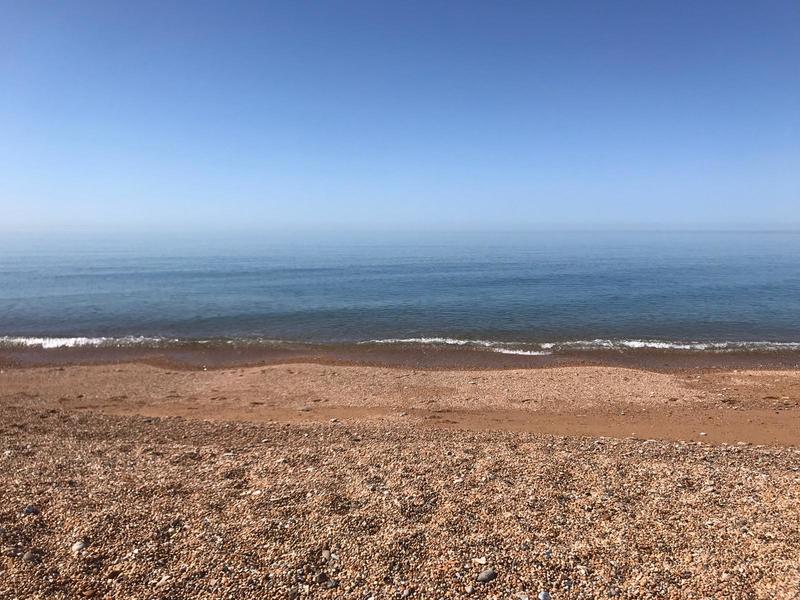 Hardly a wave on the sea at Cogden, taken by Dawn