Today we were joined by Lis who came out with us just for the day. We got up early and left Tarifa at 7:15am when we drove to Gaucin, noting our first Jays of the trip along the way. On arrival we went straight into a venta for some breakfast.  We then met Lis at 9am, Lis was joining us for a day out. We all set off for Ronda heading for the Encinas Borrachas Track. 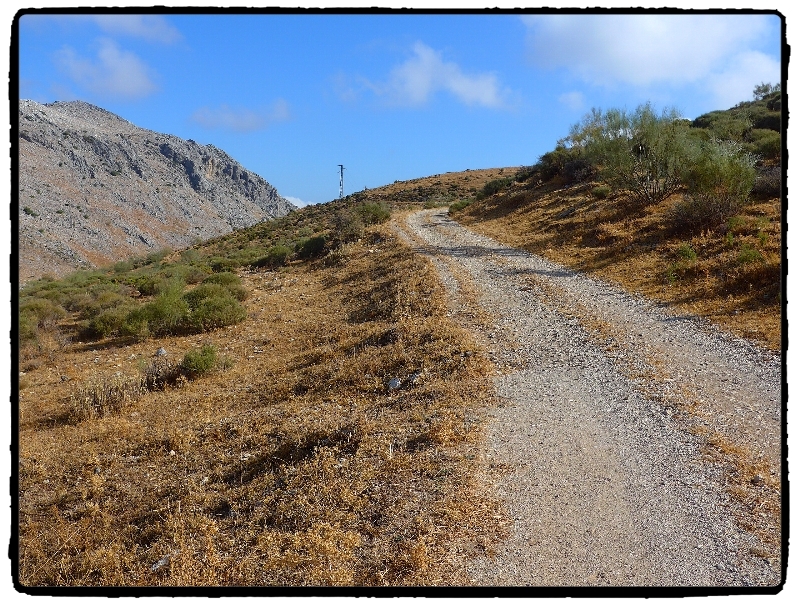 We saw a few species along the way but not many because most places were shrouded in mist especially the valleys. Our first stop was not far passed Atajate (the smallest white village in Andalucia) we pulled over and scanned from the side of the road. Linnets and Goldfinches were dashing about and then we found two or three Blue Rock Thrushes just before I found a star bird – ROCK THRUSH – but before anyone else got onto it, the bird disappeared over a ridge. 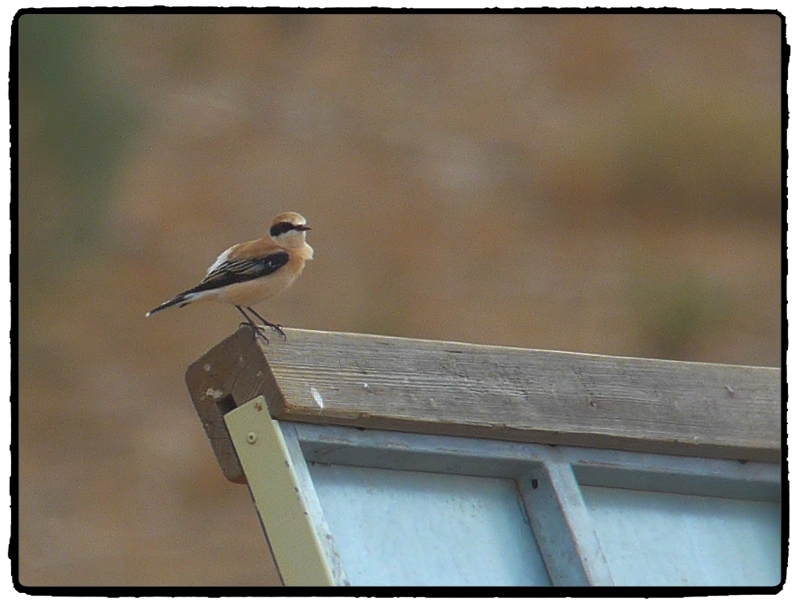 From there we drove a short distance to the Encinas Borrachas track which was free from mist and just starting to warm up. Some of our first sighting were of a family party of Black-eared Wheatears, the adult male looked superb in the morning light. Rock Sparrows appeared briefly before we a small flock of Thekla Larks and a few Stonechats.

Next came a very surprising find in the shape of a WRYNECK this bird first appeared half-way up a pylon, it was the first one ever recorded by me in this most unusual habitat. The discovery and subsequent good views of a Spectacled Warbler seemed under-whelming after that. We then logged both Woodchat and Southern Grey Shrikes and by the time we got to the heathland raptors started to appear over the distant ridge.

First a Montagu’s Harrier drifted along the ridge then a few Griffon Vultures, a Booted Eagle and a couple of Short-toed Eagles. Then to our great delight we noticed small kettles of Honey Buzzards, a string of birds came from the north and we counted over 100 in a short space of time. 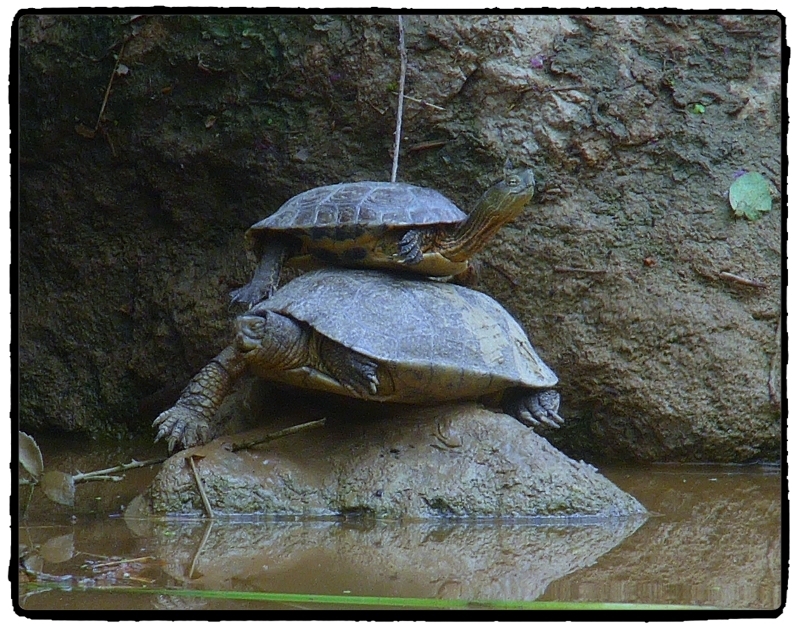 After that excitement we walked back to the car, finding the Wryneck and Spectacled Warblers again and just before we left we enjoyed the Black-eared Wheatear and we found a couple of Northern Wheatears.

By the time we reached our next venue it was time for lunch so we stopped at a roadside restaurant and sat scanning the sky for raptors as we ate lunch and drank coffee. We again saw over 100 Honey Buzzards and good numbers of Bee-eaters, Booted and Short-toed Eagles, a single Egyptian Vulture and several Black Kites were also noted.

The Sierra de las Nieves Natural Park was where we spent most of our afternoon, the open area near the entrance held very little bird-wise, we found Woodlark, Chaffinch and a male Common Redstart. Further along the track we enjoyed watching a mixed feeding flock with Crested Tit, Firecrest, Orphean Warbler, Bonelli’s Warbler, Blue Tit, Great Tit and Willow Warbler all being noted.

In another open area much further along the track we watched Black Wheatears and a bunch of Redstarts contain both Black and Common, I have never seen this before and tried hard to photograph the two species together, but failed. Ravens, Common Kestrel and Griffon Vultures were all we saw skyward and a sortie further up the track produced nothing. On the way back down we stopped to watch a pair of Rock Buntings, they flew up from the track and were very elusive after that. 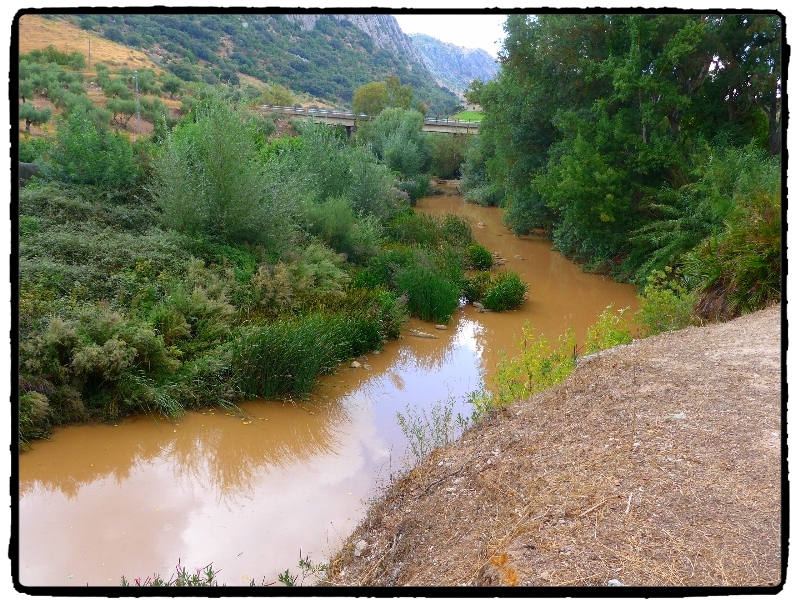 the Rio Guadiaro full of mud and silt after rain

For our late afternoon birding we visited the Cueva de Gato near Benaojan, from this impressive cave a beautiful waterfall cascades into a marine-blue pool, an idyllic setting and usually good for Dipper and Grey Wagtail. But not today, it was fairly crowded with Spanish Tourist and their dogs. We quickly left and walked down to the train station at Benaojan, the water of the main river was full of brown silt, this must have followed heavy rain upriver. 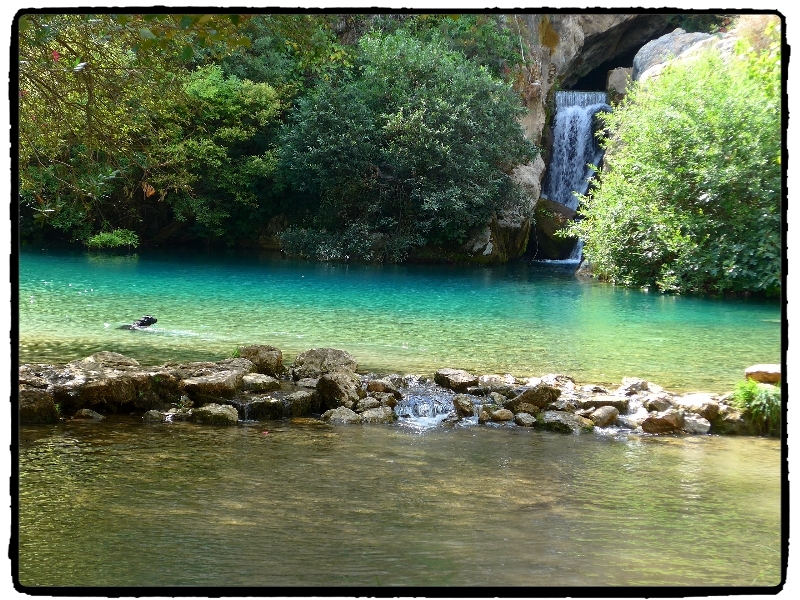 We had glimpses of Grey Wagtail but no Dipper even after we searched a sparkling mountain stream near Benaojan, we found Grey Heron, Blackcap and a few Crag Martins but not much else. We finished the day by having dinner at my house in Gaucin. Dawn cooked a lovely vegetable Tajine, it was tough driving back to Tarifa after that!