It is not surprising nor is it a coincidence that Cornwall has recorded one of the highest counts of bird species in the whole of the UK. Situated in the far south-west corner of England, stretching out into the Atlantic, and surrounded by hundreds of miles of beautiful coastline Cornwall is an ideal place for migrating species to stop and rest a while. Many rare and interesting species are often blown off course or have over-shot their intended destination and put down to seek food and shelter for a short while. 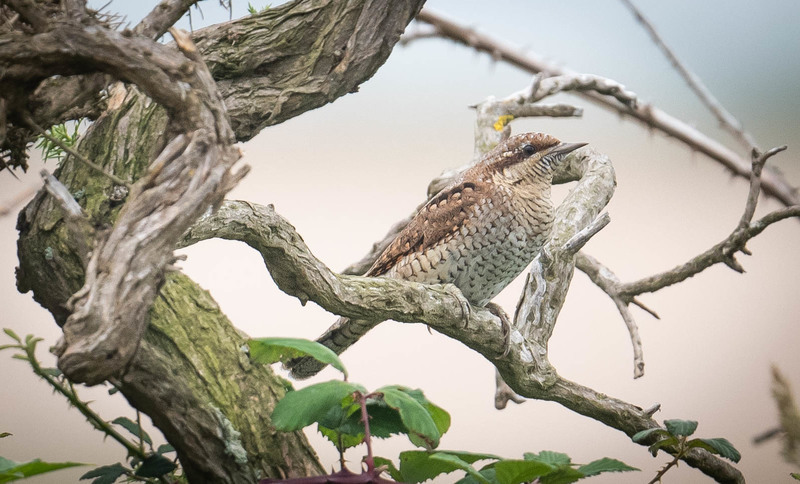 Cornwall also boasts the mildest climate in the country with a vast range of habitats ranging from steep, rugged cliffs to secluded coves, from remote moorland to fertile valleys.

It is the valleys that give us the most hope of seeing and maybe finding rare vagrants and uncommon migrants. Wryneck, Common Redstarts, Pied and Spotted Flycatchers, Red-backed Shrikes, Richards or Tawny Pipits, Firecrests and Yellow-browed Warblers will be our quarry in the trees and bushes of Cot, Nanquidno, Kenidjack and Porthgwarra. Other species we expect to find at this time of year include Northern Wheatear, Ring Ouzel, Whinchat, Lapland & Ortolan Buntings and possibly a Snow Bunting. 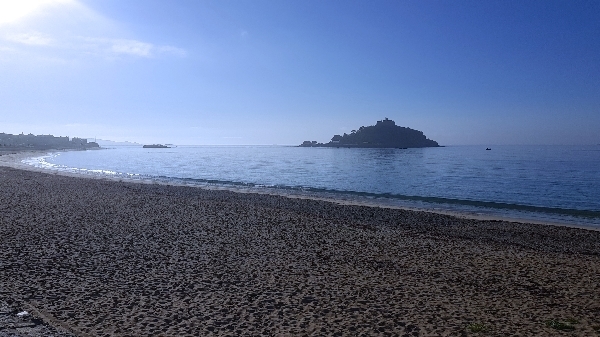 Our real hope is for westerly gales, bringing over American passerines and other land birds such as Red-eyed Vireo, Buff-breasted Sandpiper, American Golden Plover, Semipalmated and Baird’s Sandpipers, Lesser Yellowlegs or even a Neartic species of warbler such as Black and White Warbler!! 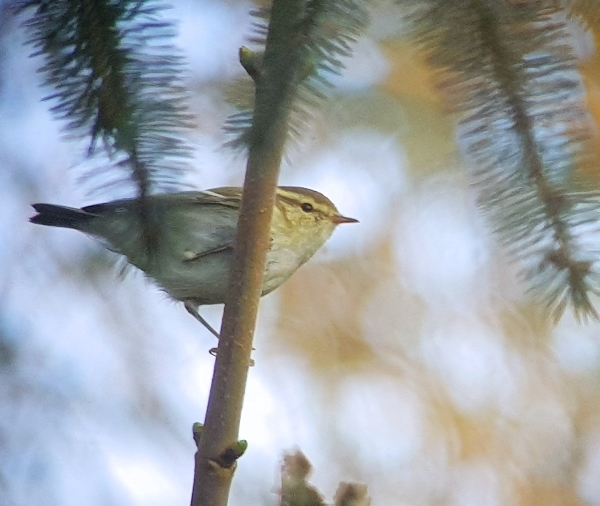 The centre point and main focus for our 7-night migration tour is the Hayle Estuary, our 3 star hotel is just a short drive from there. Our base will give us easy access to many great sites on this southwest peninsular and nowhere on our planned itinerary is too far away. 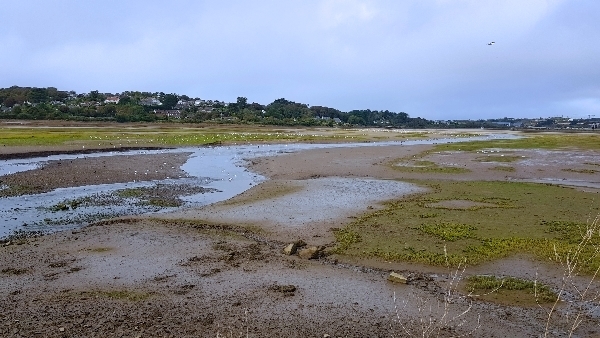 The Hayle Estuary at low tide. During the autumn it is always covered in gulls, ducks and waders

The weather and movement of migrating birds will dictate the pattern of our search for exciting sightings, tidal patterns will of course be a deciding factor when visiting intertidal mudflats along the estuaries.

No set itinerary will be published but rest assured you will visit all of the best sites and many other places. Listed below are the main places on the agenda.

Hayle is the most south westerly estuary in the UK and is home to a wide variety of wetland birds.  This huge area consists of intertidal mudflats, saltmarsh, lagoons and islands, most of it is owned by the RSPB. There is access to Carnsew Pool, Copperhouse Creek, Lelant Water and Ryan’s Field. We shall visit all of these places on more than one occasion. 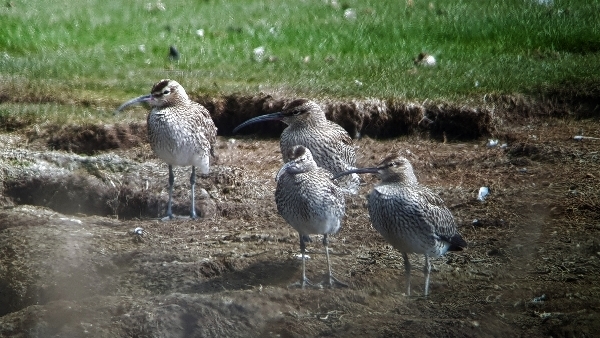 Whimbrel at the Hayle Estuary

A multitude of species have been recorded on or around this wonderful estuary and during September it is waders that will be in the forefront off our searches. 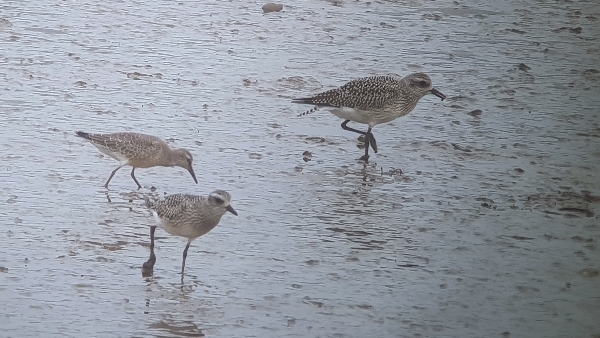 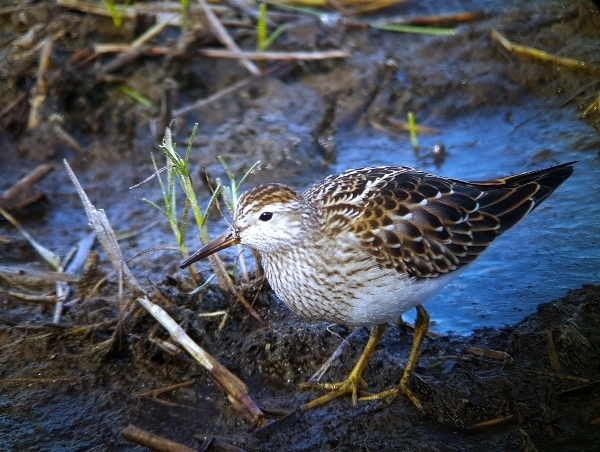 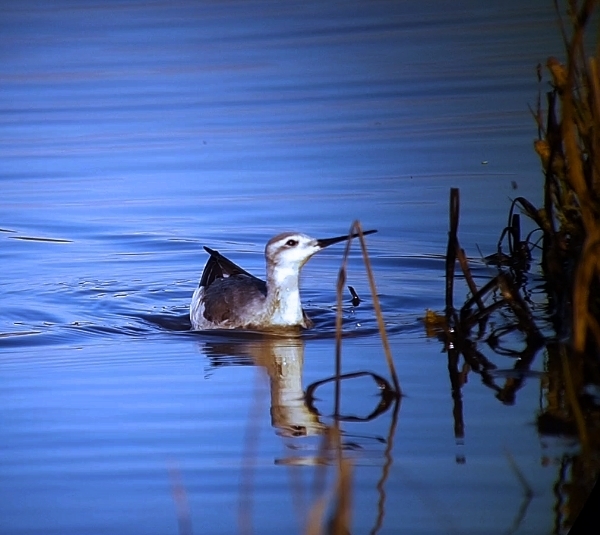 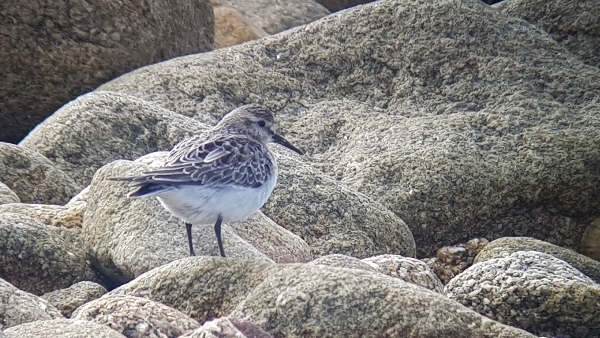 The Hayle Estuary is best known to birders as a stop off point for migrant waders, but the first noticeable species are the Gulls. The larger gulls congregate along the main channel whilst the smaller gulls favour the sandy area at the northern end of the estuary off the west side of Carnsew Pool. The flocks consist of mainly Herring, Great Black Backed and Black Headed Gulls, the numbers in late autumn increase with the build up of Lesser Black-backs and Common Gulls. 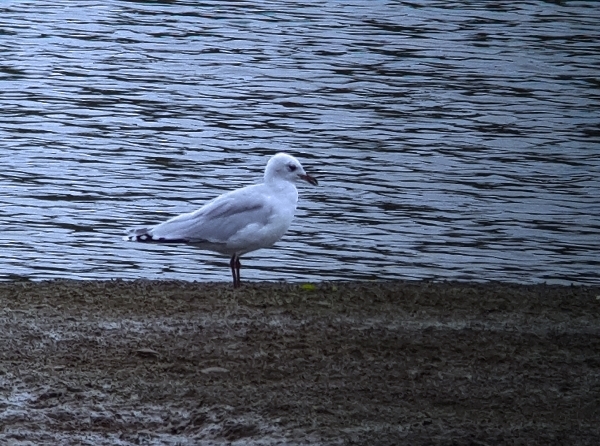 In more recent times, Caspian and Yellow-legged Gulls have become more abundant. Mediterranean Gulls are now a regular sighting, numbers in September are regularly well over the 100 mark. On rare occasions they are joined by the Little Gull. Less common Iceland and Glaucous Gulls are recorded annually each winter. Historically the following gulls have been recorded on the Hayle Estuary: Franklins, Laughing, Bonaparte’s and Ring-billed Gulls, 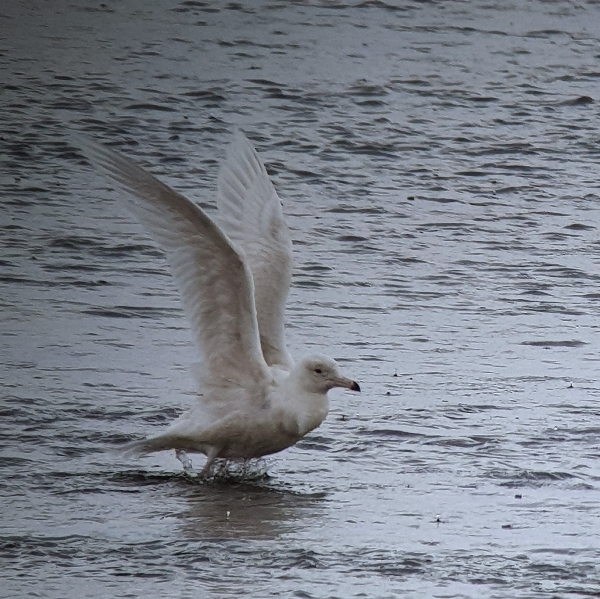 Copperhouse Creek is also famous for a string of rarities, many of which commute between the creek and the main Hayle Estuary. These include: White-billed Diver, Long-billed Dowitcher, Laughing, Ring-billed and Boneparte’s Gull, Lesser Yellowlegs, Least, Pectoral, Buff-breasted and Baird’s Sandpipers, Green-winged Teal and American Wigeon. 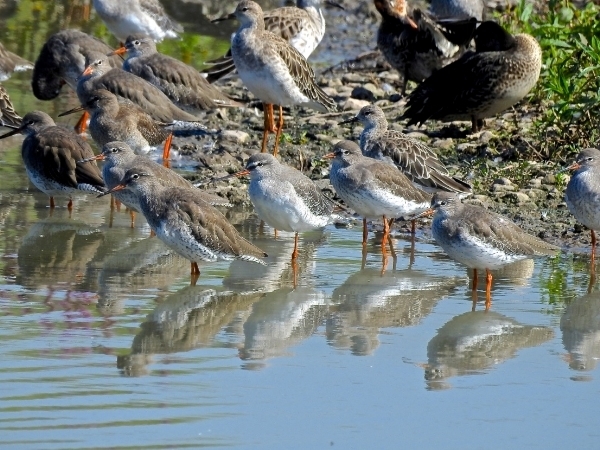 A mixed flock of Redshank and Ruff - there is also a Spotted Redshank in there too! - Hayle Estuary

Just a few miles south of the Hayle Estuary lies Marazion Marsh, it is a small reedbed with marshland and scrub which plays host to a variety of wetland birds and is found just west of the town of Marizion. Over the years, the reserve has become an important wintering site for Bitterns and used to be a regular stopover for the globally threatened Aquatic Warbler, alas very few of the latter have been sighted in recent years. 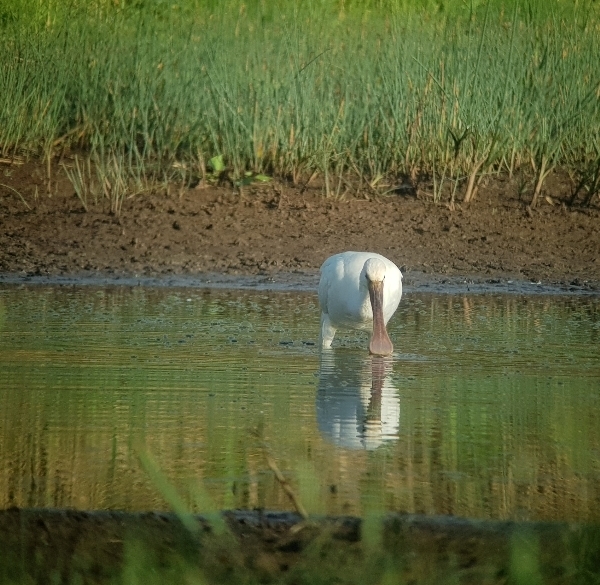 Reed and Sedge Warblers are found in the reedbeds whilst Cetti’s Warbler can be seen and heard in the willow and bramble scrub. Herons, Egrets & sometimes Spoonbills drop in whilst Water Rails and sometimes the rarer Spotted Crake skulk along the edge of the reeds. 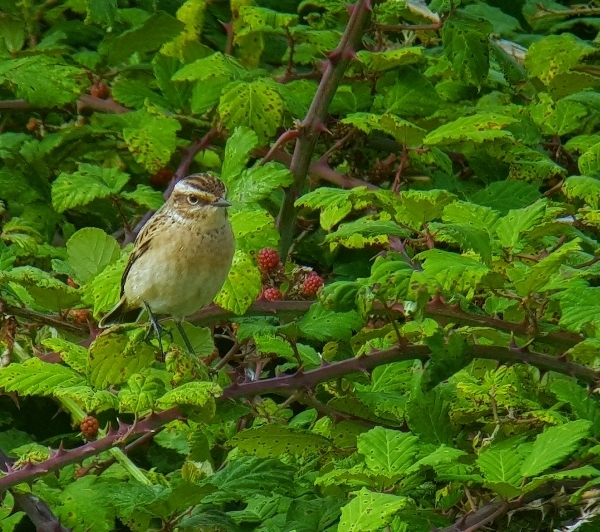 Whinchat a regular sighting on this trip

During September there is a noticeable increase in the number of Starlings that gather in the surrounding trees before descending into the reedbeds to roost. The huge flocks often form spectacular aerial displays (now called a murmuration) before dropping down into the reeds.  As well as the gatherings of Starlings the reedbeds here also make an ideal habitat for lots of wetland birds. More regular visitors are the Grey Heron, Chiffchaff, Sparrowhawk, Buzzard, Barn Swallow and Little Egret. 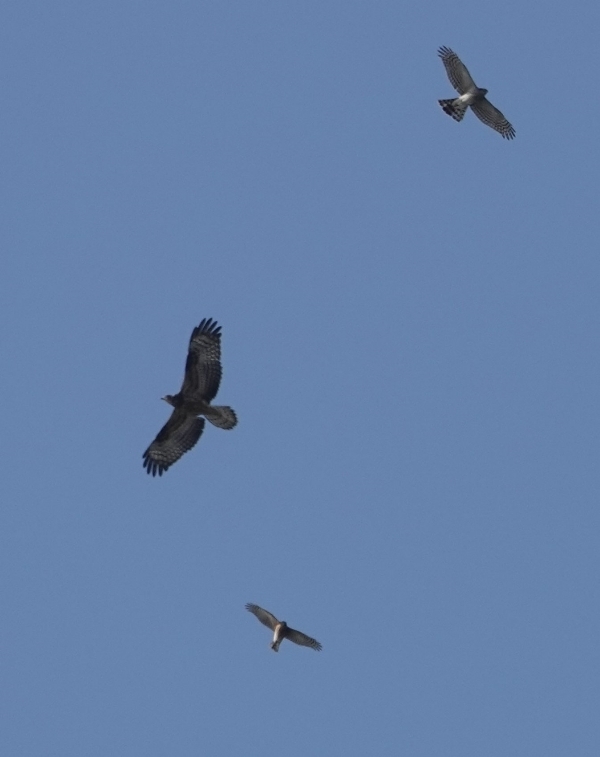 Honey Buzzard and a pair of Sparrowhawks

Nearby sites will receive our attention too, such as St Gothians Sands, Gwithian and Godrevy Point. All these places usually have something to offer to enhance our birding experience of Cornwall.

Very close to our accommodation lies Pendarves Wood, the woodland here is very appealing as no dogs are allowed,  it gets few visitors so it often completely quiet and undisturbed. The wood is managed by the Cornwall Wildlife Trust and owned by The Duchy. The beautiful overgrown lake started its life as an ornamental boating lake and the old boat house is still visible near the hide. You can find all the usual wetland birds such as herons, geese and ducks but our main target species will be the numerous woodland birds such as Woodpeckers, Nuthatch & Treecreepers.

The Valleys we shall visit are Nanjizal, Kenijack, Nanquidno and the Cot Valley. Many a rare and exciting bird species has been found in these migrant havens. 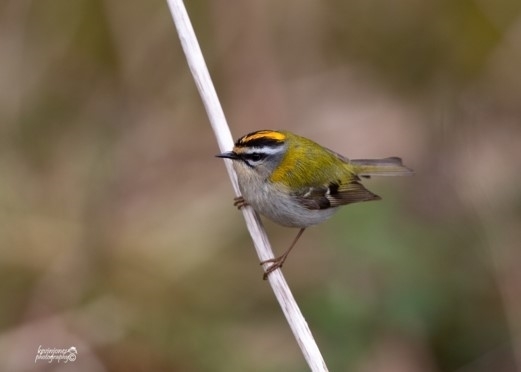 At Pendeen and Porthgwara there will opportunities to scan the sea for passing sea-birds, if the conditions are right we may find ourselves in the midst of a decent passage of Shearwaters (including Manx, Balearic, Cory’s and Great), also Petrels, Gannets, Auks, Skua’s, Gulls and Tern. Many a rare seabird has been seen from both of these places.

At Porthgwarra there are small pools, thickets and open grassland were we can look for Wheatears, Whinchats, Flycatchers and warblers.

Much of the Lizard peninsula is an Area of Outstanding Natural Beauty and for good reason. There are several reserves here too and one of best is Goonhilly Down. The Lizard Point is the most southerly point in Britain and is a stunning place for a walk with a good chance of finding some unusual visitors. 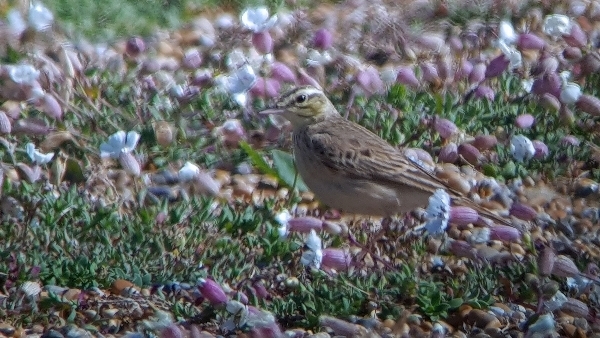 In early 2019 a Black-browed Albatross paid a visit and importantly the area is home to one of the UK’s rarest breeding birds – the Red-billed Chough. Other sightings here include the odd passing Puffin and Razorbill, also Guillemot, Chiffchaff, Wagtails, Wheatears, Hen Harrier and Peregrine.

For this trip you will need to travel to Cornwall independently, you can be collected from local train stations such as Hayle and Camborne or you can drive down and leave your car in the hotel car park. We have a 9 – seater minibus for our birding excursions throughout the week.