Nice weather continues, with high pressure and plenty of sunshine.

On Thursday evening I made an effort to see a Barn Owl at dusk on the edge of Yeovil at the usual site for Woodcock and Snipe.

It was cold but perfectly still and clear, Oli, a local Yeovil birder was also there.  It seemed to take forever to get dark but around 4:45pm a couple of Snipe flew over and then the target bird appeared; a majestic, ghostly, beautiful Barn Owl. It flew over the area for a minute before disappearing just as mysteriously as it appeared. Barn Owling sightings are a magical experience for me, I cherish them whenever they happen. Oli then called out a Tawny Owl and gave me directions to it, but the owl had moved by the time I got onto the tree. Oli stayed hoping for a Woodcock sighting, but I walked back to the car park happy with my Barn Owl sigting.

For a change we had a dull and overcast day, but it was perfectly still and no rain was forecast.

It is now official! Dawn and her sister Celia are conspiring to murder me!! Today they force-marched me from Ham Wall to Glastonbury and then they marched up to the top of Glastonbury Tor. They pushed on ahead of me up the hill and enticed me to follow them by keeping hold of my lunch-time sandwich!!

A double whammy was that I forgot to take my binoculars and/or telescope with me. So I walked across the entire RSPB Ham Wall reserve without my optics, Doh!! All my sightings were ‘naked’ observations and so there were not very many. 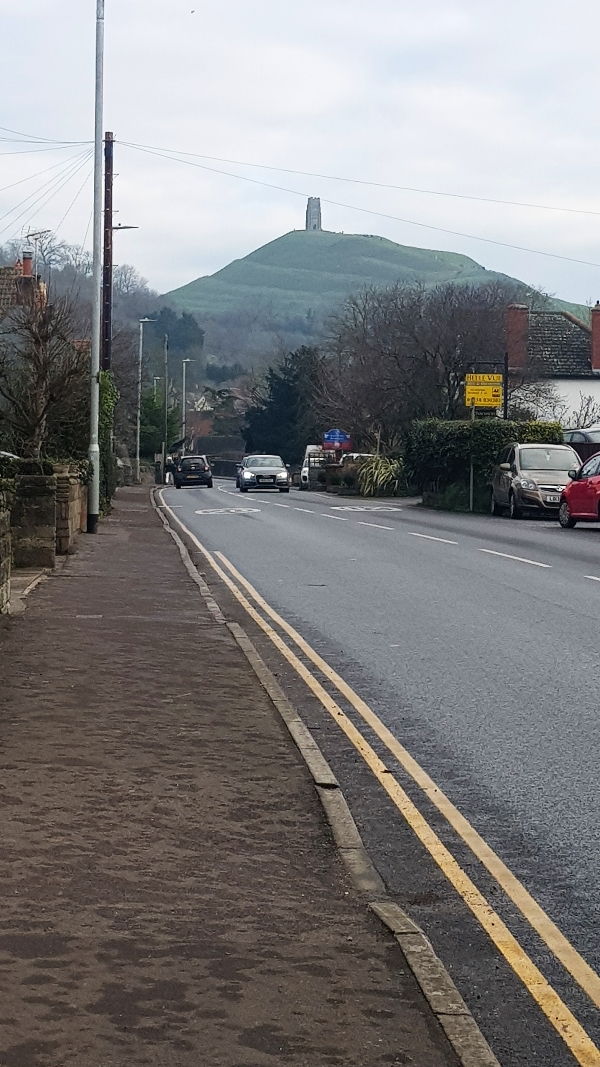 Great & Little Egrets, Grey Herons and all the common duck species were easy to pick out. A couple of Marsh Harriers were seen drifting over the vast reedbeds as we spent short spells at both of the Viewing Platforms. We saw Snipe and Lapwings flying over us and along the track we picked out Goldfinch, Siskins, Redwing, Fieldfare, Great Spotted Woodpecker, Robin, Wren, Blackbird, Dunnock and Song Thrush (singing too!). We heard Cetti's Warbler a few times.

Once we reached Glastonbury we made a beeline to a café before we set off to conquer the 1 mile walk to the top of the Tor. A steady stream of tourists and day visitors joined us on the steep sloping pathway and wooden steps, I stopped numerous times to get my breath whilst Dawn and Celia marched on. 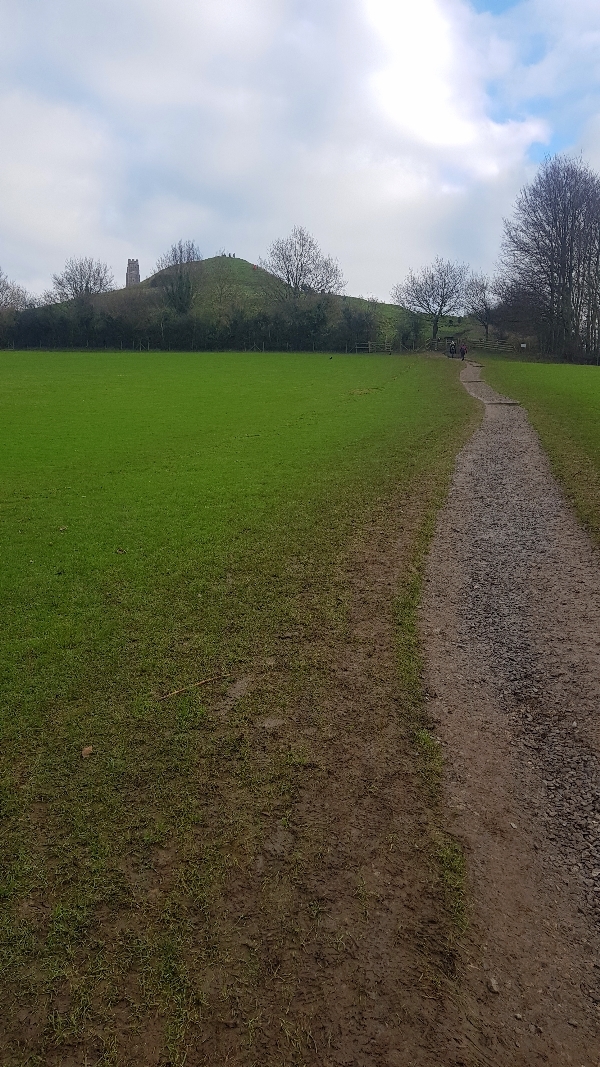 the first stages of the climb

I eventually found them sitting on a bench at the very top of the Tor next to St Michael’s Tower eating their sandwiches. After lunch we walked back down the hill, it took next to no time to get back into town where we searched for Wizards, finding at least 10 candidates in the high street. 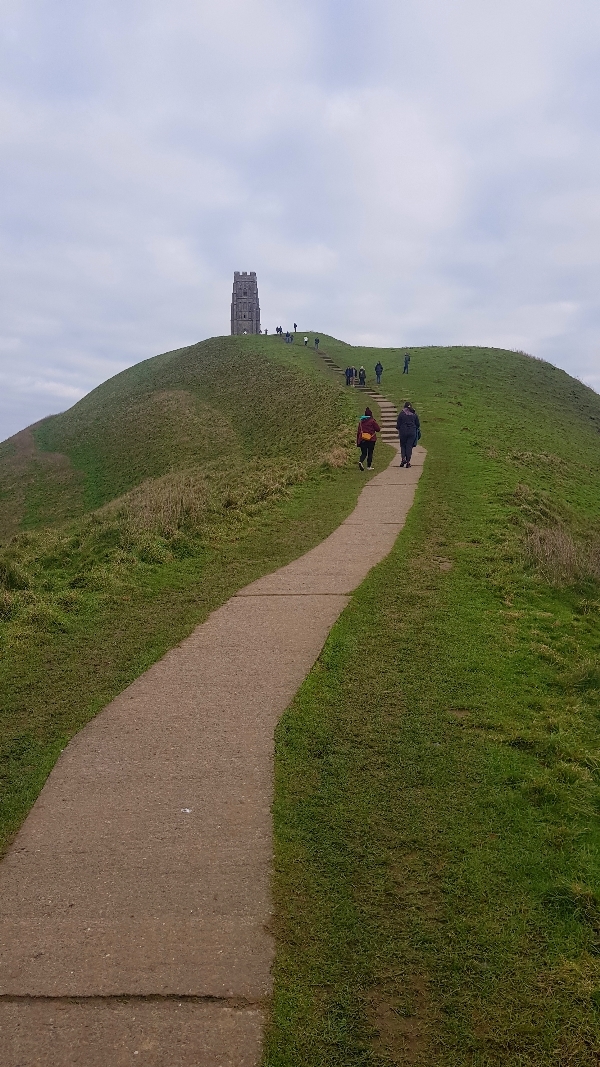 I can see Dawn's white pomp-pomp hat in the distance ahead of me, and my lunch is with her!! 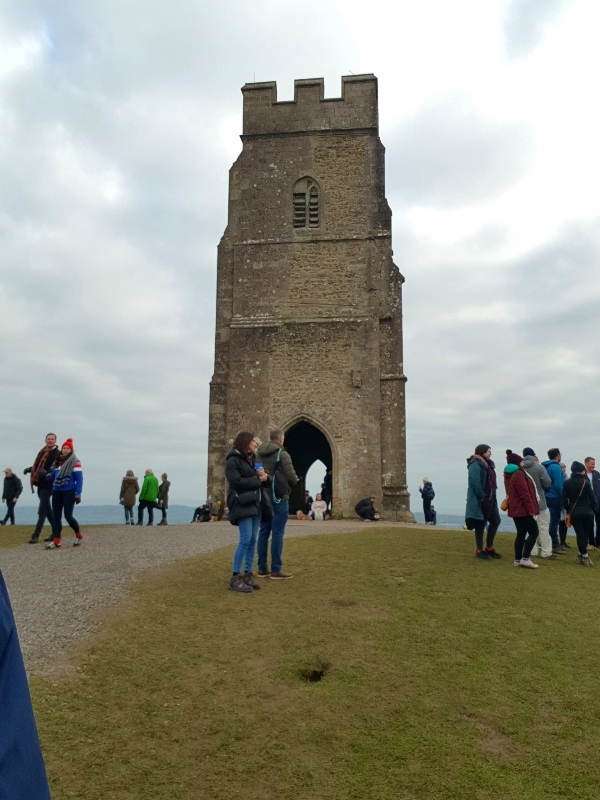 St Michael's Tower at the top 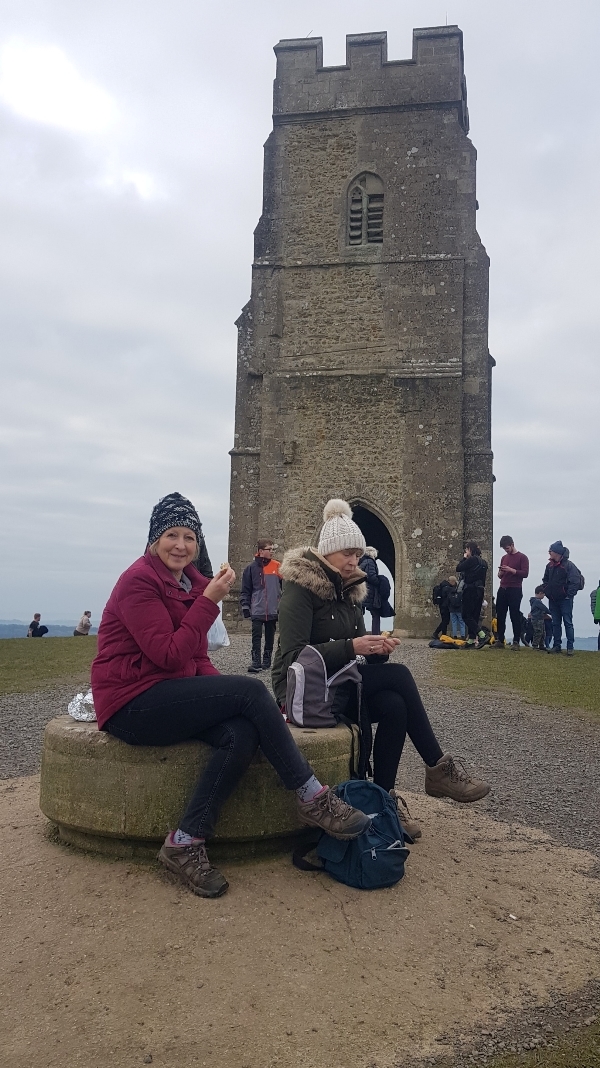 After a second stop in the same café where a second cup of coffee and a lovely piece of cake that was enjoyed by us all, we set off on the return journey.

We got back to Ham Wall just in time to see the Starling murmuration next to VP2. For the fourth time this year the Starlings simple gathered in large flocks around the area and then simply dropped down into the reeds to roost!

Underwhelmed we set off back to the car and drove home, we had covered 9.3 miles (22,000 steps, according to my Step tracker App).

A walk through Yeovil Ninesprings Park.

Mandarin Duck was still missing from my year list and the main Lake in Yeovil’s Country Park was the best place to see them. Before I reached the lake I searched some garden areas where a friend had seen Blackcaps recently, I couldn’t find them but I did see many garden species including a nice flock of Long-tailed Tits.

I then followed the path up to the ‘Springs’ and looked for a wintering Firecrest, the trails were very busy with family parties enjoying a Sunday afternoon outing and it was late in the day, two reasons why my searching proved fruitless. 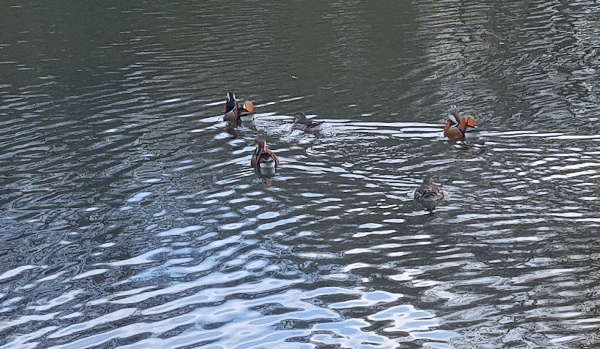 It was another superb, crisp, clear January day. A layer of frost covered the garden and meadow and a clear blue sky greeted us as we rose from our bed. I spotted a Little Egret in the meadow, the first this winter, and beside the Egret was a Moorhen. At one stage we had Red-legged Partridge, Wood Pigeon and Magpie on our fence with Nuthatch, Blue, Great and Coal Tits on the feeders. 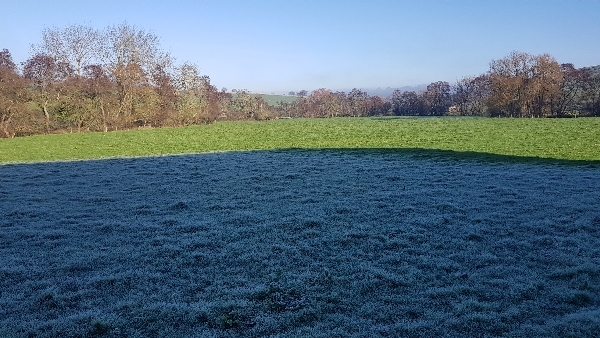 a frosty meadow viewed from our garden 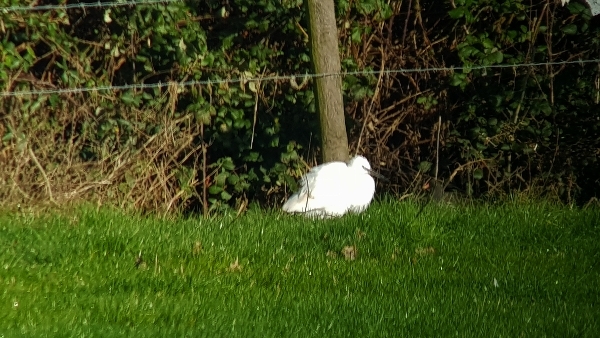 Little Egret in the meadow, can you spot the Moorhen just to the right of it?

Dawn and I decided to go to Weymouth and spend the day walking from Lodmoor to the Harbour and back again, that is exactly what we done and this time I took my bins and scope!!

We parked at the north entrance to Lodmoor and walked along the path through the large reedbed area, a couple of people had just seen Bearded Reedling and so we spent some time searching the area. A pair of Marsh Harriers performed a lovely aerial display and we saw a male Sparrowhawk perched in a nearby tree, but we did not see or hear a Bearded Reedling. 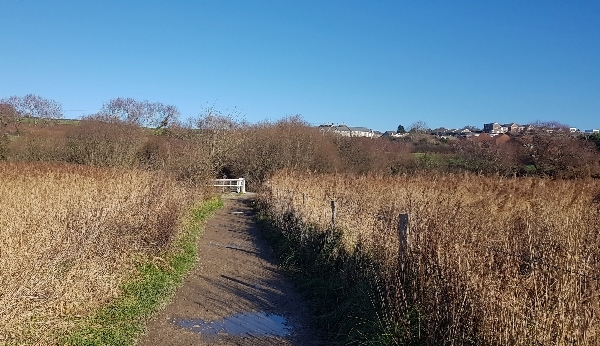 the reedbed at Lodmoor were the Bearded Reedlings had been spotted

Cetti’s Warblers called as we walked along the west track and we saw a pair of Bullfinches just before we arrived at the viewing areas. 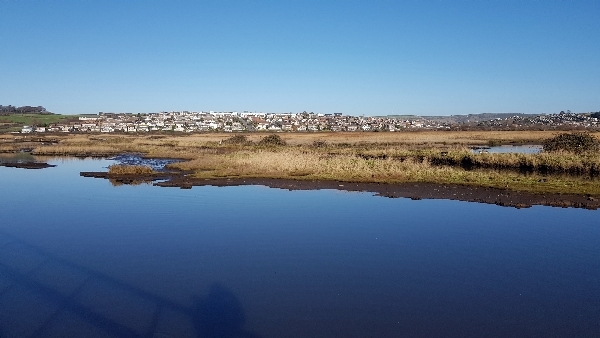 Lodmoor marsh seen from the west track this morning

A quick search through the large number of birds on the marsh quickly revealed my target bird, the ICELAND GULL! Whoopee!! This bird had eluded me since its arrival in November, it is thought to be the same individual that wintered here last year. In my opinion, Iceland Gulls look their very best in second year plumage and that is exactly what this bird was displaying, fantastic, I couldn’t stop taking pictures of it. 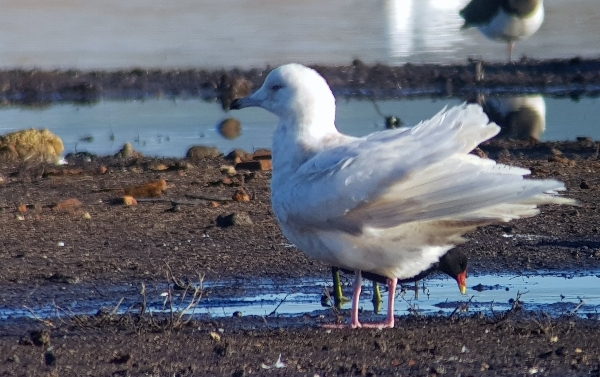 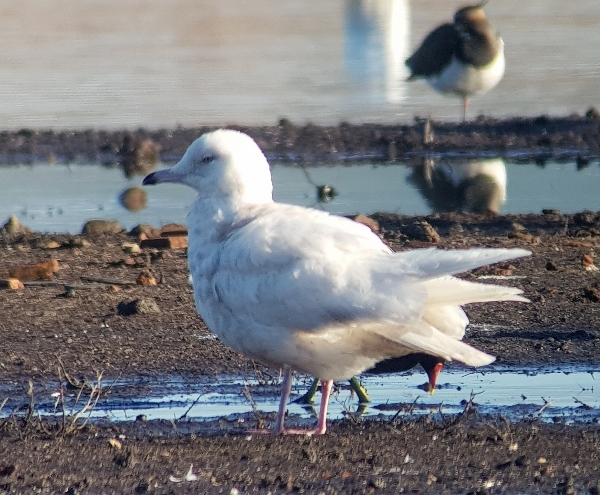 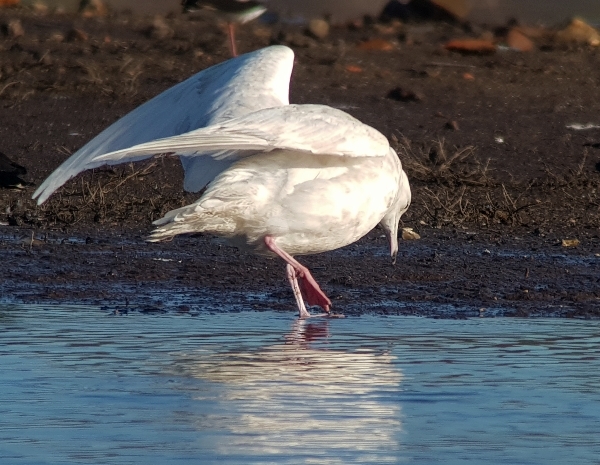 Dawn was getting restless as I drooled over a gull (her least favourite family of birds), so a quick scan around the rest of the marsh produced sightings of Great and Little Egrets, Grey Heron, Lapwing, Wigeon, Teal, Shoveler, Black-tailed Godwits, Common Snipe, Dunlin, Black-headed, Common, Mediterranean, Herring and Great Black-backed Gulls.

From Lodmoor we walked across the road to the main Weymouth Promenade, it was warming up in the beautiful sunshine, the bay was flat calm and birdless from what I could see. A quick scan through the bins and then through the scope produced, 1 Great Crested Grebe, 2 Cormorants and a Great Black-backed Gull. 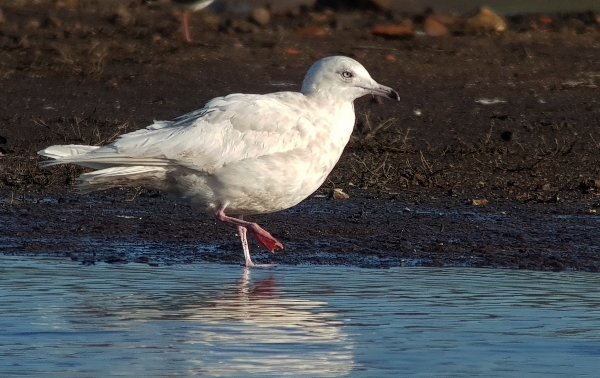 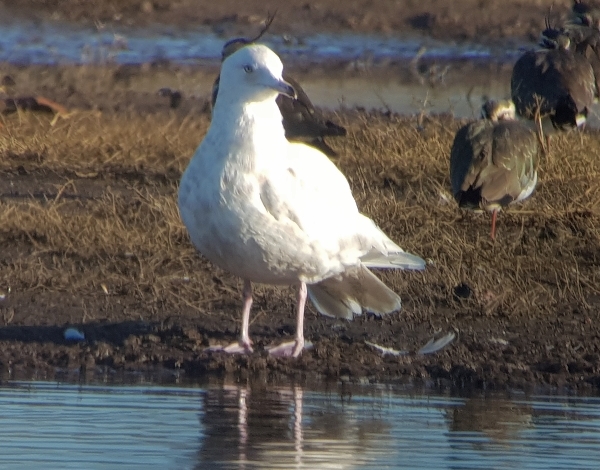 We walked all the way into town along the sea-front making many stops to scan the water, I was searching for Red-necked Grebe and Dawn wasn’t. It was a lovely walked and quite crowded at the main sandy beach area. We walked across the town bridge and bought fish and chips at Bennett’s, our favourite 'plaice' to buy take away F n C’s. 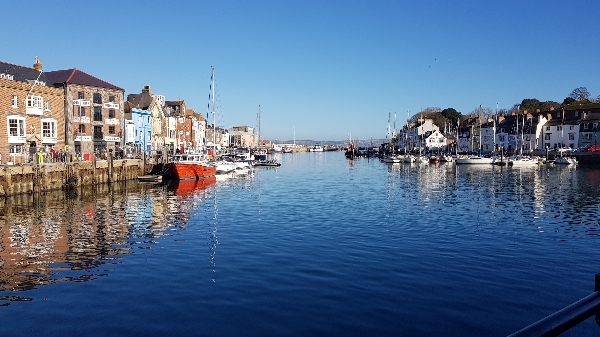 It was 2pm by the time we sat down to eat them and just afterwards we continued our walk along the harbour wall out to the pier on the west side of the harbour. At the very end of the pier we saw three very tame, Ruddy Turnstones and I scoped three Razorbills out in Newton’s Cove just below the Nothe Castle. Pied Wagtails and Rock Pipits flitted about in the weedy rocks below us. 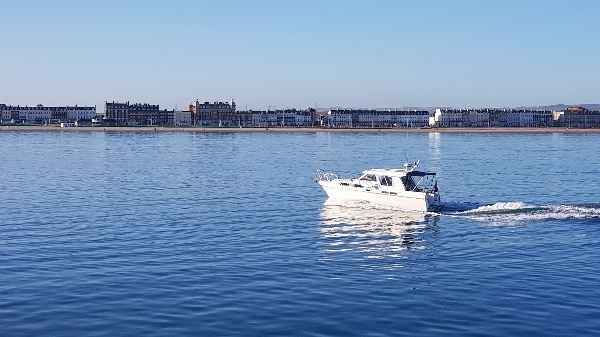 the sea-front at Weymouth taken from the pier

The sun had now gone behind the tall buildings of Weymouth so we set off on the return journey, halfway along Weymouth sea-front we walked back into sunshine so we stopped for a cuppa. 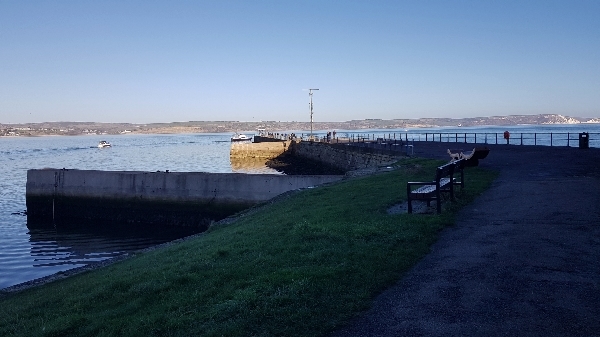 walking towards the pier alongside the entrance to Weymouth Harbour

Back at Lodmoor we saw hundreds of birds in the air over the marshes having been disturbed by a Marsh Harrier, we talked to a few local birders on the west track who told us that the Iceland Gull flew off during the disturbance and hadn’t come back. It would have been nice to photograph it in less harsh sunshine such as then, but it was not to be. 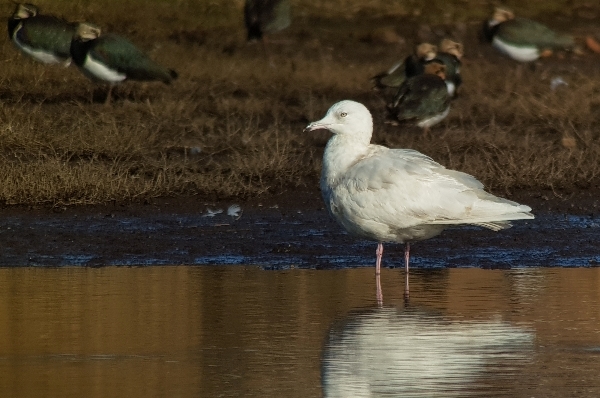 one last picture of the Iceland Gull

It was 4pm by the time we got back to the car, I could not persuade Dawn to visit Radipole Lake to watch the Starling murmuration she had had enough of birds for one day, so we drove home. The ‘Wolf Moon’ was magical as it rose above the horizon, it followed us all the home, what a beautiful sight to finish of a beautiful day. (We had covered 21,300 steps = 9.1 miles)