WALK FROM LELANT TO ST IVES VIA CARBIS BAY

THIS IS NOT A BIRDING TRIP.

We all had a shock wake up when the hotel fire alarm went off at 7:30am!! We quickly exited the hotel and gathered in the car park and waited for the all-clear. It took 30 minutes for the hotel staff to tell everyone that there was no fire, it was quite the opposite, a flooded bathroom had set off the alarm, a bit bizarre!!

We were very lucky today because we found ourselves in sheltered areas when the skies opened up and a deluge of rain fell.

We set off for Lelant  around 10am after a leisurely breakfast, we drove through some torrential rain along the way and we sat in the car at Lelant Church waiting for it to stop. Then blue sky appeared, the rain cleared and the sun came out, how nice! 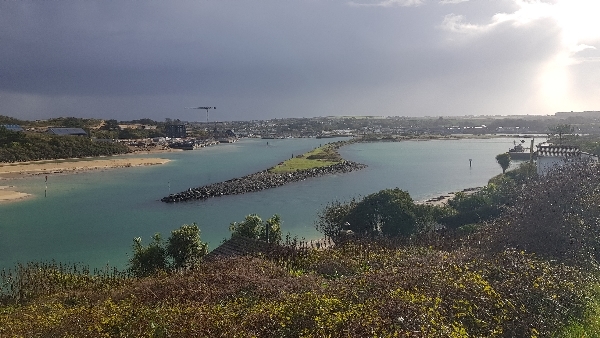 The views of this picturesque coastline were stunning, the colours of the landscape and sea-scape were like scenes from the Carribean, just breathtaking. We had a superb view of the mouth of the Hayle estuary all the way out to Godrevy Point and with the Lelant Golf links on our left and Porth Kidney Sands on our right we made our way to Carbis Bay. 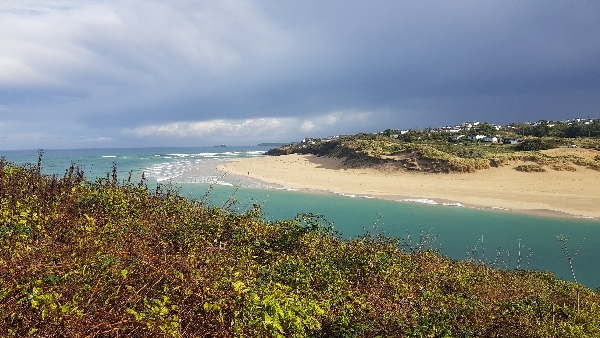 I saw Oystercatchers, Sanderlings, Curlews, Canada Geese, Gannets and Gulls around the beach area and Stonechats, Meadow Pipits, Goldfinches, Linnets and Starlings in the heathland behind the beaches. 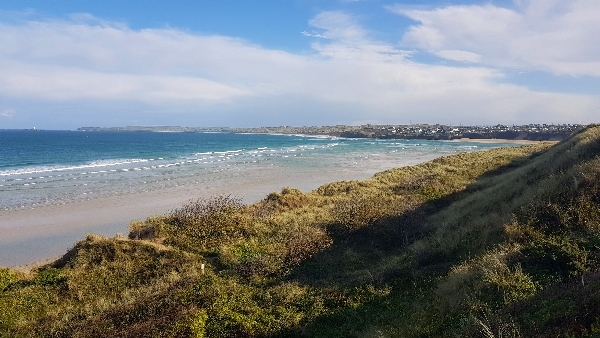 In Carbis Bay we stopped for coffee and it poured down whilst we were inside the cafe. We watched a couple of seals working their way along the beach just offshore. 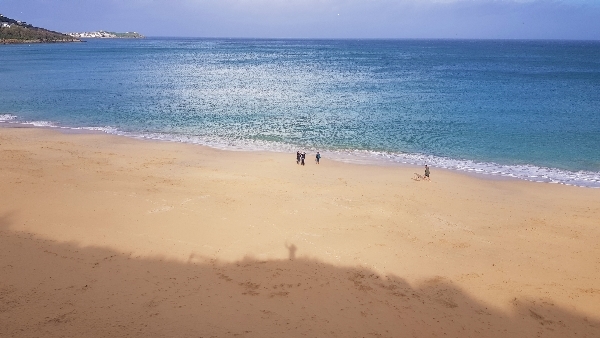 Carbis Bay, the three girls waving and my shadow waving back to them, plus the obligatory dog walker

Between Carbis Bay and St Ives we walked through a lot of woodland and alongside tree laden gardens where I saw 3 Firecrests, Blue & Great Tits and lots of common garden species. 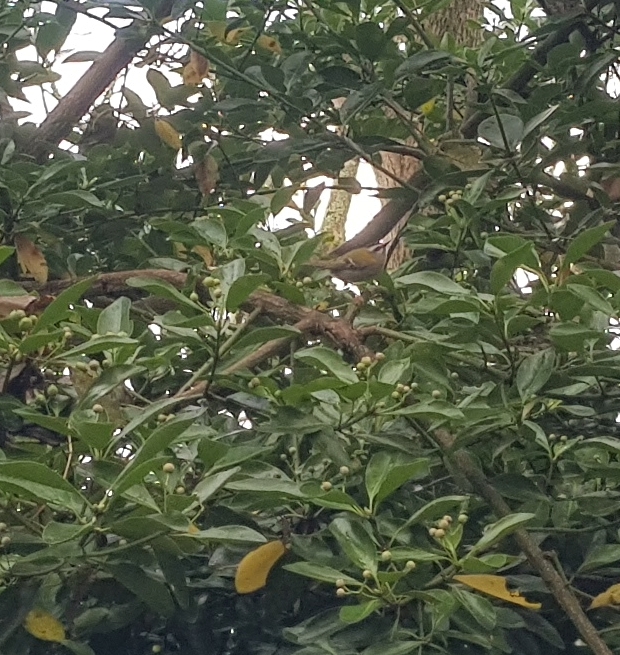 there is a Firecrest in this picture - can you find it? 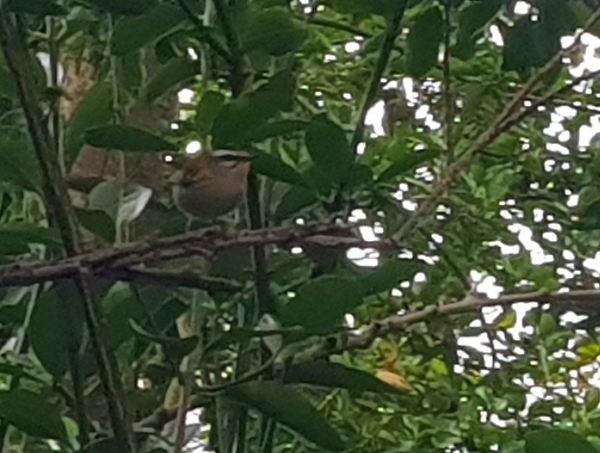 a poor record shot from my hand-held phone

In St Ives we walked around the harbour, it was still low tide, the very tame Ruddy Turnstones came up to us for crumbs, it was amazing how tame they were, they would eat out of your hand! We walked around St Ives Head, we visited many Artist's Studios, my wallet came out relatively unscathed and we made it back to the station at 4pm. We had two hail storms during our time in St Ives and both times we were sheltered. 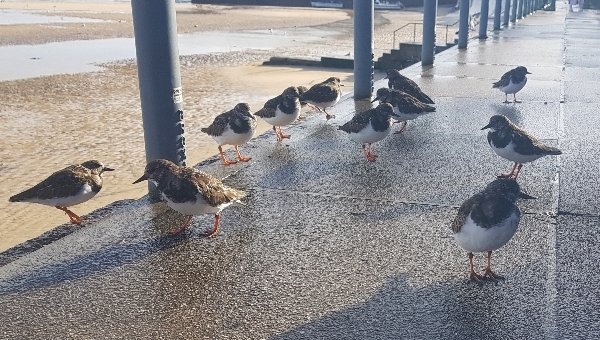 how close are these? Taken with my phone, less than meter away 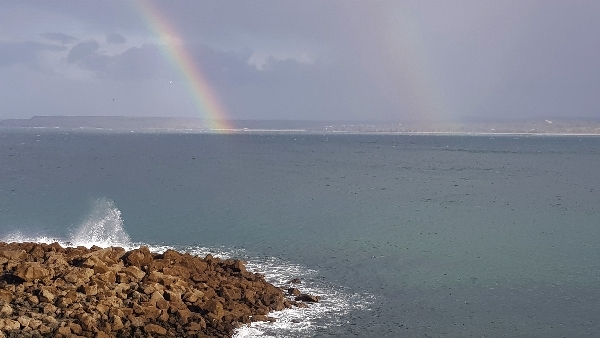 rainbow at St Ives with a Gannet flying into the rainbow

I found two more Firecrests in the bushes behind the station platform where we bought single tickets back to Lelant and that is when the fun began. We were not told that Lelant was a request-only stop! The train whizzed past our stop, we never saw the ticket conductor to make the stop-request!!! So we had to stay on the train to St Erths. 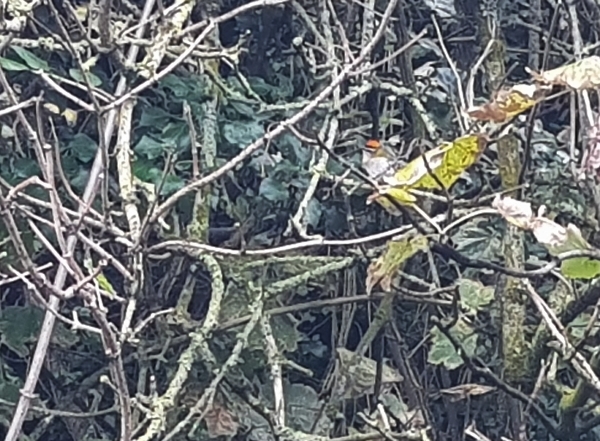 A conductor got on the train at St Erths and informed us that the return journey was about to commence but that the train would not be stopping at Lelant either!! In fact, we had to travel back to St Ives and then once again travel back to St Erths for a second time and them wait for the train to head back to St Ives before we could get off at Lelant! What a fiasco, we now know every inch of that journey by heart and all because of some dipstick failing to give us the correct information.

We saw Lelant train station about six times today, I think that was enough, don't you? What was worse, was that we thought the Cornish Pastie shop called Philps was closing at 5pm and there was no way that it would be open by the time we got there. It poured with rain and hail once again whilst we were on the train and politely stopped when we got off. We walked back to the car and drove through more rain into Hayle. We got to the pastie ship just after 5pm and found that it was open until 6pm anyway, panic over.

We sat in the car park and enjoyed the best Cornish Pastie you are ever likely to taste, light pastry, real chunks of beef and so yummy. We drove back to the hotel and it rained all the way.