A DAY OUT AT WWT STEART

I met up with Linda and Sarah in the car park at Steart at just before 8am. They had booked a day trip and had chosen  Steart becuase it was new site for them. I had a really good day out with them, they were great company and showed lots of enthusiasm and were relentless in their pursuit for knowledge and new species, they asked 'birdy' questions all day long!

We started listing spoecies as soon as we met, Common Shelducks were flying over in small groups as well as Little Egrets and a Grey Heron. Goldfinches twittered nearby and as we began our first walk we saw a Great White Egret fly over. 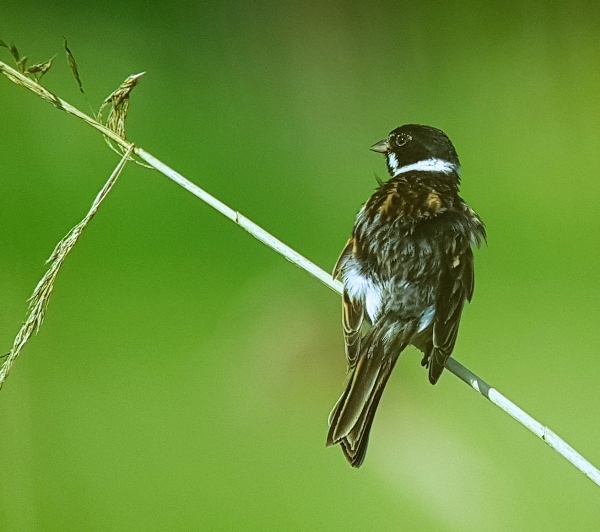 We took the track onto Stockland Marsh and as we walked through open marsh with scrub hedges we found Reed Warblers, Reed Buntings, Common Whitethroats and a juvenile Common Stonechat. Further into the marsh we added Chaffinch, Greenfinch, Cetti's Warbler and a distant Marsh Harrier. We spent some time on the raised viewing platform watching Cetti's Warblers, Greenfinches, Linnets and More Reed Buntings. 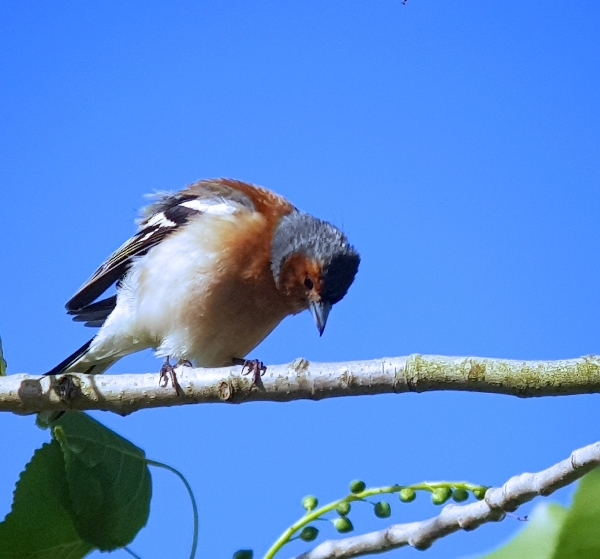 On the return walk we had great views of Common Whitethroat, Sedge Warbler and lots more Linnets. A  few Cattle Egrets flew over giving us the full set of egrets and we saw a distant Common Kestrel. Just as we got back to the car park a flock of Dunlin flew over us and the odd Herring Gull put in an appearance. 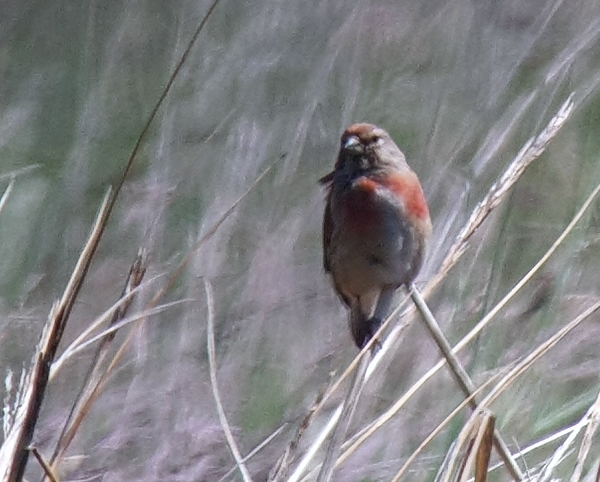 the heat haze spoiled this shot of a male Linnets

After a short break back at the car we walked across the road to visit the hides, we started at the Quantock Hide and along the track to this hide we had great views of a Sedge Warbler as it sang and performed its song flight. 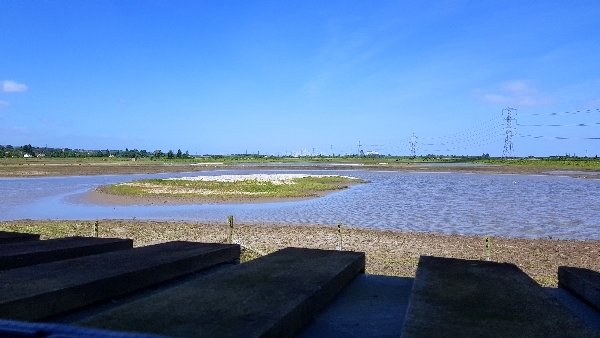 a view from the Quantock Hide

We spent an hour in the hide watching lots of Avocets with chicks, they were very entertaining. Also out on the lagoon we saw Oystercatchers with chicks, Canada Geese, Grey Heron, Cattle Egrets and a large number of Common Shelducks. We were lucky enough to see a Little Ringed Plover, we could hear a Buzzard in the distance and Linda found it perched in a tree. 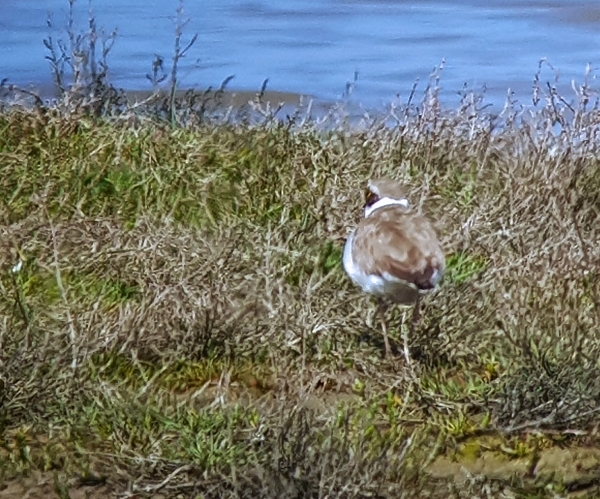 We decided not to visit the Mendip Hide becuase of the position of the sun, so we got our picnic lunch from the car and sat in the lovely sunshine to eat it.

For the rest of the afternoon we drove down towards the 'old' Steart Marsh area, our first stop was at a small car park where we took a trail across some grassland to the beach. We found Skylarks and Linnets on the grassy area and from the beach we saw zilch. The tide was so far out that we could hardly see the sea. A flock of Cranes hovered over Hinkley Point Power Station, they were all bright yellow and were there to help build the new reactor. 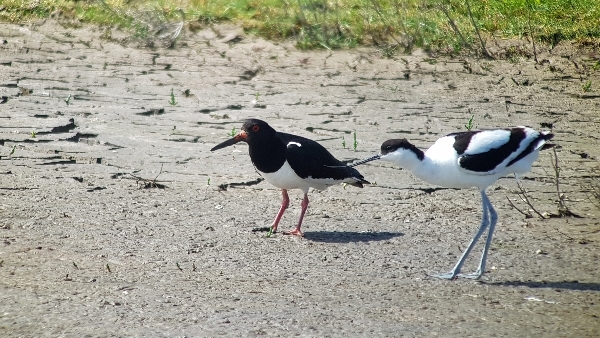 There was a stand-off between an Avocet and an Oystercatcher, this is the 'staring-out' stage

Next we parked near the village and took a path that led us along the shoreline towards Steart Point. We added Robin, Blue Tit and Great Tit around the car park but our hope of seeing some waders from the shoreline were dashed by the low tide. 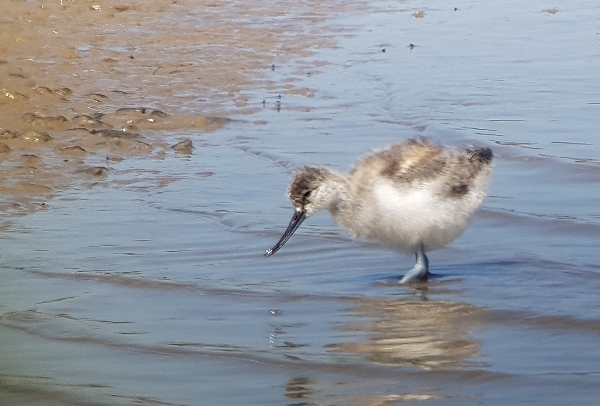 In fact we never saw much during the entire walk down to the 'Tower Hide' and further on to the new hide at the point. We did see Great Black-backed Gulls, Herring Gulls, Common Shelduck, Oystercatcher and more Skylarks. 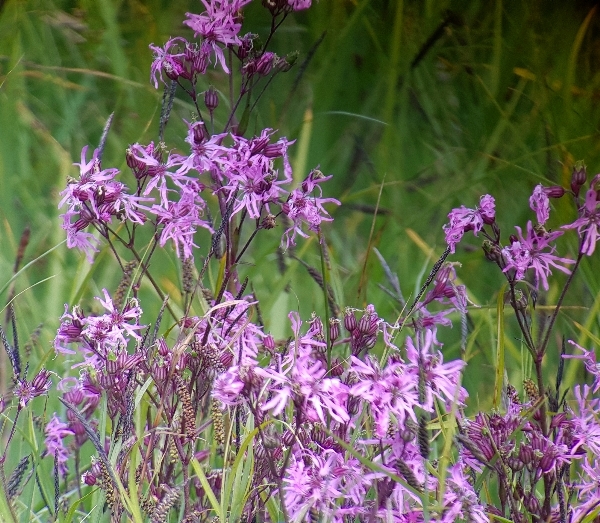 Our walk back to the car park produced sigtings of Dunnock and as we watched a group of Rabbits we noticed a Red Fox peering from the hedge. Then Sarah picked out a Northern Wheatear on the grass which was an excellent find. Just before we reached the car we saw three Stock Doves flying around and a pair of Collared Doves. 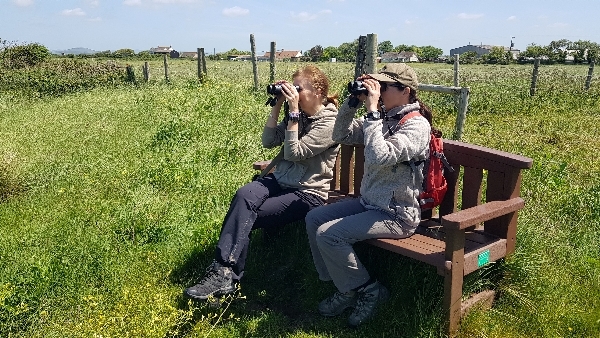 my companians for the day - Linda (right) and Sarah

I was really impressed by my companions, we had been out nearly seven hours and they were still looking and listening with great enthusiasm. For beginners they were very good at finding birds and getting onto a bird sitting in a bush, they will soon be accomplished birders.

We said goodbye around 3pm after listing 48 species, as I drove through Bridgewater on my way home I added Black-headed and Lesser Black-backed Gulls, so my list was 50 for the day!