a day out in Dorset with Nigel & Vaughan from Wales

A day with Nigel and Vaughan

Nigel came down from Chepstow with his best mate Vaughan, they both wanted to add a few grebes, divers and sea-birds to their year list. They were supposed to collect me at 7:30 am in Stoford but they made me wait in the freezing cold temperatures until 7:45!! It was minus 5 out there, good job I had my thermals on!

We drove straight down to Dorchester and stopped at the Water Meadows near Charminster, we were hoping to see White-fronted Geese but none were there. It was a picturesque scene with the frozen water meadows and the birds gathered around any unfrozen bit of water. You could see the frost on the feathers of the Canada Geese just showing what great insulation they offer. 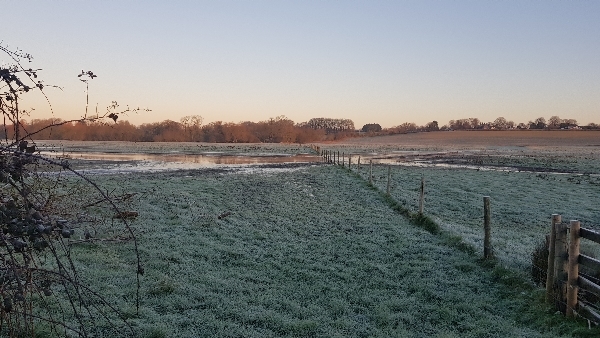 As well as the Canada Geese we listed Mute Swan, Teal, Wigeon, Little Egret, Grey Heron and Lapwings, no other geese were seen or heard.

Our arrival at Portland Harbour was some 20 minutes later our first port of call was Sandsfoot Castle, a Tudor structure, built and funded by Henry VIII in 1542 at a cost 0f £3,887, it obviously wasn’t built by a good builder, you should see the state of it now!! I am sure Old Henry would not have appreciated us walking over his lush gardens to view the Harbour looking for grebes and divers! 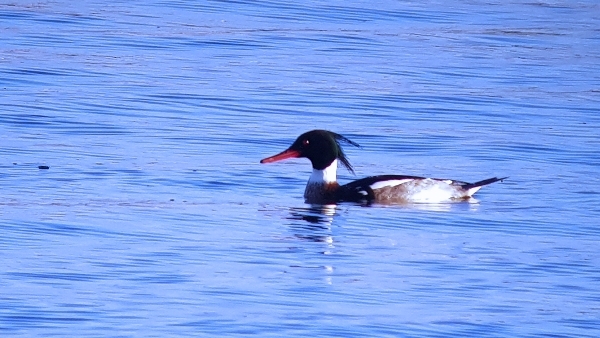 we saw about n70 of the lovely Red-breasted Merganser

Well, we found some very distant birds, a group of 4 Black-necked Grebes, some Red-breasted Mergansers, a single Great Northern Diver, at least 8 Great Crested Grebes and lots of gulls.

We walked down to the sailing club ramp and viewed another section of the northern side of the harbour, this time we added Slavonian Grebe and another Black-necked Grebe.

It was a very high tide as we drove past Ferrybridge on the causeway to Portland, so we didn’t stop. We viewed Portland Harbour’s southern side from two places, Ham Beach and Portland Castle. We got slightly better views of a second Slavonian Grebe, a much closer Black-necked Grebe and some superb views of Red-breasted Merganser.

Before we drove up the hill through Fortuneswell onto the ‘Isle’ of Portland we made a quick stop at Chesil Cove. Earlier in the month I had seen a Black Redstart near the cove and although it hadn’t been reported recently I decided to have a quick look. 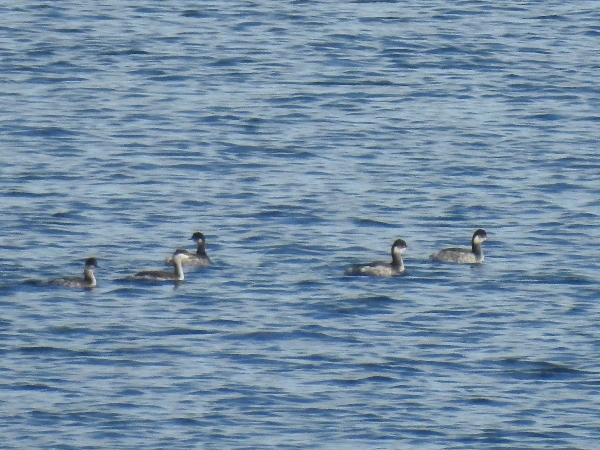 an archive picture showing the difference between the Slavonian and the Black-necked Grebes, taken in Portland Harbour in December

The Redstart was in the same area as when I saw it before and it gave excellent views to my companions, job done, move on. 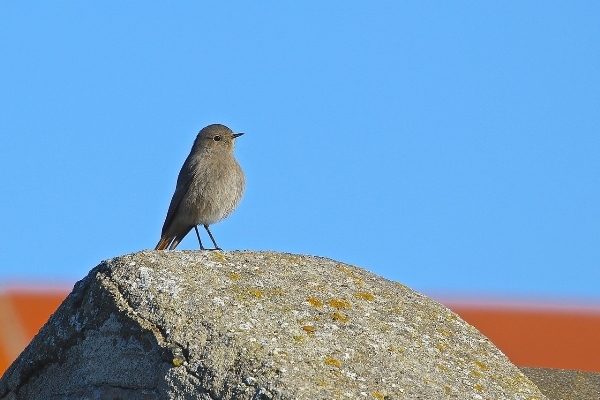 Next we visited the woodland adjacent to Pennsylvania Castle where a wintering Firecrest was reported on a regular basis. We searched all the probable habitat as we walked down the path towards Church Ope Cove and despite hearing the little gem we did not see it. We did pick up Chaffinch, Goldfinch, Blue & Great Tits and a fairly uncommon sighting for Portland, a Great Spotted Woodpecker. 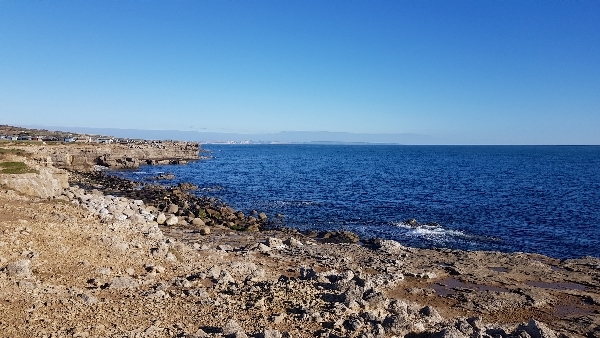 Finally we got to the lighthouse at Portland Bill, we stopped for a bite to eat and a coffee before walking around the rugged shoreline. A pair of Ravens were in the car park and both Buzzard and Kestrel were seen in the top fields as we drove down to the Bill.

From the rocks on the west side of the Bill we saw Guillemot, Razorbill, Shag, Cormorant and a Fulmar. At the Obelisk right at the Point we found a small party of Purple Sandpipers, they showed really well and we enjoyed them for quite a while. My Welsh buddies were well pleased with their pictures. 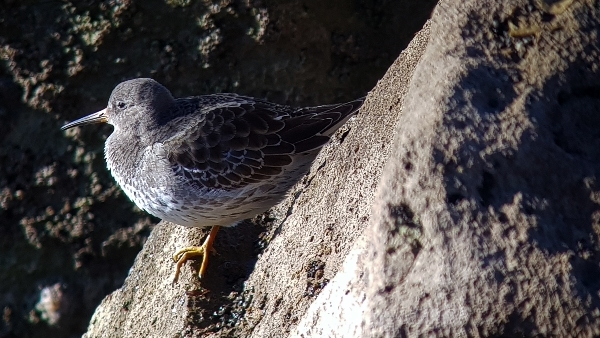 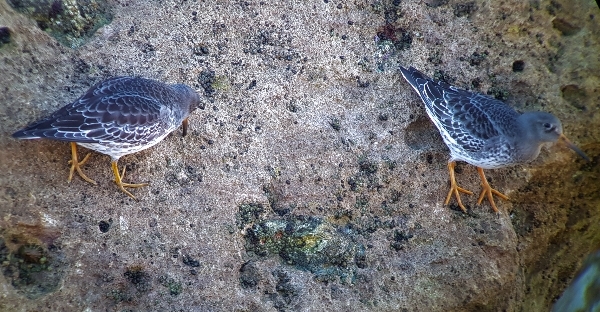 they really do look Purple at this time of the year 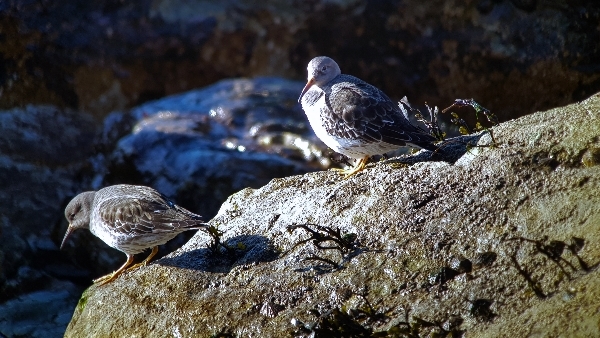 Also around the Bill area we noted Pied Wagtails, Rock Pipits but we could not find a Gannet after 20 minutes of searching we dipped on a Gannet, unbelievable!

Back in car we drove back up the hill to Bird Observatory where we looked for Little Owls in the quarry without luck.

Back on the road after 30 minutes we stopped off at Ferrybridge where the tide was now at its lowest, a very low tie indeed. Birds were dotted all over the exposed mudflats and sand bars. Scoping from the bridge and the visitor’s centre we noted: Oystercatchers, Dunlin, Ringed Plover, Bar-tailed Godwits, Brent Geese and thousands of gulls. Many Mediterranean Gulls joined the throngs of Black-headed and Herring Gull. 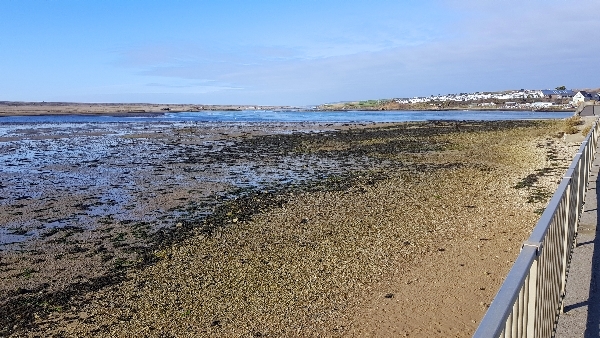 Ferrybridge at low tide looking towards the Fleet Lagoons

A scan of the harbour from the western shore provided more sightings of Mergansers and Black-necked Grebes.

A return into the centre of Weymouth to look for Bearded Reedlings was next on our list, we made a feeble attempt to see them but none of wanted to walk the length of the reserve, besides it was getting dull now after cloud came in from the north. We saw Shelduck, Teal, Tufted Duck, Mallard, Little Grebe and Vaughan picked up a very obliging Cetti’s Warbler just below the bridge we were standing on. 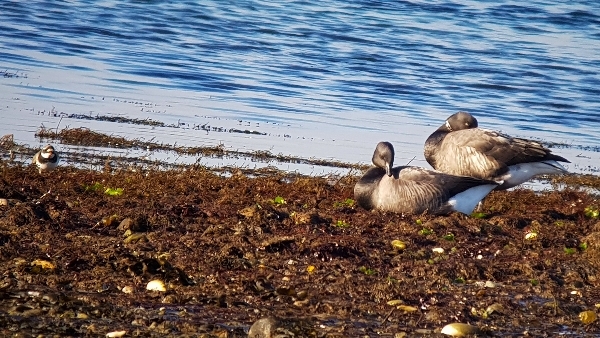 a couple Bret Geese with a Ringed Plover

Lodmoor was our last scheduled stop, we parked at the entrance and walked along the west track. All the usual suspects were present: Common Snipe, Dunlin, Black-tailed Godwits, Shelduck, Wigeon, Shoveler, Teal, Mallard, Gadwall, Little Egret, Grey Heron and the leucistic Ruff. Very few gulls were loafing around which was a shame as we hoped that the wintering Iceland Gull may put in an appearance, 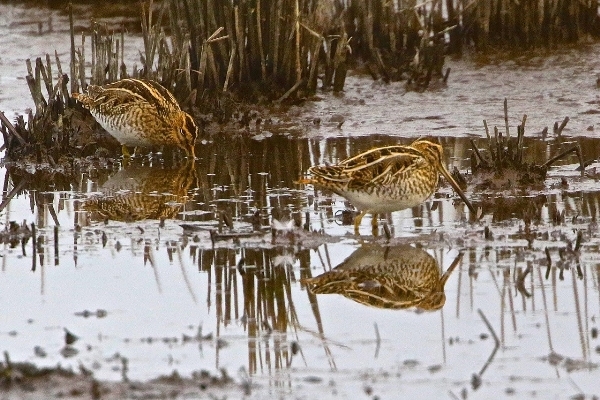 Before we left we walked across the road to view Weymouth Bay from the raised promenade, after a couple of minutes we picked out a Red-necked Grebe (our fifth species of the day), it was very distant and the light wasn’t great.

One stop at Beachdown Way on the northern border of the reserve gave us the opportunity to scan a pool affectionately know as the Post Box pool, because the views of the pool are had next to a post box!!  Anyway, we saw nothing there and scanning the reserve did not even produce a sighting of a Marsh Harrier, we did see a Great Egret but it was time to leave. 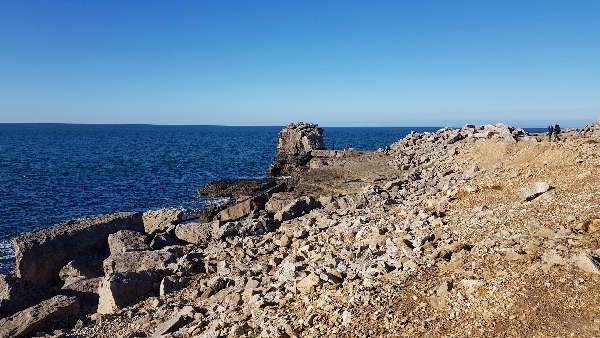 The boys dropped me home before 5pm and headed off back to Wales. It had been a great day, our best sightings were of Purple Sandpipers and the Black Redstart.