A DAY OUT IN SOMERSET

WEATHER: sunshine and showers, a strong breeze and quite chilly

Guy picked me up at 8am this morning, it had been raining quite hard throughout the early hours but it had stopped now and clear sky was appearing above us.

We drove straight to Herriots Bridge at Chew Valley, some of the main roads were quite flooded but the lanes seemed to be much clearer. We had several target species for the day which included, Smew, Long-tailed Duck, Bewick Swan, Whooper Swan, Red-crested Pochard, Goosander, Little Stint, Great Northern Diver, Yellow-legged Gull and American Wigeon. 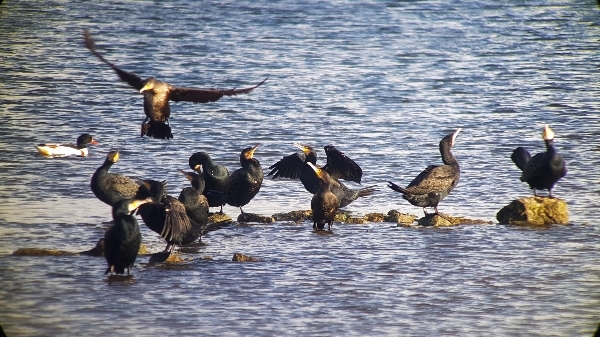 Cormorants and a Shelduck

From Herriots Birdge the visibility was awful, looking into the sun over the pool and into the wind looking from the other side of the road into the main lake. We saw all the usual common duck species with the addition of Pintail, Shelduck and Goldeneye. The water level was quite high so no waders were present but we did see Grey Wagtail and a Kingfisher from the bridge. 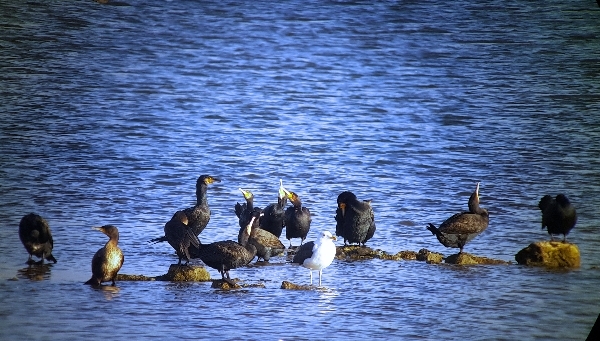 Cormorants and a Great Black-backed Gull

We drove round to Stratford Hide and spent an hour scanning the lake for the Smew and the Bewick's Swans, neither of them showed up. Guy picked out the female Common Scoter that had been around for a few days, why is a sea duck spending time on a fresh water lake? 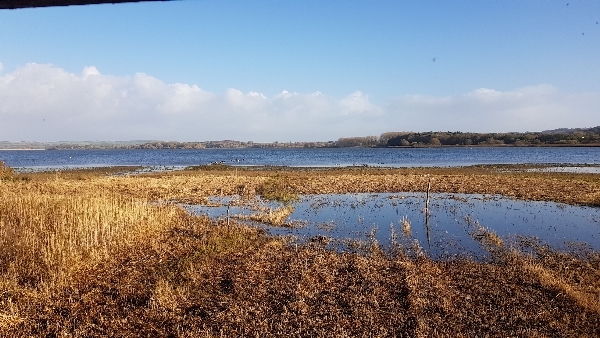 the view from the Stratford Hide

We picked out many more Goldeneye, we saw Great Egrets, Little Egrets, Grey Herons, lots more Pintail, Tufted Duck, Common Pochard, thousands of Coots, some Great Crested Grebes, Great Black-backed Gulls and a small flock of Dunlin flew by. About 30 Lapwings was flushed by a beautiful male Marsh Harrier and we searched though the Mute Swans looking for the Bewick's which had been present for a few days, without seeing them! A flock of Meadow Pipits were feeding along the edge of the reeds and we searched through them for a Water Pipit whilst also searching through the cropped reeds for a Jack Snipe, niether of them was present.

Cormorants viewed from the Stratford Hide with a Shelduck

From there we drove back to Herriots Bridge because we were told that the Smew was visible from the bridge if you knew where to look. Sure enough we picked out the female Smew, which was at least a mile away, a tiny dot amongst thousands of other tiny dots, not great birding I have to say.

We had to drive to the Water Authority Headquaters at Woodford Lodge to renew our Birding Permits and whilst there Guy talked me into buying him a cup of tea and a toasted teacake, talk about hard core birding!! Ha!

We them drove to the main visitor's centre and picnic site next to the dam to scan the open water for the Long-tailed Duck. We found an adult Yellow-legged Gull more Goldeneye but not our target bird. From the other end of the car park we scanned the bays and the area around Deny's Island and from there we struck gold. We found two adult and a juvenile Bewick Swan in one of the bays and then on the lea-side of Deny's Island in calm water we saw four more adult Bewick's, 8 Goosander (three terrific males) and we picked out the female Red-crested Pochard.

As time was pressing we made one last stop, back at Woodford Lodge, Guy wanted to scan the main body of the lake to look for the Long-tailed Duck which did not show! 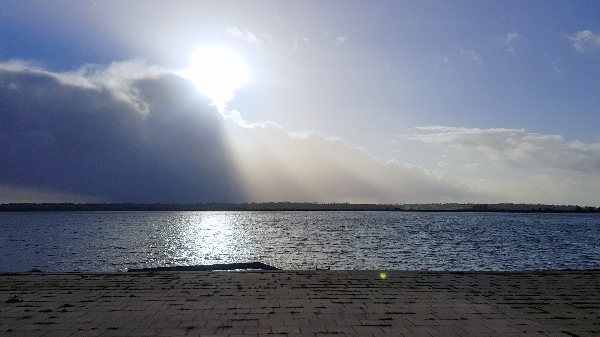 We then drove across to to Cheddar Reservoir, which was also nearly back to full capaicty after the November rains. A Little Stint had been present for nearly a week and we hoped to see it. I ate my lunch as we drove and Guy sat to eat his once we got there. We parked at the Axbridge Gate and walked to the Cheddar Tower, well I did, Guy finished his lunch and drove around to the Cheddar Car Park. 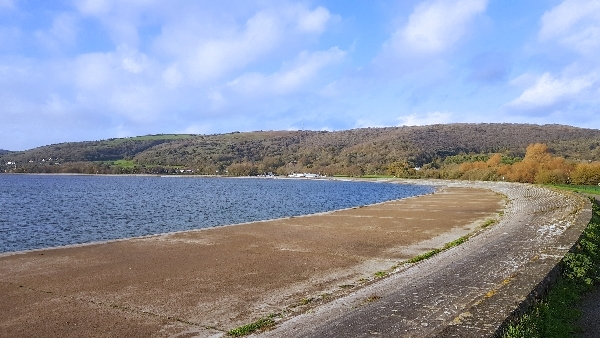 Cheddar Reservoir, the water level is nearly back to normal

I found a Great Northern Diver, swimming very close to the shore and I came across a Kittiwake, which did not look to well, but it did fly around a little bit. Two Ruff were also seen flying away from me and I saw Linnets, Pied & Grey Wagtails and a beautiful male Red-crested Pochard which was hanging around with some dodgey looking hybrid Mallards. 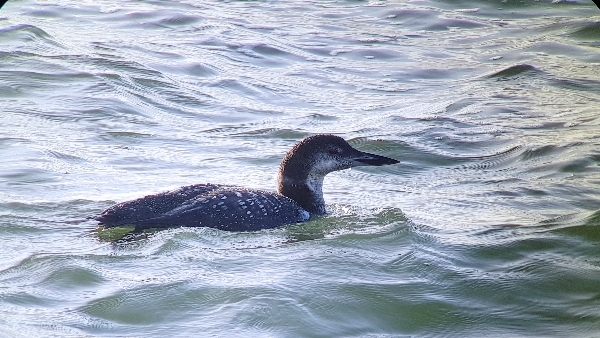 I had godd close-up views of this Great Northern Diver

I found the correct place where the Stint had been favouring but unfortunatey the bird had gone. A local birder told me that it hadn't been seen since Sunday, two days ago! Doh! 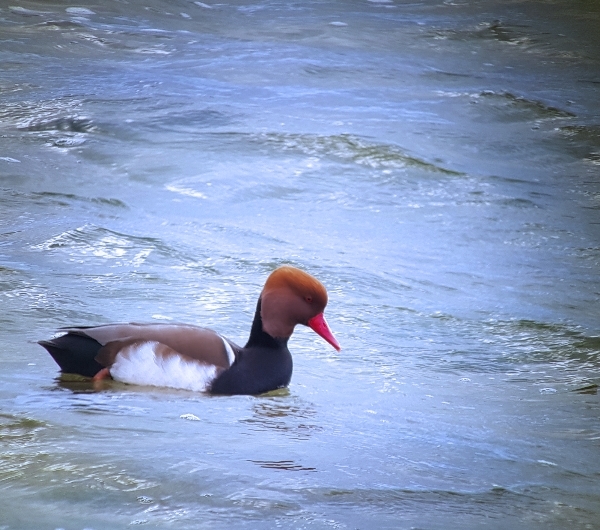 Our final birding location was the pool at Mere Heath which can be viewed from the track along the main drain at Shapwick Heath. We parked at Ham Wall and walked to view Mere Heath Pool. An American Wigeon had been favouring this pool for a couple of weeks and it had been seen this morning, so we were hopeful. 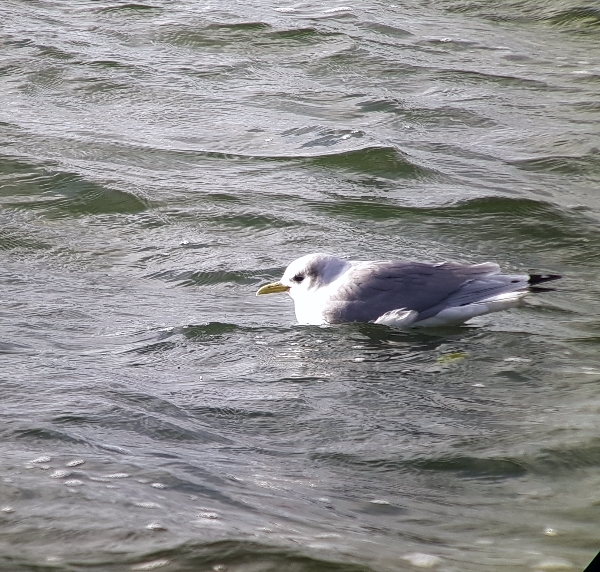 Guy had seen this bird three times in recent visits but I haven't seen one for quite a few years. We scanned the usual place where this yankee duck had been favouring and....nothing!! We scanned the pool which held hundreds of Mallards, Gadwall, Tufted Ducks, Common Pochard, Teal, Eurasian Wigeon and Pintail. A Marsh Harrier kept spooking the ducks and causing them to make short flights around the pool, making it difficult to keep track of them.

It started to rain but I didn't budge, it rained harder and I took shelter under the Tower Hide. Unperturbed, I kept scanning and....nothing! The bird was not there! I couldn't beleive it, perhaps it had flown over to Noah's Lake, it was too late to walk round to there, the light was already fading.

We walked back to Ham Wall and noticed masses of Starlings heading for the roost, up to 300,000 was the latest estimate. We watched from the hump-backed bridge as the birds simply dived into the reeds as soon as they arrived. No murmurations, we did see four or five Marsh Harriers arriving at the roost too!

Guy drove me home in the dark and the rain, Yeovil was jam packed with cars it took an extra 30 minutes to get home, it was 5:30pm when I got in. We had had a good day out with lots of sightings and one major dip!