A DAY OUT IN SOUTH WALES

WEATHER: wet and miserable until about 10am then progressively clearer. Temp 6 -12C

After last night’s spectacular Starling murmuration at Hutton (incidentally it featured on the local BBC news channel) Nigel and I drove to Chepstow to stay at Nigel’s House in preparation for today’s Welsh Excursion.

We knew that the weather forecast for this morning was pretty awful so we had a lay-in, leaving the house at 8:15am. It was dull and misty with rain clouds looming in the west which was the direction we were heading. 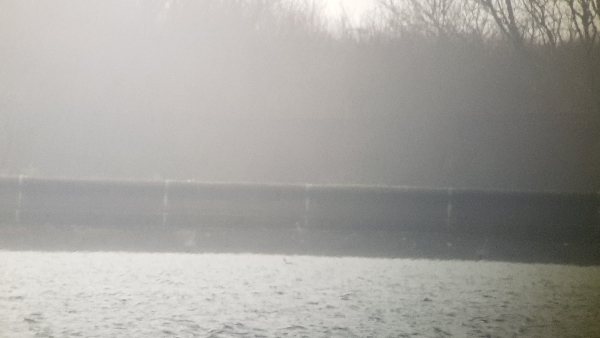 our first view of the diver, this is using 60x magnification on the scope, the bird was at least 1 1/2 miles away!!

The Reservoir (Eglwys Nunydd) near Port Talbot was a 58 mile drive and weather got progressively wetter along the way, it was pretty bad driving conditions at times. We arrived at 9:30am just as the rain eased off and the sky got a little brighter.

Our first problem was getting into the reservoir, we had not done the research and were ignorant of the fact that there was no access to the water, it is a private concern with strictly no access. Locked gates and a high fence greeted us as we stepped from the car, we used our ingenuity and after a while we found a way in, a couple of local workers told us where our target bird, the Pacific Diver, had been frequenting lately so we headed off in that direction.

Slowly the misty conditions cleared and we could scope most of the reservoir. It was safe to say that the Diver was not where we were told it would be, in actual fact the very opposite applied. The bird was at the furthest most point it could possibly be from us!! It was a tiny dot in the scope and it  required a long walk to get better views.

We walked to the sailing club house to get better views and stumbled upon a shelter cove where a bunch of Tufted Ducks were feeding, Nigel called out a Scaup! I scanned the birds and found that his ‘Scaup’ was in fact an adult male RING-NECKED DUCK!! Well done Nigel you have just found a rare bird!! Other species seen nearby were Grey and Pied Wagtails, Goldeneye, Little and Crested Grebes, Cormorants, Mistle Thrushes and a little further on a Common Sandpiper. 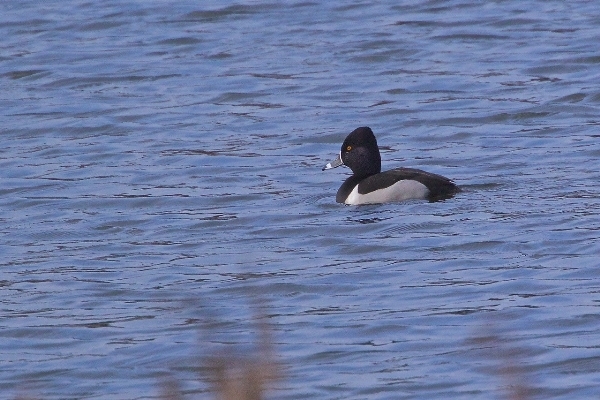 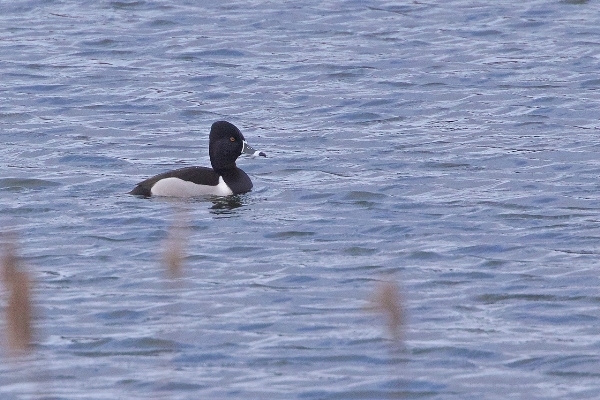 To see the diver it required some serious legwork, Nigel passed on that and so I set off on my own. It only took 20 minutes of fairly fast walking to get there and shazam!! The bird was literally just below me in the water, it was too close to view in the scope so I walked away and then took my phone-scoped pictures. What a cracking and obliging bird. 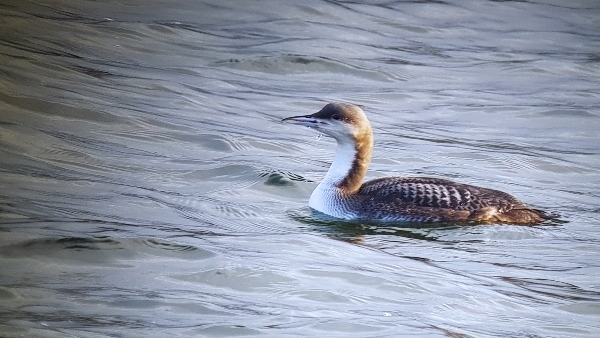 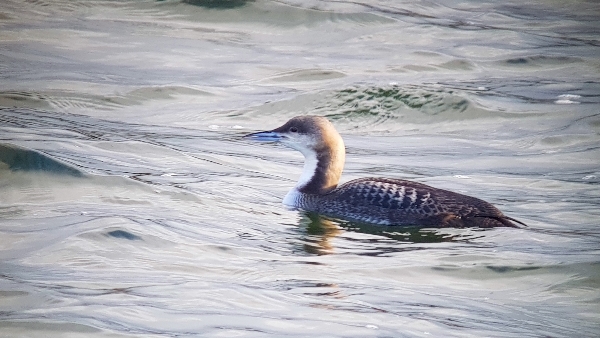 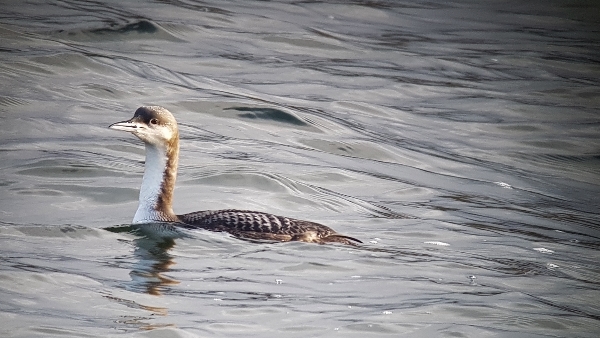 I bumped into some other birders who mentioned that a Slavonian Grebe was also present, I couldn’t find it but did not put much effort in. 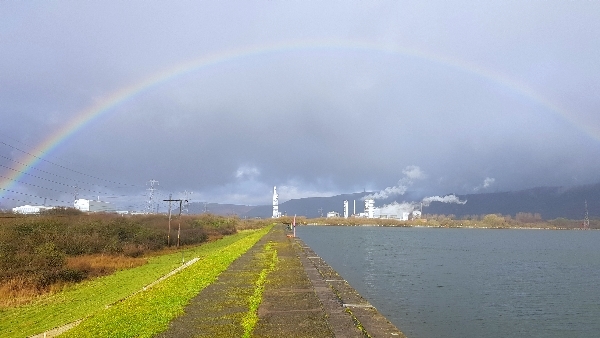 during my walk back to the car it rained a little 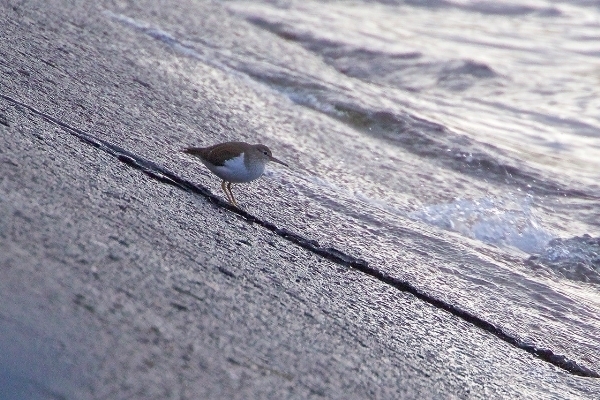 the Common Sandpiper, taken by Nigel

Back at the car Nigel was sipping coffee and eating his lunch, I promptly joined him. Between us we had seen Jay, Buzzard, Bullfinch and a few other common birds during our walk back. It was 12:30 when we set off back towards Newport, two Red Kites flew over us along the motorway just after we set off. The drive back was so much better, dry and far less traffic. 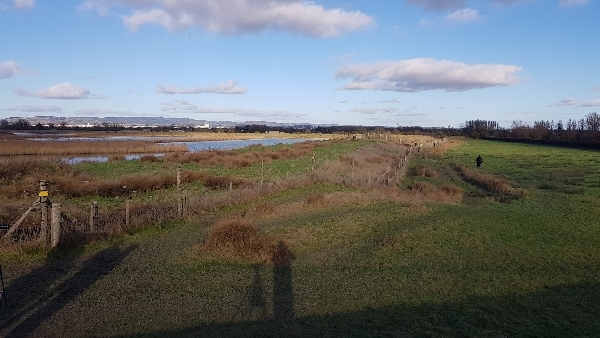 a view from the embankment at Goldcroft, you can see my shadow and Nigel walking away

A second coffee and another sandwich was consumed before we set off to view Goldcliff Wetlands near Newport. A report of some Pink-footed Geese and a single Tundra Bean Goose was the attraction for us. We viewed the open wetland from the nearest hide and guess where the geese were congregated? Yes you are correct,  they were at furthest point away from us that was possible on the reserve.

So off we went walking the entire perimeter of the wetlands to reach the nearest hide to them. It was well worth it, over 20 Pink-footed Geese and the Bean Goose showed very well alongside Canada and Greylag Geese. 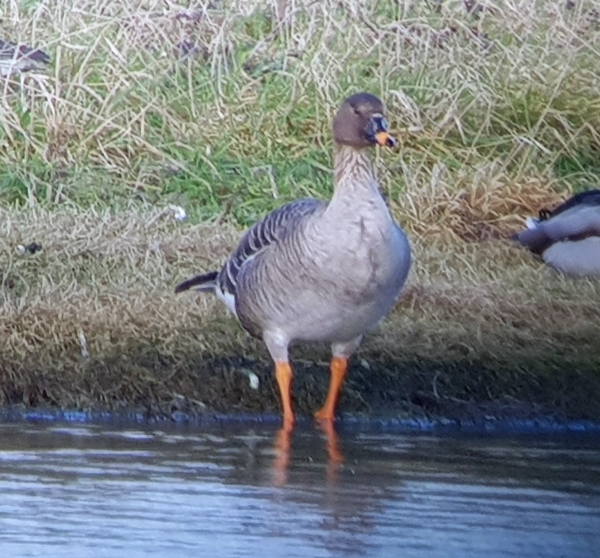 Also present on the reserve was: Common Shelduck, Grey Heron, Wigeon, Teal, Shoveler, Mallard, Stonechat, Meadow Pipit, Reed Bunting and a Little Egret. Many birders were gathering to watch the local Barn Owl, apparently this local gem came out in broad daylight (from 2pm onwards) to quarter the grassy banks around the reserve. 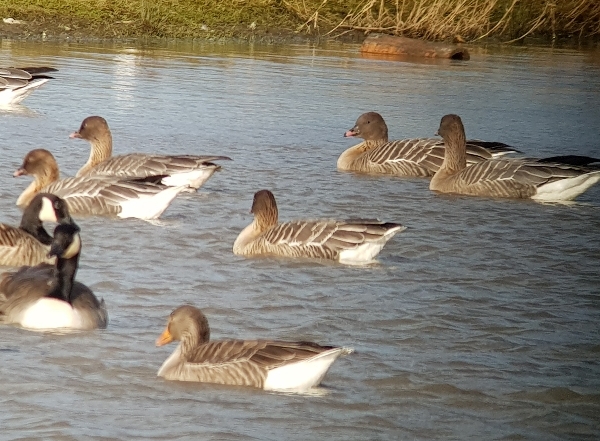 We waited until 3pm and it did not show! I took a look over the embankment to view the sea and the rocky coastline where I added Curlew, Dunlin and Grey Plover to the day list.

We left just after that, arriving at Nigel’s house around 4pm. We said goodbye and I set off for Stoford arriving a little before 6pm. Thus ended a superb two-day event with Mr Nigel Bleaken, I added 6 species to my year list and one to my life list (Pacific Diver).