AN ADVENTURE TO SEE FOUR GREAT TARGET BIRDS IN SOMERSET

WEATHER; dull and overcast until 3pm. Cold with a light breeze. Temp 4-6C

There are a few great birds around in Somerset at the moment and I decided to go and look for them today. At least three really good year ticks were on the table namely: Kentish Plover, Ring Ouzel and Penduline Tit. I also wanted to get better views of the Baikal Teal which I had seen a couple of time but always distant.

I mentioned my plan to Nigel Bleaken and he decided to join me for the day, he drove down from Chepstow and met me at RSPB GreyLake Reserve to look for the Teal.

I arrived around 8:15, the car park was already pretty full including Nigel’s Car, so I walked quickly to the raised hide were all the seats were already taken, including the best spot occupied by none other than Nigel Bleaken.

It was very quiet in the hide, everyone was in deep concentration searching through a thousand Eurasian Teals for the odd one out. Occasionally the Teal would all take to the air as a Marsh Harrier drifted over, settling once again in the most distant area visible from the hide, it did not look too promising I must admit.

Then a shout went up “I’ve got it”, hooray, we were all joyful until we got onto the bird and saw the miserable, distant view we had of it. All the Teal flew up once again and the bird had to be relocated, once again it was partially obscured and the view of it was pants!

This went for a while until we gave up at 10:00am, Nigel wasn’t happy at all with the sighting and would not tick it!! Also on the reserve we saw Pintail, Shoveler, Wigeon, Great and Little Egrets, Lapwing, Common Snipe, Peregrine Falcon, Marsh Harrier and Common Buzzard.

We then drove across to Burnham-on-Sea to look for the Kentish Plover which had been showing daily for the last few days. We arrived at the correct spot, on the promenade looking down to where the River Brue and the River Parrett meet the sea. It took 30- 40 mins to get there and on arrival we were told that the bird had been showing well but it had just been flushed by dog walkers, grrrrrrr!!!

We spent about 30 futile minutes trying to pick it out on an island about ½ mile away without luck. So we had a coffee and a snack before resuming our scanning. The tide was rising and disturbing the birds, I got onto a very good candidate only to be thwarted by a mass of Dunlin dropping all around the bird, I lost it!!

It was great to see thousands of waders out there, huge numbers of Dunlin, good numbers of Ringed Plover, Grey Plover, Redshank, Oystercatchers, a few Turnstones, Avocets, Curlews and Common Shelduck.

Our next site was a few miles up the coast at Brean Down, but unfortunately the quick and easy route was closed for roadworks so we had to drive about 10 miles around the blockage, this delayed our arrival at the Brean Down car park and guess what? We missed our next target bird by 10 minutes, yes the RING OUZEL had been showing really well just before we got there. 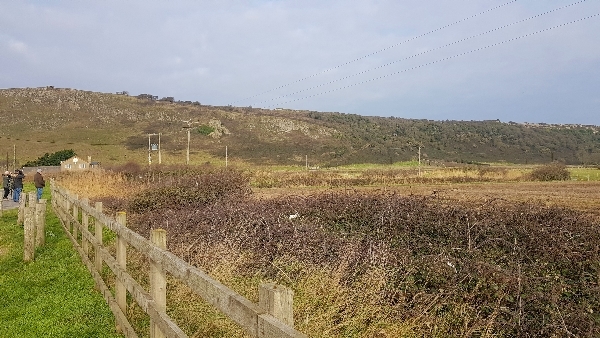 a view looking up to Brean Down from the car park

Fortunately, after 10 minutes the bird reappeared on the top of a distant bush, phew! Got that one in the bag. We then spent another hour waiting for it to return but it never did. The whole area below the Down is a huge flat plateau of pasture and arable fields with lots of caravan parks dotted along the coast, it is really quite picturesque. 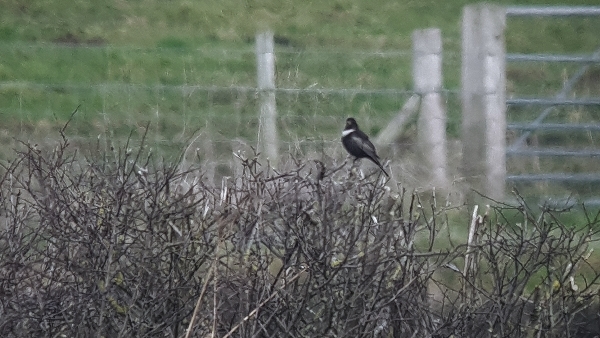 Other birds seen in the stubble field where we were searching included: Common Stonechat, Meadow Pipit, Linnet, Song Thrush, Blackbird, Chaffinch, Sparrowhawk, Common Buzzard and we had a couple of Ravens fly over. I thought I heard a Skylark calling but when I looked up I noticed a Starling was mimicking several species including the Skylark. 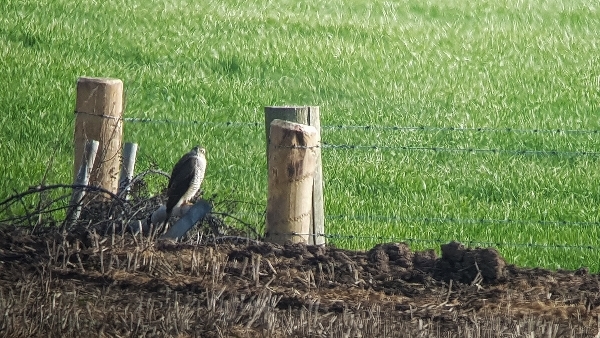 record shot of the Sparrowhawk in the stubble field

Penduline Tit was next on the list, three of these little European beauties had decided to spend the winter in a very small area known as Old Weston Airfield. The site wasn’t too far from where we were, it took about 15 minutes to get there. Nigel had been before and so he knew exactly where to park. A short walk took us along a raised bank overlooking reedbeds, open pools and clumps of seeding reedmace (Typha latifolia). 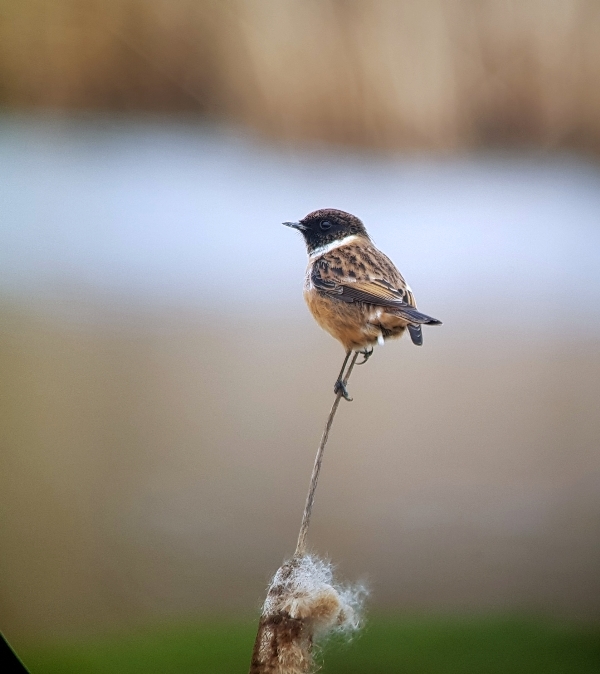 Once again we were told that the birds had just been showing but had now disappeared, surely it was just a matter of time before they were relocated? At least 8 people were scanning the reedmace continuously for at least two hours, we found Stonechats, Reed Buntings, Water Rail, Eurasian Teal, Mallard, Moorhen, Grey Heron but not the Penduline Tits.

Around 3:30pm the sun came out and bathed the reedbeds in a lovely reddish/brown glow, surely that would bring them out.

I walked to the far end of the viewing area and scoped a line of reedmace which had been neglected and there they were!!! All three PENDULINE TITS happily feeding away on the stalks of seeding reedmace. I called all the other birders and we enjoyed, middle-distant views of the little gems. 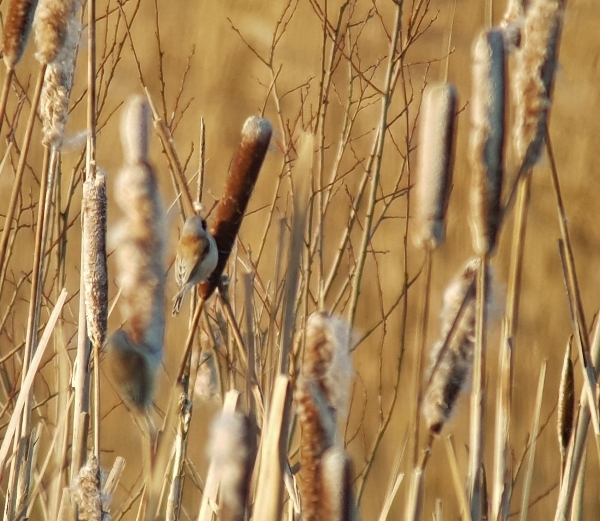 there are two Penduline Tits in this record shot, one is blurred and the other is facing away from you 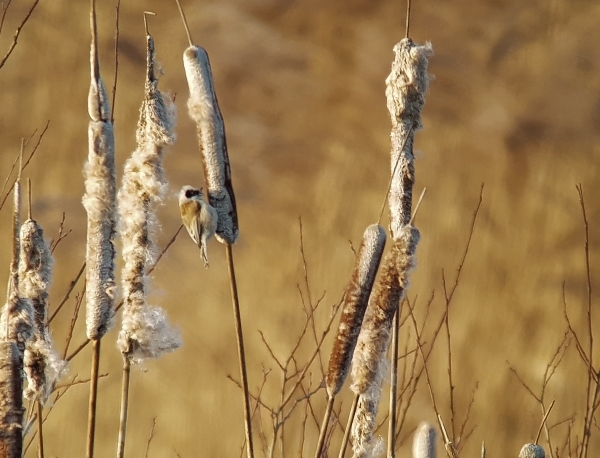 We watched them for ages and about 4:30pm we walked back to car for a final cuppa, we then intended to stay near the car and watch the local Starling murmuration which apparently is spectacular with around 30,000 birds. 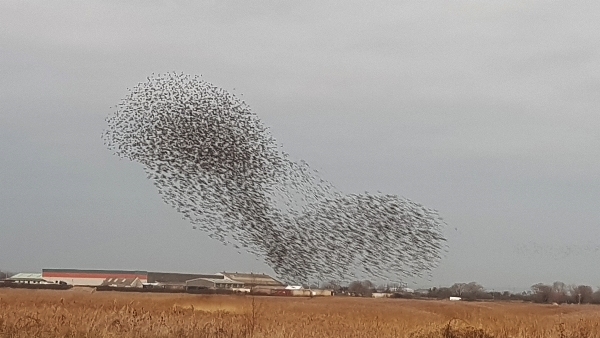 just a small contingent of the murmuration

Our wait was rewarded with a superb display by the Starlings, it got pretty exciting when a Peregrine flew amongst them and Sparrowhawk dashed below them. What a fantastic display we had, it was a great way to end our day out and even though our timing had been out today we still enjoyed some great experiences.