Our last full day and still we had a few species to find, the weather was beautiful, those cold wet days at the beginning of the tour are long forgotten now.......

We headed down to the coast to visit some heathland just inland from the beaches at Manilva, our target species were Dartford and Spectacled Warblers.

It was lovely on the heath, a nice cooling breeze, the bright sunlight brought out the best of the flowering yellow gorse and the smell was lovely. many Sardinian Warblers and Stonechats put in an appearance before we found our first Dartford Warbler. This little beauty has a very rstricted range in the UK but is quite common in several different habitats here in Spain.  Jimmy got some nice pictures of a singing male: 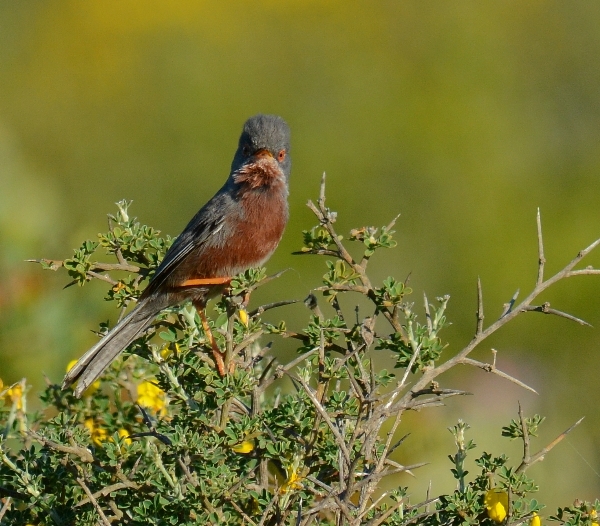 Several groups of Black Kites passed over quite low, we counted over 50 but later more passed over and I estimated that about 100 went by whilst we were there. A few Blackcaps, Crested Larks, Common Kestrel, Goldfinches, Greenfinches and Linnets made up the rest of our sightings on the heath.

Next we visited the beach area at Manilva hoping for sightings of wheatears or Whinchats. None were there so our brief visit only produced Cetti's Warbler, Blue Tit and Crested Lark. 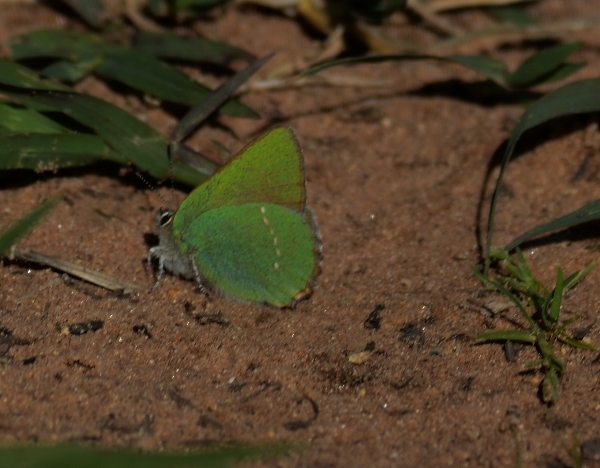 The Green Hairstreak was very common on the heath, they love the flowering gorse. We also saw lots of Spanish Festoons

For the afternoon we decided to visit another of my favourite places, the Encinas Borrachas (Drunken Oaks) track near Ronda. It was fabulous there, a lovely cooling breeze stopped us from sweltering and the light was just superb. 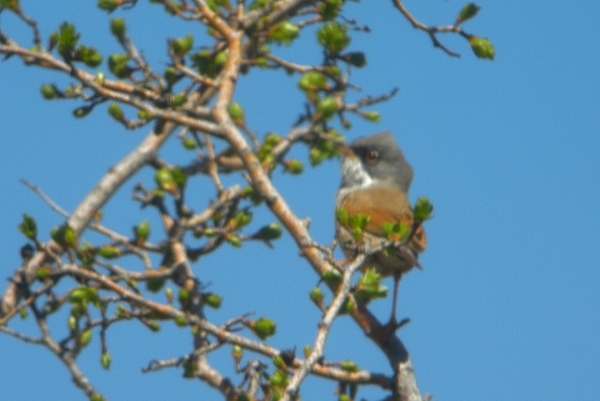 a record shot of Spectacled Warbler

We walked down to the heath and spent an hour watching both Dartford and Spectacled Warblers, both were a little elusive but we got reasonable views, Jimmy wasn't happy because they refused to sit on the top of a bush in full view! 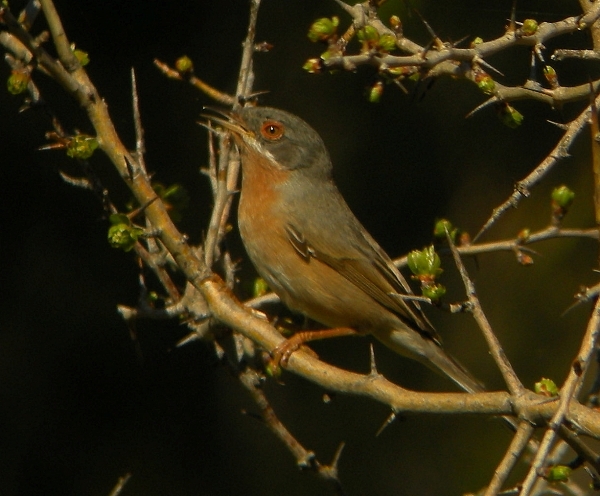 We then walked further down the track to the edge of the Oak woodland where a Subalpine Warbler gave fabulous views but guess who wasn't happy! Jimmy! there seemed to be a twig or a shadow in the way, or the bird was facing the wrong way, you know photographers have to have everything just perfect!

The walk back was just as good as when we set out, in fact we had more sghtings. Black Redstarts, a pair were prospecting a few nesting opportunities. A couple of male Black-eared Wheatears were staking out territories, Thekla Larks were singing and we had reasonable views of the local pair of Southern Grey Shrikes. A Short-toed Eagle sat on the highest pinnacle and we had distant views of both Blue Rock Thrush and Black Wheatear. Other species seen were Rock Bunting, Corn Bunting, Woodchat Shrike, Linnets, Goldfinches, Greenfinches, Chaffinches, Common Raven, Griffon Vulture and I saw another group of 3 Bee-eaters and guess who missed them?

A view down the valley, you can just make out Ronda in the distance

We finished our birding at 5pm and drove back to Gaucin for our last supper, Jimmy is heading off home tomorrow, I shall miss him and all his educational conversation, he is a well travelled man and he speaks German and French, he often translates the English names of birds into German giving an explanation of how and why the name translates as it does.

Our total species list for the trip is now 161, a superb effort, the list is enhanced by many early migrants and I have just heard that a few Nightingales have arrived locally so perhaps we can go and see them before I take Jimmy to the airport tomorrow!