A beautiful sunny day was spent on Gibraltar, we saw many raptors drift over in small groups, a flock of 52 BEE-EATERS was nice to see.........

UNBELEVABLE!! .......we drove to Gibraltar, arriving around 9am and drove straght on! not another car in sight and when we left at 2pm it was exactl the same, not a single vehicle in the queue, this has never happened before, incredible.

We drove around the east side and stopped to scan the East 'Slope' for Barbary Partridge and Peregrone Falcon niether of which had realised that we were coming to look at them! So we drove ghrough the east tunnel towrads Europa Point. We stopped just short of the Point to look at Blue Rock Thrush and Monkeys.

At Europa Point our view to Africa was slighly blighted by low white cloud/mist, the water was flat clam amd the sun was lovely and warm. However, despite these very favourable conditions not many birds were migrating, it was probable too early. We did see lots of Yellow-legged Gulls, I mean thousands, also many Northern Gannets,  we also found 3 Great Skuas and a couple of Ruddy Turnstones that sat on the rocks below us. 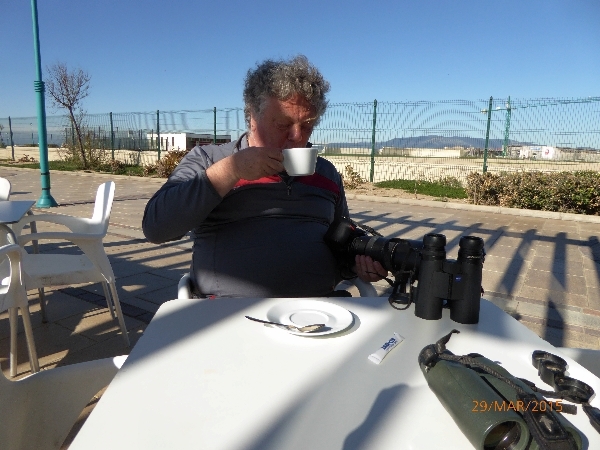 Jimmy doing what Jimmy does best..........this is the usual habitat that you will find him at 10am each morning!

At 10 am Jimmy insisted on taking onboard a dose of caffine so we sat in the warm sunlight at the new cafe at Europa Point and drank a cup or two. 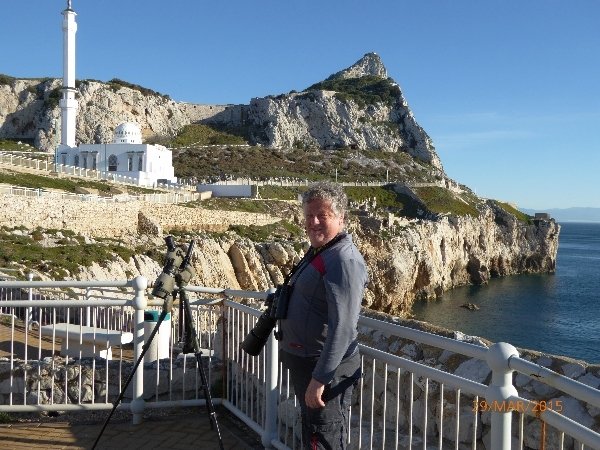 Looking back at the Rock from Europa Point.

From Europa Point we drove up to the top of the Rock and bought a couple of tourist tickets so that we could visit Jacob's Caves and the Siege Tunnel etc. 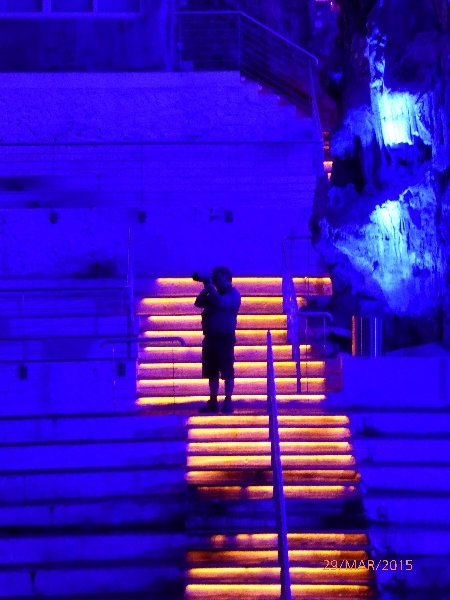 A scene from CLOSE ENCOUNTERS or Jimmy on the steps of Jacob's Cave Ampitheatre' with the new lighting system in full mode.

View from the top of the 'Rock'  -   you can see the village of Gaucin in the distant hills.

From the top we had great views of many migrating raptors, they came over in short bursts, mainly Black Kites but also many Booted Eagles and we saw about a dozen Eurasian Sparowhawks. Other migrants included Lesser Kestrels (5), Bee-eaters (52) and Short-toed Eagle |(4). 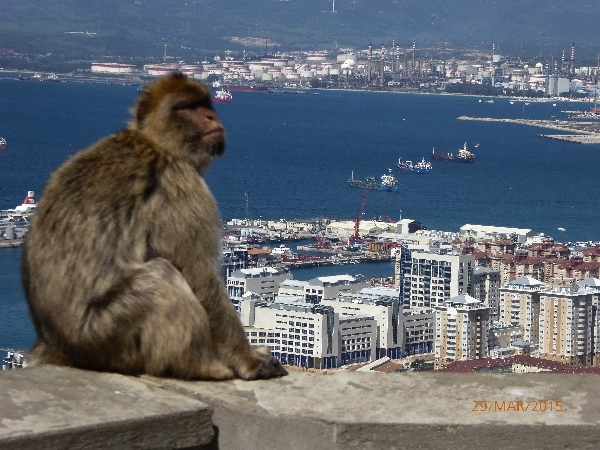 Algeciras Bay with Barbary Ape (Macaque Monkey) in the foreground 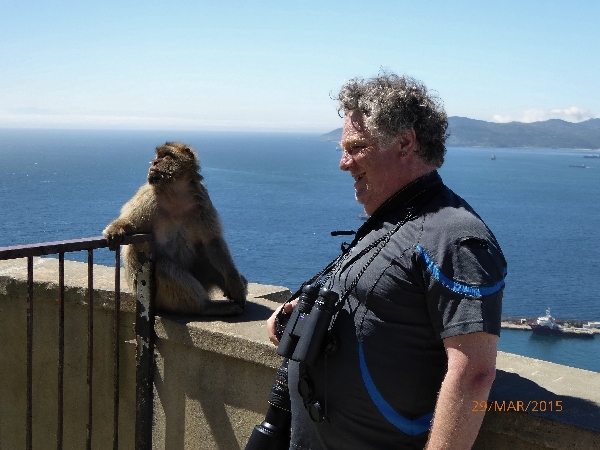 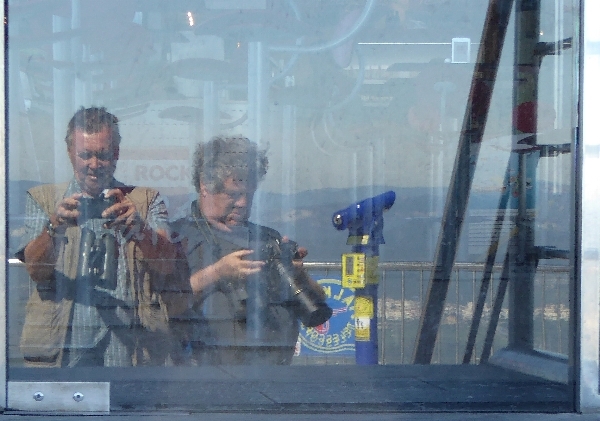 Bob and Jimmy reflecting on a day's birding on the Rock.

On the way back down we saw one of the resident Peregrine Falcons and we noticed that the gulls would vicously attack Sparrowhawks and Short-toed Eagles but left the Kites and Booted Eagles alone, strange? 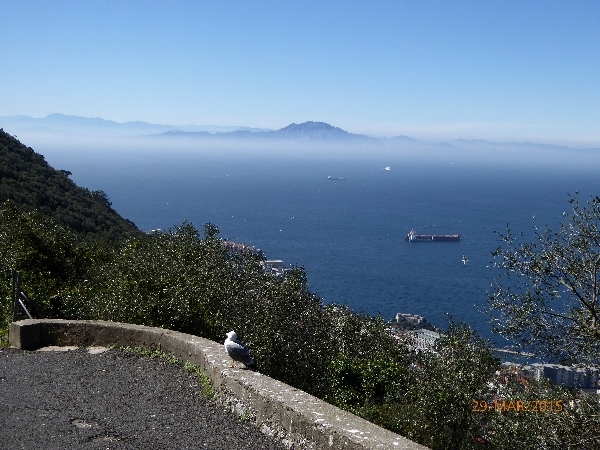 A view of the Rif Mountains of Morocco across the Strait of Gibraltar, you can see the mist in the Strait

From Gibraltar we drove back along the Guadiaro Valley and passed through San Martin then we stopped to watch a Little Owl at a farm before turning off onto to one of my favourite tracks, the Marchenilla Track. 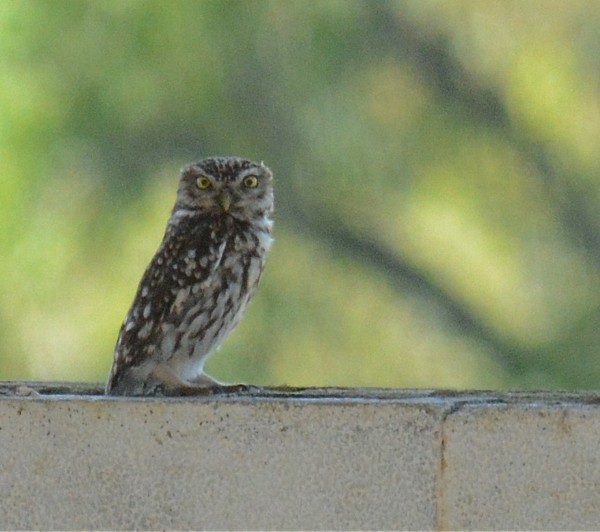 We spent a couple of hours in the late afternoon sunlight watching a host of species, I was hoping for more migrants such as Melodious Warbler and Tawny Pipit but none were there. Jimmy was happy photographing Woodchat Shrikes, Common Stonechats, Corn Buntings, Common Cuckoo and finches. I saw another flock of some 25 Bee-eaters, Jimmy missed them again! 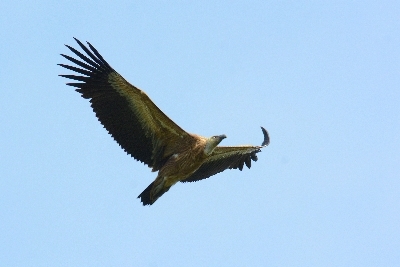 One of many Griffon Vultures (Jimmy's Picture) that flew low over us along the track, we also saw many Black Kites and a string of Booted Eagles.

We left the area around 5pm and headed off up the hill back to Gaucin, we had only 5 or so new species today but our total for the tour was rapidly approaching 160 which is very good for March!