This was our planned  'long-day' we aimed to visit Bonanza Salt Pans which are over 180kms from Gaucin, so we had an early breakfast and set off at 7:15am. Our day list started as we drove down the Guadiaro Valley towards the coast, with sightings of Eurasian Jay, Common Stonechat, Corn Bunting and Common Buzzard. From Jimena onwards we started to see White Storks with almost fully grown chicks standing on the nests, at Castellar we passed a Lesser Kestrel colony and we also saw several Griffon Vultures above the hills.

As we approached laguna Medina a jogger flushed a Stone Curlew, nice one, we then spent a lovely hour at the laguna watching about 20 species. Despite the water being fairly devoid of birds we added both Black-necked and Great Crested Grebes, Gadwall, Red-crested Pochard and Common Shelduck to the trip list. Other species seen included: Zitting Cisticola, Common Nightingale, Cetti's Warbler, Red-legged Partridge, Reed Warbler and plenty of common finches. 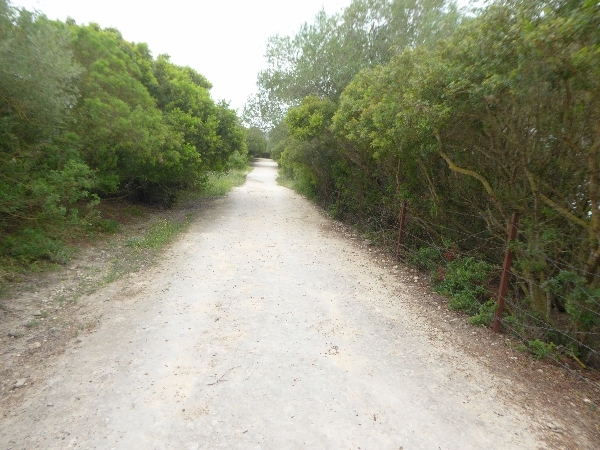 The track leading to the hide at Laguna Medina 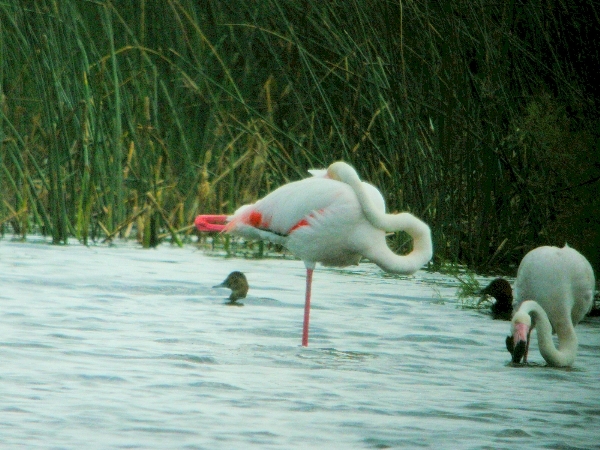 From Juncosa we drove through Sanlucar towards Bonanza, turning off the main road just north of Sanlucar. We visited a couple of small pools found by the roadside where a lot of species were found. Our prize sighting was of Little Bittern, at least three birds were present and one male flew across the road in front of us from one pool to another. Plenty of White-headed Ducks were on show, in one pool 4 males were vying over one poor female who had to keep diving to escape the unwanted attention! At a third pool we saw another 3 Little Bitterns and added Great Reed Warbler to the list, plenty of other species were in and around these pools. 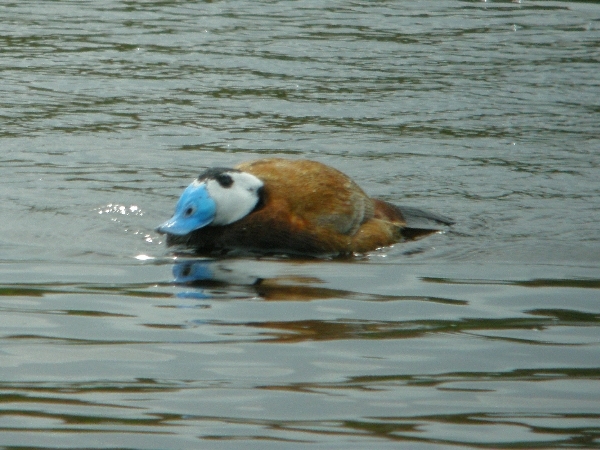 a male White-headed Duck in an aggresive posture! 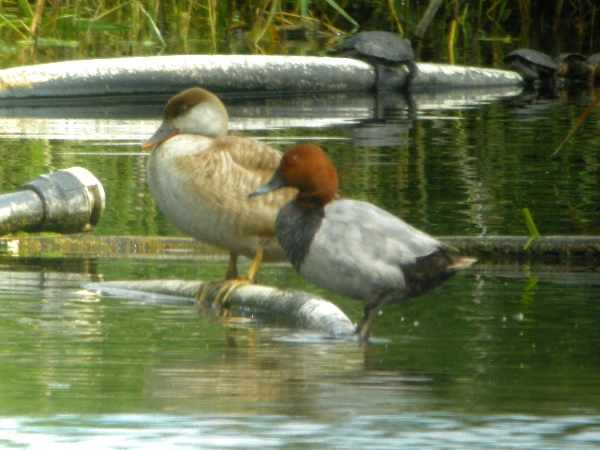 I don't know what's going on here? A male Common Pochard with a female Red-crested Pochard!

The big disappointment of the day has to the Salt Pans at Bonanza! They were full of water and not much else, of the dozen pans that are visible from the main central track two had a few Greater Flamingos in them with a few Pied Avocets thrown in! At the small pumping station where we ate our lunch we fared a little better. More Greater Flamingos could be seen with more Pied Avocets we also saw, Black-winged Stilt, Little and Common Terns but absolutely no other waders! A single Slender-billed Gull sat on a bank not far from several Yellow-legged Gulls and we found a Red Kite circling overhead. Yellow Wagtails (Iberiae) and Sardinian Warblers were seen in an adjacent salt marsh.

Laguna Tarelo also had a high level of water, no sandy islands were visible and a total of six ducks were visible, 2 Red-crested & 3 Common Pochard and a single Mallard. It was the large island that was teaming with life, it held a mixed nesting colony of mainly Eurasian Spoonbills, Little & Cattle Egrets with a few pairs of Squacco Herons, Night Herons and Glossy Ibis, it was alive with activity and space was at a premium hence many squabbles were taking place. We watched the antics of the colony from both sides of the island, first along the track that runs around the laguna and later from inside Algaida Pine Woods. 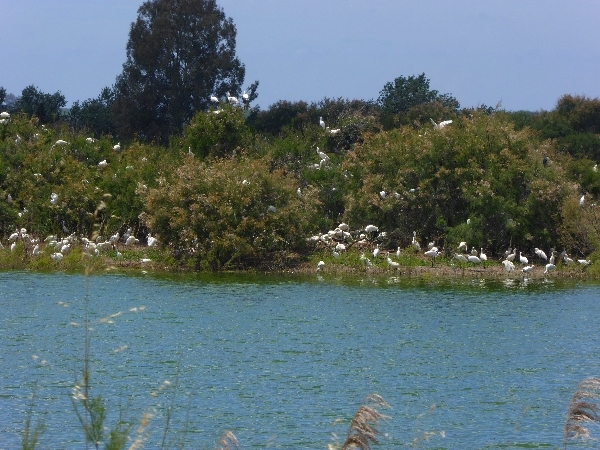 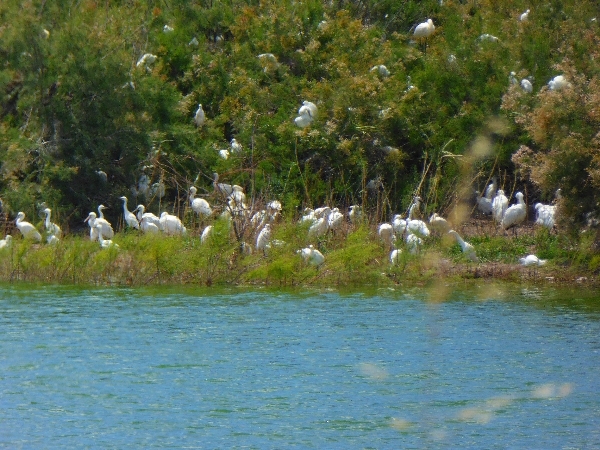 From our vantage point at the back of Laguna Tardlo we could see a few more salt pans, a couple were brimming with Greater Flamingos and we saw two more Slender-billed Gulls that flew visiting nestsome of thea lot closer than our previous sighting, but still the wader species were missing!

We left the area at 3pm and drove to Chipiona beach front to look for the rare breeding species, LITTLE SWIFT. On arrival we walked to the mariner first where on mooring platforms we saw 70+ Ruddy Turnstones, a single Whiskered Tern and about 50 roosting Yellow-legged Gulls.  The swift colony was deserted it looked as though most nests were abandoned after the young had fledged, we saw House Martins, Barn Swallows and House Sparrows visiting some of the nests. Then two LITTLE SWIFTS flew in to one of the nest, they didn't stay long and off they went. This same pair came back every 10 minutes or so, smashing we had four of the five species of swift on our list with just Pallid Swift left to see. The beach was packed with Sunday sun-worshipers and a brief scan of the sea produced nothing at all. 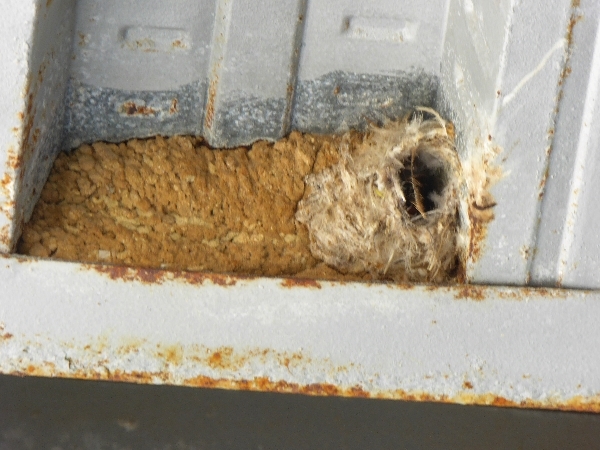 one of the LITTLE SWIFT'S nest

It was now 4:30pm and we had 180 kilometers to drive home so we set off smartish. We stopped for a coffee break after 60 kilometers and completed the journey by 6:45pm. Dinner was taken an hour later, our bird log revealed that we had seen 75 species today, normally it would be in the nineties and sometimes over 100! This low count reflects on the lack of waders at the pans and the high levels of water in all of the lagunas. We are now at a count 143 for the trip and with one day to go we may struggle to see 150 species in total!