An early start saw Dawn and I in the car by 7:10 am, it took 3hs to drive the 174 miles to Stansted, I must say that it went pretty smoothly.

This 5 day trip was provided by the Spanish Tourist Board, all expenses paid, a real jolly!  It was a promotional trip to encourage more tourism to Aragon. I met up with 5 other Tour Leaders who had also taken up the offer of this free trip. The flight was more or less on time and we met up with our guide at Zaragoza at 5pm local time. He drove us straight to oir first hotel in Gallocanta, it was dark when we got there. We saw Spotless Starling, Carrion Crow, Raven, Feral Pigeon and not much else along the way.

The Laguna Gallocanta, the sole reason why we were here - but it was dry as a bone, all you can see is salt! What a disappointment.

We had a lovely dinner and drank nice wine as we got to know one another and learn of our detailed itinerary from Alberto our guide.

Before breakfast we set out in the dark for a 30 minute drive to the far end of the dry Laguna to see the dispersal of a roosting flock of Common Cranes. They were already in the air as we arrived at dawn, we saw about 300 birds flying around making a lot of noise before they flew off. We also logged two Little Owls. 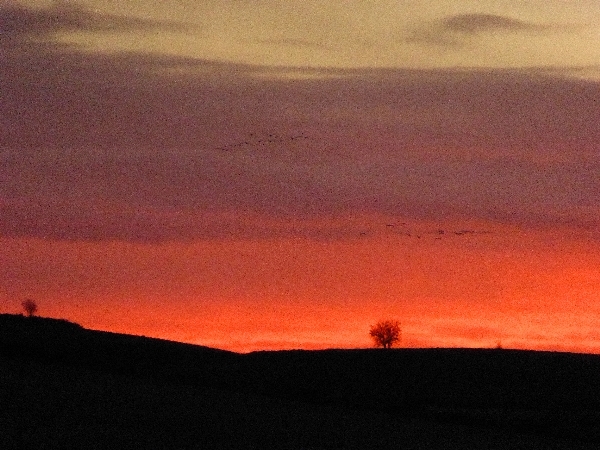 believe it or not, there are Common Cranes in this picture!

On our return to the village we stopped once more to view the huge area where the lake should have been, it is just a salt-flat at the moment. But, we saw a few species around the edge such as Black Redstart, Meadow Pipit, Rock Sparrow, Carrion Crow and Collared Dove. In the car park at the hotel 3 Hawfinches flew over and we logged Greenfinch.

We set off at 8:30am and headed for the pseudo-steppe around Belchite, Javier from the hotel joined us and led us to our first stop in the village of Puebla de Arbotan. We listed Red Kite, Common Buzzard, Common Kestrel and Raven along the way. 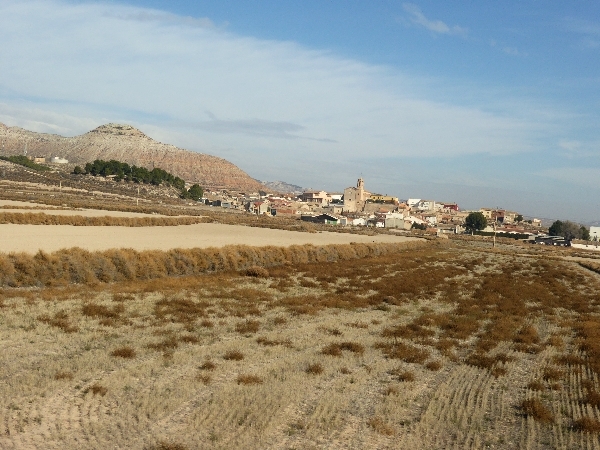 At the Village we were joined by Ricardo, a local guy who is working for the Medio Ambiente, monitoring the Environmental Impact of use of water in the area. He knew his birds, so now we had three guides and we spent two hours with them making our way across miles of track through the steppe. We saw lots of Stonechats, Dartford Warblers and had splendid views of a pair of Golden Eagles, we also had distant flight views of Black-bellied Sandgrouse. 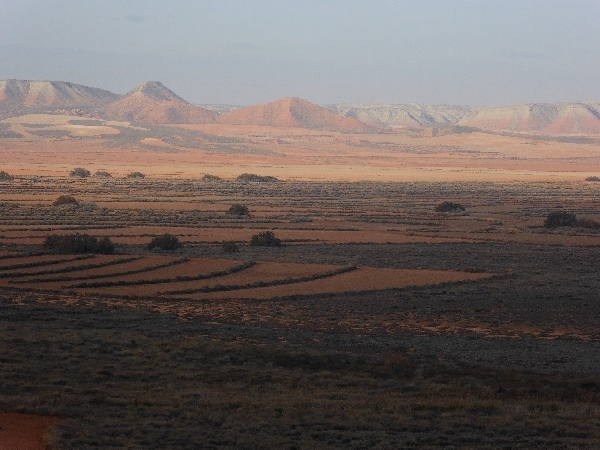 The amazing view we had at lunchtime at El Planeron

Larks were everywhere, especially Calandra Larks, large flocks were seen regularly, also Lesser Short-toed Larks, Crested, Thekla and a few Skylarks. Little Owls seemed to be on every derelict building, flocks of Linnets, Corn Buntings and Spotless Starlings made up the rest of our sightings.

It was 1pm by the time we reached the nature reserve El Paneron, famous for Dupont’s Lark. We stopped abruptly at the entrance to watch 8 Black-bellied Sandgrouse but unfortunately they were spooked by a couple of Eurasian Magpies. On the reserve we drove a short way to a high point where we parked and ate our picnic lunch.

During this stop we added Marsh Harrier, Iberian Shrike and a small covey of Red-legged Partridges, after lunch both Javier and Ricardo left us as we continued towards the mountains. We passed through Qinto and at Sastago we collected our fourth guide Marcos. He led us to the bridge over the river Ebro on the far side of town. We notched Grey Heron, Great Egret, Great Cormorant and another Red Kite. 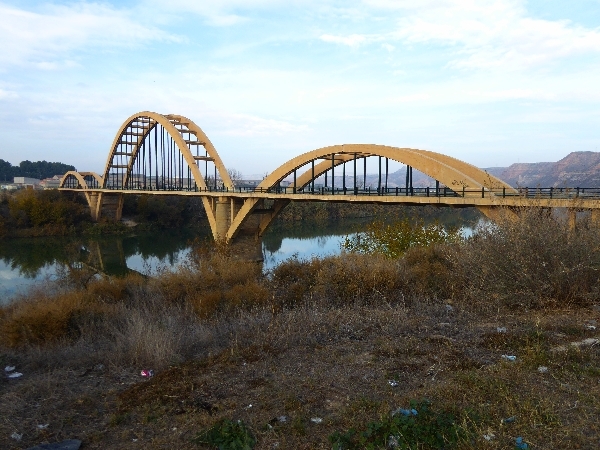 The bridge over the River Ebro at Sastago

Marcos led us straight into a shallow gorge to where a Black Wheatear was waiting for us, very nice. From there we drove some 20km out onto another area of pseudo-steppe where we spent the last 3 hours of daylight.

It was fantastic out there, the light remained fairly good in a temperature of 16C. We saw some great birds and a very exciting surprise! A party of eight Great Bustards was superb, regular sightings of Black-bellied Sandgrouse was also nice, more Marsh Harrier sighting s were made and we added Red-billed Chough and a Merlin to the list.

Great Bustards on the steppe near Bujaraloz

It was as we were getting ready to depart when two birds appeared, first a Wheatear species was found and then a male Hen Harrier drifted over. The wheatear got all the attention because it was November after all. We soon decided that it was a very late migrant Black-eared Wheatear but on closer inspection we realised that, in fact, it was a DESERT WHEATEAR, a rarity for Spain. We took some photos of it and put it out on Rare Birds of Spain website. 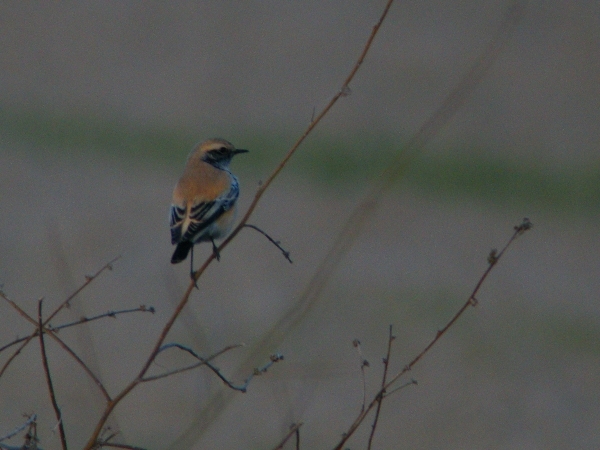 record shot of mine, in bad light, of the Desert Wheatear

After that great excitement we left the area at 6pm, it took two hours to get to our next guest house up in the mountains. Dinner was taken late, around 8:30pm. Marcos joined us for dinner.