WEATHER: Cloudy, some sunshine, hot and humid pm. With some rain. Temp 20-25C

Before breakfast most of the group were up and out for 6am for a walk around the grounds of the cottages, the dawn chorus was incredible with the song of the Grey Shrike-Thrush winning the top spot for the most tuneful. 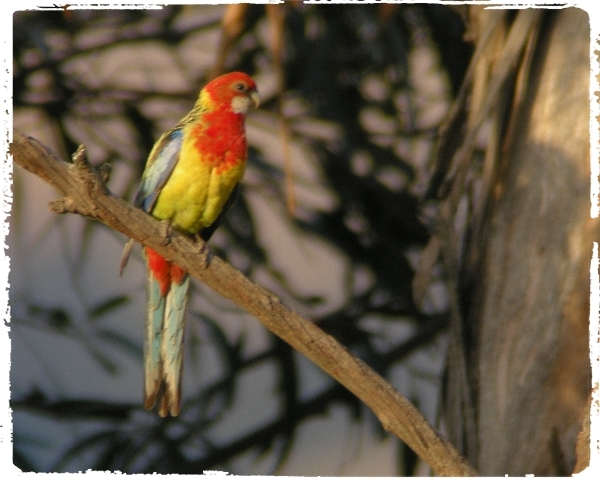 We quickly found many species flitting in nearby flowering trees, Noisy Friarbirds and White-plumed Honeyeaters were the most common. We then added two new species to our list in quick succession and both of them were Thornbills. First we found a small flock of Yellow-rumped and then Yellow Thornbills appeared not far away. 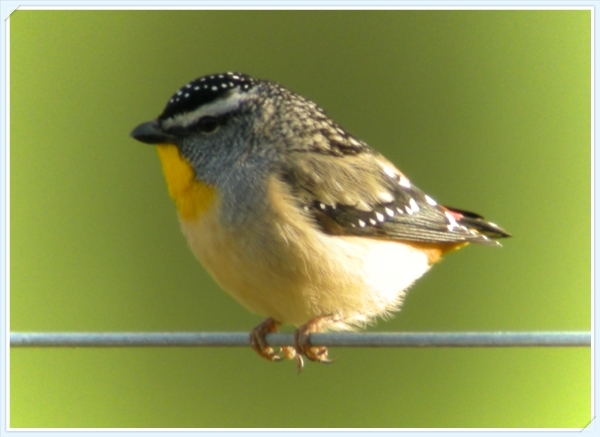 The landscape around the cottages consisted of flat pastureland that stretch for miles, divided by tree hedges, ditches, streams, fences and scrub. Woodland sat all around at the base of steep volcanic rocks forming high 100 meter-high escarpments in three directions. 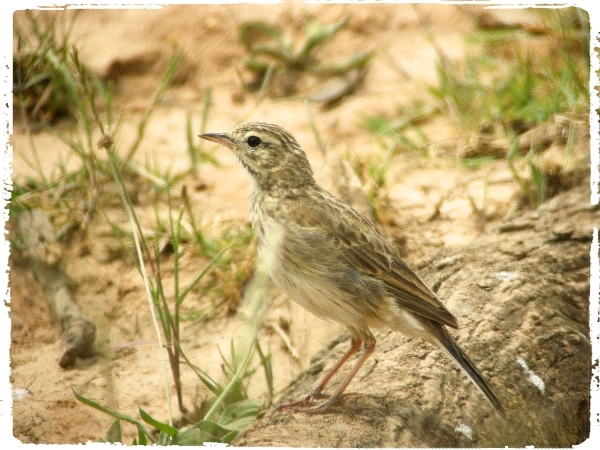 We walked along a track to the north stopping many times to watch a number of species, Eastern & Crimson Rosellas, Musk & Rainbow Lorikeets, Sulphur-crested Cockatoos, and a large number of black and white birds which included;  Magpies, Ravens, Choughs, Butcherbirds, Magpie-Larks and Willy Wagtails. A Jacky Winter was new to our list and we watched White-headed Herons feeding young at their nest.

After breakfast we drove a short distance to the Glen Davis campsite, our walk there produced very little except lots of White-Plumed Honeyeaters, House Sparrows and Brown Treecreepers. 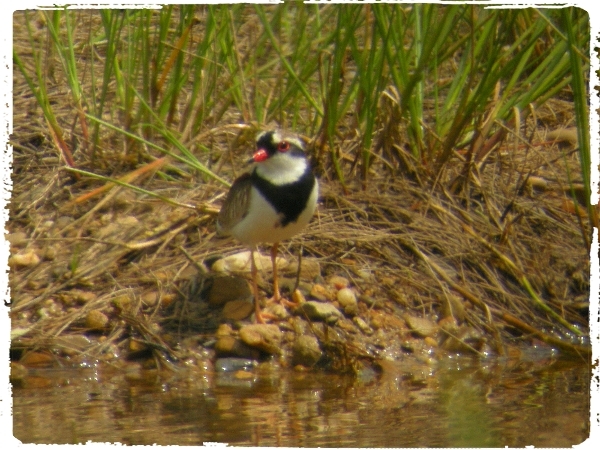 For the rest of the morning we re-visited sites that showed potential from yesterday’s fleeting visit, at the Capertee River we watched Red-rumped Parrots but not the Turquoise variety we had hoped for. We did see a Peregrine Falcon and we added Diamond Dove to our list of doves.

An avenue of Eucalyptus where a watering hole was situated was our next venue, Rob had seen several finches in the area on previous visits, today it was quiet to start with. We enjoyed the antics of the Dusky Woodswallow  and found a beautiful Satin Flycatcher, a very distant Brown Falcon sat on a dead tree whilst a Nankeen Kestrel hovered nearby. 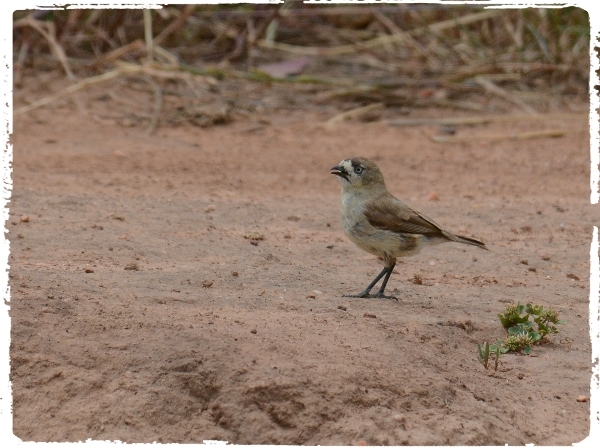 Then we found a Diamond Firetail, what a stunning bird, this sighting was quickly followed by good views of Common Whiteface (another seed-eating finch-type species) then a pair of Zebra Finches appeared – how wonderful it was to see these beautiful birds free-flying and not in a cage somewhere in Europe!! Well the cameras were getting hot after those sightings. 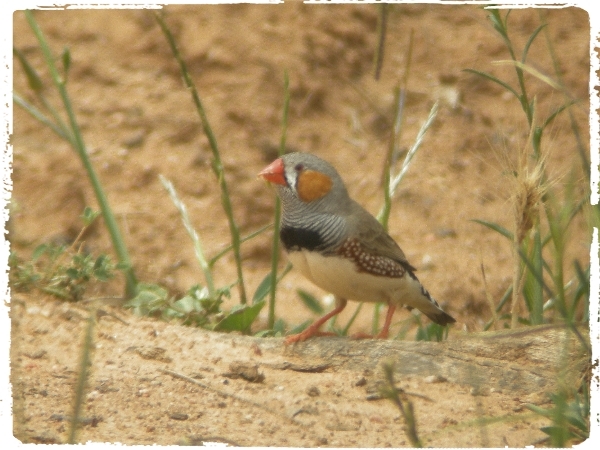 For lunch we drove a few kilometers further north to a chapel and a graveyard where we enjoyed some sunshine as we ate our picnic in a nearby park. The first bird we saw was a new species for our list, the Streaked Honeyeater, another beauty in this incredibly large genus. The subsequent walk in the surrounding woodland failed to produce much at all, the birds of interest were the very showy Brown Treecreepers and a Sacred Kingfisher until we returned to the road. We then found another Diamond Firetail and to our great delight a Plum-headed Finch turned up, this bird remained elusive until it flew towards us and land on a wire not 5 meters from us, amazing! 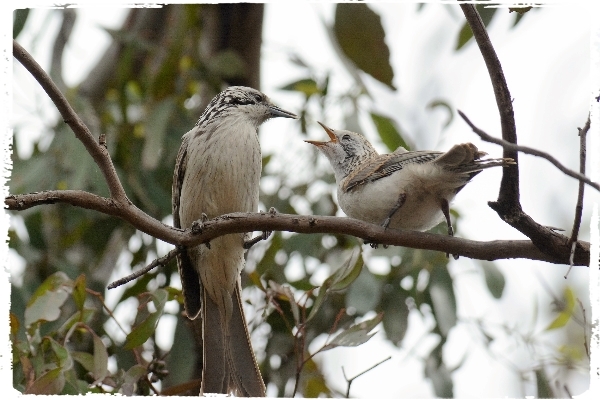 Another thunderstorm was brewing in the distant sky and it grew darker overhead so we made a hasty retreat back southwards. We managed a little birding before the rain came down, walking along a track where we listed Brown Songlarks, Rainbow Bee-eater and we watched Red-rumped Parrots coming down to drink from a puddle but we had to abandon our walk rapidly. 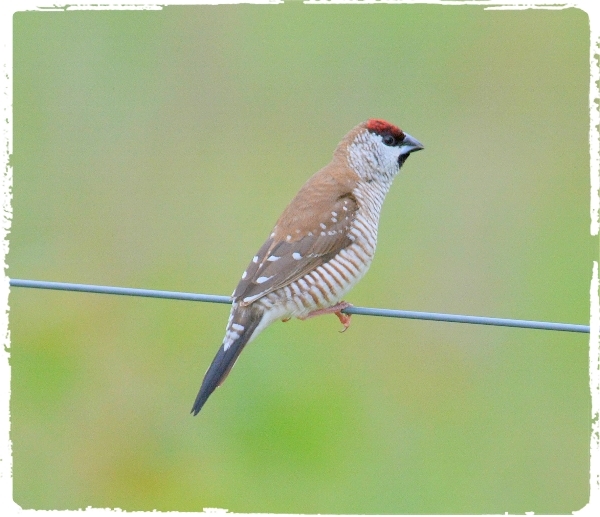 Our return to our cottages took about an hour where we sat out the rainstorm whilst enjoying a nice cuppa. At 4pm some of us made our last birding excursion of the day, we drove to another camp-site about 4km from our cottages. It was amazing to see so many Kangaroos out in the fields and in the camp site. We also saw Rabbit, Red Fox, Swamp Wallaby and Red Wallaroo.

We walked along the river bank scanning the rocky woodland on the opposite bank for Rock Warbler without success. Eastern Yellow Robin, Fan-tailed Cuckoo, Silvereye, Yellow Thornbill and large numbers of Sulphur-crested Cockatoo was most of what else we saw. 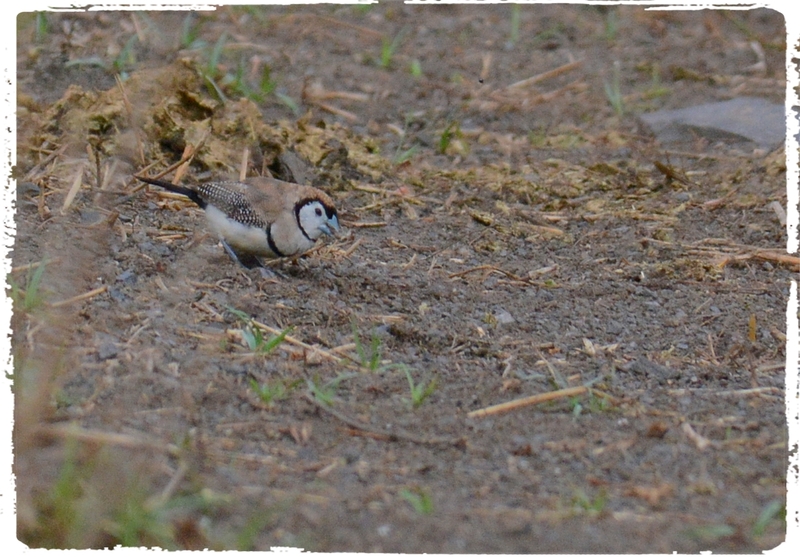 For dinner we drove 35km to Capertee Village and found everything closed! So we then drove another 43km to Lithgow and found good food there. We drove back in the dark and with great caution because of the high number of Kangaroos hoping across the road. We saw several Red Foxes and the much hoped for Wombat but no Owls. We got home at 10:45pm it had been another long day especially for Rob our driver.